UST futures are weaker this morning after yesterday's losses, which were spurred on by some stronger-than-expected US data and hawkish Fed and ECB commentary. Further weighing on the market is the fact that the US Treasury has now reached its debt limit and was forced to announce the use of special measures yesterday to avoid defaulting on its debt obligations. It is, however, not the first time such measures have been used, and it is likely that they should keep the Treasury going with its debt obligations until the July-August window.

Even with the losses over the last two days, USTs are still up on the week following the strong rally on Wednesday. The market is fading its expectations that the Fed will extend its hiking cycle beyond 5% this year as it appears that the economy will not be able to withstand such high interest rates.

Kenya: In a draft budget document, National Treasury said that limited access coupled with an illiquid international market may hinder the government's plans to refinance its 2024 sovereign bond maturities. Meanwhile, National Treasury plans to boost budget spending by 7.4% to KES 3.6trn, and as part of the economic turnaround plan, revenue collection will be scaled up to KES 3trn ($24.2bn) in 2023/24 and KES 4trn over the medium-term. A fiscal deficit of 4.3% of GDP in 2023/24 is forecast, and National Treasury expected the deficit to be financed by external funding of KES 198.6bn ($1.60bn) or 1.2% of GDP and domestic borrowing of KES 496.6bn or 3.0% of GDP.

Democratic Republic of Congo: In an extensive interview, Finance Minister Nicolas Kazadi said that the DRC sees an agreement on overhauling $6bn of an infrastructure-for-minerals deal with Chinese investors this year. Kazadi added that the government is in active talks with representatives and also expects to reach an agreement by April for financing up to $1bn from the IMF's Resilience and Sustainability Trust. The DRC is also in talks with its financial advisers on the possibility of tapping international debt markets, specifically using debt linked to rainforest preservation efforts, so-called green bonds.

Morocco: Head of the monetary and foreign exchange at the central bank, Younes Issami, on Thursday said that Morocco is considering selling dollar-denominated bonds for the first time since 2020, turning to the bigger foreign market to finance state coffers. According to Issami, authorities are “monitoring the international market for a potential sovereign bond issue this year.” Issami added that a bond sale might ease the liquidity strain in the domestic debt market. He, however, stopped short of disclosing how much the state might seek to raise.

Nigeria: The latest Central Bank of Nigeria data shows that the Nigerian naira redesign is reducing Nigeria's pre-election cash surge. For the first time on record, cash in circulation in Nigeria has fallen ahead of the elections following the CBN's decision to redesign high-value notes. In November, the amount of currency circulating in the economy declined 4% to NGN 3.16trn ($5.6bn) from October. That data bucks a trend common with all six elections the country has held since democracy returned in 1999. Money in circulation jumped ahead of each of those polls due to increased campaign spending in the cash-dominant economy. This suggests that some excess cash may be going into the banking system while CBN cash limits are encouraging electronic transactions. Reducing cash in circulation could help mitigate some inflationary factors by decreasing available money supply.

Ghana: The Paris Club on Thursday announced that it is working on setting up a joint committee of official creditors, made up of Paris Club and non-Paris Club members, to start Ghana's debt restructuring. Non-Paris Club G20 countries such as China, India, Saudi Arabia, and Turkey are also committed to joint talks. Official creditors will engage with private creditors after forming a committee, and the Paris club is aiming for a quick process, but it depends on non-Paris Club creditors as well. According to the Paris Club, Ghana's debt treatment case under the Common Framework will not be as complex as Zambia's.

Senegal: The International Monetary Fund has approved funding for Senegal to aid its economic recovery. Specifically, the lender agreed to disburse $216mn to Senegal as the country's fiscal accounts are under increasing strain, and it has been affected by weaker external demand, rising food and energy prices, tighter financial conditions, and the dollar appreciation. Senegal's growth forecast for 2022 was cut to 4.7% from 5%, and the lenders project an expansion of 8.3% this year and 10.4% in 2024. According to the IMF, medium-term growth prospects appear more favourable, with oil and gas production set to start late this year.

Forex: West African currencies mostly weaker at the start of 2023

It has been a difficult start to the year for currencies in the West Africa FX complex against the USD. For context, when looking at the four Western African currencies tracked by ETM, the Egyptian pound, Ghanaian cedi, and Congolese franc, have all recorded losses. Meanwhile, the Nigerian naira has bucked the weakening trend. The cedi and the pound are also the worst-performing currencies out of the 23 tracked by Bloomberg, having recorded double-digit losses so far. The pound has weakened on the back of two devaluations this year as authorities move to a more flexible exchange rate system and aim to address the worst foreign exchange crunch in half a decade. 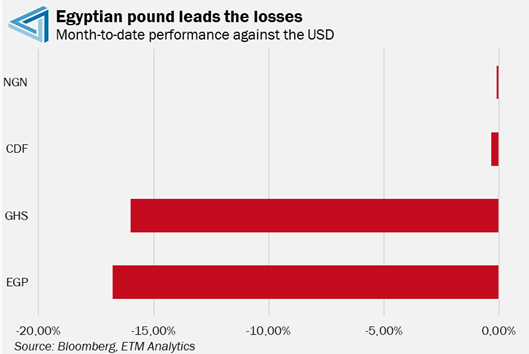 After rallying by almost 30% in December following the announcement of a preliminary IMF deal, the cedi has weakened notably and erased half of those gains. The cedi has come under renewed selling pressure amid uncertainty over debt restructuring and limited foreign exchange inflows against a backdrop of heightened dollar demand. In the near-term, the cedi could weaken further if negotiations on the debt exchange program do not lead to a fruitful outcome.

The naira, meanwhile, has been relatively unchanged, with central bank interventions supporting the currency to some degree. That said, the naira remains significantly overvalued on a real effective exchange rate basis, keeping the premium with the parallel market rate sizeable. We, therefore, see risks of a devaluation this year, although this is only likely to materialize after the elections in February.

Global bonds have had a strong start to the year, with yields sliding across the core and emerging markets as investors price in weaker growth outlooks, easing inflation pressures, and less hawkish central bank policy outcomes. One major exception to this has been Japanese bonds, which have had a volatile period since the surprise BoJ decision in December and initially weakened quite significantly in the early stages of January before rebounding following this week’s MPC announcements. Japanese bonds are, therefore, roughly flat on the year so far. However, yields in the Asian nation are still well below many of their global peers, with the benchmark 10yr trading below 0.5000%. 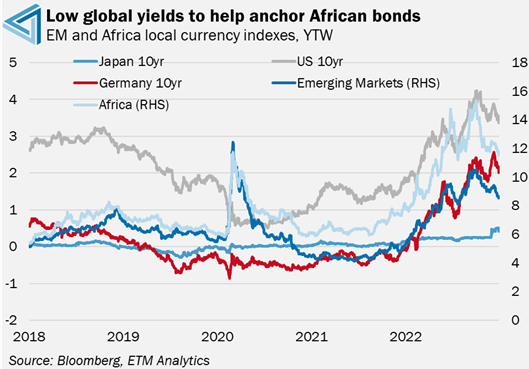 When investors were pricing in a possible second shift in the BoJ’s yield curve control policy, the fear was that a major dislocation in the market would have ensued as Japanese funds would have exited the likes if the US, European, and UK bond markets due to higher local yields. The fact that the central bank opted against any further policy tweaks at its January meeting suggests that yields should remain anchored for now, alleviating pressure on the global bond markets.

Japanese investors may be less exposed to African bond markets than they are to those in the US and Europe. However, lower yields in Japan will still provide some support to the African debt market. Those willing to handle the risks of Africa will be rewarded with high yields and strong carry returns owing to the low borrowing costs in Japan.

Macroeconomic: As inflation has started to ease, economic growth in Africa should stabilise

According to the African development bank (AfDB), Africa’s economic growth will stabilize at around 4% over the next two years. Globally we have started to see a pullback in inflation, and we are slowly starting to see this in Africa as well. Lower inflation and the rebound from the pandemic-induced slump and external shocks, including the Ukraine war, has allowed for growth within Africa to start stabilising. 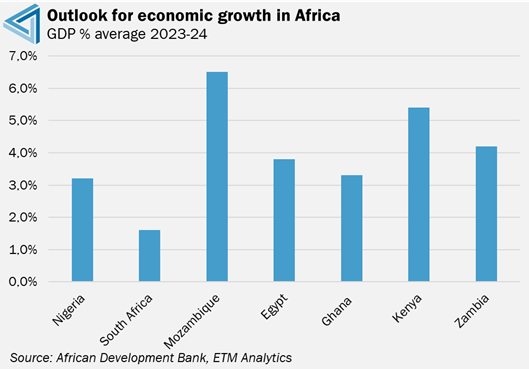 The fastest growing economies in Africa are expected to be Mozambique and Senegal as a result of increased revenues and investments into large natural gas projects. Since the Russia-Ukraine war gas prices have soared and the EU has had to look to Africa to fill its gas needs, therefore we expect to see investment into gas projects in Africa continuing to grow in the coming years. According to AfDB, Senegal is projected to see its economy grow 10.2% in 2023 with Mozambique expanding 8% by 2024.

Africa’s two largest economies, Nigeria and South Africa, are expected to be a bit of a drag on the continent's growth as structural headwinds within these countries weigh heavily on their growth. However, the AfDB has cautioned that the improvement in Africa's economic conditions remains fragile, as the number of African countries in debt distress or at high risk of it has increased substantially since the start of the pandemic.