US Treasury yields had a bit of a rally yesterday following the release of the latest FOMC meeting minutes, which confirmed the Fed’s intent in fighting inflation. The 10yr benchmark yield rebounded to pare all of the losses seen on Tuesday, while the 2yr yield rallied to test the 3.000% level, bear flattening the curve further and taking the 2v10 spread even more negative. This morning, we are seeing a bit of a rebound for USTs, with yields paring some of their gains from yesterday. Given the lack of market-moving data out of the US today, focus will turn back to the weakening growth story, while investors will wait for comments from Fed officials Waller and Bullard later in the session. If they remain as hawkish as they have been recently, we could see the bear flattening bias extend, which could put risk assets under pressure again.  Meanwhile, the German yield curve is steepening as traders pare their expectations for rate hikes from the ECB.

Africa: Speaking yesterday, the CEO of the Nairobi Securities Exchange said that ten African countries are set to begin cross-trading in listed securities in October. According to the CEO, ten African stock exchanges have joined a digital platform that enables the purchasing and sales of listed equities and debt instruments. Some of the countries that will participate in the cross-trading include Egypt, Ghana, Botswana, Kenya, Nigeria, and Morocco. The cross-trading is seen as promoting liquidity of stock exchanges in the continent as the region will be seen as a single market. The CEO added that all settlements would happen in the local currencies in order to reduce costs associated with the conversion of funds into foreign currency.

Botswana: The main takeaway from a report yesterday by the International Finance Cooperation and World Bank titled: Botswana Country Private Sector Diagnostic was that Botswana could transform its economy, create employment, reduce inequality and achieve a resilient recovery from the coronavirus pandemic by increasing private sector participation and investment in its energy, water and sanitation, tourism and other sectors. The report added that while Botswana has implemented many favourable investment policy measures that have contributed to significant investments in infrastructure, education, health, and social protection, there is still room for improvement to boost human capital indicators, create jobs, and reduce inequality which remains among the highest globally.

Morocco: The World Bank, in a report, has warned that higher inflation and increasing non-subsidised goods prices such as fuel would lead to an increase in the poverty rate in Morocco to between 1.1 -1.7%. The lender added that the regressive subsidies introduced by the government only serve the rich, widening inequality, and are harming the fiscal status of the country.

Nigeria: Six of the eleven firms that distribute more than half of Nigeria’s grid power have been taken over by Nigerian regulators and banks after they failed to pay their debts. Nigeria has struggled with unreliable and inadequate energy supply, and the emergency interventions at the six firms are the latest setback to an almost decade-old program to privatize the power industry. According to the government’s statistics agency, the half dozen firms in financial distress accounted for almost 60% of the power supplied to customers and more than half of the revenue generated from electricity sales in 2020. The looming electricity crisis is dampening Nigeria’s growth outlook.

South Africa: In a move that could severely hamper regional trade and result in considerable costs to importers and exporters, protestors in a city in South Africa's northeast blocked roads, including a key route linking the country to Mozambique, with trucks Wednesday as they demonstrated against pump prices rising to a new record. The road between Mbombela, 350 km east of Johannesburg, and White River was obstructed by parked Trucks, as well as the N4 highway connecting the city to the border with Mozambique and the port of Maputo. Gasoline and diesel prices in South Africa surged to a fresh all-time high Wednesday on rising oil costs and as the government trimmed a temporary reduction in a fuel levy.

Egypt: Egypt's cabinet minister has indicated that the country's wheat stocks are sufficient for seven months. Over the past week, Egypt has booked more than 1mn tons of wheat, taking advantage of a dip in global prices with Chicago futures erasing gains made since Russia's invasion of Ukraine. Wheat prices have been recently pressured by concerns that an economic slowdown will dent demand for commodities.

Oil: The front-month Brent futures contract had a look below the $100 per barrel handle yesterday but has managed to hold just above this key psychological level despite losing around 9% this week. WTI is trading just above $98 per barrel as the dollar continues to surge and recession fears continue to grow. Adding to the downside pressure was the API report out yesterday, which showed a build of 3.8mn barrels for US stockpiles, which included an increase at the key storage hub in Cushing.

With the USD extending its advance yesterday on the back of persisting global recession fears and expectations of higher interest rates, it is worth looking at the dollar from a fundamental perspective. The USD is overvalued, more strongly against some currencies than others, but on the whole, is trading in overvalued territory against most currencies, and it almost does not matter over which time frame a mean reversion study is conducted. 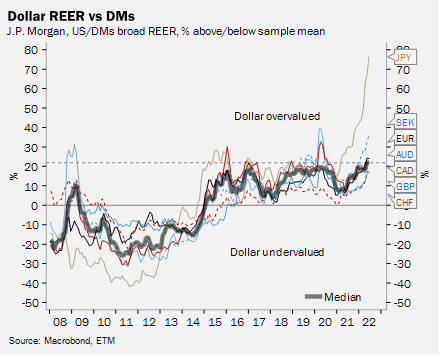 Investors globally have traded on the US Fed’s policy divergence and anticipated the USD to appreciate for so long as the Fed was being more hawkish than the rest. That argument has held for some time now, but going forward, things may change. The global economy is headed for a slowdown. US bond yields are heading lower, and the shape of the US yield curve is flattening to point to a potential recession.

It would signal a departure from normal behaviour if the Fed were to continue hiking in the face of recessionary conditions that would negatively impact employment. It, therefore, follows that investors are now starting to look through the current inflation cycle to a point where the Fed will soften its stance. Given just how much has been priced into US rates and the strength of the USD, it is the USD that would have the most to lose and which is arguably the most vulnerable major currency. Once investors start to price in the realisation that the Fed might struggle to hike in line with its guidance, we are likely to see the USD unwind some its gains, potentially providing some relief for emerging market and frontier market currencies that have broadly come under pressure recently.

While African bonds have come under significant selling pressure this year amid the tightening in global monetary policy and deterioration in risk appetite, the losses in African bonds have been modest compared to emerging market bonds. Since the start of the year, the JP Morgan EMBI has dropped by more than -18%, while the Bloomberg Africa Bond Index is down by a lesser -7.2%. 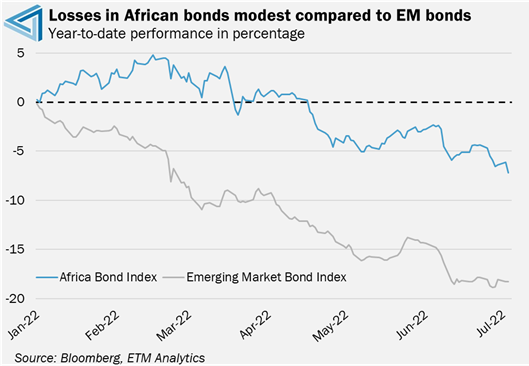 Interestingly this has been the case over the past two years as well, with the emerging market bonds returning gains of 3.7% in 2020 and losses of -1.6% in 2021 compared to positive returns of 10.25% in 2020 and 2.0% in 2021 in African bonds. This implies that not only have African bonds outperformed during the pandemic, but they have also been more resilient to the deterioration of global risk appetite and tightening monetary conditions.

That said, it must be noted that African bonds are often bought and held through to maturity due to the thinner liquidity conditions. Therefore, African bonds are less susceptible to fast money funds rotating out of higher beta assets into haven assets.

The attractive yields on offer in Africa and the thinner liquidity conditions relative to emerging markets suggest that African bonds may continue to be partly shielded from the adverse global conditions. That said, we expect the broader bearish bias to remain intact in the months ahead until there is a change in the path of monetary policy from major central banks or a marked improvement in global risk appetite.

After months of communicating that it would not seek assistance from the IMF, Ghana officially started talks with the IMF on Wednesday. Ghana is seeking a loan to restore macroeconomic stability and safeguard debt sustainability within the country. Ghana has been battling to stabilize debt that has grown to 78% of GDP at the end of March. 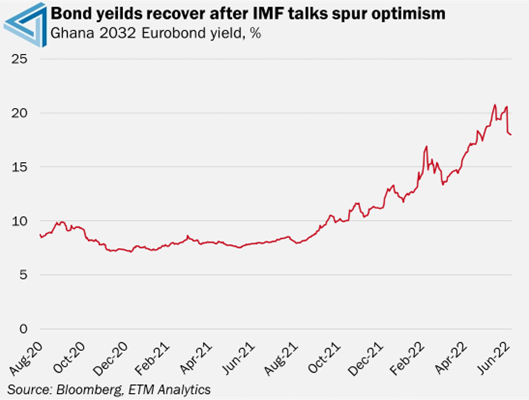 Fiscal risks in Ghana have been on the rise for some time now. However, since September of last year, the pace of fiscal degradation has intensified, partly due to the rise in global interest rates and deterioration in global risk appetite. In recent years, Ghana has financed a significant portion of its budget shortfalls through the issuance of Eurobonds. However, due to interest rates rising, it has become too expensive to raise debt in the international bond market, effectively pricing Ghana out of the Eurobond market. Ghana is now having to look for alternative sources of finance.

Ghana’s 2032 bond yields have declined significantly since the announcement of the potential IMF loan. This indicates that there is some optimism surrounding the IMF talks. Investors are optimistic that should the IMF approve funding for Ghana, the program would be accompanied by the implementation of prudent fiscal measures.

Adding to the notion that sentiment in Ghana has improved, it seems that the announcement of the IMF talks has capped some of the losses in the Ghanaian cedi. Since the USD has surged to new highs in the last few days, there has only been a slight weakening in the cedi. This suggests that the IMF talks have been providing some support to the local currency.