Limited number of sovereign defaults so far in 2021 defies expectations

Over halfway through the year we take stock of sovereign bond defaults so far, as an update to our sovereign defaults in 2020 piece published in December (see here).

After a challenging 2020, it is fair to say that the rush of sovereign defaults that was feared just several months ago, given the impact of Covid on emerging markets, and especially frontier and low-income economies, has not materialised. Indeed, the two default cases we do identify this year were also among those who defaulted last year, so there are certainly no new countries that have defaulted so far.

Of course, one has to define what we mean by default. We look specifically at defaults on eurobonds (hard currency foreign law bonds). We take two definitions – the obvious being payment default, and an alternative using consent solicitation to defer payments on the bonds.

There have been no hard (payment) defaults so far this year if contractually agreed payment deferrals are excluded (although Suriname's position is now less clear cut given a dispute with bondholders). This compares to four last year on our count (Argentina, Ecuador, Lebanon, Zambia), or five depending on how we classify Suriname's second default event last year.

Alternatively, if we include episodes of consent solicitation to defer payments, we count two cases of sovereign default this year, Belize and Suriname. Both launched new consent solicitations this year and, moreover, each stated their intention to seek a restructuring involving significant PV reduction. That said, whether they are “new” or just continuing cases is debatable.

This compares to a modern record of six countries defaulting last year, under this broader definition which includes consent solicitation (namely Argentina, Belize, Ecuador, Lebanon, Suriname, and Zambia), although we don’t think the pandemic is to blame for them all, as we noted at the time. 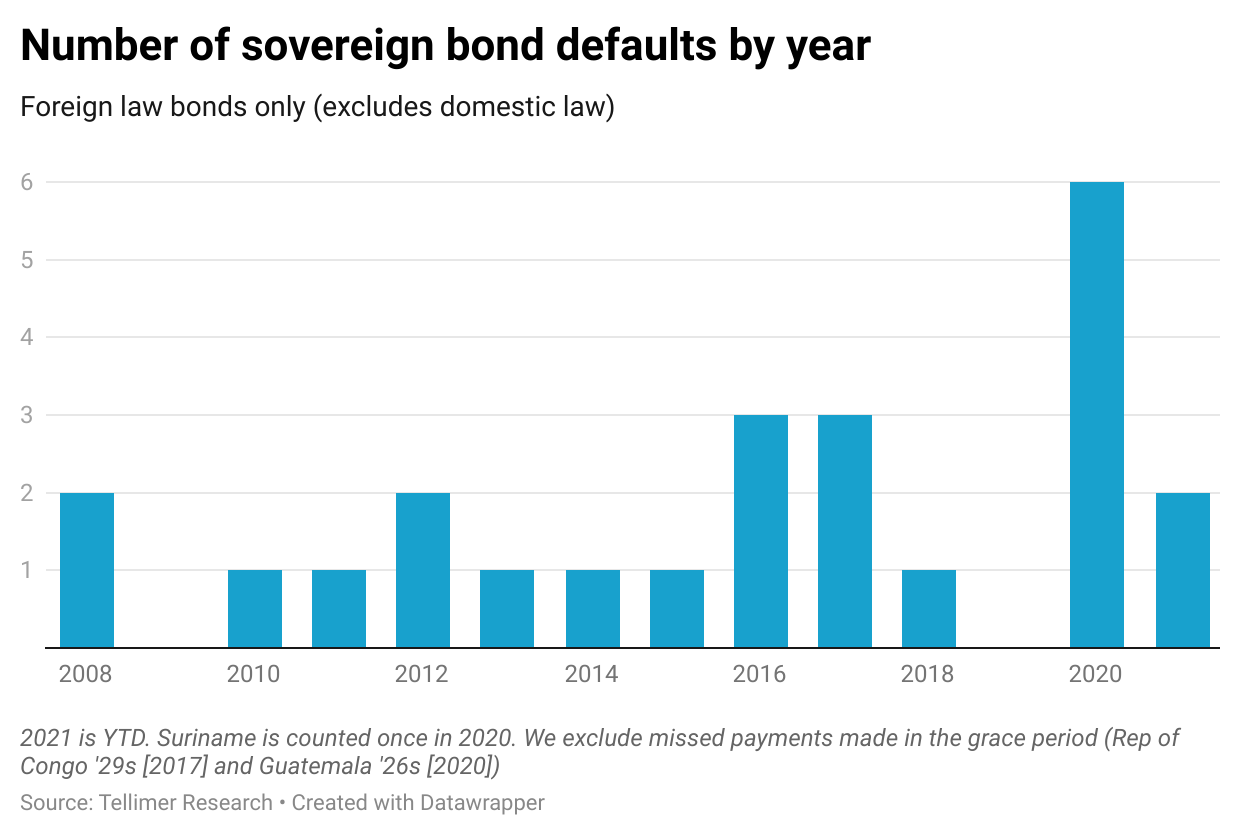 However, there is still a possibility that there will be a third default, after Ethiopia announced at the end of January its intention to restructure under the G20's Common Framework, a debt restructuring initiative for eligible low-income countries. A restructuring of the country’s bilateral debt may extend to the country’s sole eurobond, under the principle of comparability of treatment, although the government has said it wants to exclude the bond, which after all is only 4% of the debt, and it even paid the last coupon on 30 June. But whether omitting it will wash with the official sector (which is still smarting over the lack of private sector participation in DSSI) remains to be seen. Recent statements have however been somewhat ambiguous.

And this excludes Chad, which, although it is also seeking a Common Framework restructuring, does not have any eurobonds, which is our focus here. Chad does however have other commercial debt (oil trader loans) which will be subject to PSI as part of its Common Framework treatment.

So where will the next sovereign default come from? We highlight four approaches to judging who might be most at risk of default.

As investor attention focused on who would be next, Cameroon and Mozambique fell under the spotlight, given their macro vulnerabilities, although both countries sought to dispel such fears. Cameroon even issued a bond at the end of June, its first issue in six years. Laos has also been a concern, following repeated failed attempts to refinance its bond maturity on 30 June, although the bond was eventually repaid. Meanwhile, tourist-dependent Maldives issued a new bond in March alongside a tender offer for its existing 2022s. 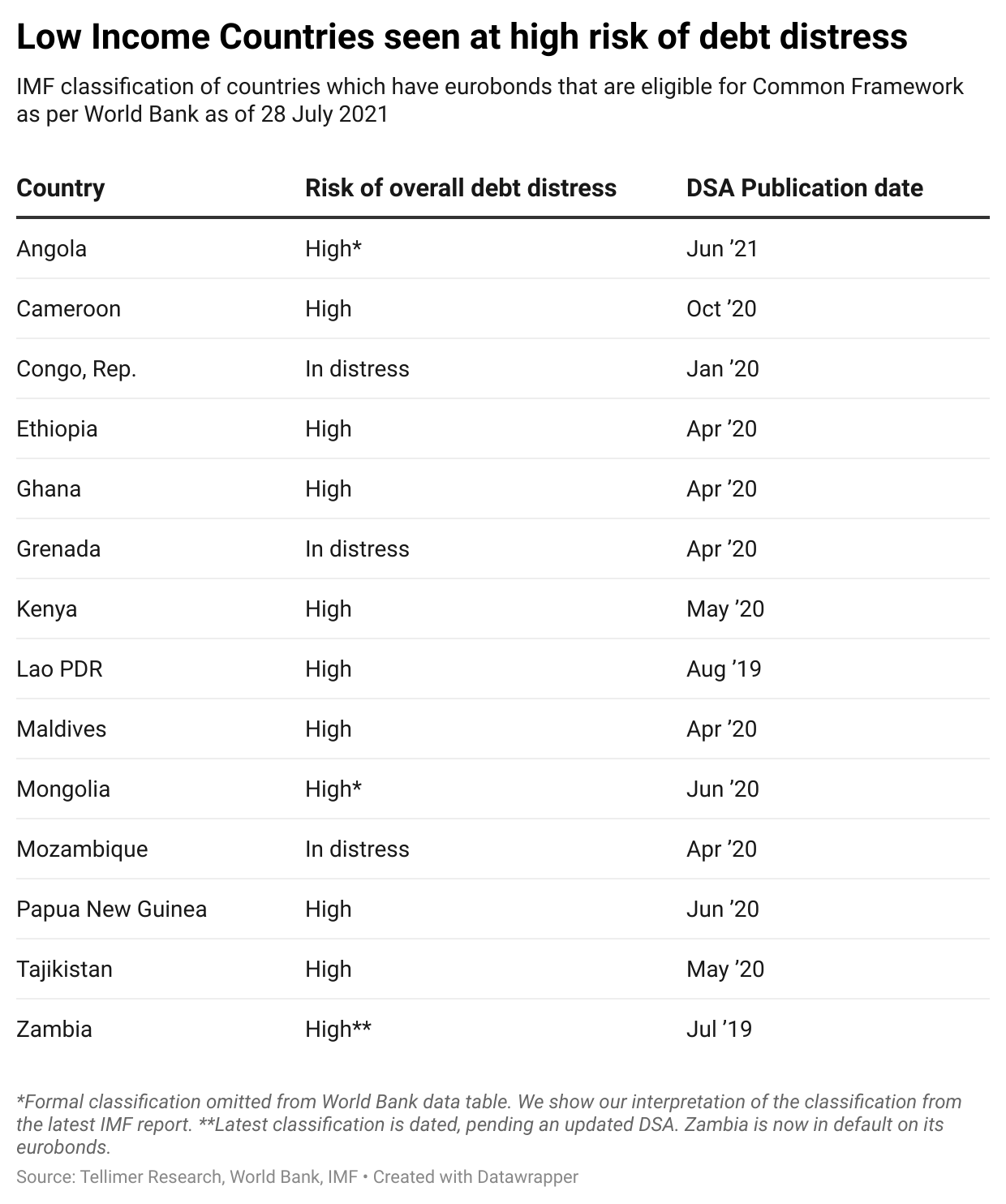 Hence, perhaps a bigger risk therefore comes not from LICs that might be tempted to follow Ethiopia's lead in pursuing a Common Framework treatment, but from countries that are outside its scope (eg such as Sri Lanka). Indeed, of the six sovereign defaulters last year, only one (Zambia) is a low-income country.

2. CCC ratings or below

One way to look at who might be next to default is to look at sovereign ratings. Those with already low sovereign ratings (defined here as rated CCC or below) have a higher probability of default. For example, the implied probability of defaulting in one year for a country rated in the C-CCC category is 26.5% according to Fitch (other agencies will have their own default probabilities).

We identify 13 countries with ratings in the CCC-rating bucket or below, across the three main agencies, and excluding those already in default (five countries are in default: Belize, Lebanon, Suriname, Venezuela, and Zambia).

Of these, there are five countries that all three agencies agree on as the most likely to default – Angola, Argentina, Mozambique, Republic of Congo and Sri Lanka, or four if we exclude Argentina as it is hard to see it defaulting on its restructured bonds in the near-term given its favourable debt service profile in the front years. 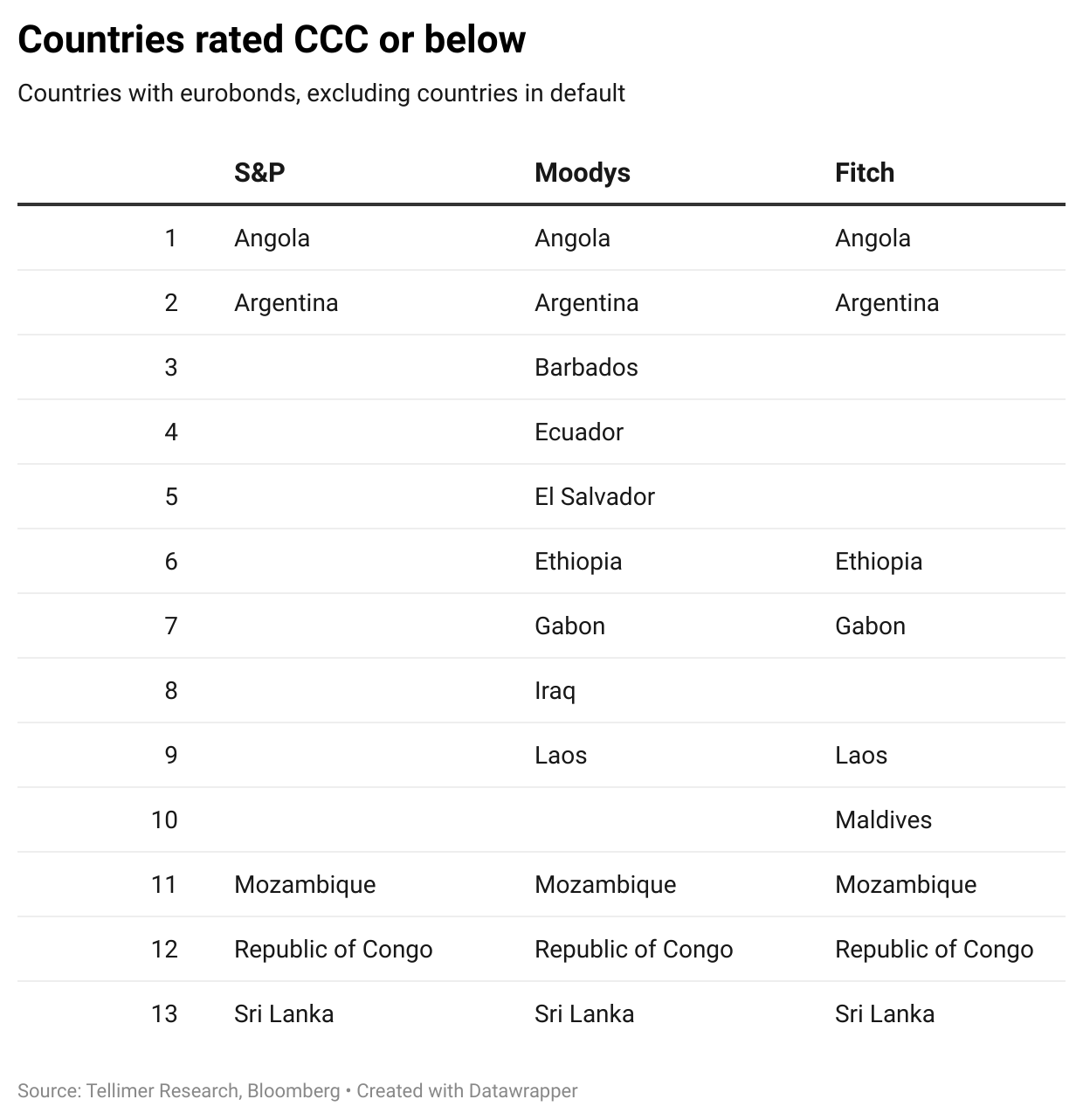 We identify eight countries with foreign bonds yielding 10% or more, excluding those in default. Of these, four only have one bond, while four have a curve, although with most bonds (if not all) over 10%.

One country that has been seen for some time now as potentially the next to default is Sri Lanka, with bonds priced in the 60s. Sri Lanka has been able to muddle through during the pandemic by securing various swap lines, and the government recently paid its US$1bn eurobond on 27 July out of reserves. But questions will still persist beyond that if it doesn’t seek an IMF programme (which the government has continued to express resistance to). 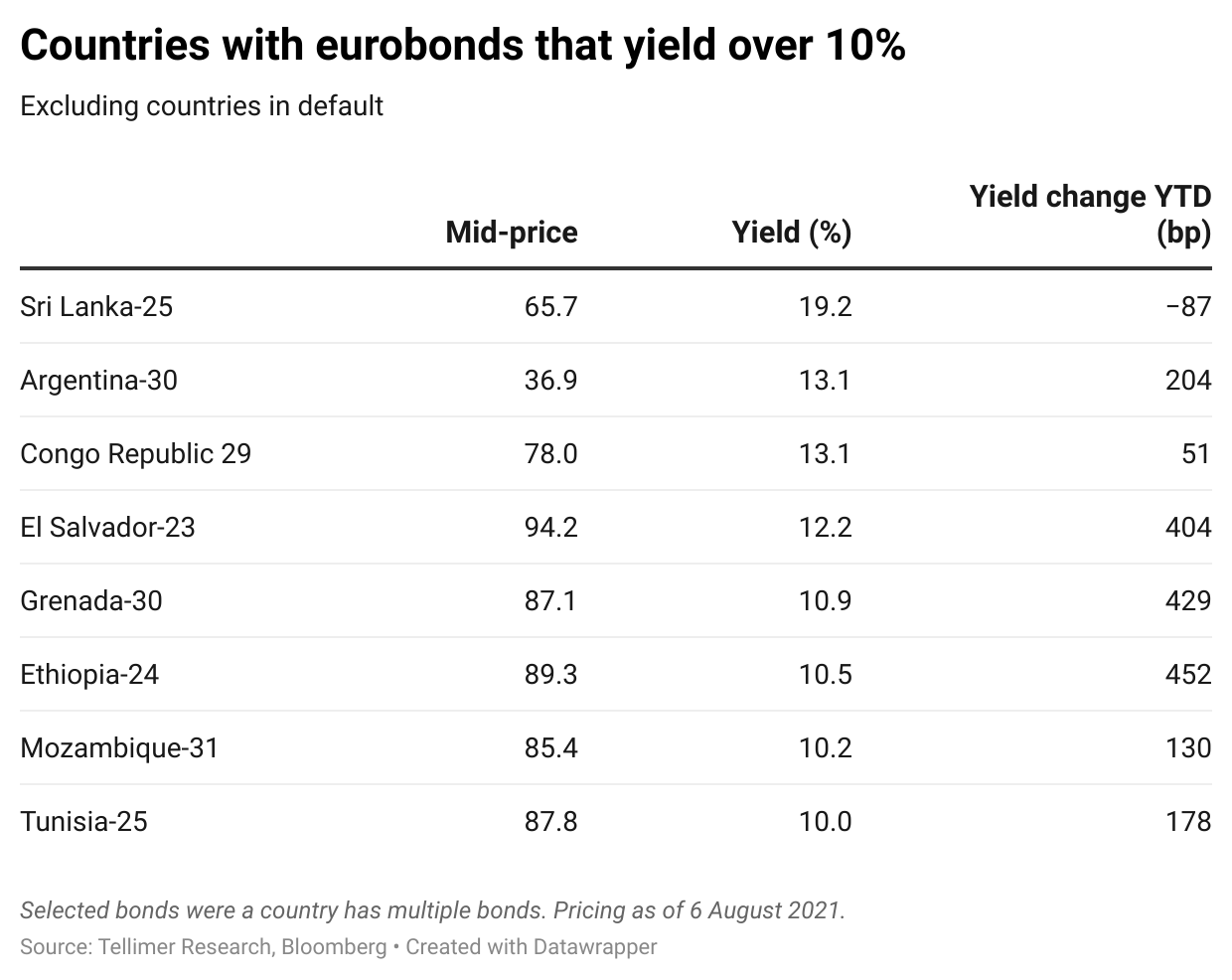 But while some of the constituents of this list will be familiar (and almost ever-present), Tunisia and El Salvador are newcomers. Each is grappling with country-specific factors, and have seen their yields rise precipitously throughout this year.

In Tunisia, bonds have sold off due to a deteriorating economic outlook, a spiralling health crisis, and delays in securing the sought-after IMF programme amid rising political tensions and social unrest. The reform outlook was dimmed even further by President Saïed’s decision to fire PM Mechichi, which the ruling Ennahdha party has called a “coup”, and will make it more difficult to implement the required reforms to secure an IMF programme. In turn, this will weigh on other sources of external financing and make it difficult to meet Tunisia’s large fiscal and external funding needs.

In El Salvador, bonds have weakened since May, after the IMF programme was put in doubt following the President’s removal of top judges and the attorney general by Congress. The country’s subsequent adoption of Bitcoin as legal tender has added further uncertainty to the status of IMF programme talks, with the run of bad news culminating in Moody’s downgrade to Caa1 at the end of July. 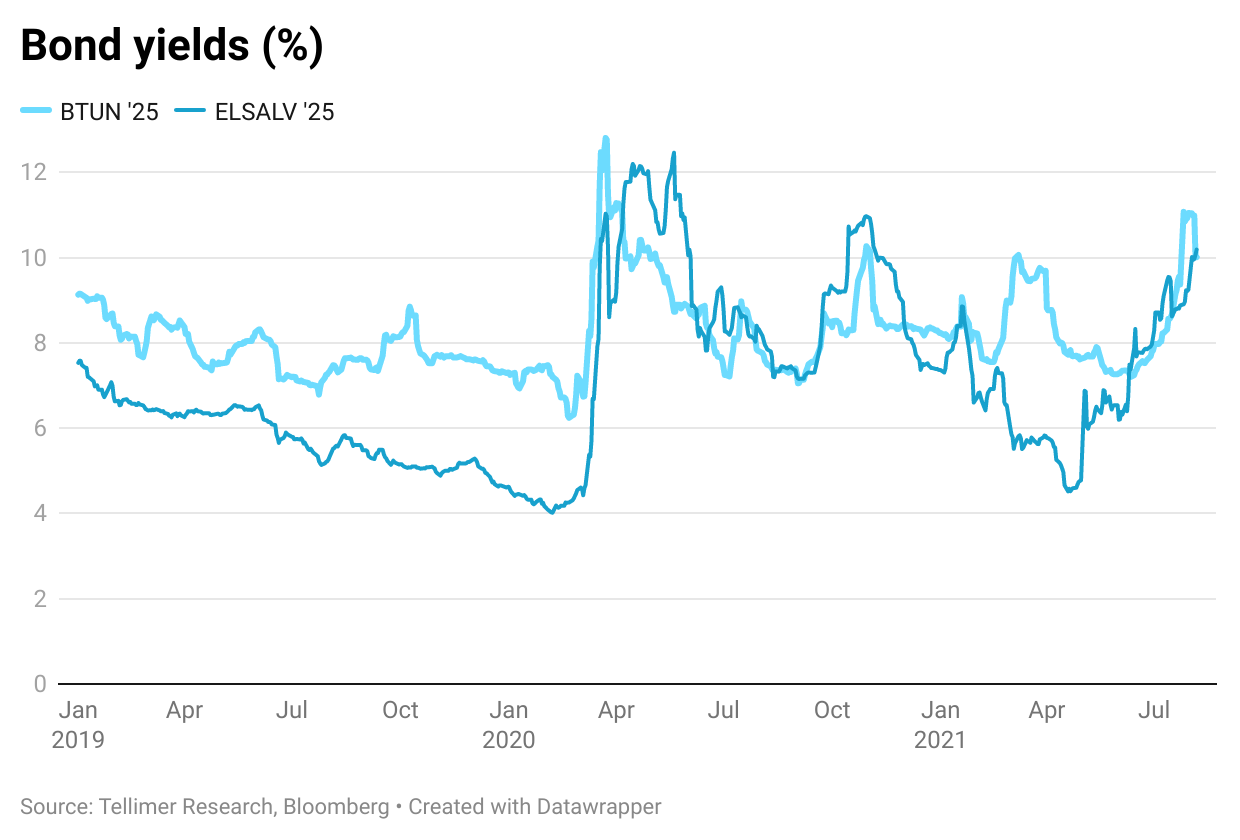 If we combine the two signals (CCC rating and yields over 10%), markets and ratings agencies seem to agree that Argentina, Mozambique, Republic of Congo and Sri Lanka are at the highest risk of default. Again, we might want to discount Argentina from this list.

Meanwhile, our own debt vulnerability scorecard flags Sri Lanka, Jamaica, Tunisia, Ghana, Mongolia, El Salvador, Kenya, Pakistan, Colombia, and Costa Rica as the most vulnerable countries. Together with the above signals, this confirms the concern over El Salvador, Tunisia, and Sri Lanka.