Recent H1 20 results from Bank Audi, BLOM Bank and Byblos Bank shed light on an economy that is imploding before our eyes. Politicians’ inability to form a consensus has meant previously-granted aid packages remain locked away, and is hampering current discussions with the IMF. In the meantime, the currency has collapsed, while controls on deposit withdrawals have stymied commercial activity. 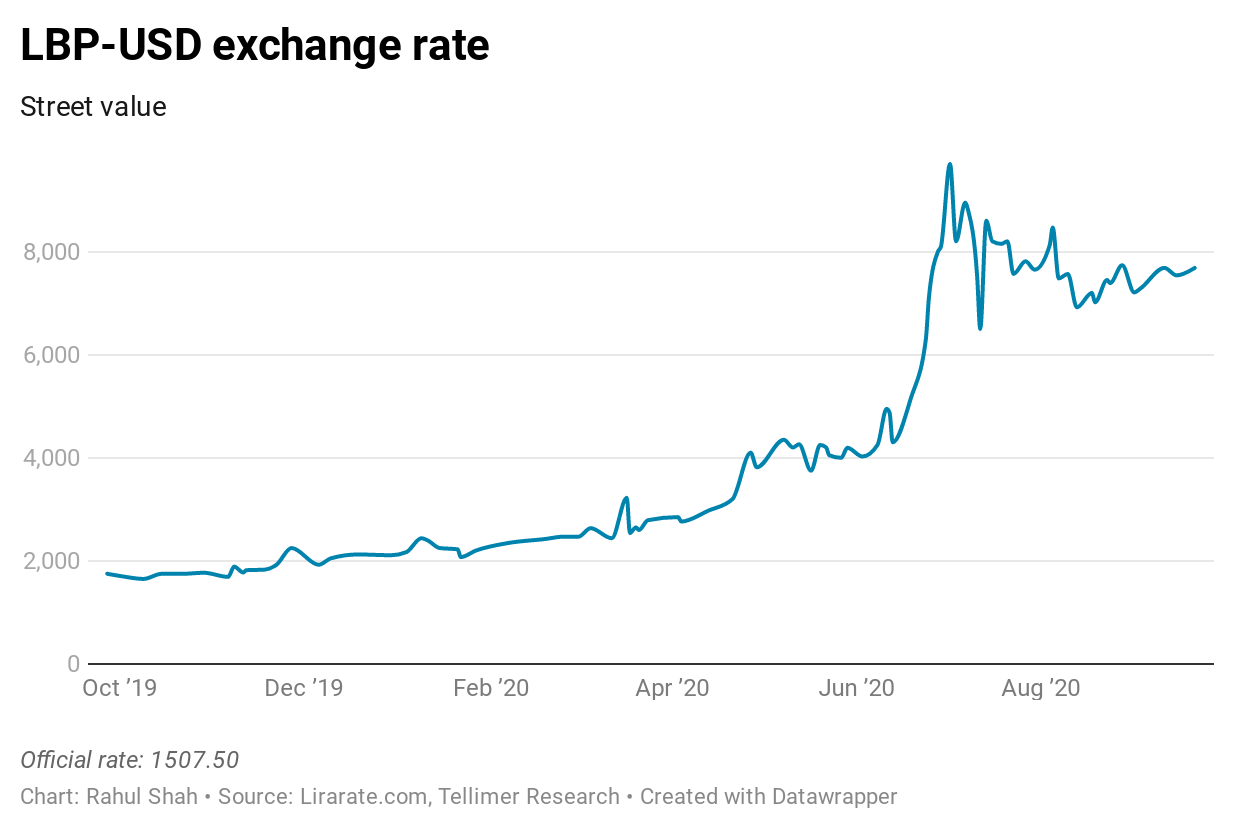 Aggregate lending for the top three Lebanese banks has shrunk 20% ytd, and 31% yoy. The sharpest decline was recorded at Byblos. Understandably, given the uncertain outlook, banks are looking to safeguard capital rather than extend fresh loans. This conservative positioning seems appropriate when we consider recent datapoints: real GDP fell 7% in 2019 and is likely to decline by 12% this year; Beirut 5-star hotel occupancy levels averaged 3% in Q2 20; new car sales fell over 90% yoy in August; passenger traffic at Beirut airport fell 98% yoy in June. 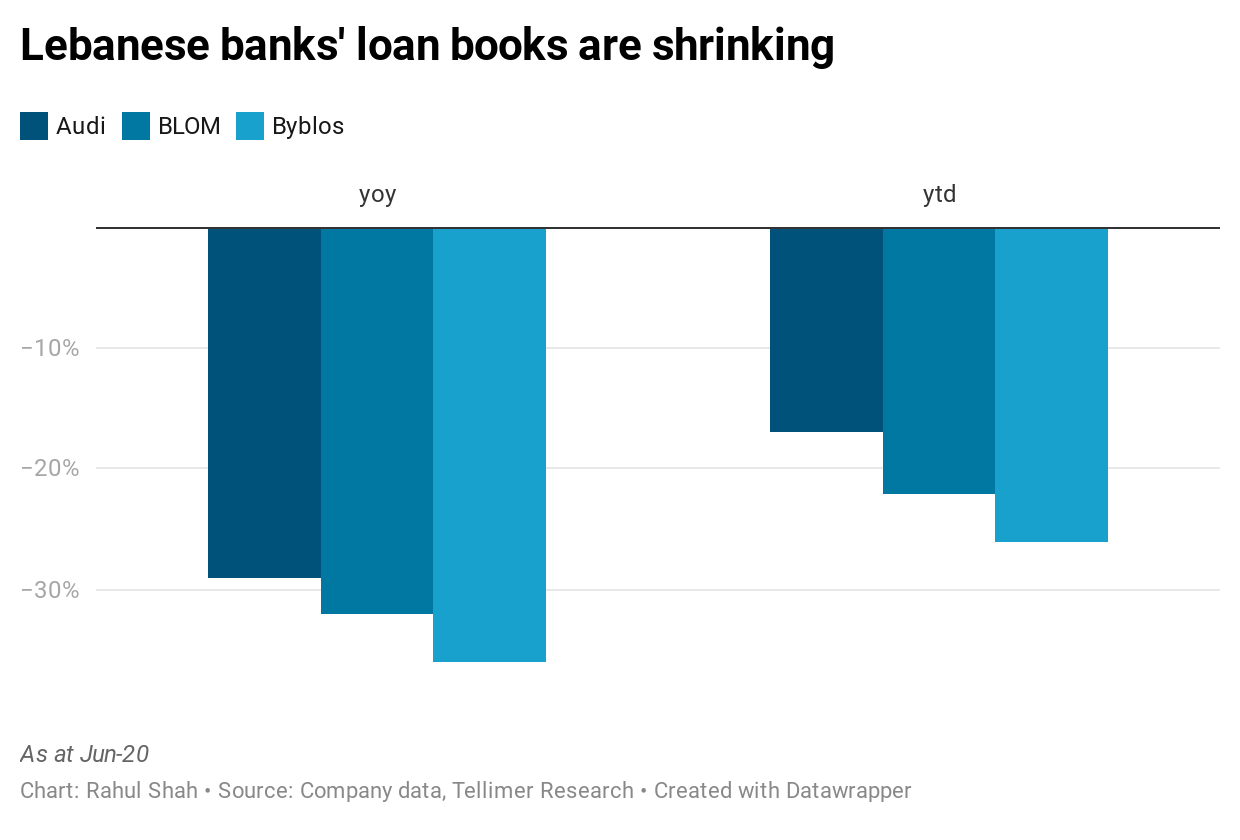 The chronic nature of Lebanon’s problems is illustrated by the observation that, even after suspending payments on its eurobonds in March 2020, in H1 20 the government must still borrow one out of every three dollars it spends. The slowing economy is hitting government revenues; VAT income fell 50% in H1 20, for example. Meanwhile, during the same period, around one-quarter of public spending related to debt servicing, while three-quarters of the remainder was directed towards compensation (salaries/pensions), leaving a rather limited allocation to public services.

Profits, too, have evaporated

Unsurprisingly, given the challenging environment, banks recorded minimal profit in H1 20. Given likely heavy ongoing provisioning needs, the profitability outlook for the sector is poor, in our view. 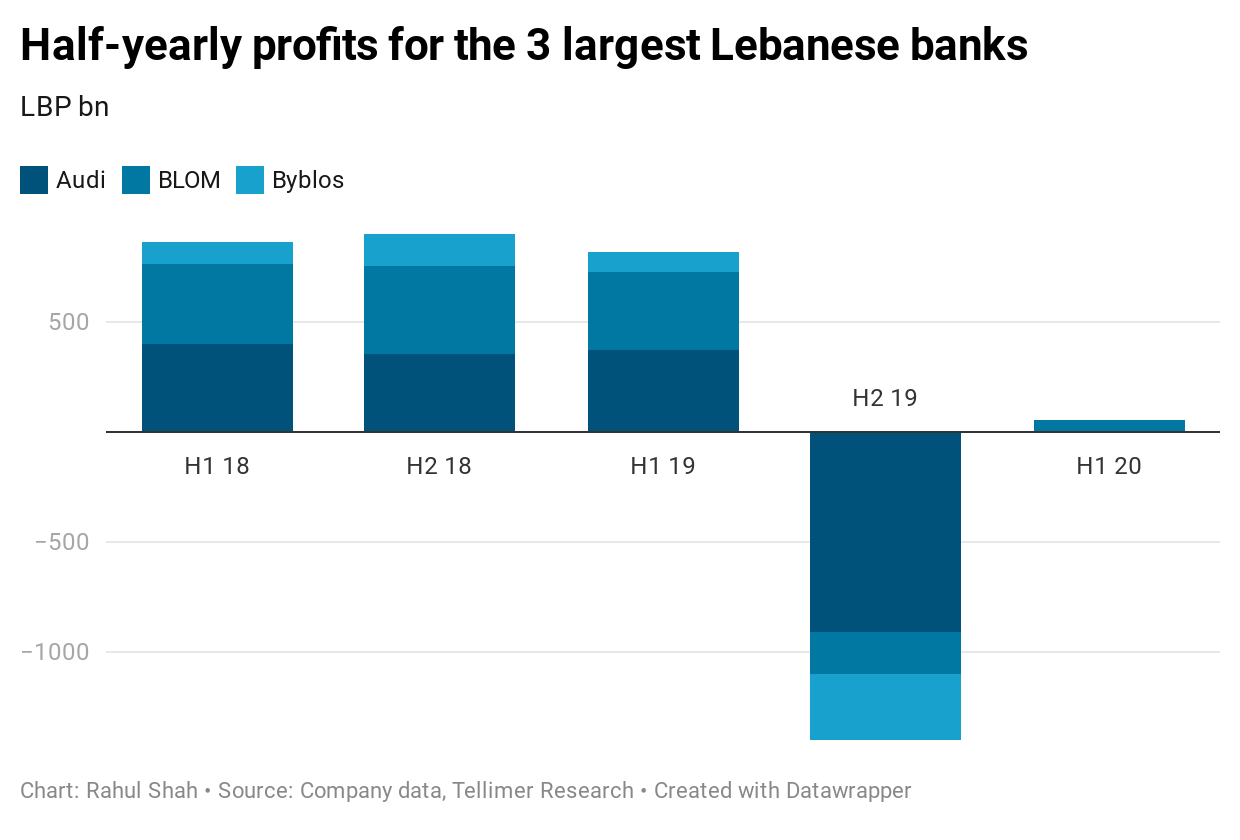 Bank Audi has estimated that, in the absence of the impact of the financial crisis in Lebanon, group profits would have amounted to LBP360bn in H1 20, equivalent to 1.3% annualised ROA and 16.2% ROE. Three-quarters of the impact of the crisis was felt in terms of higher credit costs, with the remainder affecting investment income. The bank actually reported zero net profit in H1 20.

Valuations are depressed for good reason

The valuations of Audi, BLOM and Byblos range from 0.1-0.2x book value. However, we believe that, if the true value of assets were recorded in the accounts, these banks’ capital ratios would fall well below regulatory minima. A rigorous mark-to-market exercise followed by bank recapitalisation and sector restructuring, is likely to be a key pillar of any credible economic reform package.