Ahead of the parliamentary election this coming Sunday (15 May), outgoing Deputy Prime Minister Saade Chami and Finance Minister Youssef El-Khalil gave a presentation to creditors on Wednesday (full presentation here), the first such presentation since March 2020.

The presentation is a welcome first step towards more transparent engagement with creditors, and provides an update of the macroeconomic framework underlying its IMF-backed reform and restructuring programme (which is still awaiting Executive Board approval, after a staff-level agreement was reached in April – the government hopes to obtain approval by the end of the year). 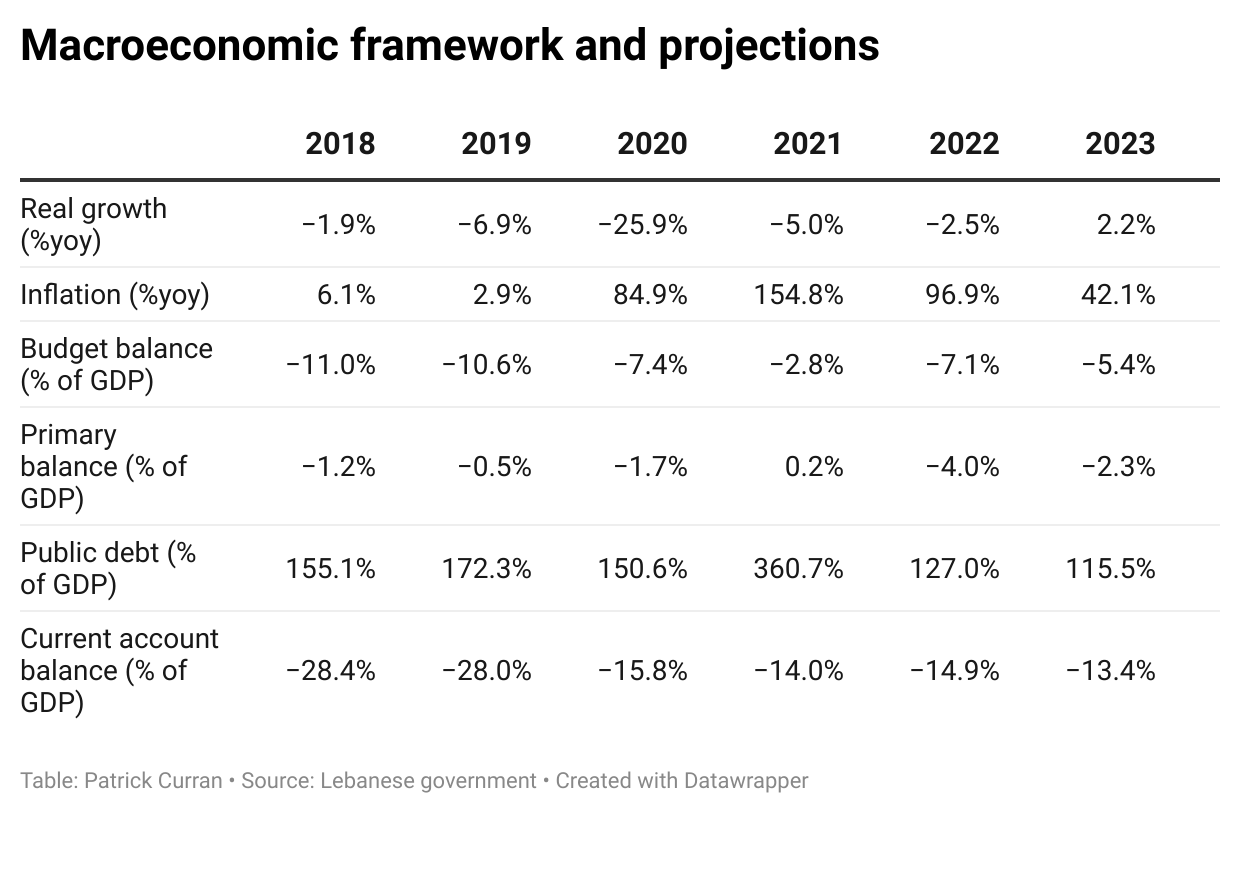 In nominal terms, the debt stock is comprised of cUS$37bn of eurobonds (which includes cUS$9bn of interest arrears) plus US$2bn of bilateral and multilateral external debt and US$62bn of domestic debt at the official exchange rate of 1,507.5 (or US$5bn at a rate of 20,000/US$). 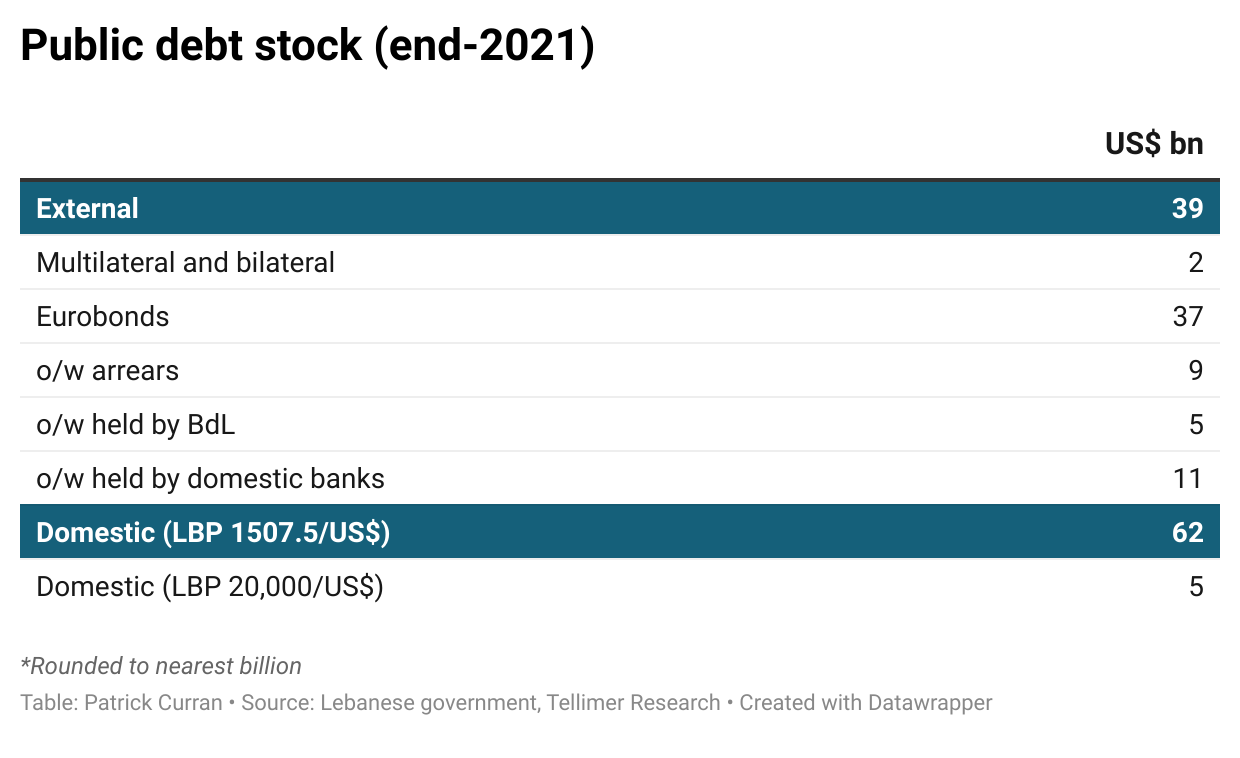 Chami said that only the eurobonds stock would be included in the restructuring, with bilateral and multilateral external debt to be left untouched and domestic debt already receiving a c95% haircut from the currency devaluation. This is a change from the restructuring plans outlined in 2020, which pencilled in a 40% haircut for domestic debt and a 75% haircut for external debt, but seems appropriate based on the currency movements in the 2+ years since (the 2020 reform programme was based on an exchange rate of 3,500/US$).

The starting point for the restructuring is now much worse, with both programmes hoping to bring debt below 100% of GDP over the medium term, but from a starting point of 175% of GDP in the 2020 programme versus 360% today. That said, using the government’s nominal GDP estimates, we project that it would require a 57% nominal haircut to reach the government’s debt target in 2022 based on an exchange rate of 20,000/US$, 70% based on the current parallel rate of 27,000/US$ and 77% based on an exchange rate of 34,000/US$. 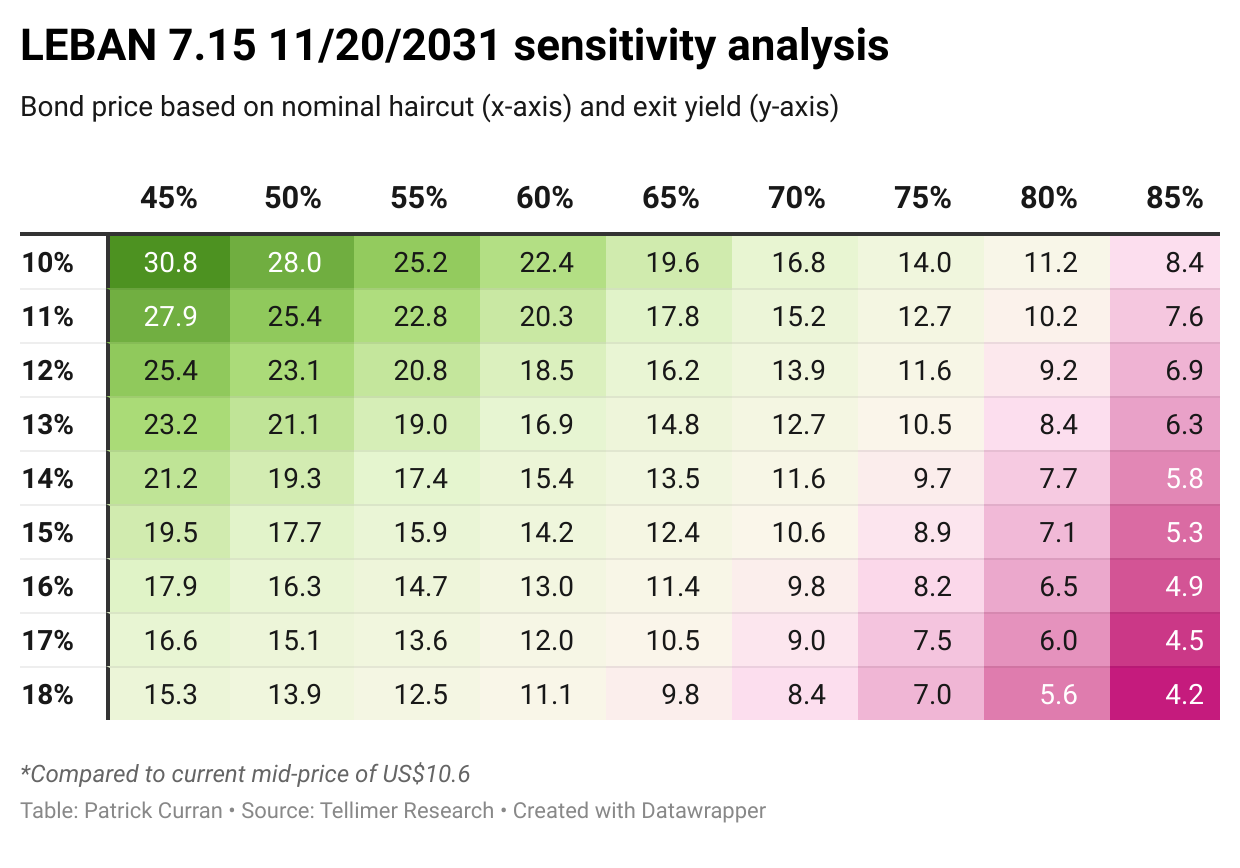 The presentation also estimates US$72bn of “financial sector losses” that will need to be borne by the banking sector (US$9bn) and BdL (US$63bn), which is only a slight change from the US$69bn estimate from 2020. That said, this number is a top-down estimate and is not set in stone. It will need to be refined in a bottom-up, bank-by-bank accounting exercise, which will help determine which banks will survive and which will need to be wound down or consolidated into stronger banks. The government hopes to protect all depositors with accounts <US$100,000, but this too is a moving target.

Although the presentation is a welcome step towards increased transparency, it also reveals just how much still needs to be done to secure an IMF programme. It outlines nine prior actions, of which just three of been submitted to parliament. None of them has been approved by the outgoing parliament, meaning they must all be approved by the new government, when it is in place. This will be followed by a new bondholder identification exercise and exchange of information on the DSA with creditors, which will ultimately lead to Board approval of a four-year, US$3bn IMF programme. 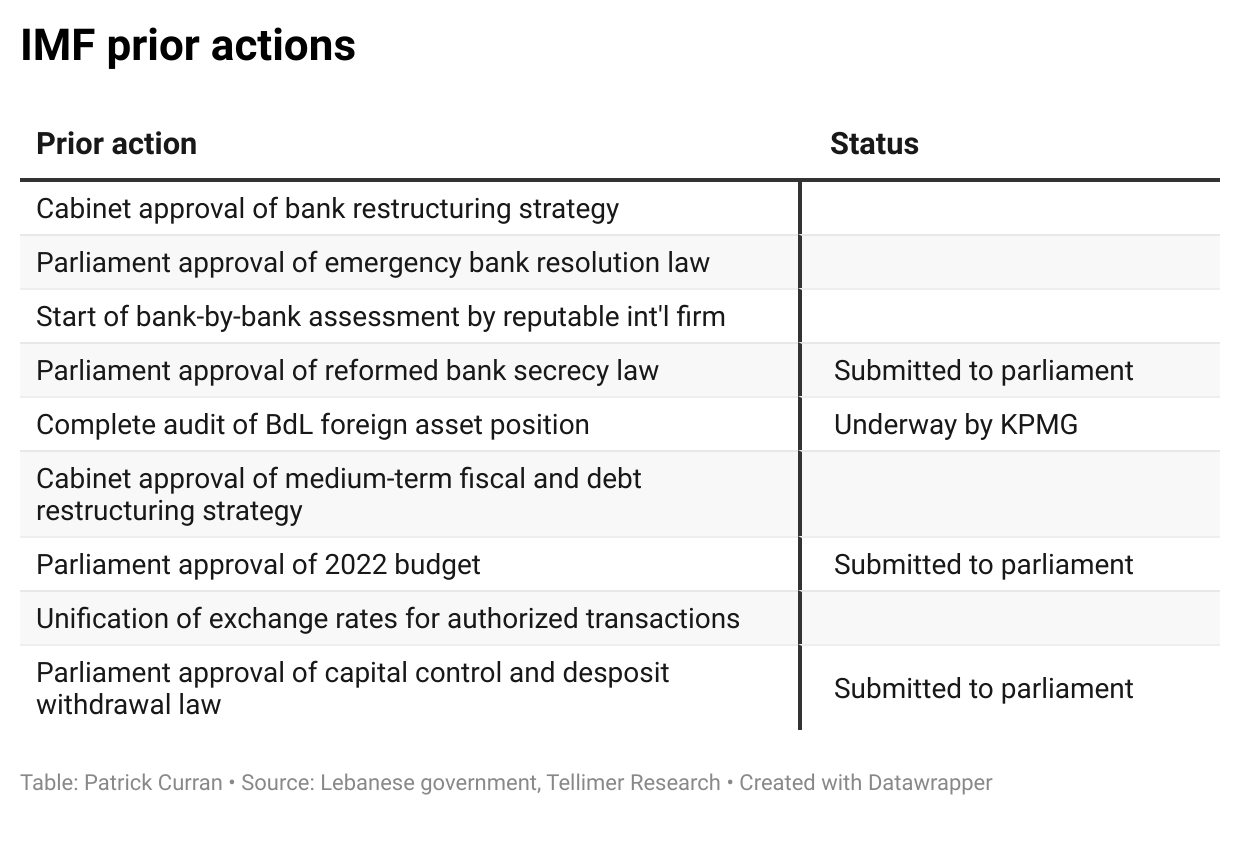 That said, a caretaker government will not able to make the decisions and implement the policies needed to engage with creditors and obtain Board approval. As such, it is essential that a government is quickly formed after this weekend’s elections, which is by no means a foregone conclusion and could be subject to major delays. And even if the government is quickly formed, the banking association (ABL) remains opposed to the banking sector restructuring plan as currently proposed, which could cause delays to the finalisation of the IMF programme. Lastly, even once the programme is finalised, the government estimates that at least US$8bn-10bn of additional external funding will be needed to fund the programme, so restoring the confidence of donors and creditors is necessary for the restructuring to be successful.

Against this backdrop, the importance of this weekend’s parliamentary election is clear. The timely establishment of a government that is willing and able to implement the necessary reforms to secure an IMF programme and set the stage for good-faith negotiations with creditors is essential, but the political instability of recent years (with four Prime Ministers since former Prime Minister Saad Hariri's resignation in October 2019 and a 13-month gap before the formation of the current government) shows this is far from certain.  The uncertainty is exacerbated by the decision of both Hariri and current Prime Minister Najib Mikati not to run in the elections, leaving a power vacuum in the Sunni political community that is meant to fill 27 parliamentary seats and the seat of prime minister per Lebanon's confessional political system.

With much uncertainty about the path forward and ultimate shape of the restructuring, despite the added clarity from this week’s creditor presentation, we retain our Hold recommendation on Lebanese eurobonds at US$10.6 (69% YTM) on a mid-basis for the LEBAN 7.15 11/20/2031s at cob on 12 May on Bloomberg. 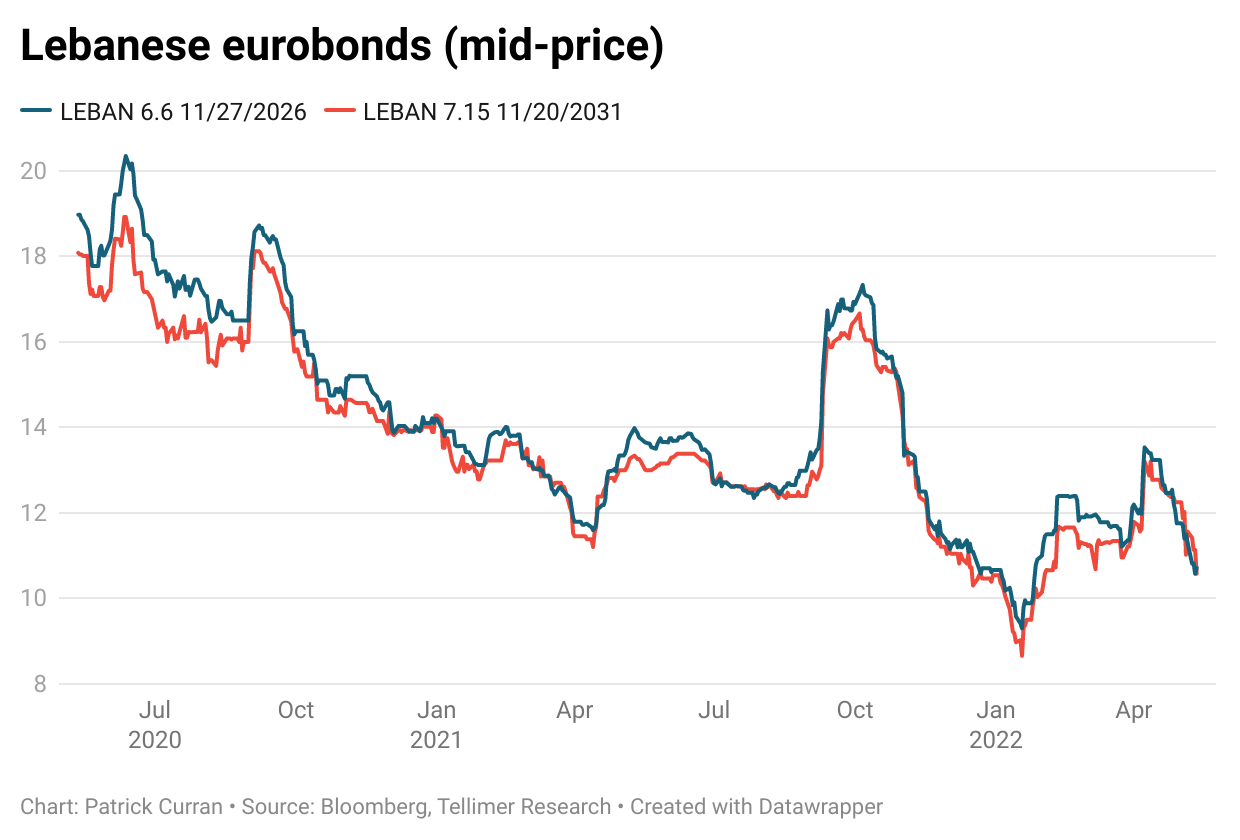