Lebanon webinar notes: no end in sight for hyperinflation and currency crisis

On 15 September we hosted a webinar with Professor Steve H. Hanke, Professor of Applied Economics at The Johns Hopkins University (see here for full bio). Professor Hanke is recognized globally as an expert on currency reform and hyperinflation, and we summarise his views on Lebanon’s ongoing crisis here. We would like to thank Prof. Hanke for his time and contributions to this note.

Lebanon is currently experiencing hyperinflation, the first episode ever recorded in the Middle East and only the 62nd globally (see here for Prof. Hanke’s Troubled Currencies Project website).

While inflation was officially 112.3%yoy in July, Professor Hanke’s real time data puts it at 365%yoy as of 15 September. At the same time, the LBP has deteriorated to c7,800/US$ on the parallel market. 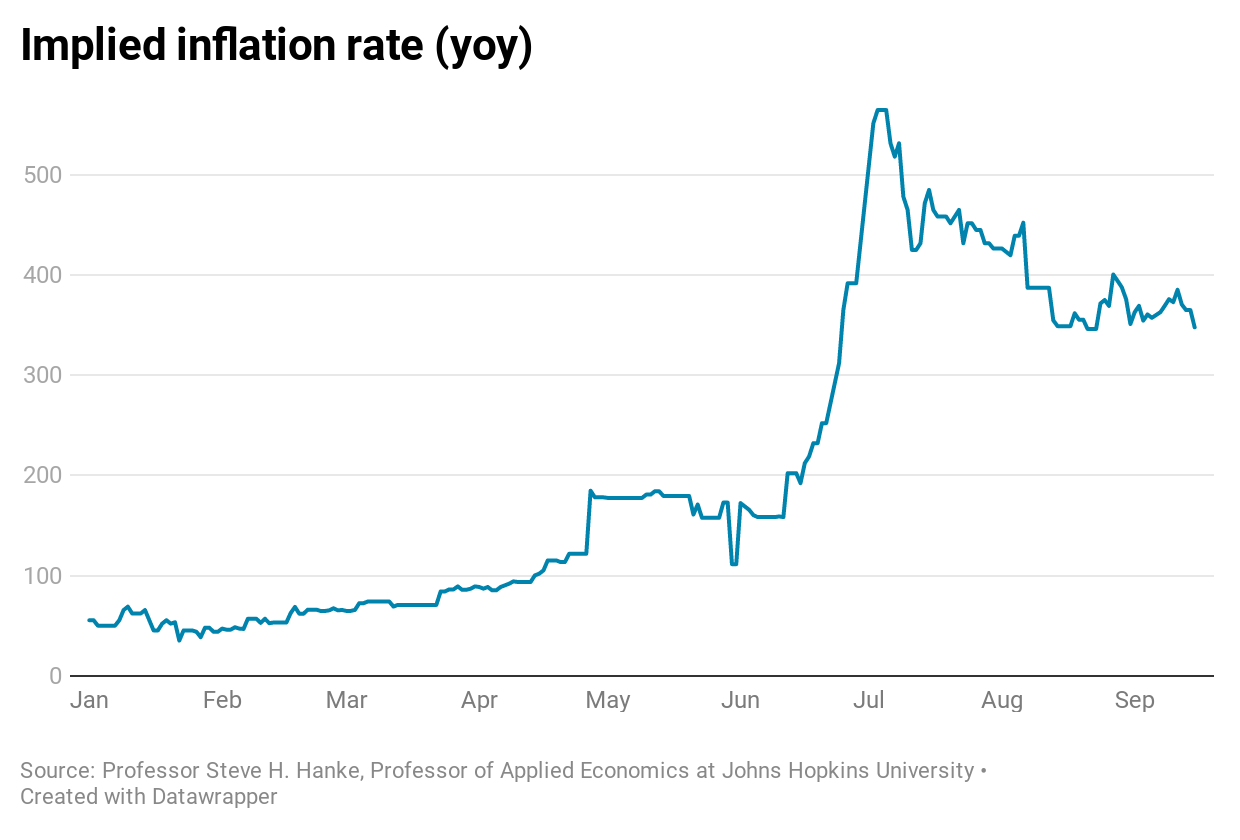 While the Lebanese government and IMF have laid out detailed reform programs, they will not succeed unless Lebanon first restores sanity in the FX market and puts a lid on hyperinflation. The only way to do this is by establishing a currency board or dollarizing the economy.

Once a currency board has been established, government will have the credibility it needs to undertake other reforms such as electricity sector restructuring and recapitalization of the banking sector. It is essential that reforms are properly sequenced.

While the IMF is recommending a devaluation followed by a managed float, there is not a single case among the 62 recorded episodes of hyperinflation where this has worked. Conversely, none of the over 70 currency boards (here) that have been established since the mid-19th century have ever collapsed.

1990s Argentina is often cited as an example of a failed currency board, but this is a misconception. Argentina did not have a currency board. It had a convertibility system in which active, discretionary monetary policy was engaged in.

Bulgaria is a notable success story, with inflation falling sharply from a peak of 242% per month in February 1997. After a currency board was installed in July 1997, inflation collapsed. And, by the end of 1998, the annual inflation rate was only 1% per year.

If a currency board was properly implemented in Lebanon, capital inflows would immediately occur as foreign investors and the Lebanese diaspora enter to take advantage of higher local rates, creating a rare, risk-free arbitrage opportunity for investors.

Currency boards also have the advantage of introducing a hard budget constraint, putting Lebanon’s politicians in a monetary straitjacket. Unable to finance the deficit by printing money, spending would quickly contract to only what can be financed by domestic revenue and borrowing.

This is exactly what has happened in Bulgaria, where budgets have been balanced on average since the currency board was established and debt consequentially remains below 20% of GDP, amongst the lowest in Europe.

However, a currency board or dollarization does not guarantee fiscal discipline, as evidenced by Ecuador’s recent default after years of borrowing externally to flout the fiscal constraint. To guarantee a hard budget constraint, the currency board should be coupled with new constitutional rules that require a supermajority vote for new taxes or increased debt. These two rules would force spending discipline.

Other currencies like the EUR could also be used to dollarize or establish a currency board, especially given Lebanon’s historic ties to France. However, the US$ is the clear hard currency of choice of people on the street in Lebanon, so the new currency regime should be based on the US$.

Looking beyond Lebanon, Zimbabwe is experiencing a similar crisis, and the only way to put an end to spiralling inflation (inflation is 548% yoy according to Prof. Hanke’s measurement) is to re-dollarize the economy.

Turkey is a less severe example, but Prof. Hanke anticipates we will see a continued depreciation of the Turkish lira to at least 8 TRY to the US$. 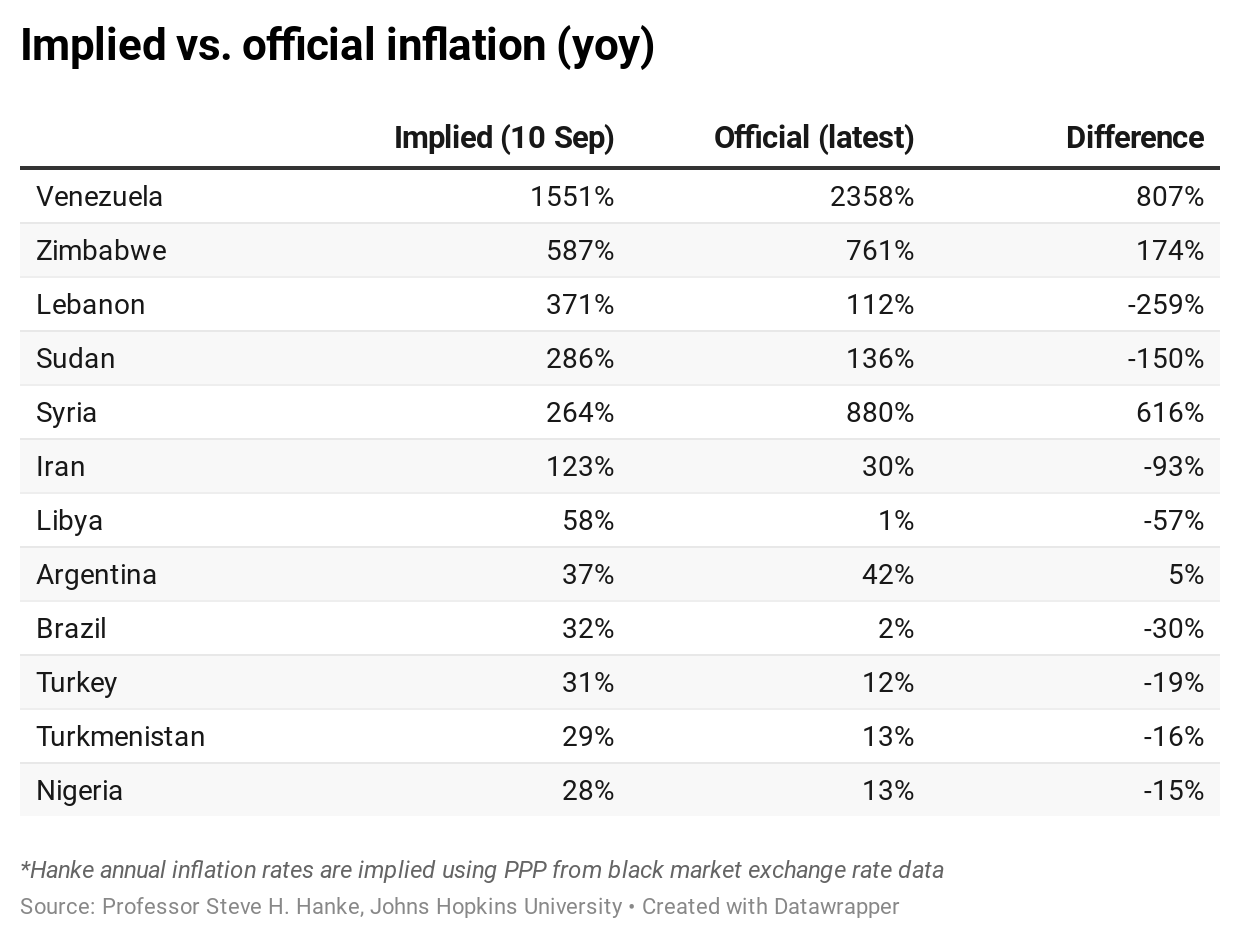 Conversely, Professor Hanke is more relaxed about currency pegs in the Gulf despite low oil prices, as reserves remain high enough for now to support the pegs.

Overall, while the reforms discussed in Lebanon correctly diagnose many of the issues they are doomed to fail unless hyperinflation can be tamed first. The IMF’s plan to float the currency will not be sufficient, and sanity can only return in the context of a currency peg or dollarization.

Unfortunately, that does not seem to be on the table at this stage. Investors should use their negotiating power to argue more forcefully for a currency board or dollarization as a prior action before debt restructuring and other reforms are undertaken. This will increase the likelihood that Lebanon’s restructuring program will be successful and sustainable.