Lebanon: Staff-level IMF agreement is a huge (but first) step

Following a mission from 28 March to 7 April, the IMF announced yesterday that it had reached a staff-level agreement with the Lebanese authorities on a 46-month, US$3bn programme (slightly smaller than the US$4bn funding package generally mentioned, but with the potential to unlock over US$10bn of other funding). This follows a statement by Deputy PM Chami last week that Lebanon hopes to secure an agreement ahead of parliamentary elections on 15 May, to which we had expressed serious doubts.

However, we had also pointed out that a staff-level agreement could allow the IMF to pragmatically agree to a programme before elections while making approval contingent on the completion of prior actions. And indeed, that is the approach that they seem to have taken, with the agreement still subject to Executive Board approval "after the timely implementation of all prior actions and confirmation of international partners' financial support." The list of prior actions is extensive, including:

As such, we still believe that it is extremely unlikely that Board approval will be granted before elections. Further, political uncertainty could make it difficult to implement the needed reforms post-election as well, potentially causing delays and serving as an obstacle to final Board approval. That said, the staff-level agreement is a major positive step, and sets the stage for the new government, whatever its composition and whenever it emerges, to hit the ground running after the 15 May election.

It will also set the stage for more constructive talks with external creditors, with the IMF highlighting the need to complement the programme with "the restructuring of external public debt that will result in sufficient creditor participation to restore debt sustainability and close financing gaps." Nearly 2.5yrs after Lebanon’s economic crisis began in earnest, this is a welcome bit of positive news and the first major step towards solving one of the worst crises in recorded economic history, per the World Bank.

Bonds have responded positively, with the LEBAN 7.15 11/20/2031s rising by 0.8pts (6.6%) to US$12.4 yesterday, a 5-month high. While we still think that Lebanese eurobonds are trading near the lower end of recovery value, we also still caution against excessive optimism, as the staff-level agreement is the first step (albeit a major one) towards solving Lebanon's economic crisis.

It is now in the authorities' hands to implement the long list of prior actions, including the politically contentious banking sector restructuring, against the background of looming elections and huge political uncertainty. As such, we retain our Hold recommendation on Lebanese eurobonds at US$12.4 (57.7% YTM) on a mid-basis as of cob on 7 April on Bloomberg. 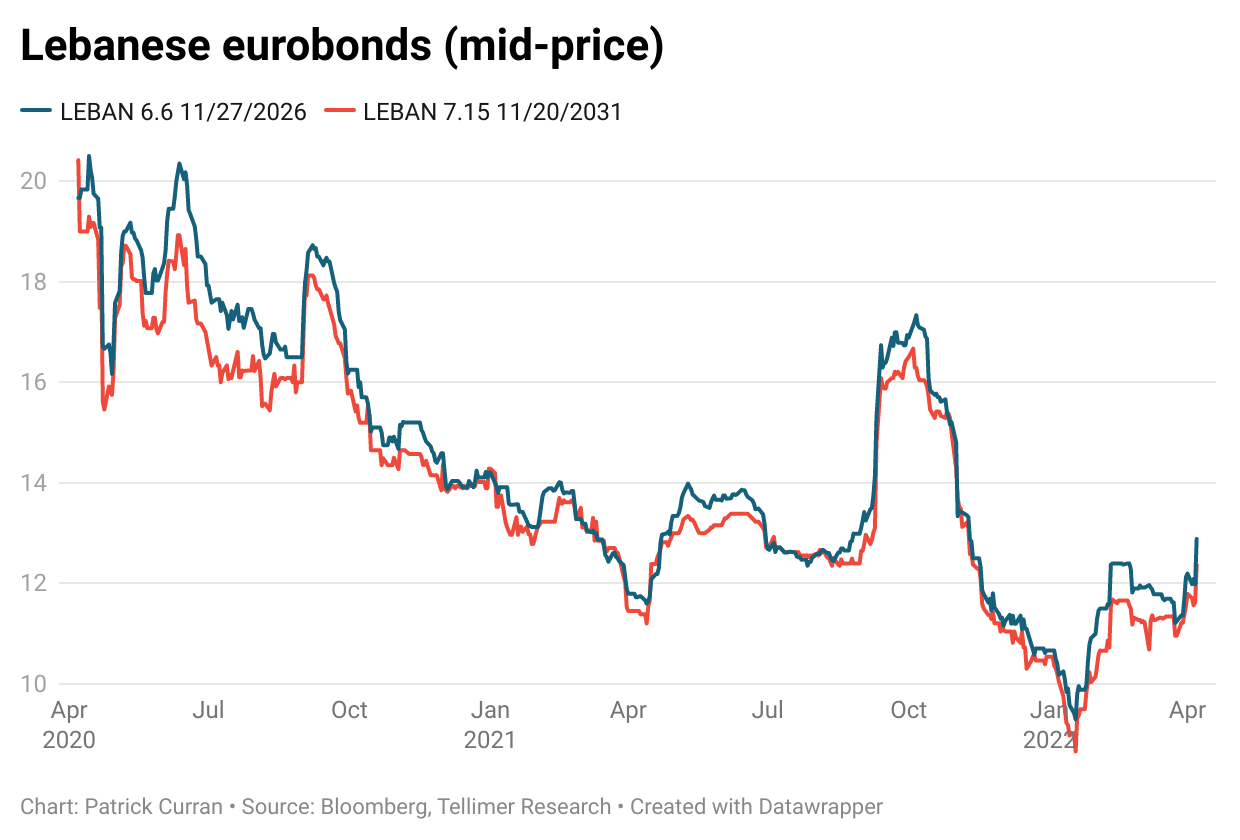