Ahead of the crucial 9 March bond maturity, we consider some policy options for the authorities, what the debt stock and its composition might mean for restructuring options, undertake a DSA exercise to assess what size treatment may be needed, and look at other restructuring considerations. We conclude with a recovery analysis and investment recommendations.

We think policy options include (1) status quo – pay 9 March maturity and muddle through, but this doesn’t look viable; (2) a homegrown adjustment plan – pay 9 March maturity but use the time to come up with a credible and coherent economic adjustment plan, one which does not include debt restructuring; this may not be viable either; (3) adjustment plan plus domestic debt exchange; (4) comprehensive restructuring including domestic debt and foreign bonds within an IMF programme. Given the IMF’s view that Lebanon’s debt is unsustainable, we think the Fund could only approve a programme under its new lending framework if there is a debt restructuring (PSI), although how much they would seek is unclear. 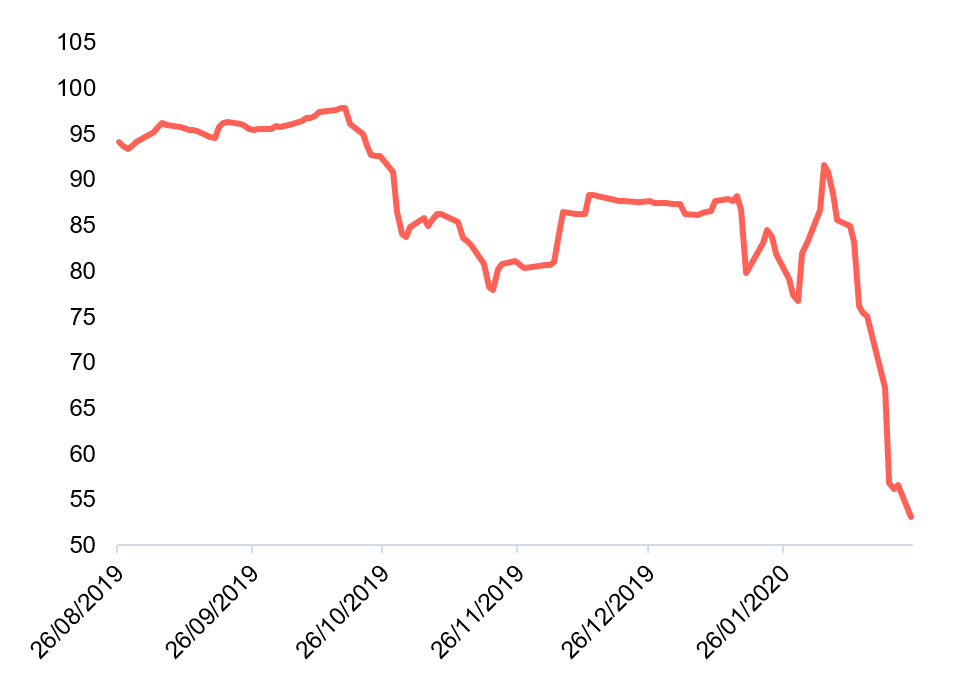 Lebanon’s gross public debt is high, at 158% of GDP in 2019, and unsustainable. That is, Lebanon is unlikely to grow out of its debt problem, especially in the context of a fixed exchange rate, and we see little scope for asset sales (privatisation) to pay off the debt. And there are limits to the size of fiscal consolidation on its own that would be needed to reduce the debt. We think it requires a primary surplus well in double digits which is not feasible or desirable. If, instead, we assume as reasonable a 4-5% primary surplus (as per the IMF’s adjustment scenario in the 2019 Article IV), compared with an expected small primary deficit last year (-0.3%), implying a 5ppt adjustment, we think this will mean that a significant contribution is still needed from domestic creditors and foreign bondholders. The majority of Lebanon’s public debt is domestic debt (63% of total gross public debt) while eurobonds amount to only 35% of the total (gross), albeit 94% of the public sector’s foreign debt and 54% of GDP. Moreover, total interest payments are a whopping 10% of GDP, although the average nominal interest rate is only about 6.7%.

Bond restructuring is, therefore, inevitable in our view. Our DSA suggests that a 50% nominal haircut would be needed on the bonds, in conjunction with a primary fiscal adjustment and domestic restructuring. However, domestic holdings of local government bonds and eurobonds mean that a domestic restructuring will need to balance the impact on domestic financial stability. While the eurobonds contain CACs, they lack aggregation which could frustrate the restructuring process. Upside risks include stronger-than-expected growth or lower interest rates, while downsides include political risks, implementation risks, the impact on the banking system and currency devaluation.

We assign a Hold to medium/long-term US$ bonds, with a current price of c29.5 (mid basis) for the 6.65% 2030, as of cob 24 February on Bloomberg. We expect a sizeable nominal haircut in a restructuring (our base case), which should depress expected recovery values in line with prevailing prices. We see upside if there is a lower nominal haircut, and/or higher coupons, and depending on exit yield assumptions, we recognise a robust and well organised creditor committee may be able to extract better terms. However, we also see downside risks given the amount of PSI that will be needed, conditioned on the policy commitment (either in or outside an IMF programme), programme implementation risks, the impact of default on the financial sector and the risk of devaluation.

We assign a Hold to front end US$ bonds, with the 9 March maturity priced at c53 (mid-basis) as of cob 24 February on Bloomberg. The 9 March maturity, and other front end bonds, pose particular challenges, although we think the risks are slightly more asymmetric – potentially less downside and more upside. We think there is a chance the March bond is paid, representing significant capital gain, in a short space of time. Paying the US$1.2bn on 9 March might be deemed a small price to pay in order to buy more time to come up with a coherent strategy. However, there isn’t that much time, ahead of other maturities, and hence, a reasonable chance the bond is not paid. If you have to restructure anyway, paying now would just waste reserves and merely defer the decision. In fact, we think the market is pricing in a probability of payment of only 20% (ie a probability of default of 80%), assuming a standard recovery value of 40 (although we note front end bonds may be able to get preferential terms in a restructuring). We think the market may be overstating the default risk, but prefer not to take this gamble – although a 50pts potential price gain compared to a c15pts loss could be interesting for the brave.

Christopher Dielmann and Hasnain Malik contributed to this report.