Lebanon is still a gamble

The note below was originally published in an earlier form as part of our IMF/World Bank Annual Meetings summary report on 27 October.

Lebanon is a long way from resolving its economic and political crises. Since securing a staff-level agreement with the IMF in April, the government has not yet implemented any of the 10 prior actions outlined by the IMF. The recent approval of reforms to the bank secrecy law was a step in the right direction but fell short of what is required by the IMF, with parliament now exploring further amendments to bring it in line with programme requirements.

Meanwhile, the government’s recent announcement of a plan to devalue the currency to 15,000/US$ from the current official rate of 1,507/US$ is unlikely to satisfy the IMF’s requirements for a unified and freely floating exchange rate, with the rate sitting well below the black market rate of c40,000/US$ and Sayrafa rate of 30,000/US$. Much more work needs to be done to formulate a sustainable FX policy, and it is not clear if the government will commit to a flexible currency or simply re-peg a new rate, which would cause imbalances to quickly build back up.

We still think that the key sticking point, however, is the banking sector restructuring. There still seems to be little, if any, agreement on the path forward. While the SLA calls for the restructuring to recognise the losses up front “while protecting small depositors and limiting recourse to public resources”, this will require large depositors and banks' shareholders and creditors to all be bailed in and will result in the closure of many smaller banks. With Lebanon’s politicians still trying to protect these key constituencies, there seems to be little prospect of the restructuring moving forward.

Against this backdrop, Lebanon’s economy will continue to be moribund. Public sector service delivery in Lebanon has collapsed almost completely, and ordinary citizens have limited access to their savings and have been forced to survive off of under-the-mattress savings and/or remittances. However, under the current regime of capital controls, the drawdown of reserves has been limited this year and FX reserves are still sufficient to cover nearly eight months of imports, which alongside a surprising lack of social unrest has seemingly reduced the urgency to tackle the current crisis.

With parliament due to select a new President at the end of October, some people expressed hope that there could be renewed reform momentum under fresh leadership. However, parliament has so far failed to agree on a replacement, creating a power vacuum since President Aoun’s term expired on 31 October. In any case, Lebanon’s sectarian political system and hopelessly divided parliament will continue to preclude any meaningful change.

The recent maritime deal with Israel could also provide a ray of hope in the long term, but is still many years from delivering any benefits even if it holds together (which is a big if), and there was some concern that the promise of future resource revenue could reduce the urgency for reforms.

The key point is this: Lebanon’s international partners, including the IMF and bilateral donors, are unwilling to bail out Lebanon until their government has implemented the reforms laid out under its IMF programme, nor can engagement with creditors take place without a track record of reform. Unfortunately, there seems to be little willingness and/or ability for the government to implement even the most basic reforms, never mind the political minefield that is the banking sector restructuring.

Three years after the start of what the World Bank has dubbed one of the three worst economic crises in the globe since 1850, Lebanon’s politicians have continued to callously place their own self-interest above the needs of the nation. Sadly, there is no indication that this will change anytime soon. While the interest of some investors has been piqued by eurobond prices of cUS$6.5 across the curve, Lebanon is as likely to become a permanent pariah state as it is to complete the restructuring process. As we’ve seen since the start of the crisis, bonds can always go lower, no matter how cheap they look.

As such, we retain our Hold recommendation on Lebanese eurobonds. While some investors may be tempted to dip their toes in given the prospect of a >50% return at a mindboggling low cUS$10 recovery value, they will have to be comfortable holding the bonds for an unforeseeably long period of time and accepting the risk that returns could exceed -50% at the equally plausible cUS$3 recovery value, or that recovery may never even happen at all. As such, any bet on Lebanese eurobonds shouldn’t be seen as anything but a gamble, and should only be done in extremely small size. 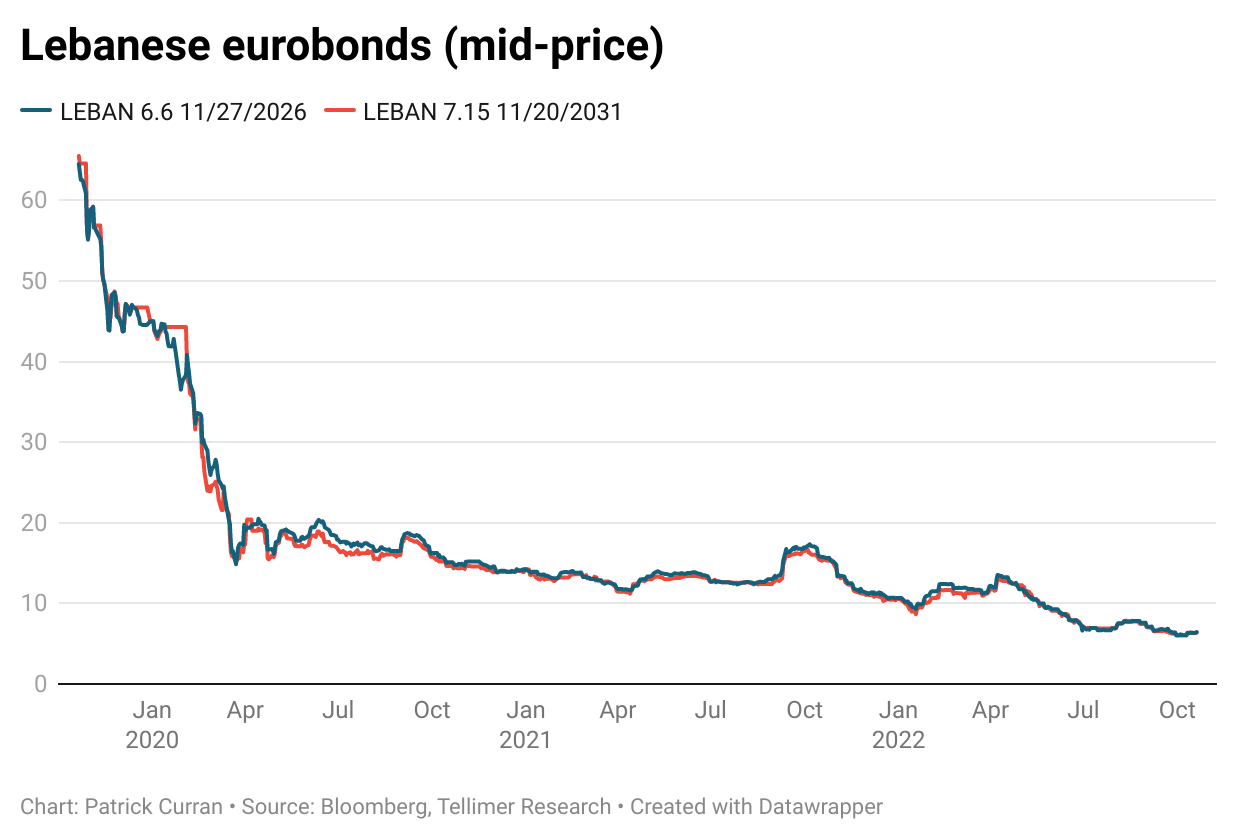