In an interview this week, Deputy Prime Minister Saade Chami expressed optimism that the government could secure an agreement with the IMF before the parliamentary election, which is scheduled for 15 May. An IMF delegation is in Beirut this week on a mission, which Chami hopes will conclude with a "Memorandum of Economic and Financial Policies" that outlines the prior actions needed to secure a programme, which Chami said could include up to US$5bn of funding and unlock US$11bn in support from other sources.

For the first time since the economic crisis began in October 2019, there has been some notable reform momentum. After convening for the first time in 3 months in January, parliament passed a law in February to reform failing state utility EdL by immediately hiking electricity tariffs from just c1 cent/kWh to c10-18 cents and investing US$3.5bn in the coming years. The plan aims to boost power supply from just 3-4 daily to 8-10 hours by year-end and 24 hours by 2026, while also breaking even by 2023 and turning profitable by 2024 via higher tariffs, reduced technical losses, and improved bill collection.

The government also approved the 2022 budget in February, which Prime Minister Najib Mikati said will pave the way for more advanced reform discussions, and referred a draft bill to set up formal capital controls to parliament for approval this week. We understand that these are both prerequisites for an IMF programme, with Moody's estimating that US$5.4bn exited the banking system from January 2020 to September 2021 despite de facto capital controls, even as ordinary citizens have been prevented from accessing their life savings.

That said, other prior actions are much thornier, namely a decision on how to distribute losses to revive its moribund banking sector. A leaked restructuring plan in February puts the bulk of the burden on depositors, and there is little sign of consensus on how to share the estimated US$69bn of financial losses among stakeholders. There is also little evidence that the required central bank (BdL) audit is near completion, as criminal investigations into BdL Governor Riad Salameh intensify at home and abroad. Lastly, there is little clarity on plans to adopt a unified exchange rate, another key IMF prior action.

Lebanon will also have to demonstrate that it has undertaken good faith negotiations with creditors before the IMF agrees to a programme — unless the situation is so bad that it makes restructuring a prior action. PM Mikati has said that Lebanon will begin talks with eurobond holders after it finalises the economic recovery plan currently being discussed with the IMF, but we think a lack of creditor engagement will make it difficult to finalise the programme and could irk bondholders if they feel like they were not given a chance to provide input into the assumptions and terms of the reform and restructuring plan.

Overall, we think yesterday's headlines that an IMF programme may be imminent are premature. Despite recent reform progress, there is a lot of heavy lifting that still needs to be done on some of the more contention reforms. This includes the government's financial sector restructuring plan, which the Association of Banks expressed its opposition to last month. We think comments from IMF Spokesman Gerry Rice in its 18 March press briefing sum up the situation well: "Extensive work is needed in the period ahead. Lebanon's challenges are deep and complex, they will require time and a commitment."

The situation is further complicated by the impending elections. While Deputy PM Chami expressed optimism that a staff-level agreement with the IMF could be reached before the mid-May elections on the basis of the preparation of draft laws for the newly elected parliament to enact, the IMF typically has an aversion to finalising programmes ahead of elections and may prefer to wait until a new government is in place, unless it sees this as a special case. That said, a staff level agreement before an election allows it to be pragmatic

Lebanon's difficulty forming governments (with four Prime Ministers since former PM Saad Hariri's resignation in October 2019 and a 13-month gap prior to the formation of the current government – see related reading for more details) means that it is by no means guaranteed that a new government will be formed quickly after elections, never mind one with the mandate to push forward with an ambitious reform agenda.

Election uncertainty is exacerbated by the decision of both former PM Hariri and current PM Mikati not to run in elections, leaving a power vacuum in the Sunni political community that is meant to fill 27 parliamentary seats and the seat of PM per Lebanon's confessional political system. While PM Mikati has been clear that elections will be held on time, there is still a risk that political squabbling either delays elections or undermines the formation and/or legitimacy of a new government.

Eurobond prices have been relatively stable since mid-February, with the LEBAN 7.15 11/20/2031s trading around US$11.5 after dipping as low as US$8.65 earlier in the year. This compares to recovery values of cUS$9-18 at exit yields of 8-16% based on the government's now woefully out of date April 2020 restructuring plan (which includes a 75% nominal haircut, 3% coupons, and 5-year grace period).

This means bonds are likely trading at the lower end of recovery value, with some material upside at lower exit yields (which one might reasonably expect after such a drastic debt reduction). And with past-due interest of 14.3pts and a current yield of c63% based on annual coupons totalling another 7.15pts, one could argue that near single-digit pricing offers a compelling entry point.

However, we would caution against buying on the basis of yesterday's IMF headlines, as we think a programme is unlikely ahead of the 15 May election and the post-election reform outlook is highly uncertain.

There is also little clarity on what an updated restructuring would look like (although we assume the April 2020 restructuring plans are a reasonable guideline, since debt/GDP hasn't changed much since). While it is hard to imagine haircuts exceeding 75%, there are still plenty of other ways to potentially erode the present value (longer maturity extensions or grace periods, lower coupons, not capitalising PDI, etc).

Without more clarity on the government's debt restructuring plans and the assumptions and outputs of the IMF's eventual Debt Sustainability Analysis (DSA), any attempts at calculating recovery value are highly speculative.

Against this backdrop, we maintain our Hold recommendation on Lebanon's eurobond curve at US$11.4 (61.2% YTM) on a mid-basis as of cob on 30 March on Bloomberg. 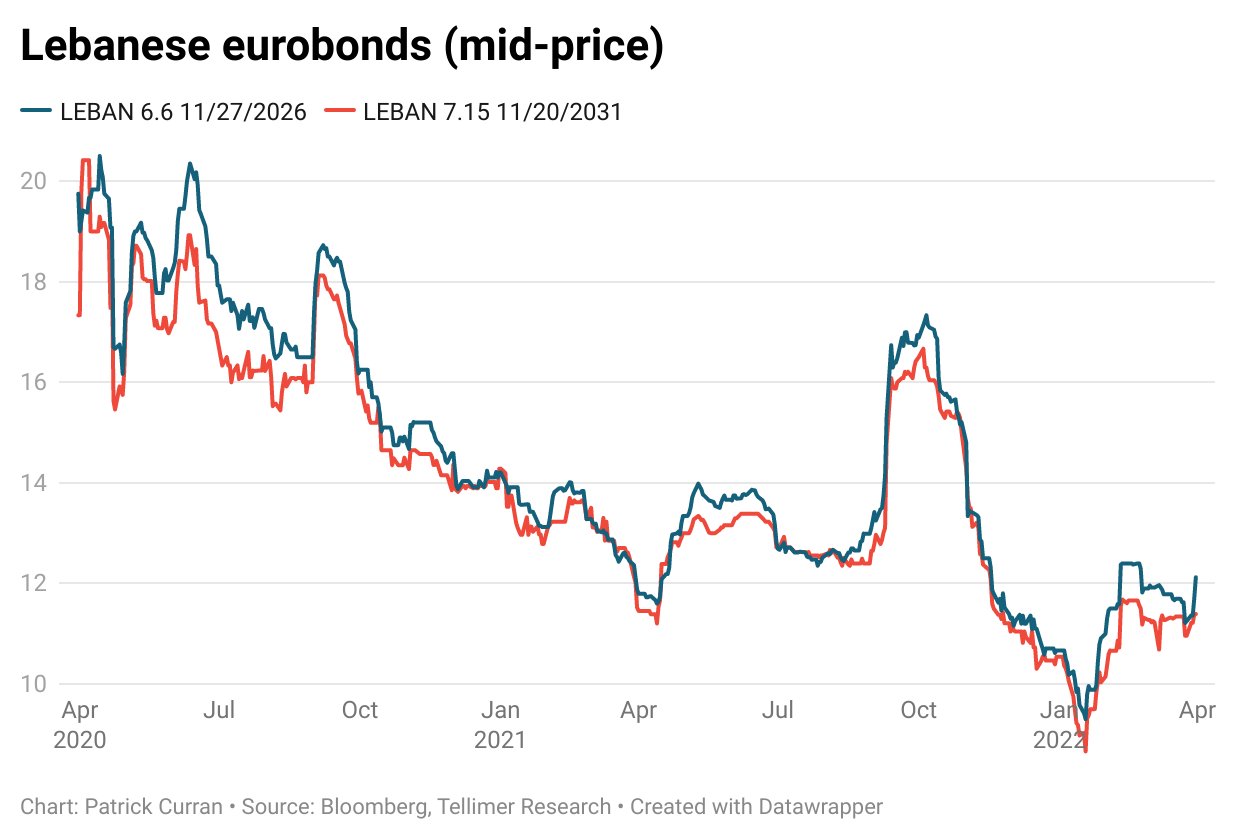 Back to square one as prime minister resigns, September 2020

Lebanon restructuring on pause as we await a new government, August 2020

Beirut explosion another tragic blow to a country in crisis, August 2020

At the precipice as leaders pass the buck, July 2020