Lebanon: Brinkmanship before bailout, only if history repeats

Even by its own standards, Lebanon is in some distress with protests over US$ shortages and parallel market discounts of over 5% compared to the official (US$-pegged) FX rate. The central bank has responded with a commitment (on 1 October) to provide sufficient US$ to secure imports of fuel, medicine and wheat.

Investors are pricing in this distress. Sovereign bond yields are among the highest in the emerging and frontier universe and the price/book of the equities index is cheaper than it has been during every crisis since 2004, with exception of the Israel-Hezbollah war of 2006.

Precedent alone points to domestic unity and/ or external bailout

In other words, investors do not believe the bailout from Lebanon's tradition sources (diaspora remittances, follow through on multilateral pledges like CEDRE, ad hoc bilateral assistance from the GCC) are coming, or that the ultimate unification of Lebanon's multiple confessional-based political groups at a moment of extreme stress is forthcoming. Investors are implicitly saying this time is different; at least, as far as preserving the US$-peg is concerned.

We have nothing to add to our previous fundamental assessment of the "Lebanon paradox": its confessional-based political system keeps the country together but stops it from moving ahead with reform; its external geopolitical sponsors (as diametrically opposed as its domestic factions) serve to both fuel destabilisation and provide bailout; its government debt is unsustainable but its access to remittances is almost unique. The arithmetic of debt sustainability never seems to add up but the reality of geopolitics has historically fashioned a way to square the circle.

Our view of sufficient domestic political will or external support to avoid a complete collapse (i.e. a failed state on Israel's border, a free-for-all for the region's multiple proxy militia) remains in place. But that is not the same as arguing that the currency peg is preserved (or remains workable without FX rationing). The state does not fail simply because of an FX crisis or if, for example, the banks are coerced into taking on government debt at an artificially low yield.

The key question is to what degree Lebanon's rival domestic and foreign vested interests are prepared to accept an economic failure? Without any visibility over behind-closed-door discussions (e.g. on fiscal reform sufficient to release CEDRE pledges), we cannot answer this. We suspect that protests and a loss of confidence in the US$-peg will bring these interests together but that is based on an appeal to precedent alone. It appears that most investors have already decided not to hang around to see if this scenario plays out.

Bonds: 10-yr US$ yields are standing at around 13.5% (the third highest among the emerging and frontier universe), having risen sharply since August, and are higher at the front end. The inverted yield curve reflects market concerns over imminent debt distress.

Equities: The Blom equity index (mainly Banks – Blom and Audi – and Real Estate play Solidere) is down 11% ytd in US$ total return terms and is valued on trailing Price/Book of 0.5x (with trailing ROE of 11%), which is a 40% discount to the 5-year median. The Banks are on 0.5x trailing PB (with 16% trailing ROE), 3x trailing PE and 15% trailing DY.

The Blom equity index trailing PB has ranged 0.8x to 1.1x during every previous moment of crisis in Lebanon (dating back to the assassination of Rafik Hariri in 2005), with the exception of the drop to 0.3x during the Israel-Hezbollah 34-day war in 2006.

It seems unlikely that Lebanon will be able to turn to the IMF for a bailout, as we might usually expect in these situations, given the high debt burden (150% of GDP), questions over debt sustainability and appetite for a much stronger fiscal adjustment. And if the peg goes, the debt burden will balloon even more (although a more realistic exchange rate may help boost competitiveness). This makes the country even more dependent on the donors. Yet, as we’ve seen with delays to the US$11bn in concessional funding pledged at the CEDRE conference in April 2018, this is no panacea. 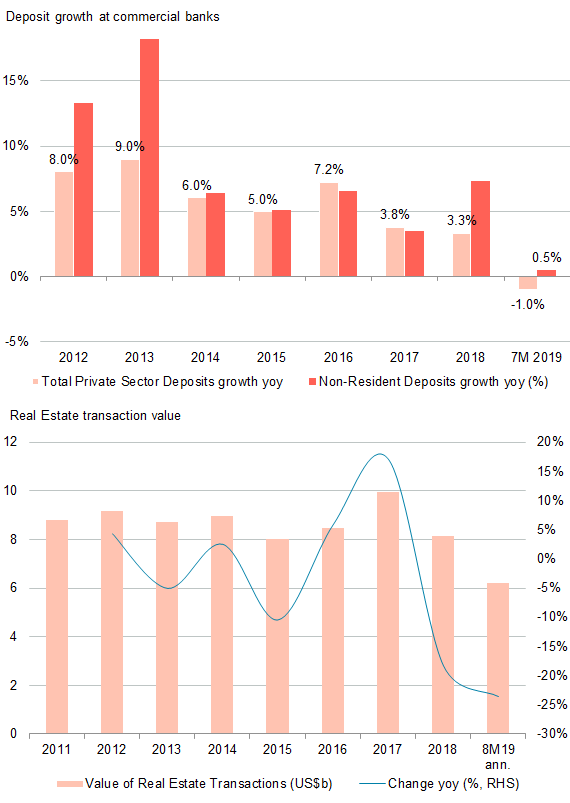 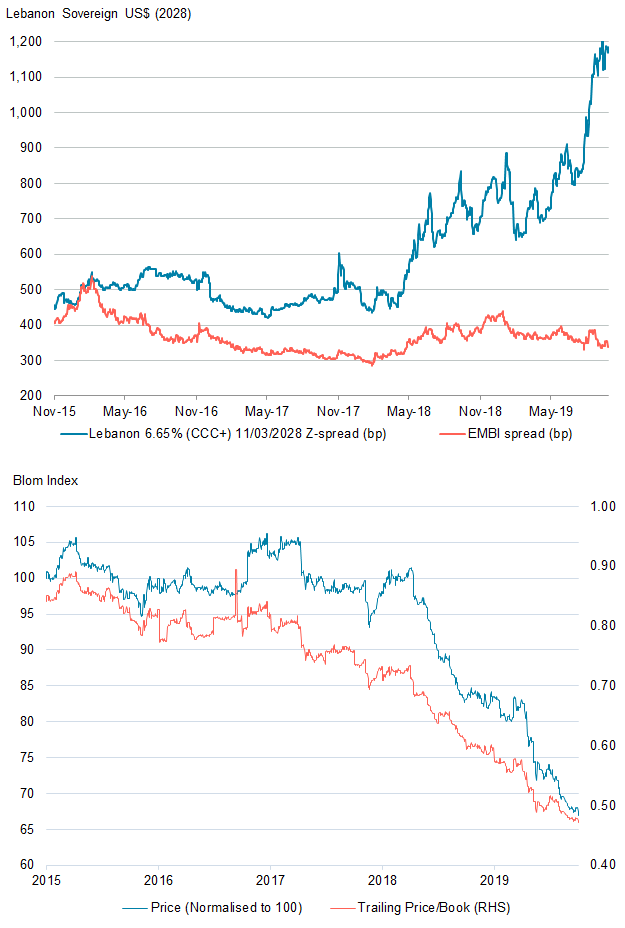 Lebanon: New government is welcome, but not a panacea, 31 January 2019