Brazil: Brazil traders have a lot to look forward to today, with a number of potentially market-moving data prints scheduled for release. Undoubtedly the most important will be the mid-month inflation report, which will offer some fresh insight into the potential path of monetary policy.

Expectations are that the mid-month inflation print could show a short-lived slowdown in inflation. Economists polled by Bloomberg forecast inflation growth of 0.85% m/m in the first two weeks of March compared to 0.99% m/m in the mid-February print as the pressures of education costs wane and ahead of the full impact of the sharp increase in domestic fuel prices, which were announced on March 11.

Mexico: Banxico raised its interest rates for a seventh consecutive time yesterday, citing higher inflation expectations, the tightening of global monetary conditions, and uncertainty stemming from the Ukraine conflict. The five-member board of governors voted unanimously in favour of a 50bps interest rate increase in the overnight interest-rate target to 6.5%, taking it to its highest level since April 2020. While the decision had been widely expected in the market, it was made known hours before the official announcement by President Lopez Obrador at his daily press conference. Never before has a monetary policy decision been leaked in Mexico. It is unfortunate, mainly because the bank has a new governor, whom Obrador picked and has drawn criticism over the bank’s autonomy. Following the rate decision, Obrador said he thought the interest-rate decision had been made public and offered an apology to the central bank governor and deputy governors.

Colombia: Data released yesterday reflected a general consolidation of economic sentiment in February, likely owing to the surge of COVID-19 infections at the start of the year, high inflation, and rising interest rates. Specifically, the retail confidence index dropped from 39.5 to 37.4 in second month of the year, marking its worst reading since July. Meanwhile, the industrial confidence index rose marginally from 12.7 to 15.5, with a lagged impact on the industrial sector evident as oil and commodity prices remained elevated. Further consolidation in sentiment is expected in the months ahead, pointing to a slight slowdown in economic activity through 2022.

Chile: The Central Bank Traders Survey made for interesting reading yesterday. The trader community has become exceptionally hawkish on its outlook for monetary policy expecting the BCCH to hike by 200 bpts at next weeks meeting taking the benchmark interet rate to 7.5%. The market expects a further 50 bpts worth of hikes within a 12 month period. On the inflation front they do see the print topping out at 7.4% for the 12 month period, which remains well above the BCCH’s target range of 2-4%.

The Finance Minister Mario Marcel yesterday stated at a conference in Santiago that inflation is in an upward trend, which was underpinned by the PPI release which showed the Feb reading at 2.5% versus 0.1% in January. Factory gate inflation will undoubtedly make its way into the consumer bucket as producers cannot compress margins forever.

The broader investment community is currently very much of the opinion that the next 12 months will be a period of slowing growth and higher inflation. What is not certain, especially from an inflation perspective, is what happens post the 12 months. There is a growing school of thought which suggests that we could be in for a period of deflation as demand destruction and base effects take hold

Peru: Kicking things off on the mining protest front, communities that have blocked operations at the Southern Copper mine Cuajone have agreed to hold talks this weekend and discuss the government proposals that are aimed at resolving the protests. Any headiness out of this will be eyed closely as it could set a precedent to end other protests that are happening around the country. However, one of the key sticking points for these particular protests is the use of water at the mine, which the community believes is drying up the wetlands around them and limiting their access. Such an issue will not be easy to resolve and could take several months.

The day ahead, meanwhile, promises little in the way of local data, with just an economic survey to be published by Bloomberg. Investors will, however, be bracing for Monday's impeachment debate against President Castillo. As such, there will be a lot of political noise over the weekend, with Castillo yesterday trying to warn his supporters that a destructive media campaign will start against him.

Forex: CLP has room to rally as traders price in a big hike next week

Brazil: While the BRL ended Thursday’s session relatively flat against the USD, the broader bullish bias in the local currency remains intact, with the USD-BRL hitting an intraday low of 4.7653 before paring back its gains to close the day at 4.8268, according to Bloomberg data. While the massive rally in the BRL this week has prompted traders to ramp up their hedges on the currency, the BRL is still significantly undervalued and will continue to benefit from high interest rates and the sustained rally in commodity prices. Therefore, we still see room for further appreciation in the BRL in the session ahead.

Mexico: The MXN strengthened to 20.0906/USD on Thursday, closing at its strongest level since late September. Banxico’s hawkish rhetoric was well received by the market, despite an early announcement by the president that shocked the market. Nonetheless, the rate hike has bolstered the local currency, targeting the psychological 20.00/USD handle ahead of the weekend. It is worth noting that the MXN has rallied roughly 3% this month, retracing February’s losses but could correct if it cannot punch through the key resistance. On the other hand, if sellers book profits in anticipation of a reversal, the 200DMA at 20.4200/USD will be the first major support.

Colombia: After selling off to an intraday low of 3816/$, the COP recovered to close yesterday's session around 3788/$. This still amounted to a small 0.10% depreciation on the day, although this was more consolidatory than anything else. The currency has managed to stick below the 3800/$ mark for three consecutive days now, supported by improving sentiment and elevated oil prices. These factors will remain important into the weekend, and may determine whether the COP can hold onto its week-to-date gains.

Chile: The peso remained on the front foot yesterday as investors now priced for an aggressive stance to monetary policy from the CB next week. Traders are expecting as much as 200 bpts worth of hikes next week which would certainly improve the carry of the currency. For now selling the upticks on the USD-CLP is favoured.

Peru: The PEN rallied strongly yesterday, rising through the 3.7500 level to the USD to end the day at its strongest level since 17 March. This may have been a result of thin liquidity conditions, and we could see another notable swing in the session ahead as investors position for the weekend, which could see some market-moving news emerge regarding the Russia-Ukraine conflict. Investors may also look to close out their positions ahead of the impeachment debate on Monday

Brazil: Comments from BCB Campos Neto saw swap traders trim their interest rate hike bets on Thursday. Rates across the swap curve were received yesterday after the central bank president signalled that the BCB is likely to end its hiking cycle in May with one more 100bps rate hike. For context, the shorter-dated 2yr swap rate shed 30bps to end the session at 12.16%, while the longer-dated 10yr rate fell 7bps to 12.04%. Looking at the session ahead, swap traders will be honed in on the mid-March inflation print. A surprise inflation reading will almost certainly result in price action in the swap market.

Mexico: Yesterday was a bearish day for Mexican bonds. Front-end bond yields rose following the central bank’s rate hike, underperforming those on the belly and the long-end of the curve, which responded to policymaker's inflation expectations and an uptick in US Treasury yields. This mainly had to do with the rate decision being well priced in. The central bank has left the door open for further policy tightening, which at this rate could see the yield curve maintain a bear flattening bias unless growth picks up significantly in the short term, which is unlikely at present.

The market is still pricing further rate hike risk, with a payer bias seen on the 2yr swap out to the 30yr tenor. The performance of the MXN and the likely commodity shock in the coming months will determine how much interest rate hike risk is priced in by markets. Traders have pencilled in an accumulation of more than 130bps of rate hikes this year, which remains somewhat justified given Mexico’s inflation outlook..

Colombia: Colombian bonds remained on the defensive on Thursday, with yields continuing to rise across the curve as investors braced for an accelerated tightening of global financing conditions. Moves have been more pronounced at the short end of the curve, which is consistent with positioning for a more aggressive monetary tightening trajectory as reflected in the IRS market. The inverted IRS curve has continued to rise in recent sessions, pointing to a front-loaded rate-hike cycle that may be unwound sooner than previous cycles once inflationary pressures ease and growth headwinds become too strong.

Chile: Swaps were paid higher across the board yesterday with the most aggressive paying reserved for the belly and longer end of the curve. The 10yr shed just short of 20 bpts on the day, while the 20yr finished around 21 bpts weaker on the session. 2yr finished 16.5 bpts weaker on the day, according to Bloomberg data. Movements in the US Treasury curve coupled with comments by the FinMin at a conference in Santiago all playing a part in driving the market higher. Bias continues to favour the payer side of the equation into the weekend.

Peru: The theme of higher yields continued yesterday, with local bonds weakening once again across the curve, tracking the rise in core market yields. This could continue through the session ahead, with global investors also likely to reduce some of their riskier exposure to Peru ahead of Monday's impeachment debate. The market has still not priced in a high possibility of Castillo being impeached, suggesting that assets will be subjected to some notable volatility if he is removed from office. 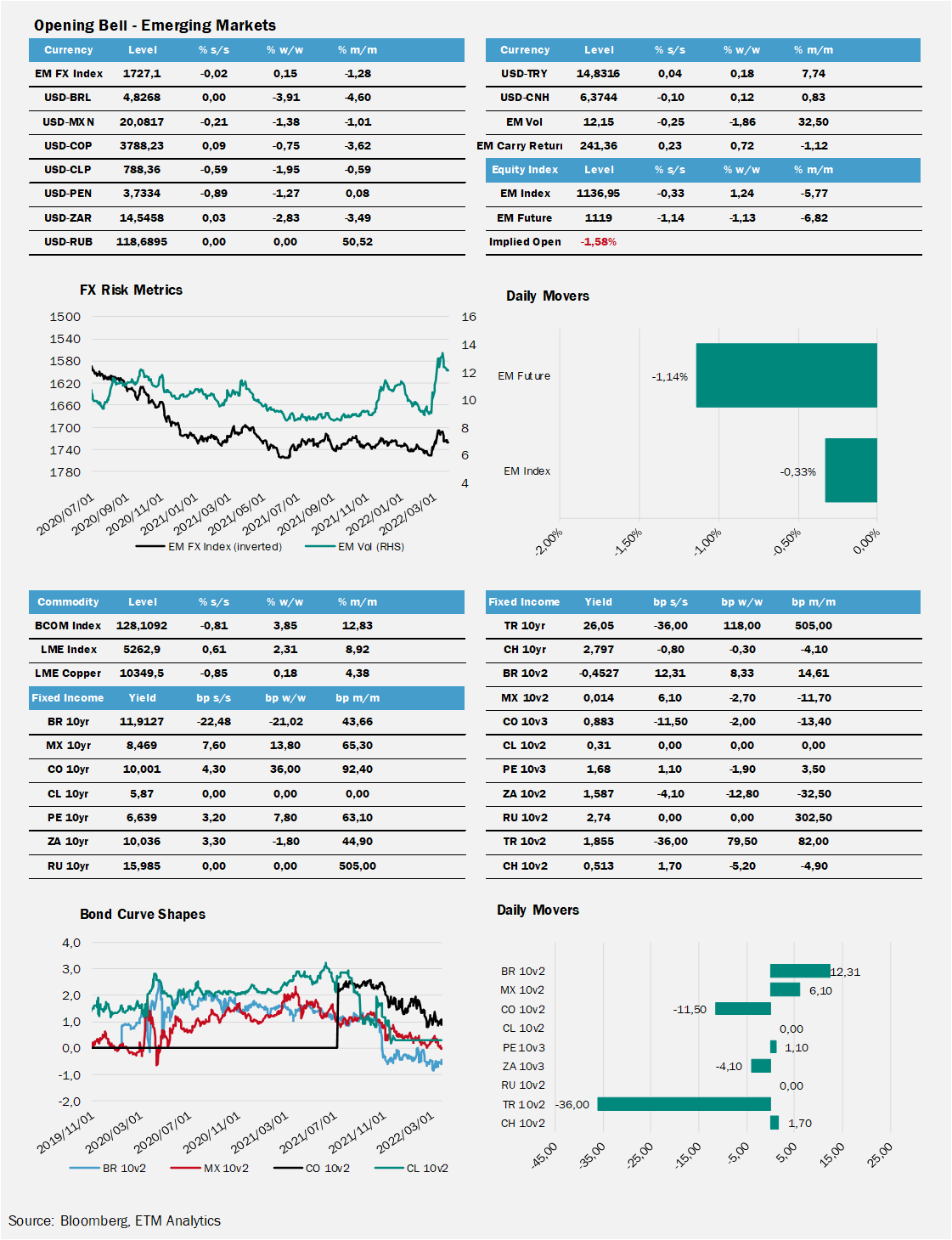 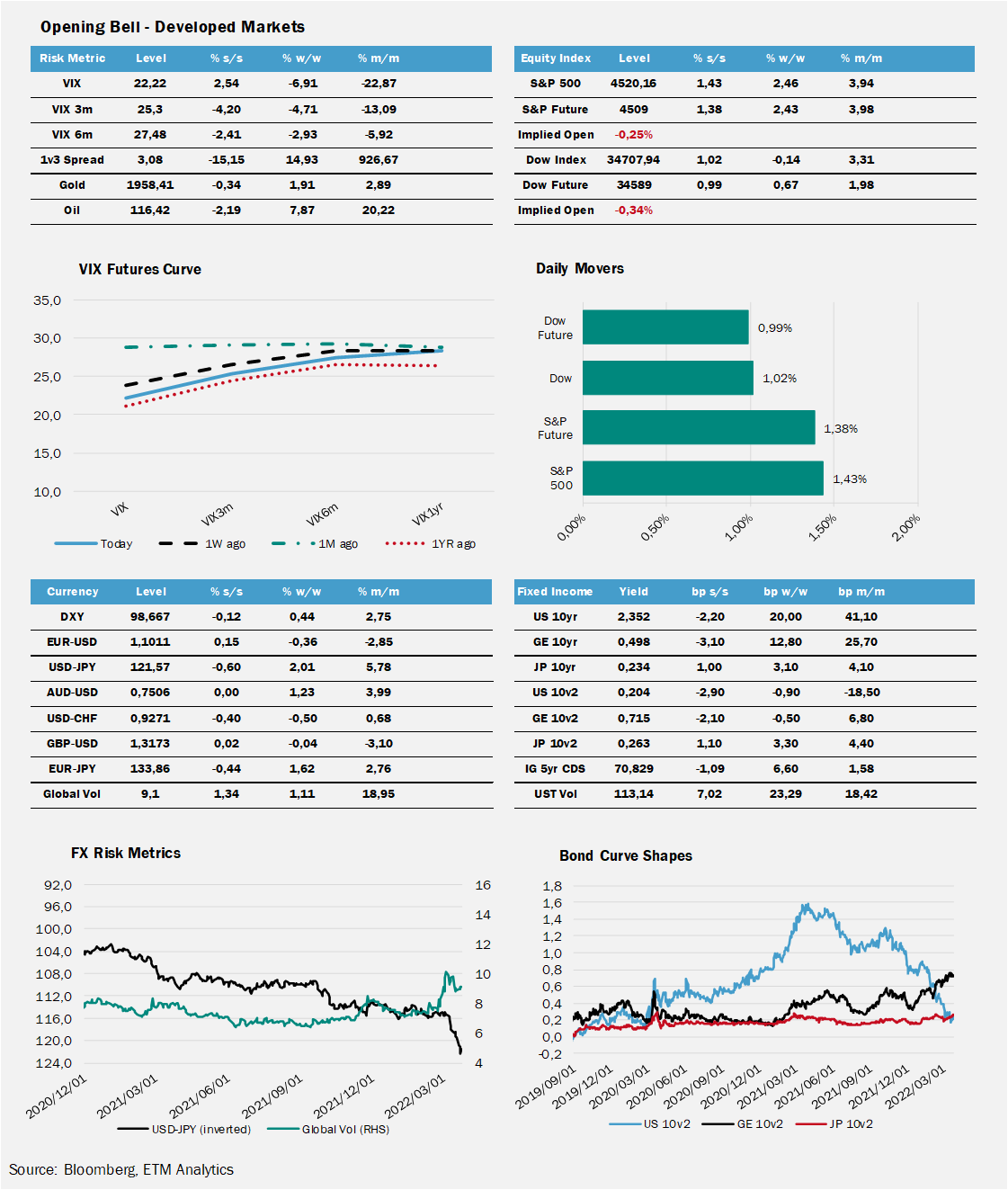