Talking Points: Politics heating up in the Andes

Brazil: The Lower House began an analysis of changes to the ICMS tax on fuels on Wednesday. The bill being discussed proposes fixed values to the ICMS tax on fuels. Lawmaker Jaziel Pereira said that the ICMS tax rates for each product would be limited to the average value of the final consumer prices of the two previous years. If approved in the Lower House, the bill will still need Senate approval. Lower House Speaker Arthur Lira said that the bill could reduce gasoline prices by 8%. This would undoubtedly help ease some pressure on the wallets of consumers.

Mexico: With a shortage of economic data yesterday, comments by a central bank member and Mexico’s Foreign Minister headlined the local news flow. Consumer prices in Mexico are rising rapidly and might not peak until the end of 2021 or early 2022, requiring an appropriate response by policymakers, according to comments made by Deputy central bank Governor Jonathan Heath. In a podcast yesterday, Heath said that both internal and external supply shocks have led to an upward inflation trend, leaving no room for expansive monetary policy. The central bank has hiked its key interest rate a quarter-point at each of its last three meetings, generating expectations that borrowing costs will hit 5.25% by year-end from the current 4.75%. Banxico is among one of many central banks across Latin America that are tightening monetary policy in response to quickening inflation as economies open back up. For context, Chile hiked its benchmark interest rate by 125bps to 2.75% yesterday in their effort to anchor inflation expectations

Colombia: President Ivan Duque said he was aware of the recent cases of the mysterious illness known as "Havana Syndrome" that were reported at the US Embassy in Bogota. US and Colombian intelligence agencies are investigating these cases just days before US Secretary of State Antony Blinken is set to arrive in the country. The illness manifests in unexplained nausea, dizziness, and memory loss, and is suspected to be a result of sonic or microwave weaponry. Other than that, news flow out of Colombia is rather thin at the moment, with the data card also clear until tomorrow's release of manufacturing production, retail sales, and industrial output stats for August. The market's focus will thus likely remain on external drivers and oil-price dynamics

Chile: Politically, things are hotting up with opposition lawmakers moving to impeach the current President Sebastian Pinera after the Pandora papers have raised a potential conflict of interest in the sale of his family interests in a mining project. Bloomberg reported that the Pandora papers revealed a contract signed in the British Virgin Islands in 2010 regarding the sale of a stake in a $2.5 billion iron ore project called Dominga by Pinera’s family. Part of the payment was conditional on the government not declaring the area a nature reserve. Pinera was serving his first term as president at the time, with the ultimate word on any change in status for the zone. A government spokesperson has labelled the accusations as baseless ahead of the elections.

Peru: Local newsflow and data remain thin at the moment, with the data card empty until tomorrow's economic activity index and unemployment rate releases. Looking at the former, it is expected that activity likely continued to rise on a y/y basis in August. We could see it slow compared to July's figures, but this would be merely a result of base effects. When looking at the m/m comparison, growth in activity should continue to have accelerated, driven by mining, retail and services as the economy continued to reopen and more people were vaccinated. Activity should remain below pre-pandemic levels, however, we could see a continuation of the upwards trend as there was another round of government handouts in September, bolstering the retail sector

Brazil: It was a turbulent day of trade for the BRL yesterday with the local currency whipsawing between positive and negative territory to finally end the session in the green. Specifically, after hitting an intraday higher of 5.5730, the USD-BRL pulled back to closed the day 0.43% lower at 5.5154. As seen yesterday, the BCB remains committed to defending the BRL during times of significant deprecation, with the central bank intervening with an extra FX swap auction. In addition to a second FX swap auction, the BCB also announced that it will conduct another FX swap auction today. This underscores the central bank’s commitment to act as a backdrop for the BRL during times of distress.

Mexico: The USD-MXN lost some ground yesterday, falling further from its six-month high to below the 20.600 mark, opening the door for the pair to test the 20.200 technical support. The MXN bulls were supported by a broad decline in the US dollar amid falling UST yields. The USD has retreated to session lows today, allowing riskier assets to recoup some of their recent losses. There are still many reasons that would justify the USD heading back towards stronger levels once more, particularly given the contagion of the Evergrande crisis and commodity prices that are no longer as buoyant as they were courtesy of slowdown fears.

Colombia: The COP was one of only a handful of EM currencies to depreciate yesterday, as it tracked oil markets lower with a 0.60% decline back towards the 3750.00/$ mark. This occurred despite a falling USD through the session, reflecting just how important the recent rise in oil markets and persistent global inflation fears have been for the COP. Notwithstanding yesterday's decline, the COP remains strong and with oil prices on the rise again this morning, it may recover yesterday's losses into the weekend.

Chile: The question now is, as with the bond market, what will the response to the rate hike be given that the CLP is not a CLSA cleared currency and does not trade after local closing, thus it has not been able to fully absorb the hawkish actions of the Central Bank.

Peru: The PEN has now gained just under 4% since Castillo's cabinet reshuffle last week, with it rallying further yesterday to close below the 4.000 handle for the first time since he took office. With the USD still under pressure heading into the NorAm open today, the PEN may extend its gains and look to break back below the 3.95000 level. These gains will be alleviating some pressure on the BCRP, but the currency is still down over 10% this year to suggest that its impact on inflation will still be fairly significant.

Brazil: While Brazilian bonds have sold off sharply this year, the bearish bias seems to be waning, with yields across the curve edging lower in recent sessions. Although inflation and political risks remain elevated, much of this is priced in and as such, any positive news or developments will result in a further correction lower in Brazilian bond yields. That said, we still expect a significant premium to remain baked in in the months ahead.

Mexico: Mexican swap rates were down 2bps - 10bps on Wednesday, in line with a stronger MXN and falling UST yields. Short-term swap rates, specifically the 1m swap out to the 1yr, were relatively unchanged. A more pronounced receiver bias was noted further out, with the 20yr swap leading the way lower. The curve is pricing in slightly less than 50bps of rate hikes in the rest of 2021, with two central bank meetings left. Investors will now turn their attention to Banxico’s meeting minutes today to tweak their interest rate expectations. The minutes will highlight a divided board on the future trajectory of interest rates. Deputy Governor Gerardo Esquivel has commented that rate hikes can be counterproductive in managing inflation under current conditions, as they signal the situation has become permanent and opposed rate hikes in the previous three meetings.

Colombia: Colombian bonds generally consolidated on Wednesday, with moves of less than 1bps recorded across most of the yield curve through the session. Investors are still weighing the impact of high oil prices on Colombia's economic growth and fiscal outlooks against broader concerns over global inflation. These dynamics continue to favour flattening of the yield curve, which could be exacerbated by the recent decline in long-end UST yields.

Chile: There was an element of bearish flattening on the bond curve yesterday ahead of the BCCH decision to hike rates. The 2y closed around 28 bpts higher on the day at 4.94% in anticipation of a hawkish outcome. The question is now whether or not we see additional pressure on the front end today given that the bank hiked by more than market expectations

Peru: Peruvian bonds continued to firm yesterday as the markets still cheer on the shift to a more moderate policy stance by President Castillo. We also had some profit-taking on the USD and a shift lower in US bond yields following the CPI report to support the move lower for local bond yields. The bullish momentum does seem to be fading, however, as yields at the belly and back-end of the curve are now back near levels seen before Castillo took over the presidency. This suggests that the recent flattening trend for the curve may also be coming to an end. 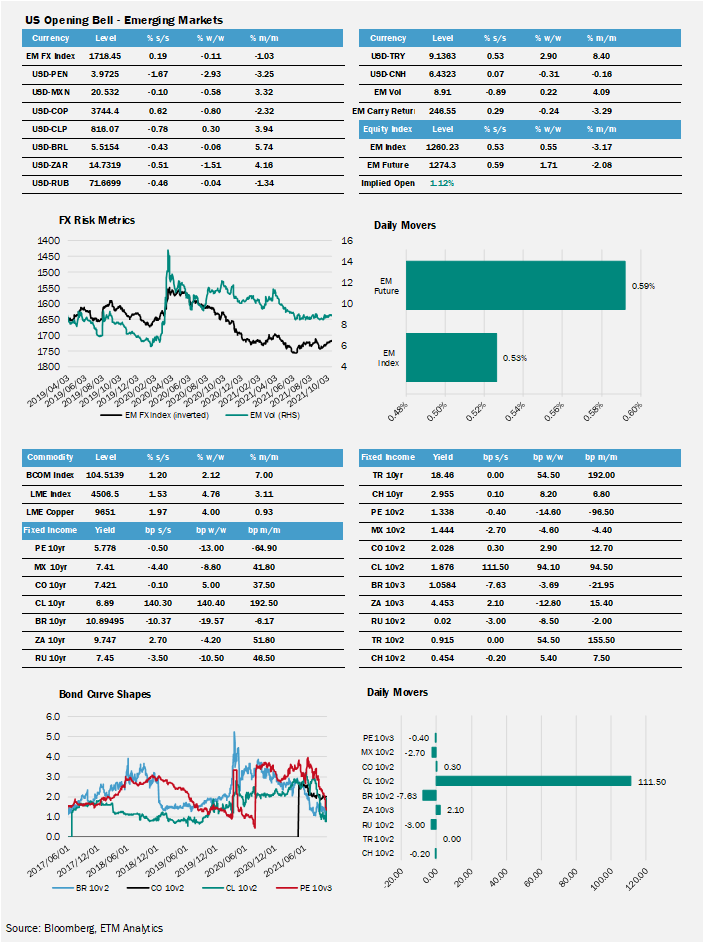 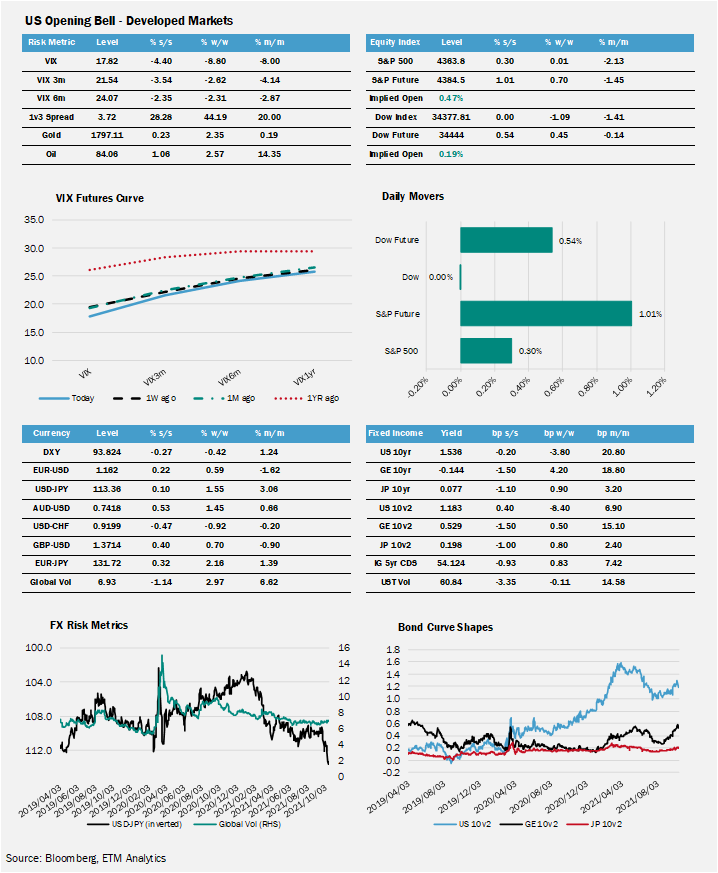