Brazil: Special Treasury Secretary Esteves Colnago and Treasury Secretary Paulo Valle are scheduled to hold a press conference at 17:00 local time to discuss the results of the 2021 budget bimonthly report on expenses and revenues. This should provide some more insight into fiscal dynamics in Brazil. Given the sensitivity of financial markets to fiscal dynamics at the moment, any notable developments will likely lead to some fresh price action for domestic assets.

The spending cap breach and lack of prudent fiscal policy has resulted in a significant underperformance of domestic assets in recent months. Brazilian assets across the board, including bonds, swaps and the FX market, are pricing in a significant amount of risk and pessimism. With the 2022 Presidential election fast approaching, the Bolsonaro administration has adopted a more popularist approach, which suggests that we are unlikely to see any fiscal reform before the election.

Mexico: The Bank of Mexico's governor Alejandro Diaz de Leon said on Friday that the most complex scenario for the bank would be to face the inflationary challenge and normalisation of US monetary policy in an intense and simultaneous manner. Recall that Mexican consumer prices rose 6.24% y/y in October, twice Banxico’s inflation target of 3% plus or minus one percentage point, which led to a hike in the benchmark interest rate by 25bps earlier this month for the fourth straight policy meeting. Banxico will publish the minutes of the November monetary policy meeting this week, which should show that some members of the Governing Board weighed the possibility of a rise of more than 25bps in the benchmark interest rate. Likewise, the minutes may suggest a higher rise at the next meeting, if the inflation outlook deteriorates further. The board members may explain why inflation risks have increased and are likely to refer to signs of permanent pressure on prices and inflation expectations.

Colombia: The Colombian data card starts the week with the release of industrial and retail confidence data for October. Recent prints have pointed to a continued improvement in general economic sentiment in the country, with both indices trending higher in recent months. On the whole, Colombia's economic recovery is still expected to continue on a relatively strong footing into the end of the year as coronavirus vaccines are rolled out and the boost from easing virus containment measures persists, although the recovery has shown some signs of stalling recently since GDP reached pre-pandemic levels. While today's data releases hold minimal market-moving potential, they will be interesting insofar as help investors gauge the extent to which BanRep will be able to normalize monetary policy going forward.

Chile: With 94% of the ballots counted at the time of writing it certainly looks like Chile will be headed for a presidential run off. The conservative presidential candidate Jose Antonio Kast has 28% of the vote while his leftist rival Gabriel Boric has 26% of the vote. This sets the stage for Chileans returning to the polls on the 19th December 2021 for the second round of votes.

The fact of the matter is that all traditional parties have lost relevance with smaller parties coming to the fore but not yet substantial enough to form credible oppositions or leaders. This is not just a localized issue, COVID-19 has caused a rise of nationalism in some parts of the world, while the left has gained in others. There is a strong protectionist movement across the globe, and we have not yet seen the end of political upheavals as the gap between rich and poor continues to extend at a rapid rate.

Peru: Prime Minister Vasquez sparked some controversy with mining firms over the weekend, suggesting that four mines in the Andean Ayacucho region would not be allowed to extend their operational timelines. Under local law, all mines have an expected closure date, although they can be extended if regulators allow it. Vasquez said on Friday that the government will be looking to facilitate the shutdown of these mines "as soon as possible." The move is clearly aimed at gathering support from the communities that have been protesting against the mines in recent months. The mining firms, unsurprisingly, have reacted very negatively to the comments, saying that the government gives in too easily to protestors and is awarding violence and aggression. We wait to see if the administration backtracks on these comments, with PM Vasquez attempting to do so yesterday. However, some damage has already been done other firms will remain wary of investing in the sector as a result.

Forex: All eyes on CLP after this weekend’s elections

Brazil: The BRL extended its losing streak to a fifth consecutive session on Friday as the USD continued to steam ahead and as global risk appetite soured further amid concerns over the financial turmoil in Turkey and renewed lockdowns in Europe. The recent bout of lockdowns has triggered concerns that the latest wave of COVID-19 could derail the global economic recovery. Unsurprisingly given all the uncertainty in Brazil and the country’s relatively weak macroeconomic fundamentals, the BRL ended the session amongst the worst-performing EM currencies on Friday, losing -0.79 against the USD to close the week out at 5.6102. Looking at the session ahead, the USD has extended its gains this morning, and EM currencies, for the most part, are on the back foot, pointing to another tough session ahead for the BRL.

Mexico: The USD-MXN continued its upward trajectory at the end of last week to close at 20.8302, its highest level in six weeks to print its second consecutive week of gains. The move higher was underpinned by a stronger US dollar amid prospects of the US Federal Reserve accelerating the process of normalising its monetary measures and also due to caution resulting from a new wave of Covid-19 infections across Europe. Last week was a good week for the USD and this week appears to be starting much as it left off. This is keeping the USD-MXN trading firmly on the front foot, and we could see it rally towards this month's high of 21.000. Upcoming local catalysts such as bi-weekly inflation and meeting minutes will influence the spot this week, even more so with thinned out liquidity levels with the Thanksgiving holiday in the US.

The one-month USD-MXN implied volatility benchmark has climbed to 12.90%, ahead of the US Open, which sits narrowly below its June high of 12.97%. The next major level will be the 14% mark.

Colombia: After another unsuccessful attempt at breaking the 3950.00/$ mark on Friday, the bears retreated into the weekend with the COP closing the session some 0.25% in the green. It appears 3950.00/$ is the line in the sand for now, with the COP's November selloff looking very stretched at these levels. However, much depends on broader USD moves at present, with this being driven by speculation on prospective Fed monetary policy making and the ebb and flow of market risk appetite.

Chile: The CLP managed to claw back some of the losses recorded on Thursday into the close of the week however the currency certainly remained vulnerable given the event risk over the weekend. Therefore we may see additional pressure come through at the open given the uncertain outcome of the presidential election. The first major resistance level comes in at 838.25 following which is the year to date high at 841.25. The first support level is at 825. 38 and then 820.00.

Peru: The USD-PEN dipped on Friday as higher copper prices and central bank FX management supported the local unit. The pair remains above the 4.000 handle, however, and will unlikely sustain a break below this level until foreign interest in the local markets picks up again. The PEN may come under some pressure at the open given the increased uncertainty surrounding the mining sector now.

Brazil: Brazilian bond yields traded lower on Friday. The most notable moves were on the front-end of the curve, with the likes of the 2yr yield falling 14bps to 12.11%. The sharp drop in yields on the front-end came on the back of a sustained decline in international oil prices, which helped ease inflation fears. Note that soaring fuel prices have been one of the main drivers of inflation in recent months.

Mexico: The Mexican bonds traded lightly in the final session of the week, with some yields nudging slightly higher and others remaining unchanged on the session. Over the week, Mexican bonds mainly consolidated, trading within a range seen at the start of the month and more broadly from the back-end of September. While there has been a lack of market triggers of late and investors breathing a sigh of relief with the bond market rout subsiding, several risk events remain for the local bond market. This ranges from the upcoming domestic macroeconomic data releases, rising infections that risks undermining economic growth and pushing back rate hike bets, the government's energy rhetoric. Lastly, developments abroad, one in particular, the announcement of who will chair the US Federal Reserve, which has implications for broader financial markets. All of which suggests that Mexican bonds are likely to come under pressure in the coming sessions.

Colombia: The Colombian yield curve bear steepened on Friday as long-end tenors saw greater yield increases than their front-end counterparts. More of the same is expected at the early stages of the new week, with the market's focus currently fixed on the recent announcement of more hard lockdowns in Europe and the impact these will have on global economic growth. Accordingly, today's local data releases are likely to be shrugged off by the market, with global dynamics currently trumping local economic developments.

Chile: The trend is your friend at the moment, with higher yields the order of the day across the yield curve. The 2030 bond finished the week on the back foot through the 6% mark at 6.06%, while the near dated 2023 finished some 12 bpts higher at 5.72% versus the previous close. Plenty of event risk should keep bonds offered at the start of the week given the fact that there is no clear cut winner in terms of the presidential race, and we now have to wait until December to see what the outcome of the runoff will be.

Peru: A very quiet session for Peruvian bonds on Friday with moves through to the 20yr sector coming in at less than 1bp according to Bloomberg data. Bonds may come under some pressure at the open today given the risk-off trading conditions globally and after the news from the weekend regarding the push for closure of certain mines by the PM. The relatively strong GDP numbers out on Saturday will unlikely have much of an impact on the market today, but they do suggest that economic activity is recovering well which will play into the hands of the central bank hawks. 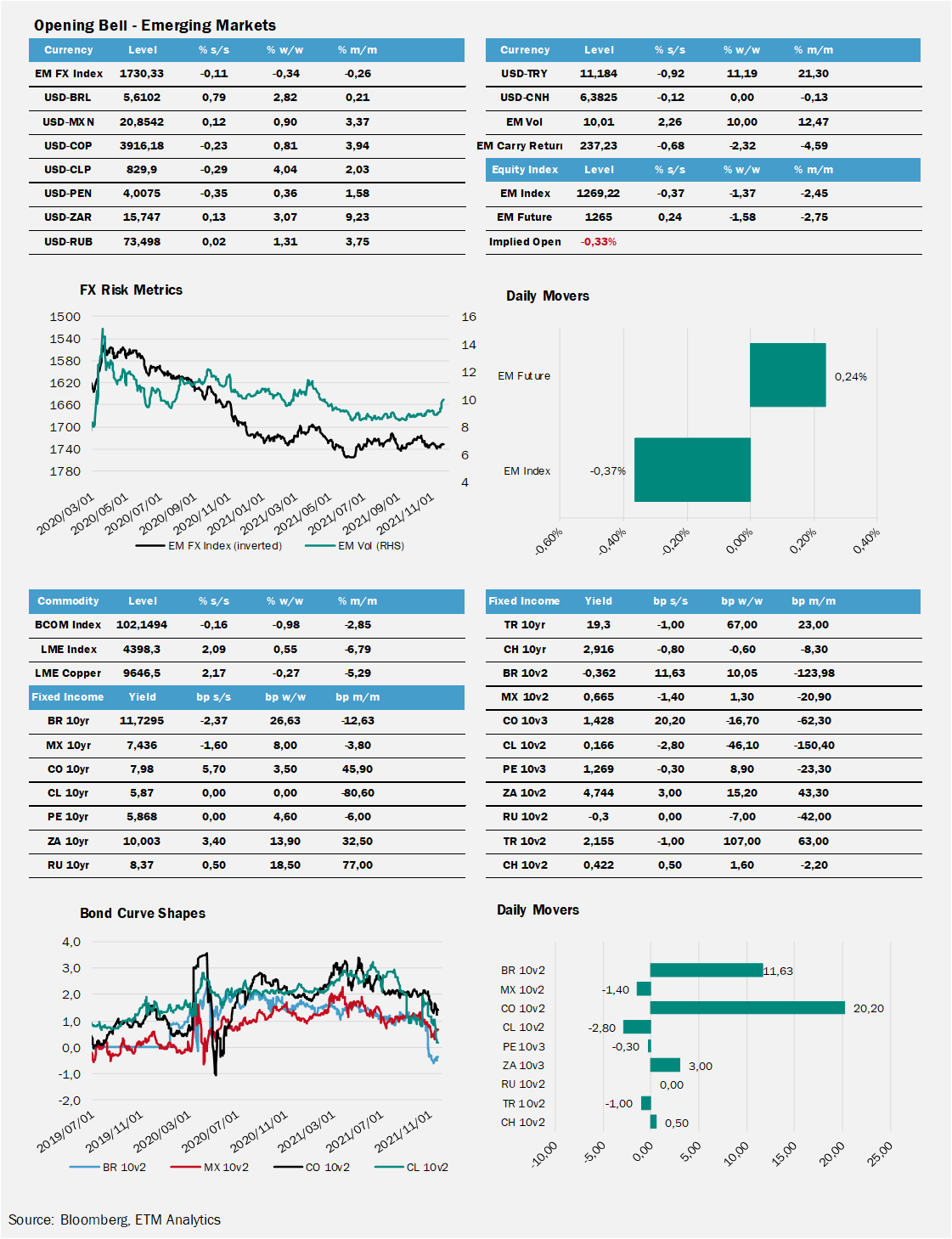 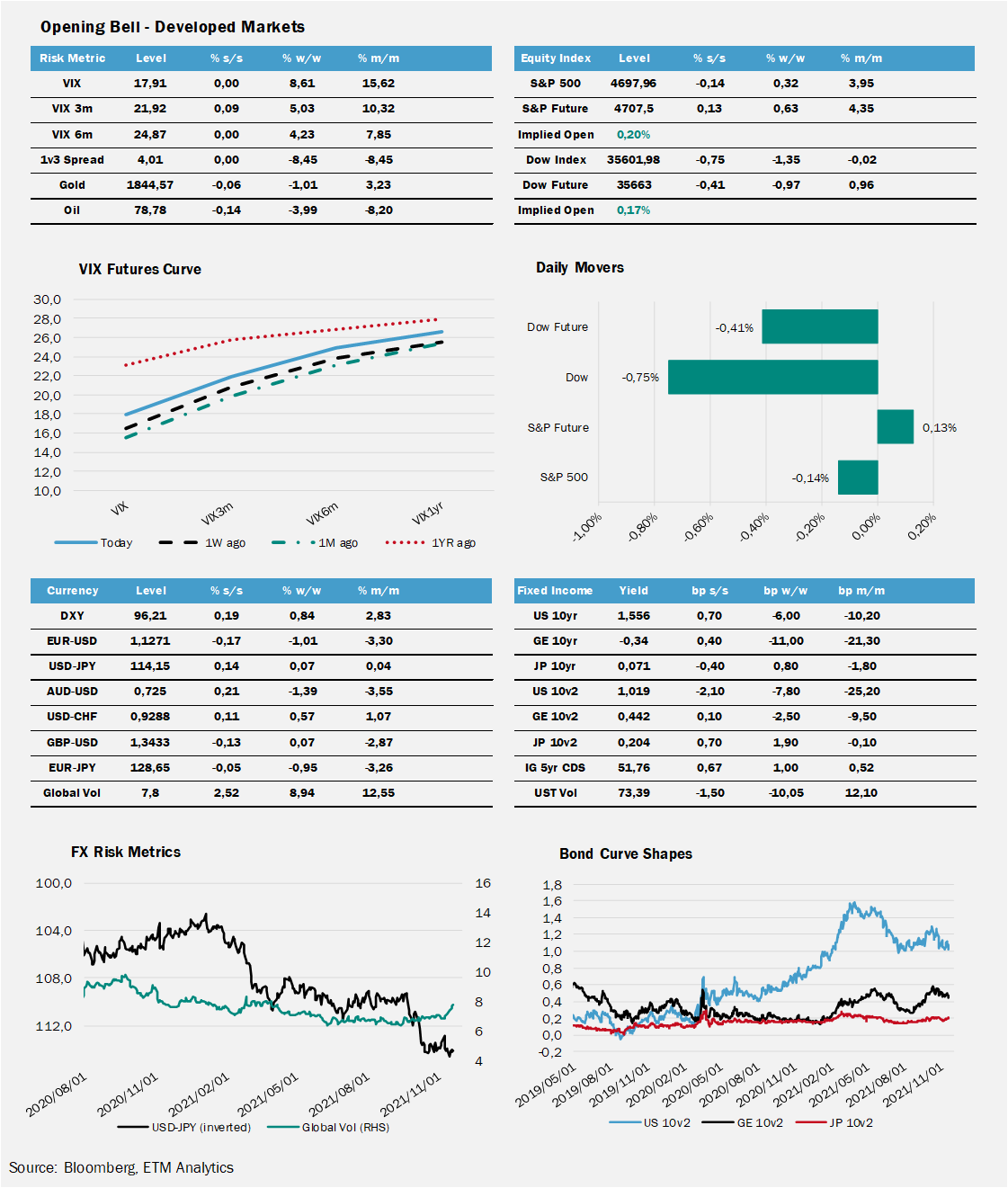