Talking Points: Idiosyncrasies in focus but market looking at US data

Brazil: The second-tier inflation data released yesterday, namely the FGV CPI IPC-S reading for 22 Nov came in higher than market expectations, printing 0.96% versus a market expectation of 0.84% and a prior reading of 0.85%. Although the reading was second-tier in nature, the sensitivity of markets to any talk of inflation would have kept traders glued to their screens.

On the news front, the Precatorios Bill will be heading to the Senate floor following a viewing by the Senate Committee. There is a sense of urgency to get this bill passed which stems from the need to create fiscal space for the Auxilio Brasil programme, according to Rodrigo Pacheco, the head of the Senate who was quoted at a press conference in Brasilia.

Mexico: Retail activity in Mexico rose slightly to 0.2% m/m in September after recording zero growth in the month before but missed market expectations for an increase of 0.8% m/m. The sluggish improvement in retail sales suggests that demand dynamics remain weak and that Mexican households may have already utilised their pent-up savings as early as May. Now that consumers are feeling the pinch of increased prices and cost of living, their appetite to spend is diminishing. It is unclear what portion of the remittances are being used on consumption, but the retail sector would be considerably worse off in its absence. On a y/y basis, retail sales rose by 5.9% in September, moderating from 7.2% in the month prior.

In other major news yesterday, the leadership of Mexico’s central bank was thrown into confusion after President Lopez Obrador decided to withdraw the nomination of former Finance Minister Arturo Herrera. The former FinMin was set to succeed Banxico’s Governor Alejandro Diaz de Leon, whose term concludes at the end of 2021. According to Ricardo Monreal, the Senate leader of Obrador's leftist National Regeneration Movement (MORENA), said the president's decision to pull the nomination was made in August and that Herrera might still be a candidate for the bank's top job. No reasons were given for the announcement, but Arturo Herrera now appears unlikely to ascend to the position. The unexpected turn of events over the central bank succession could rattle investors wary of the politicisation of the monetary authority. It is worth pointing out that Obrador has appointed three of the central bank's current five board members in Mexico’s traditionally autonomous central bank. That said, investors will be watching closely who the new candidate will be.

Colombia: During a visit to Colombia to commemorate the fifth anniversary of the signing of the peace agreement between the Colombian government and the Revolutionary Armed Forces of Colombia (FARC), UN Secretary-General Antonio Guterres celebrated the advances made to implement the peace deal but said more effort is needed to sustain economic opportunities for ex-combatants. The accord has been beset with challenges since being signed in 2016, with several former commanders returning to arms as they maintain the deal was not being fulfilled. Note that US President Joe Biden's administration reportedly also plans to remove FARC from the US list of foreign terrorist organizations, which will show support for the controversial peace deal.

Chile: The IMF announced that it had completed a virtual staff visit to Chile on the 19th November and released its preliminary findings on the country yesterday. The general consensus is that the Chilean economy is recovering very fast from the Covid-19 pandemic, thanks to the authorities’ successful vaccination campaign and their substantial policy response. Quoted off the IMF website - “The authorities’ economic policy response comprised a wide-range of monetary, financial, and fiscal measures that helped mitigate the fallout of the Covid-19 shock. In light of strong growth and the rise of inflationary pressures, the removal of macroeconomic stimulus being implemented by the authorities is appropriate and should be accompanied by targeted support to the most vulnerable.” “The IMF team thanks the authorities for the engaging discussions and very much looks forward to continuing the cooperation with Chile in the period ahead.”

Peru: According to CRU Group, the shutdown of the mines mentioned by the Prime Minister over the weekend would impact around 10% of Peru's silver output, with three of them accounting for 15.1mn ounces of the metal a year. The group also supported the notion that the situation exacerbates the risk perception regarding Peru's mining sector, and that although only four mines are currently being targeted, the arbitrariness of the announcement means that others could be targeted.

Meanwhile, Moody's Investors Service Vice-President Jaime Reusche has said that Peru's economic reactivation will be driven by exports, as global demand dynamics will lead to greater investment and an improvement in local business confidence levels. With this point, uncertainty surrounding the country's mines remains in focus and Peru risks losing out on substantial investment if it cannot provide legal and political stability for firms looking to increase their presence in the market. A positive, however, is the fact that agri-exports have been improving so drastically in recent times. Non-traditional exports out of Peru are now growing compared to 2019 levels, which may help this sector contribute to job growth as it is less capital intensive than mining.

Brazil: The USD-BRL kicked off yesterday on the front foot as EMs remained under pressure from the TRY sell-off and the hawkish repricing within US markets. The pair closed the day just below the 5.6000 mark, and although this was off the day's highs, it keeps the bullish trend intact for now. The next major resistance level to keep an eye on will be 5.7500, with the market likely to be tetchy today given the deluge of US data ahead of the Thanksgiving holiday period, which will see market activity dry up from tomorrow and into the weekend.

Mexico: In Latin America yesterday, the MXN led losses in the region, tumbling almost 1.4% against the USD. The local currency settled at 21.2232/USD after weakening to 21.3088/USD during intraday and remains on course to test its YTD low of 21.6357/USD. The MXN remains heavily influenced by external developments, with emerging market sentiment taking a knock following a 15% plunge in the Turkish lira amid President Erdogan’s push for rate cuts. In addition, the market also reacted strongly to the central bank debacle, which will detract from the MXN’s resilience to external headwinds.

Colombia: The COP reversed the previous two sessions' gains with a 1.40% decline yesterday, as it led regional currencies lower despite rising oil prices through the session. It closed just below the 3950.00/$ mark, once again unable to sustain breaks above that level. Accordingly, this remains the line in the sand that the bears will be targeting, although a fresh catalyst may be needed for the currency's selloff of late to reignite.

Chile: The USD-CLP opened around 813 yesterday and closed almost unchanged at 812.63. The exuberance following the Kast victory in the first stage of the Presidential election seems to be fading somewhat and we are now anchored above the 806.29 50DMA. Copper is on the backfoot this morning and the dollar remains underpinned which suggests that the local unit will have a cautious start to the day.

Peru: The USD-PEN touched an intraday low of 3.9636 yesterday, with the gains for the local unit likely driven by some position-squaring ahead of the US holiday, as well as some reduced uncertainty surrounding the mining situation following President Castillo's recent comments on the matter. These gains for the PEN were quickly retraced, however, as global trade conditions remained risk-off. The pair closed at 4.01, keeping the 4.00 handle support level intact ahead of what could be a volatile session today.

Brazil: Brazil's yield curve remains inverted with longer-dated yields sliding yesterday to further entrench this. The inflation data out yesterday, although second-tier, kept the front-end anchored as more rate hikes are still to come, which will crimp growth and inflation further down the line. Given that there have been no signs that inflation pressures are easing in the economy, we expect this inversion to persist as the balance of risks favours a further weakening of front-end bonds.

Yesterday's auction saw BRL1mn worth of 2028, 300k worth of 2024, and 150k worth of 2040 NTN-B bonds sold. The stronger demand for shorter-dated linkers was unsurprising given the current inflation risks present in the economy, and the expectation that more rate hikes will quell these pressures further down the line, albeit at the expense of economic growth. This theme may persist through the next few linker auctions, with these bonds likely to outperform their vanilla counterparts.

Mexico: Mexican bonds sold off yesterday, impacted by the US benchmark Treasury yield rising to a four-week high of 1.68%, a weak MXN and traders responding to the uncertainty concerning the central bank's leadership at a time when inflation is approaching a two-decade high. The above factors will continue to hurt investors' appetite for Mexican bonds that are already under pressure from slowing growth, high inflation, and the government's reformative policies. Movement along the yield curve yesterday was irregular, with yields rising between 12bps – 15bps. Mexican bonds are expected to remain under pressure in the short term and continue to move in lockstep with the US 10yr bond yield.

Colombia: Colombian bonds remained under pressure on Tuesday, with yields rising across the curve through the session. Moves were more pronounced at the long end, leading to a bear-steepening thereof on the day. For scale, the 15-year tenor led the charge, with hits yield rising by nearly 17bps according to Bloomberg data. The weak demand on the day was primarily due to offshore developments, which remain risk bearish as investors position for a faster normalization of global financing conditions in the months ahead. This will continue to drive trade in the session ahead, especially with fresh directional cues likely to come from the slew of US data scheduled for release today.

Chile: The bond market has settled down post the strong receiving interest earlier in the week. The 2023 closed the day yesterday at 5.45% after closing at 5.43% on Monday while the longer-dated 2030 finished at 5.63% after finishing the Monday session at 5.54%. The marginal rebound in rates was to be expected following the hard rally on Monday and we expect that there may be additional position squaring coming through as the market buckles down ahead of the US Thanksgiving period. Liquidity is certainly likely to be lower than normal.

Peru: Peruvian bonds remained under some pressure yesterday, with yields rising across the curve from the 5yr sector onwards, according to Bloomberg data. This was largely a result of offshore conditions, which continue to see global bonds selling off as the market prices in faster normalization from central banks, especially the Fed. For the day ahead, we could see some volatility in the markets as mentioned above, given the US data that is coming out ahead of the Thanksgiving holiday. 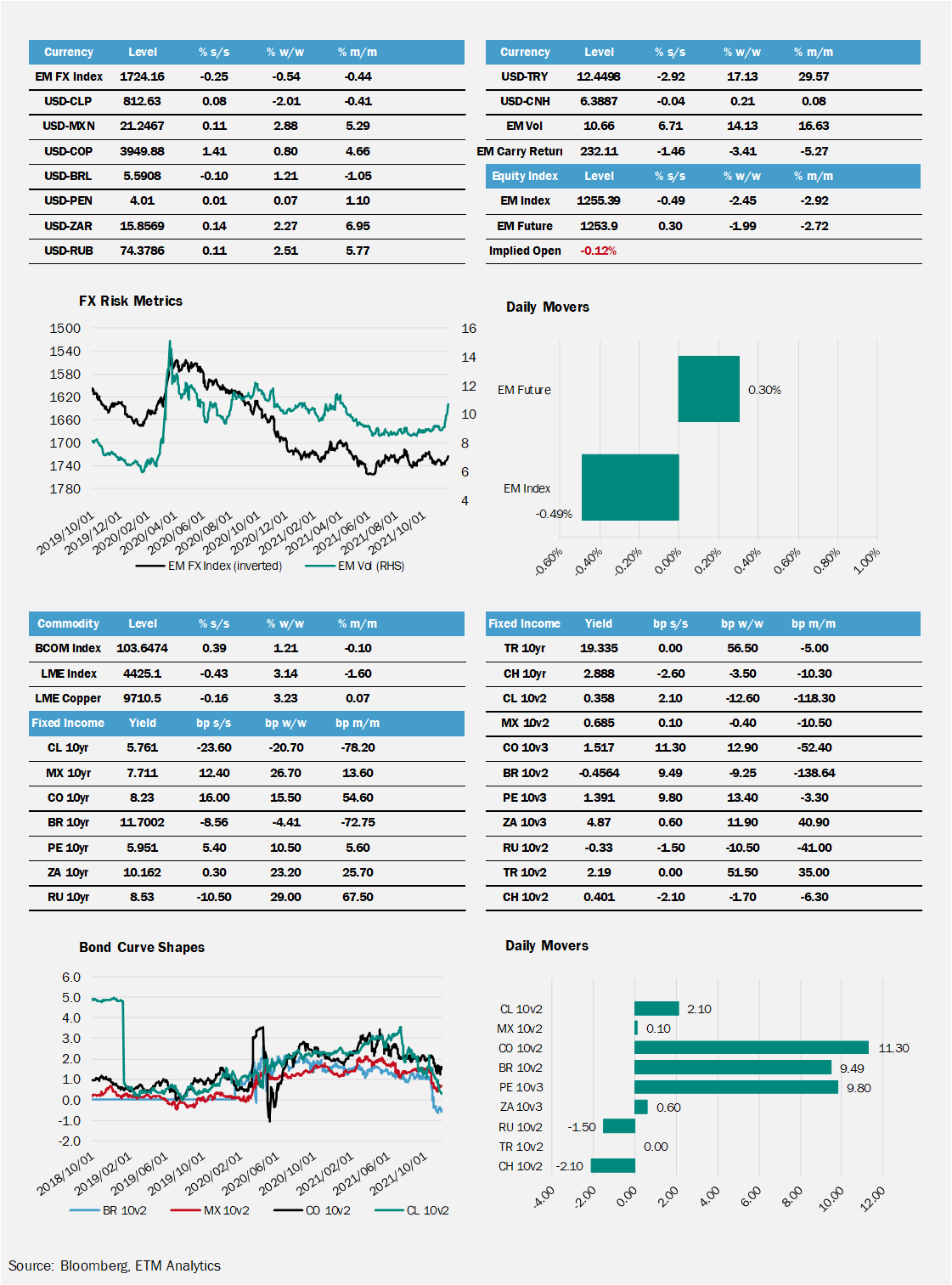 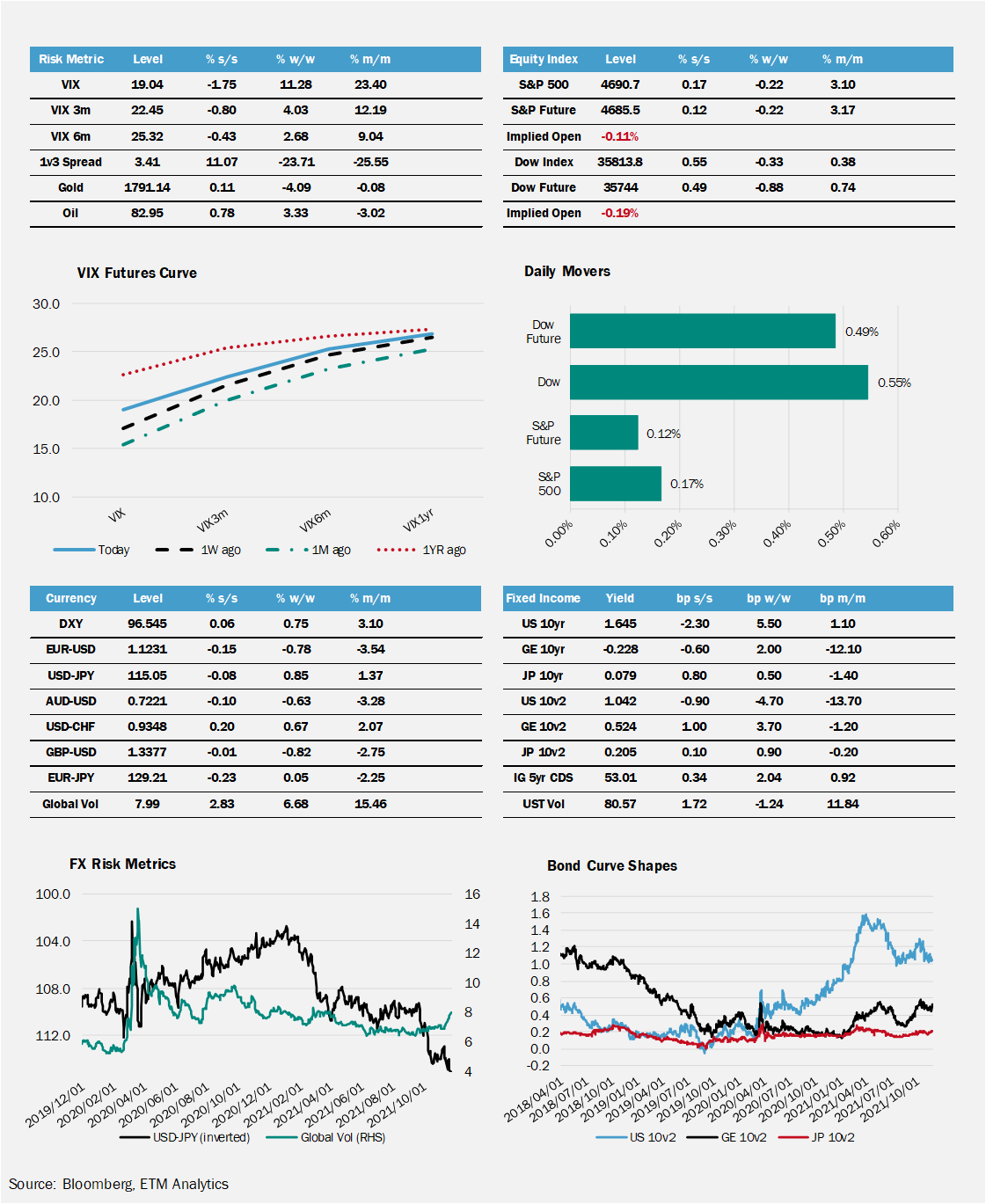