Global recession headwinds remain manageable… 2022 growth-inflation trade-off improved relative to our 5 September expectations (see Macro and Strategy Update: To the tune of global factors), with higher growth and lower inflation. Throughout 2022 several governments pursued active supply-side policies to protect vulnerable populations from soaring inflation, thus retaining an expansive fiscal policy bias. In turn, the recent moderation of commodity prices was instrumental in keeping current account deficits at bay, particularly for net commodity importers in Central America and the Caribbean (CAC). In 2023, slower global activity and more stringent international liquidity will eat into Latin America’s growth prospects, but the impact will be far from dramatic due to: i) strong domestic buffers, ii) moderate FX debt maturities, iii) frontloaded rate hikes in the past two years. Twin deficits in 2023 will remain on the high end of pre-pandemic trends (Chart 1), and this certainly creates downward risks, especially if there is a renewed oil crisis. However, we think that these will remain manageable even in an adverse scenario due to the aforementioned factors and higher FX flexibility. Still-elevated CPI expectations (Chart 2), combined with the widespread belief that Fed tightening will continue into 1Q23 and that rate cuts would only start in 4Q23 will likely constrain regional policymakers’ ability to ease monetary conditions. 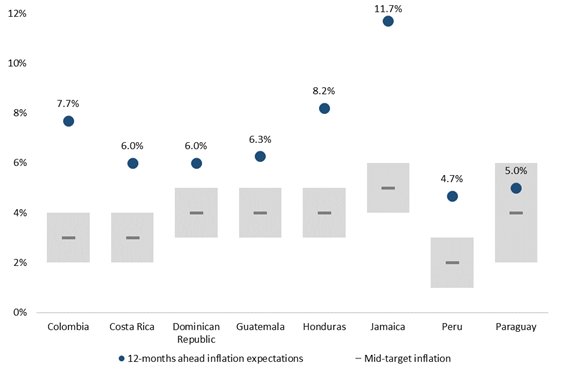 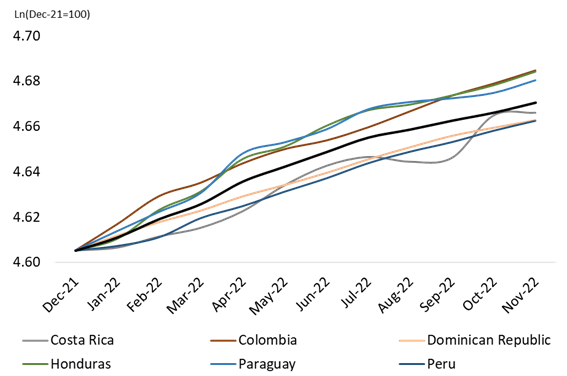 Hence, we only see regional central banks starting to lower borrowing costs timidly in 4Q23 so there is a non-negligible probability that regional growth disappoints relative to our forecasts. In an extremely adverse backdrop, we see countries where low credibility is crippling policy space (Argentina, Ecuador, El Salvador, Panama and Honduras) implementing a major procyclical adjustment. However, except for Argentina, The Bahamas, and to a lower extent El Salvador, a balance of payments crisis in 2023 remains a tail event, in our view. General elections will be held in Paraguay (April), Guatemala (June) and Argentina (October), but only in the latter case we see politics posing a threat to financial stability. Peruvian caretaking president Dina Boluarte announced that anticipated presidential elections will take place in April 2024, but mounting tensions and violence following the demise of former president Pedro Castillo might force an earlier ballot.

… But unsupportive politics could curb much-needed fiscal consolidation. For 2024, we see inflation hitting the mid-point of targeted CPI bands and growth at potential levels with the resumption of neutral monetary policy stances. Fiscal accounts will also improve, but, in light of higher indebtedness and more sluggish remittances, sustaining healthy debt metrics might command deepening fiscal discipline. An increase in domestic savings should help foster investment and productivity growth, while cementing the convergence of current account balances to pre-pandemic levels. This will be particularly critical for CAC countries that are currently facing a historical opportunity based on nearshoring and the US seeking to relocate production processes away from China. On the other hand, politics represent a risk to this view, inasmuch as general elections in El Salvador (February), Panama (May), Venezuela (December), and Ecuador (January 2025) lead to a ramp-up in public spending.

We see limited incremental appetite for risk at the outset of 2023. EM spreads are currently hovering around 380bps, above the 360bps value we had assumed for our global recession scenario (see To the tune of global factors). Higher demand for risk, as incoming economic data fuelled the “Fed pivot” narrative, boosted the returns of our model portfolio. By 13 December, our model portfolio had gained 9.8% versus 2 September, overperforming the benchmark -based on the weights assigned by the EMBIG to the bonds issued by the countries we track- by 3.3ppts. To a large extent, this result was driven by a more aggressive allocation to Salvadoran and Ecuadoran notes. Relative spreads of Salvadoran and Ecuadoran bonds narrowed 344bps and 207bps since 31 August to 1,535bps and 922bps, compared to our target of 1,600bps and 900bps, respectively. Instead, the relative spreads of low-beta names rose below our expectations, while Dominican Republic and Paraguay registered mild downticks. On the other hand, and contrary to our view, the downward slope of the US Treasuries yield curve became more pronounced. In line with the market’s consensus, we have now transferred our assumption of a flattish yield curve to end-2023, as the Fed and other central banks in DCs cool down demand and gain credibility (Chart 4). Already chronic geopolitical tensions, faltering global growth, sticky inflation and high international rates could hold back further spread compression. Thus, we pencil in a trading range for the EMBIG of 360-370bps by end-1Q23, with the relative risk of LatAm consolidating at 35-45bps above the EMBIG, slightly below its pre-war levels. 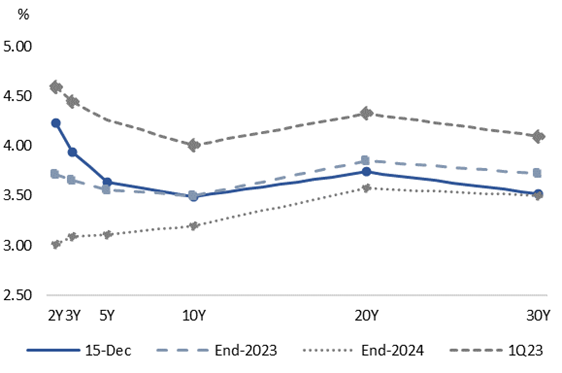 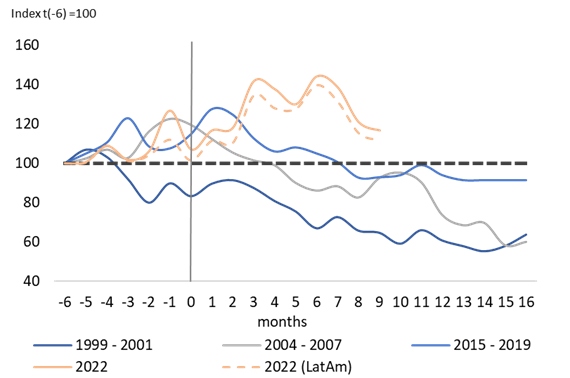 We shorten the duration of our model portfolio but stick to our idiosyncratic convictions (El Salvador and Ecuador). Our 1Q23 model portfolio acknowledges these sources of lingering risks even if the pivot narrative is gaining momentum. In the absence of triggers that would stimulate demand for risky assets further, we moderate the duration of our portfolio relative to the benchmark to generate a more balanced risk-reward. On the other hand, we increase exposure to those credits where we have a conviction. In this regard, we continue to favour El Salvador, and to a lesser extent, Ecuador. In El Salvador we see relative spreads narrowing an additional 135bps following the payment of the 23s next January (Table 2). Ecuadoran spreads should post a more modest 23bps reduction versus the EMBIG as the government will need to stick to a strict fiscal discipline to bridge the financing gap. Conversely, we go underweight in those names where political fragmentation and/or weak administrations are denting fundamentals, setting the foundations for a future de-rating (i.e. Panama, Peru and Honduras). In a context of spread stability, the short end of the Argentina curve (29s and 30s) should deliver handsome returns, but the large FX gap, low international reserves and the proximity of elections make us wary of going overweight until a clear catalyst emerges. Under our set of assumptions, we look to our model portfolio yielding a cumulative 1% until 31 March 2023, compared to -1% for the benchmark (Table A.1). For those investors who are more upbeat on the pace at which the US yield curve can flatten below the 4% threshold we devise a more aggressive portfolio. The rationale for a more aggressive allocation is that faster convergence of US yields can spur risk appetite, causing spreads to drop below our target. This portfolio extends duration, increases the weights of high-beta credits (Argentina, El Salvador and Ecuador) and lowers exposure to BBB and BB countries. The expected return of the aggressive portfolio under our current assumptions for US Treasury yields and spreads would slightly overperform our baseline (see Table A.2), but at the expense of adding much more risk. EXD bonded debt supply should remain limited in 1Q23 as we only see Costa Rica and Dominican Republic tapping the international market for USD2.5bn (Table 3), while most debt placements and LMOs would be concentrated in 4Q23 as the Fed introduces its first 25bps rate cut.

Amnesty is the silver lining for a political solution in Venezuela. The US government allowed for a mild relaxation of oil sanctions as negotiations between the opposition and Chavismo resumed in Mexico. However, recent polls suggest that there is a real chance that a united opposition candidate could defeat Chavismo in unrigged elections. Hence, we look to Maduro limiting political concessions granted in Mexico and stepping up efforts to disperse the opposition vote. In turn, this could bring to a standstill the recent recovery of Sovereign and PdVSA bond prices. The opposition primaries –that we have pencilled in for June 2023– will be the litmus test for reasonably smooth elections in 2024. The amnesty and transitional justice discussions –in line with the proposal of Colombia’s president Gustavo Petro– remains the silver lining for a political solution, in our view. We reiterate our long-held view that Venezuelan bonds will trade closer to our estimated recovery range of 20 to 35 cents on the dollar once there are convincing signs that the legitimacy of the next administration will not be contested by the international community. 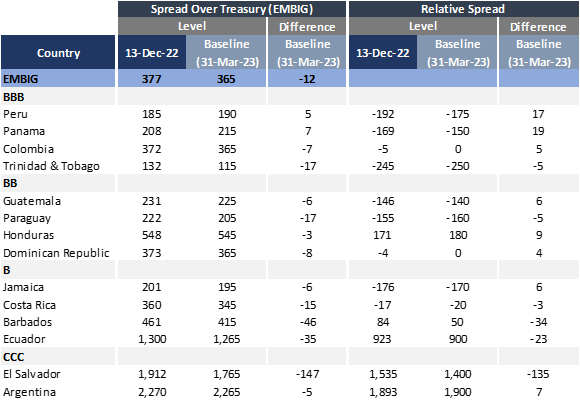 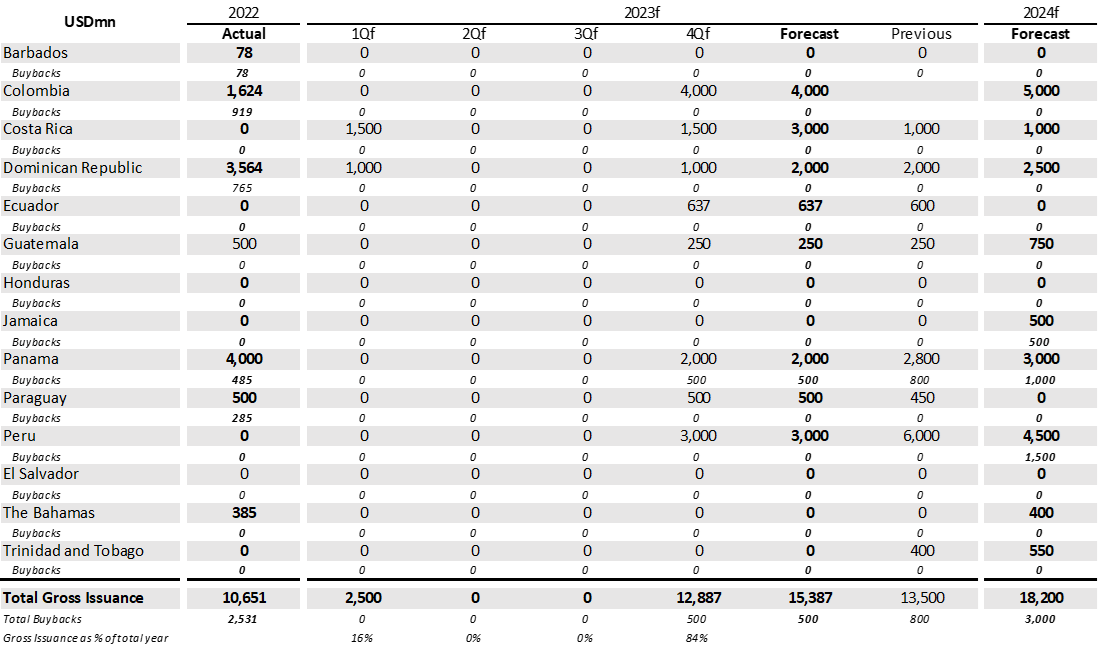 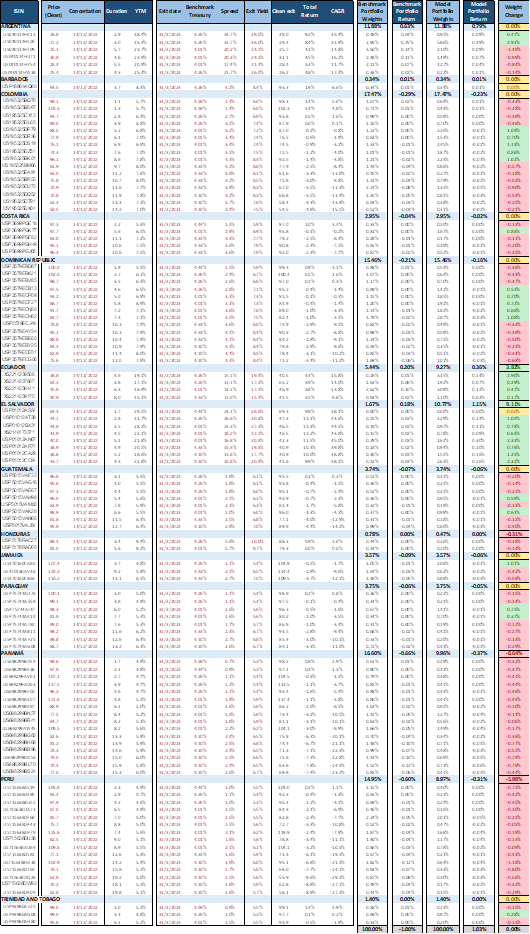 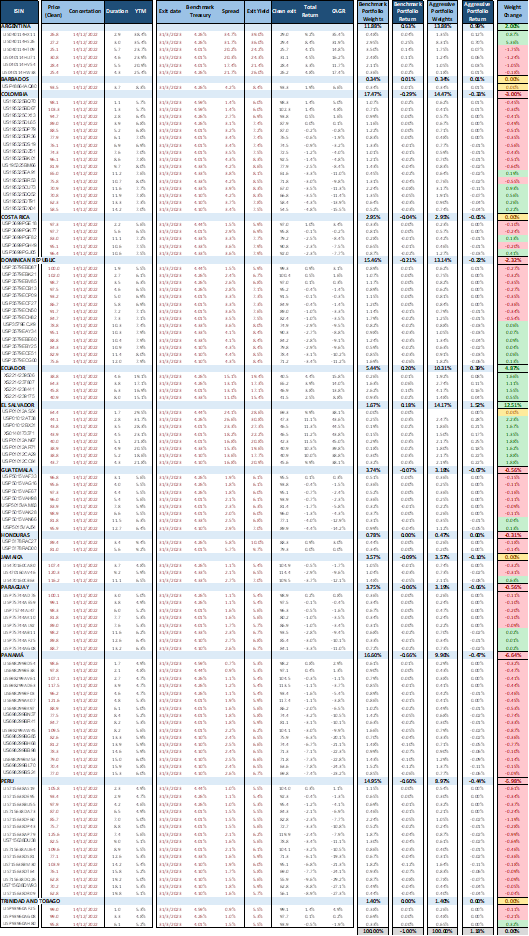 Chart A.1. Relative Spreads (vs. EMBIG) of BBB credit 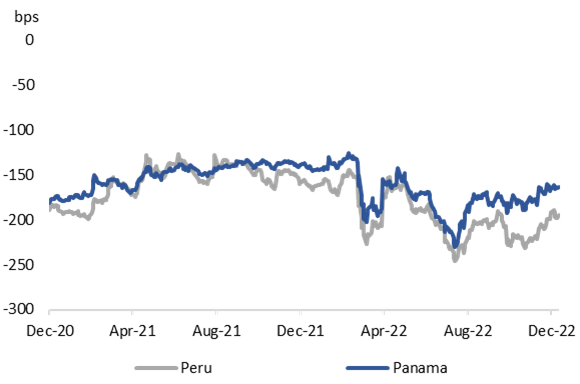 Chart A.2. Relative Spreads (vs. EMBIG) of BB credits 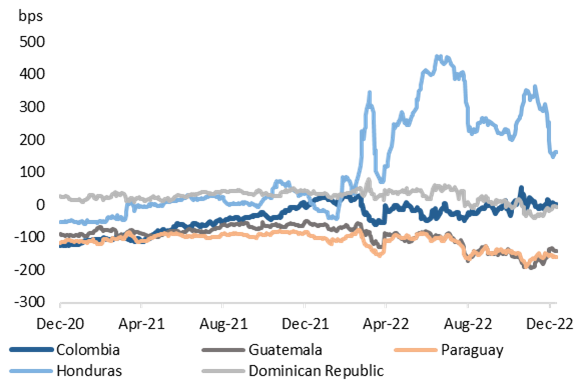 Chart A.3. Relative Spreads (vs. EMBIG) of B credits 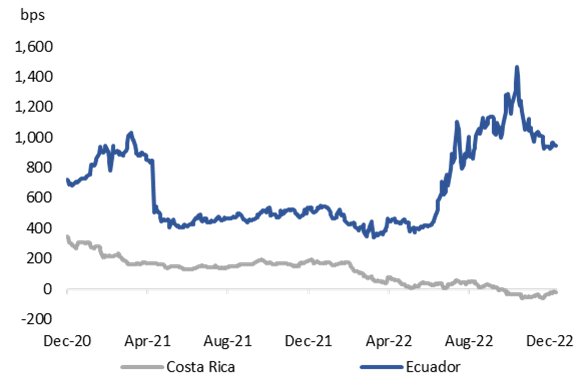 Chart A.4. Relative Spreads (vs. EMBIG) of CCC credits 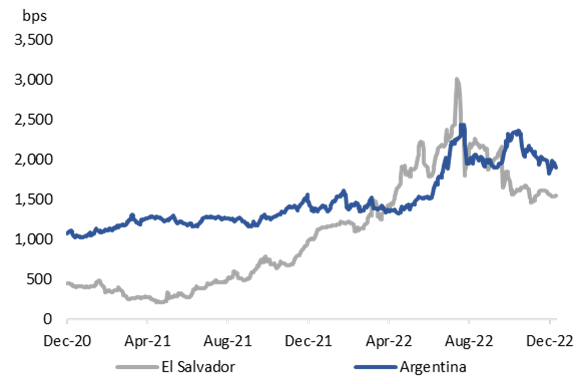