Amid this month's drop in the US dollar (down 2.6%) and oil price (down 10%), there has been a small reversal in performance seen year to date in EM.

This is best exemplified by the bounce in China (up 19%) and Taiwan (up 21%) versus the drops in Brazil and Saudi Arabia (both down 8%). 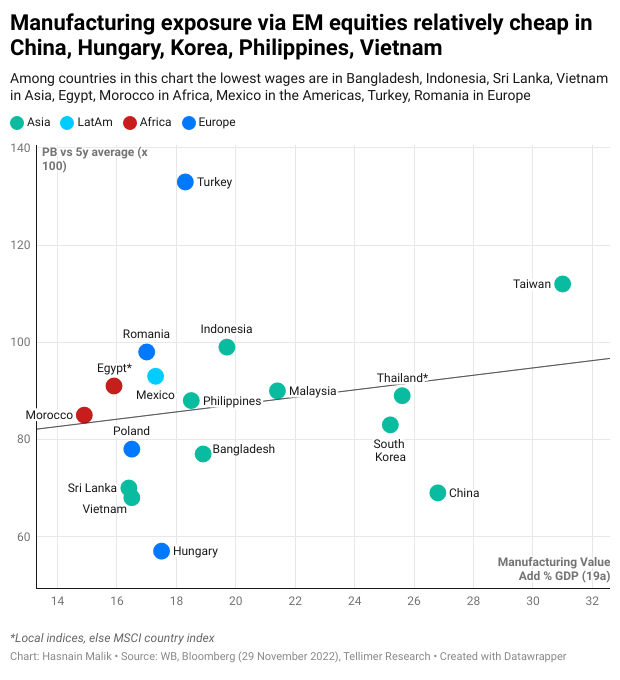 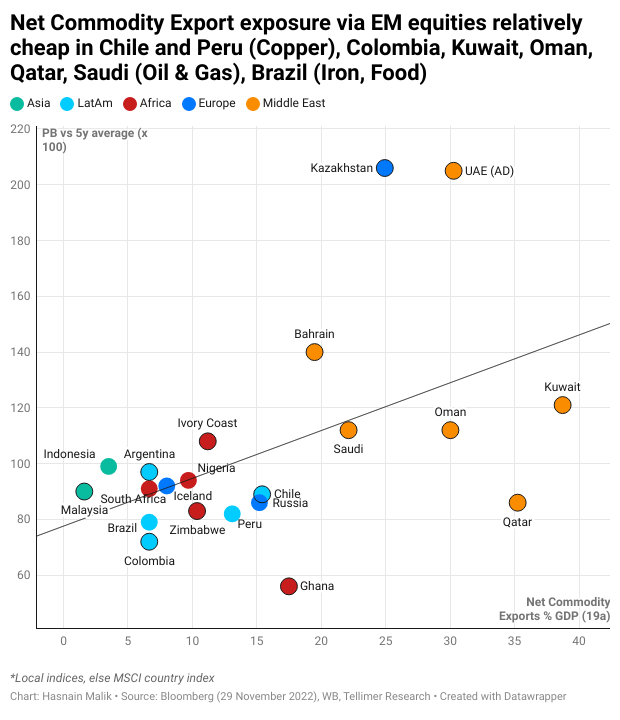 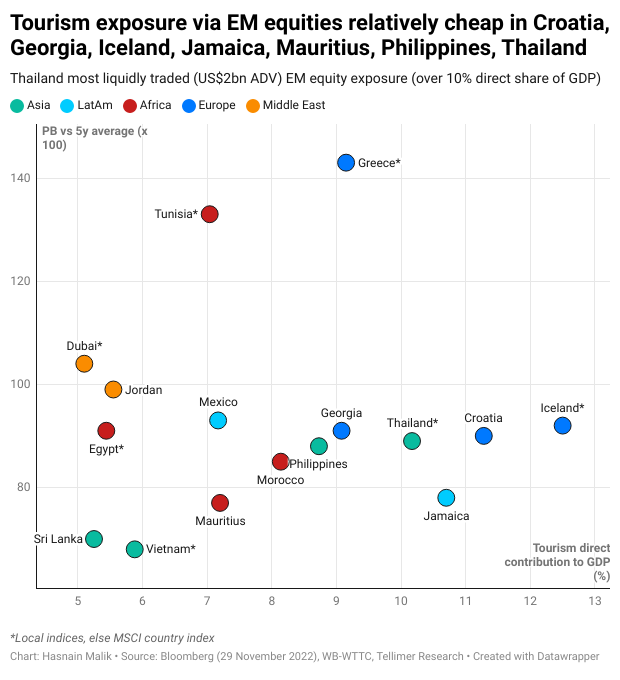 A range of factors, while remaining unhelpful in the near term and contributing to a stuttering and uneven growth environment, are losing their capacity to shock:

Already reflected in the valuation of EM

These factors already may be reflected in valuation with most of the EM equity, and associated currency, universe cheap.

Valuations across EM and FM appear to reflect a degree of stress, with respective price/book discounts of 10% and 15% relative to five-year medians, compared with the US S&P, which is on a 15% premium. And most individual EM countries are cheap relative to their own history.

The overall asset class is cheap relative to the US – where not only does the valuation of equities and currency look high relative to the historical average but there are also fundamental concerns on polarised politics and productivity.

Multiple investment themes (one will not consistently lead)

Parts of EM offer exposure to one or more of five investment themes.

Some of these themes appear contradictory but that is intentional in an environment of stuttering, uneven growth, when one type of exposure will not consistently lead global equity markets.

Structural reform (self-help) is a slow and stop-start process but a powerful driver of the long-term investment case in emerging markets. It is sorely lacking at the moment, having not, in general, revived following the buffeting from the crises of Covid, high commodity prices and US dollar strength – Dubai and, to a degree, Indonesia, are exceptions.

However, the largest EM equity markets are not of the type traditionally associated with sovereign vulnerability at a time of global stress. China, India, Korea and Taiwan in EM, are not immune from currency depreciation in such a strong US dollar environment but they do not have vulnerable external accounts in the manner of Mexico and others in LatAm, or Russia, a generation earlier. The same could be said of Vietnam, Morocco, Iceland and Kazakhstan – the largest components of FM.

And instances of equity market distortions and inefficiencies are rare; eg floor price regulation in Bangladesh or the dominance of related-party, listed companies in Abu Dhabi.

Off-radar markets the exceptions, not the rule

There is sufficient opportunity at appealing valuations elsewhere in EM to avoid these. And the most appropriate way to access these markets for foreign investors is, for the time being, via their traded eurobonds.

Perhaps, Nigeria, alone in this list, offers the possibility of change should opinion poll leader, Peter Obi, win the February 2023 presidential election and implement even a subset of the economic reforms he has promised.

Sanctions and capital controls, driven by geopolitics as opposed to populism or unorthodox monetary policy, take Iran and Russia completely off the radar.

Abu Dhabi, which is increasingly dominated by related party companies – eg International Holding Company, Alpha Dhabi and Aldar – has become something of a special situation, with the interplay between these companies already more important than, for example, oil prices or regional geopolitics, for trading volume and country index performance.

This does not make Abu Dhabi an off-radar market, particularly in an era of high oil prices and a strong US dollar, but the top-down framework we apply to EM equities may not be that instructive.

This combination of global positives and risks drives an outlook of uneven, stuttering growth across EM and implies there will not be consistent market leadership by one region, country, sector or theme.

Therefore, our top-down strategy is grounded in active country selection over passive index-tracking and exposure to a mix of manufacturing, tourism, commodities, macroeconomic resilience and technology, where this exposure is cheap relative to history.

The main guide for picking countries, for us, is a combination of equity market valuation and liquidity, short- and long-term macroeconomic growth prospects, economic policy credibility and currency risk.

These are all key components of the customisable Tellimer EM Country Index, which also incorporates sanctions exposure, as well as longer-term ESG and climate risk factors.

Our top picks, resulting from our multifactor screen of the EM country equity universe, are both particularly cheap and offer exposure to these themes:

Because trading liquidity is a part of the equity component, and China is much more deeply traded than all other EM, this has a major bearing on China's score.

We try to strike a balance between the short and long term, with a value bias. That is not everyone’s approach, and the EM Country Index can be flexed to reflect different approaches (eg more risk-averse, less valuation-centric).

Contact Tellimer Insights Sales to learn more about accessing the customisable version of our index.

China protests: The start of something big?

US and China jostle in G20, ASEAN, APEC forums

Jeff Bezos the giver: Billionaires, inequality and charity in EM

Pakistan: Imran Khan shot, not fatally, as the revolt continues

Predictions of Putin's demise are overplayed: Precedents from EM

Turkey: Crisis is a matter of 'when' rather than 'if' (Curran)

Colombia central bank not done yet as it hikes again (Culverhouse)

Lebanon is still a gamble (Curran)

Uganda: A positive story for the grim times (Curran)