Kuwait equities have dropped sharply this month, with the local Boursa Kuwait All Share and the MSCI Kuwait indices back to levels not seen since March and May, respectively, of this year. This retraces much of the outperformance versus MSCI FM and EM built up over the last year. Kuwait remains one of our less favoured markets both in the GCC and broader frontier and small emerging. We review recent performance and the fundamental, top-down investment case below.

A sharp drop after substantial outperformance last 12m and ytd

Kuwait equities, measured by MSCI Kuwait, are down 8% so far in September (US$ total return terms), substantially underperforming MSCI EM (up 4%), S&P Pan Arab (down 2%) and MSCI FM (down 3%).

This is a sharp break from the outperformance seen over much of the past year, which was driven by inflows related to FTSE and MSCI index reclassification, value-creating consolidation in the banks sector (KFH-AUB) and hopes for much delayed public project implementation.

More recently, the ill health of the Emir, the announcement of the final merger terms of the KFH-AUB deal ("arriving rather than travelling" as attention now turns to regulatory and execution hurdles), the fall out from the Aramco attack, redemptions among frontier funds and a pullback (finally) from high valuation relative to history are, in our view, the drivers of this correction.

Kuwait in a GCC investment context

Below, we reiterate our view of Kuwait in the context of five top-down themes which cut across the GCC. Overall, we prefer the cheaper value (versus history) available in Dubai or Oman.

(1) Equity index-related inflows – This share price driver remains irresistible but we are now seven months away from the point where index-related inflows should exhaust (assuming the May 2020 accession to MSCI EM) and Kuwait risks joining small EM peers which have little relevance for the average active global emerging market equity fund manager. Kuwait currently accounts for 31.5% of the MSCI FM index. If the reclassification into the MSCI EM index occurs (a confirmed decision is due by end December 2019 for actual inclusion, in one step, in May 2020) then Kuwait should have roughly nine constituent stocks with 50bp aggregate weight (a similar weight to Colombia, Peru and Turkey).

(2) Economic diversification (and duplication) and fiscal trajectory (public project implementation in times of high oil price, or, austerity in times of low oil price) – We are less optimistic than others on the implementation of economic diversification plans (given the structural constraint of a populist, elected Parliament in persistent opposition to an appointed Cabinet, the disincentive resulting from very deep sovereign wealth per capita and the duplication in non-oil activity elsewhere in the region).

(3) Regional insecurity risk – While Kuwait has strained to maintain neutrality on the Qatar blockade (acting as an intermediary) at times and, to a lesser extent, on Iran, the space for this neutrality is compressed by hard-line stances adopted by the UAE (on Qatar) and Saudi (on Iran), and if it proves true that part of the recent Aramco attack involved drones or missiles flying from Iraq over Kuwait airspace, then that would clearly highlight the potential insecurity exposure of Kuwait oil assets too.

(4) Succession – A constitutional process exists for handling succession but it requires approval from Parliament (which is not guaranteed given its fragmentation) and it requires navigating between the two branches of the royal family (Al-Jaber and Al-Salem, where the current Emir and Crown Prince both hail from the Al-Jaber branch). The ages of the Emir (90) and the Crown Prince (82) are advanced and the Emir (although now recovered) has recently endured sufficiently poor health to miss high profile meetings.

In the wider frontier and small emerging universe, we prefer Asia to the GCC. At the country-level, our preference is for the faster growth of Bangladesh and Vietnam, or the cheaper value of Pakistan, rather than Kuwait. 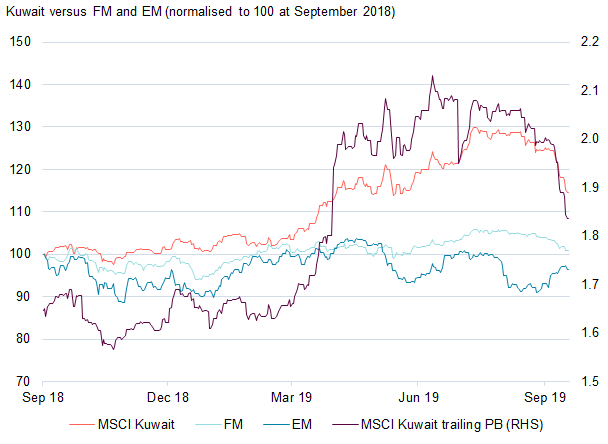