After 15 years in the region, I feel as if I have written this report many times before. There have been so many breakdowns in Kuwait's Parliament that the latest one (the 17th Cabinet since 2006 resigned on 12 January, merely a month into its term) can hardly be described as prompting a crisis or a sense of turmoil, or a catalyst for a change; it is more akin to another punctuation mark in a numbing narrative.

The top-down investment case in Kuwait equities is tepid and likely remains so: growth is low, fiscal deficit is high, valuation is not compelling relative to history or on an absolute basis, and the MSCI EM index-related inflows have run their course (and with merely a 48bp weight in MSCI EM, Kuwait is not big enough to matter for most active EM funds).

In the region, for oil price upside exposure, there is more gearing in Oman or the UAE, and for oil price downside protection, there is cheaper value and fiscal resilience in Qatar.

Kuwait's appointed government has hit an impasse in its relations with the elected members of the parliament it shares. Kuwait has had 17 Cabinets (governments) and 8 elections since 2006. There is little reason to believe that, assuming the Emir accepts the Cabinet resignation of 12 December, the next appointed Cabinet will enjoy more support in Parliament and Kuwait will address its festering fiscal and reform challenges. For example, the IMF forecasts a fiscal deficit of over 10% in 2021, the absence of debt law means that the deficit has to be partly financed by dipping into sovereign cash reserves, the public sector and the welfare system is bloated, and Kuwait falls ever further behind its competitors in non-oil diversification in the GCC.

It is hard to get excited about Kuwait's investment case 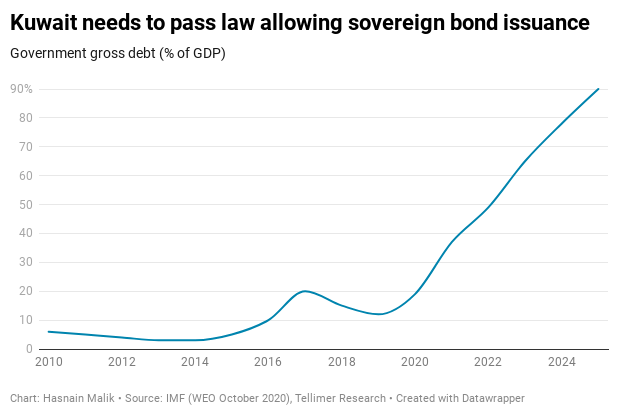 GCC blockade 3 years on: Qatar is best for those who doubt the GCC can diversify (June 2020)