Two weeks ago, we shared our initial assessment of the oil price shock implications for the oil & gas companies operating in the Kurdistan Region of Iraq, in which we identified the businesses better prepared for a prolonged period of low oil prices and payment delays, and suggested that capex cuts were just around the corner. Today, we see that many of our assumptions have played out.

Payments are being delayed. Genel, DNO, Gulf Keystone and HKN Energy have not been paid since January, when receivables for Aug-Sep 2019 were settled. Previously, payments were made with a three-month lag. We estimate that the companies have accumulated six-months of export receivables and continue producing and shipping oil at their own expense, which inevitably puts pressure on liquidity.

Cost-cutting is underway. DNO, Genel, Gulf Keystone and HKN Energy have announced substantial capex cuts, which most likely will reduce production in 2020 and 2021. DNO plans to save 30% of its 2020 budget and focus on Kurdistan rather than the high-cost North Sea operations. Genel expects to invest US$100mn vs previously guided US$160-200mn, but could go as low as US$60mn. Gulf Keystone put expansion on hold and plans to cut capex to US$40-48mn. HKN Energy stopped construction of the new processing facility and halted drilling. ShaMaran has not updated the market on its investment strategy yet.

Oil price dropped below US$30/bbl. Two weeks ago, we made an assumption about the oil price staying at US$35/bbl until the end of year, which implied an average price of cUS$40/bbl in 2020. With oil trading even lower, we assess the companies’ cash costs and liquidity against the new average oil price estimate of cUS$30/bbl, which could come to pass if Brent stays at its current level. Following capex cuts, we revise our model assumptions and reassess average operating costs per barrel of oil entitlement and breakeven oil prices before capex (Figure 1). Genel remains the only company with sufficiently low operating costs in the current environment.

How long can each company survive without being paid? It is not the first time that oil and gas companies operating in Kurdistan have faced delays in payments. In 2015-16, when a combination of low oil prices and significant military expense constrained the region's financial resources, the KRG resorted to partial payments. This helped oil producers to finance their running costs. When oil prices recovered, the KRG negotiated receivable settlement agreements and started paying regularly and fully for the companies’ oil entitlement. This time, it may take a while until payments resume. During this period, the companies will have to rely on their own financial resources. According to our rough estimates, Genel has enough cash to fund opex, interest and substantially reduced capex for 26-34 months. Gulf Keystone has 14-months of cash reserves and DNO has 11 months. HKN Energy could probably operate for about 6-8 months, if the KRG does not resume payments. SNMCN, however, could already have run out of money. 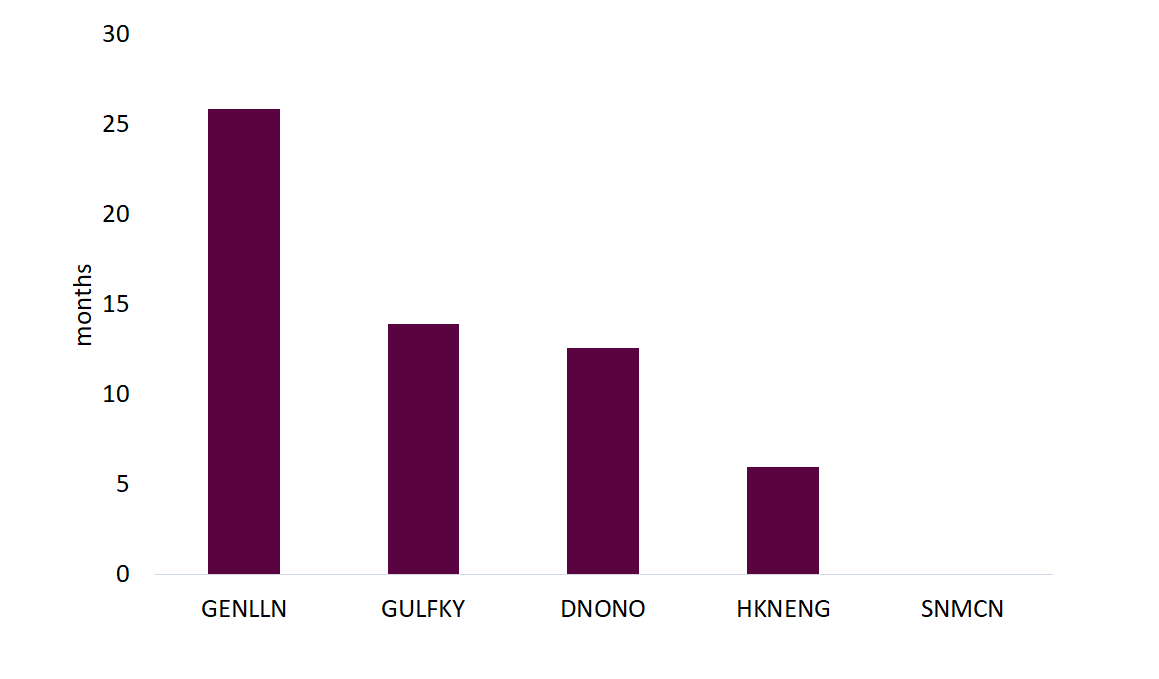 Bond recommendations. Kurdistan oil and gas bonds are indicated at distressed price levels. Because the companies have not received payments for Oct 2019-March 2020 oil shipments, and effectively spend their cash reserves to finance operating costs, their resilience to the oil price shock depends on the length of time they can sustain low or no payments. This and the recent price action are the main reasons for today’s change in our recommendations.

1) Upgrade GENLLN to Buy. Following Genel’s FY 19 results and conference call, we updated our financial model, incorporating revised capex guidance of US$100mn and adjusting our production forecast to reflect lower volumes at Tawke and new barrels from Sarta. Management withdrew 2020 production guidance due to volatility in the market. Genel had US$390mn of cash at the end of 2019 and received a US$54mn payment for Sep-Aug 2019 oil sales in January. We estimate that the company needs cUS$4.5mn a month to cover opex and G&A, cUS$30mn a year to pay interest on bonds and US$60-100mn for capex in 2020. Based on these assumptions, Genel’s cash reserves could cover its expenses for about 2.5 years without receiving payments for oil, which makes it the most resilient company in our Kurdistan oil and gas universe. These are turbulent times for oil producers, but Genel has accumulated significant liquidity buffers to weather the worst-case scenario.

2) Downgrade HKNENG to Sell. HKN Energy had a sizable capex programme for 2020 aimed at doubling production. However, the ambitious growth plans were put on hold: construction of the new 25,000boepd processing facility stopped, drilling halted, and a small part of production capacity (3,000 boepd) was idled according to the press release published on 26 March 2020. These are decisive and essential steps to preserve liquidity – it had a US$56mn cash balance as of 23 March 2020. We estimate that HKN Energy needs cUS$4.7mn for opex and G&A, cUS$8mn production bonus as production is expected to cross the 25mmboe threshold, US$5.5mn for September 2020 interest payment on its US$100mn notes due 2024, and a very small amount of capex from now on. With US$56mn cash on hand, HKN Energy could continue paying its running costs for the next 6-8 months including September 2020 interest, according to our estimates. This is not ideal, given the level of oil prices and uncertainty about the timing and size of the future payments from the KRG. HKN Energy operates the Sarsang block, a huge oil and gas deposit, which is still at an early stage of development and requires substantial investment, which cannot be made in the current circumstances. Although HKNENG 24s are indicated at a mid-price range of 50-65 according to Bloomberg ALLQ, the company’s limited cash reserves make it significantly more dependent on the KRG resuming payments within the next six months. We downgrade HKNENG 24s to Sell.

3) Reiterate Hold on GULFKY. Gulf Keystone had to postpone its FY 19 results publication following the FCA instructions to all LSE-listed companies. However, some of the key issues were addressed in the operating update. The company put on hold the investment programme, suspended production guidance and disclosed that its cash balance stood at US$154mn. We estimate that Gulf Keystone needs US$6.5mn a month to cover opex and G&A, US$10mn a year for interest on US$100mn notes due 2023 and will spend US$40-48mn on capex in 2020. Based on these numbers, Gulf Keystone could cover its expenses for 14 months in the absence of oil payments. This is a long enough period of time, significantly shorter than that of Genel, while both GENLLN 22s and GULFKY 23s are indicated in the price range of 70 to 85 on Blomberg ALLQ. Of the two bonds of the most cash-rich oil companies operating in Kurdistan, we prefer GENLLN 22s over GULFKY 23s.

4) Reiterate Hold on DNONO. DNO announced a 30% or US$300mn reduction of its 2020 budget, suspended production guidance and focused on key projects in Kurdistan. However, between the upcoming short-term debt maturities and costs to be paid in Kurdistan, the company’s US$486mn cash position at the end of 2019 and US$107mn received in January from the KRG do not look excessive. In Kurdistan, DNO operates the Tawke and Peshkabir fields, the same assets that made Genel so financially well prepared for the downturn. DNO, however, pursued M&A in the North Sea, spending a substantial amount of cash and increasing its operating costs. In Q4 19, DNO’s opex stood at US$3.3/boe in Kurdistan and at US$15.6/boe in the North Sea area. On the bright side, the North Sea receivables are likely to be settled in a timely manner. We estimate that with the oil price at US$30/bbl, the North Sea business could be FCF-neutral, if all exploration expenses and most capex is put on hold. In the short term, the North Sea can probably be self-funding. But Kurdistan operations will require cUS$11mn per month for opex and G&A and cUS$140mn for capex, according to our estimates. Add US$80mn in annual interest and a US$140mn bond maturity and DNO’s cash reserves could probably cover 11 months (until Feb 2021) without payments from the KRG. DNONO 23s and 24s are indicated at a mid-price of 53-60 according to Bloomberg ALLQ. Prices seem to be quite low and even attractive, but the time that DNO’s cash can buy to weather the market turmoil is not overwhelmingly long. We reiterate Hold on DNO.

5) Reiterate Sell on SNMCN. We downgraded SNMCN to Sell on 12 March 2020 as the company’s very low cash reserves at the end of 2019 made it highly sensitive to the timely payments for oil from the KRG. In January, ShaMaran received the delayed payments for Aug 2019. Although there were no further updates from the company, we assume that like all other players we cover in the region, ShaMaran has not been paid since. Atrush field, in which the company holds a 27.6% interest, is operated by Taqa, a diversified energy company that is majority-owned by the government of Abu Dhabi; it has not announced capex revisions yet. For Taqa, its share of US$130mn total investment budgeted for Atrush is a small amount, but for ShaMaran its US$30mn contribution is substantial. ShaMaran ended 2019 with US$15mn cash on its accounts and received US$7mn from the KRG in January. According to our estimates, the company is very close to running out of cash. In fact, it may have already happened.