Global bond yields resumed their trend higher yesterday as the markets took a step back following the rally seen on Wednesday. Gilt yields led the gains, while US Treasury yields pared some of their increases later in the US session as stock markets continued to sink. Bund yields, meanwhile, edged marginally lower at the front end of the curve but gained quite sharply through the belly and further out. This steepened the curve despite Germany’s CPI surging in September, rising to 10%, according to the preliminary figures. A key measure of volatility in the US bond market, the three-month 10yr swaption, has surged to over 150bp at the moment. This measure of expected swings in yields is now at highs not seen since the GFC in 2009. With expected volatility so elevated, price pressures still rising in certain countries, central banks remaining hawkish despite growth concerns, and now quarter-end flows, we expect to see another relatively volatile session ahead today and into the final three months of the year.

Ethiopia: As a result of the Ethiopian government continuing to lift fuel subsidies, the price of fuel rose by around 20% yesterday, marking the second increase in less than three months. Recall the Ethiopian government began to phase out subsidies for petroleum products in July, imposing an initial hike of 30-40% on petrol and diesel. The Ethiopian trade ministry said that it would revise the price every three months in line with the “country’s economic situation and the state of the oil market.” Under the new measures, the price of diesel was up by 22% to ETB 59.90 ($1.13), while the price of petrol rose nearly 20% to ETB 57.05. In addition to compounding further pressure on households, the increase in fuel prices is set to keep inflation pressures in the economy elevated.

Zambia: Economic growth in Zambia accelerated to 3.5% y/y in Q2 from 2.2% y/y in Q1. Improved performances of the public administration, education, manufacturing, information, and technology, as well as accommodation and food services sectors, underpinned the rebound in economic growth. While economic growth in Zambia improved, it remains to be seen whether it will be sustained in the coming quarters, given risks such as tightening global financial conditions, mounting growth risk in trade partner countries, and the negative impacts of the war in Ukraine.

Kenya: President William Ruto yesterday instructed the finance ministry to cut KES 300bn ($2.5bn) from the government’s annual expenditure this year. Moreover, Ruto seeks to reduce the expenditure further in 2023 to achieve a recurrent budget surplus by the third year. Ruto added that the government should never borrow to finance recurrent expenditure and called it “unsustainable.” Whether the finance ministry succeeds in achieving these targets remains to be seen, but the instruction by the president appears to be a step in the right direction in addressing its heavy debt burden. While Kenyan Eurobond yields continued to rise yesterday, the comments from President Ruto are encouraging and point to a more sustainable fiscal outlook.

Mozambique: The Bank of Mozambique will decide on its policy rates today. While inflation has risen for the past five months, the August reading of 12.10% y/y could be the high-water mark. Risks of a slower pace of price growth exist in the coming months amid government measures to subsidize transport and fuel imports. Therefore, we could see the central opt to keep its policy rates unchanged. That said, with global interest rates on the rise, a rate hike can’t be ruled out.

Nigeria: Nigeria’s cocoa exports declined 48% y/y in August. Specifically, exports of cocoa fell to 10,823 tons in August from 20,873 tons a year earlier, compared with a figure of 15,940 tons shipped in July. As cocoa exports are another significant source of foreign currency earnings in Nigeria, the decline is likely to reduce foreign exchange inflows and add to the ongoing dollar shortages. According to the International Cocoa Organization, Nigeria is ranked as the fifth-largest cocoa producer in the world.

Oil: Oil is heading for its first quarterly loss since the onset of the pandemic as we start the final trading for quarter 3. Escalating fears over the global economy and a rampant dollar have more than outweighed tight supplies in the market, bringing prices down from over $110 per barrel at the end of June to below $90 currently, when looking at the front-month Brent contract. This morning’s price action, meanwhile, has been driven by some weaker data out of China. Factory activity in the Asian nation struggled in September, according to the PMI data released, while the services sector saw its growth slow. The figures underscore the impact of China’s lockdowns and burdening debt levels and show that demand for crude from the world’s top importer is likely to remain weaker than average.

South Africa: South Africa's PPI slowed by more than expected in August, coming in at 16.6% y/y from 18.0% y/y in the month prior. The August print bettered Bloomberg consensus expectation of a less pronounced slowdown to 17.5% y/y. The global trend has been easing producer price inflation, partly due to commodity prices such as that of oil easing. A continued moderation of global oil prices could see PPI in South Africa ease further in the coming months, which may help to lower consumer inflation given how much of that has been supply-side driven. That said, a weakening rand poses a risk to that outlook.

While African currencies have broadly come under sustained selling pressure this year, with many trading in the red against the USD, the Zambian kwacha has been one of the few currencies to buck the trend. The kwacha is Africa’s second-best performing currency on a year-to-date basis. Favourable domestic developments have underpinned the kwacha this year. These include a recovery in foreign portfolio inflows into the economy and improved sentiment towards Zambia after it secured a final International Monetary Fund approval for a program. Central bank intervention and favourable trade dynamics have also supported the kwacha. 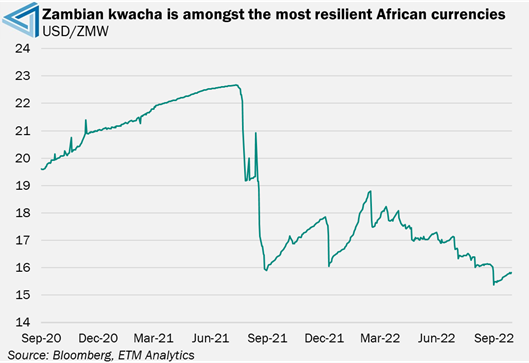 A firmer kwacha has helped contain inflation, bucking a broader global trend of record inflation. Headline inflation edged higher in September, coming at 9.9% y/y from 9.8% y/y in the month prior. On a month-on-month basis, prices fell 0.4% versus an increase of 0.3% in August. A breakdown of the data showed that annual food inflation rose to 12.1% in September from 11.3% in the month prior, driven by higher costs of cereals and fish. Meanwhile, non-food price inflation slowed to 7.2% from 7.8% in August. Despite the uptick in September, the headline inflation rate remains subdued compared to levels seen in 2021.

Inflation remaining in check and the disinflation in the monthly number could provide some room for policymakers to keep the policy rate unchanged at the next meeting. However, risks to the inflation outlook are present amid the reintroduction of the value-added tax and import duty for diesel and gasoline at the end of this month. Meanwhile, the kwacha has been under some pressure recently and could remain on the defensive next week due to dollar demand outstripping supply.

In line with the broader trend across the globe, the Central Bank of Kenya’s Monetary Policy Committee voted in favour of raising the Central Bank Rate (CBR) by 75bps to 8.25%. The Committee said that the decision to hike rates was driven by sustained inflationary pressures, elevated global risks and their potential impact on the domestic economy and concluded that there was scope for a tightening of monetary policy in order to further anchor inflation expectations.

Kenya has been among the least hawkish central banks in its tightening this year, having only raised its benchmark interest rate once in May before its decision yesterday. Yesterday’s decision is a sign that the central bank is committed to anchoring inflation expectations and preventing further depreciation in the shilling. While the decision to hike rates by 75ps would’ve helped quell inflation expectations, we still assess inflation risks in Kenya to be skewed to the upside, with government subsidies set to be scaled down in the months ahead. 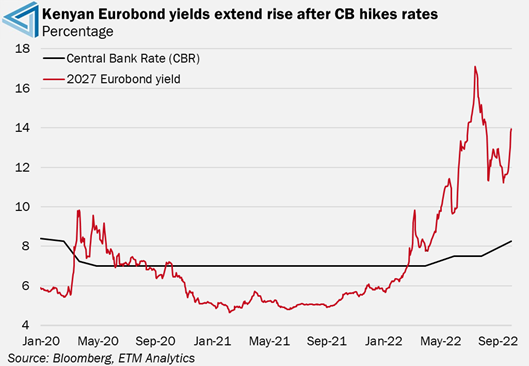 Moreover, notwithstanding the outsized rate hike yesterday, Kenya’s real interest rate remains pinned in negative territory, which is detracting from the currency’s resilience. Despite the deteriorating global growth outlook, the central bank remained optimistic about the performance of the domestic economy. Policymakers also made mention of the particularly strong tax revenue collections, reflecting enhanced tax administration efforts and increased economic activity, which are helping to offset some of the fiscal pressures from high debt servicing costs.

Despite the windfall tax collections, Kenyan Eurobond yields continued to leg higher on Thursday as traders repriced for a more hawkish interest rate outlook after the central bank noted that it stands ready to take additional measures if necessary. The larger-than-expected rate hike, hawkish policy statement, upside risks to the inflation and currency outlook, rising global interest rates, and risk-off conditions suggest that the bearish bias in Kenyan bonds is likely to persist in the weeks ahead. 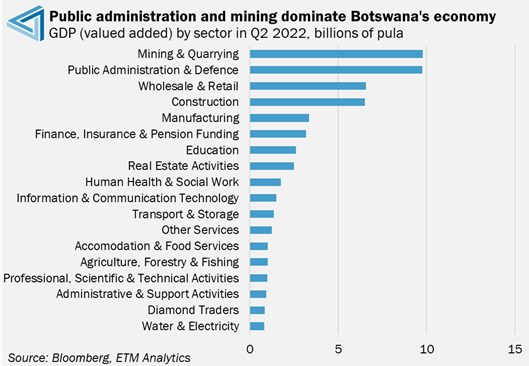