Those looking from the outside in at the financial markets would be forgiven for thinking they are fickle. Yesterday the day started with the bullion market focused squarely on the direction for rates and the rising US Treasury yields, and by the evening the tone had switched with recession fears out of the US underpinning the safe haven status of the metal.

This morning we have gold trading a tad under the $1845.00/oz mark as we head into the start of the EU session. There are a number of US economic data series slated for release today so the expectation is that we have a consolidative morning session in the run up to the data before we grapple with the question of higher rates over recession concerns once again.

Uganda: The Bank of Uganda is set to deliver its latest verdict on its benchmark interest rate today. Inflation has accelerated for four straight months, and at 6.3% in May, the reading is now above the 5% upper limit of the central bank’s target and suggests policymakers could act to curb price growth in the economy.

Africa: Reports quoting sources close to the matter suggest that the European Union (EU) is considering a proposal to channel around EUR 500mn ($535mn) to Africa to help combat the continent’s food crisis as the war in Ukraine cuts off vital supplies. EU leaders reportedly dis-cussed using untapped reserves from the European Development Fund to boost aid to the continent. Aside from a major humanitarian crisis, the EU has warned that severe food shortages could trigger a major migration wave into Europe from Africa and the Middle East.

Democratic Republic of Congo: The DRC is planning to set up a stabilisation fund to ensure its booming mining industry is not under-mined by external events like the war in Ukraine or pandemics. While high prices for Congo’s copper and cobalt have been a boon for the country, high fuel costs have eroded government revenue as many miners rely on diesel generators for their operations because of insufficient grid electricity. Mines Minister Antoinette N’Samba Kalambayi was quoted as saying, “We need to facilitate the supply of inputs and hydrocarbons” to maintain increased mining production. To do this, the government remains open to discussions with stakeholders in the sector, including mining operators, in order to jointly anticipate the perverse effects linked to this war and, ultimately, set up a stabilization fund.” The minister did, however, not provide further details.

Kenya: Kenya’s finance minister has reportedly asked parliament to raise the debt ceiling to KES 10trn ($85.69bn) from KES 9trn. Accord-ing to local reports, Treasury Cabinet Secretary Ukur Yatani has asked parliament to change the public finance management law to allow more borrowing to fund the budget in the year through June 2023. Note that Kenya last raised its debt in 2019 to KES 9trn from KES 6trn. President Kenyatta has ramped up borrowing since he took office in 2013, pushing the debt level to 60% of GDP, currently from 40% of GDP. Critics accuse Kenyatta’s government of saddling the country with steep repayment obligations, criticism it has rejected by saying the borrowed funds have funded infrastructure projects such as railways key to ensuring economic expansion. Recall last week National Treasury said that public debt will surpass a proposed threshold of 55% of GDP for the next four years owing to several challenges, including the pandemic, bad weather, and supply chain disruptions.

Malawi: To ease pressure on state finances, President Chakwera has reduced public servants’ travel budgets and fuel allowances. Accord-ing to Chakwera, government employees will be restricted to travelling abroad no more than three times for the remainder of the year, and the size of the delegation will be limited. Meanwhile, fuel allowances for cabinet ministers will be cut by 20%, and procuring entities will be barred from importing goods unless they can prove the same goods or services aren’t available locally. Chakwera was quoted as saying, “I know that the realignment of the exchange rate inflicts pain on all of you, because any increase in the price of imported commodities forces you to cut your spending. It is important that we who are your public servants do the same because the pain of making spending cuts due to the global rise in prices must be shared.” Note the measures announced by the president come after Malawi last devalued its currency by 25% to address a shortage of foreign exchange that has been exacerbated by a surge in commodity prices.

Nigeria: President Buhari has asked state governors from the ruling All Progressives Congress (APC) party to support him in choosing a successor who would stand for election in a presidential contest in February 2023. The APC party has set 6-8 June for its elections to choose a presidential candidate. If Buhari has his way and the governors who wield influence with voting delegates rally behind his candidate, it would force other contestants to withdraw from the race and avoid a vote.

From a currency perspective, the persistent current account deficit is one factor contributing to the notable weakness in the Kenyan Shilling (KES). For context, the currency has lost over 3% on a year-to-date basis and depreciated by more than 8% since the end of May 2021. An-other headwind for the KES has been elevated oil prices, given that Kenya is a net oil importer. Dollar demand from fuel and manufacturing companies that is outstripping supply has also compounded the downside pressure. That dollar shortage has resulted in the Kenya Association of Manufacturers, an industry lobby, warning earlier this week that it may create “a parallel shadow market with unwanted consequences.” The lobby added that importers are struggling to import raw materials because they cannot access dollars at the official rate of about KES 116 per dollar, forcing them to buy at a rate of KES 120 or higher.

Although the 50bps rate hike implemented this week and comments from the central bank governor that Kenya’s foreign-exchange market generates and distributes about $2bn a month, which is enough to meet all demand in the economy, could ease some of the selling pressure on local currency, we see risks remaining tilted to the downside. A growing external imbalance with Kenya’s current account balance coming under sustained pressure suggests that if unaddressed, room for further KES weakness exists. It is worth noting that non-deliverable forwards are currently pricing in depreciation for the KES to around 144 over the next 12 months. 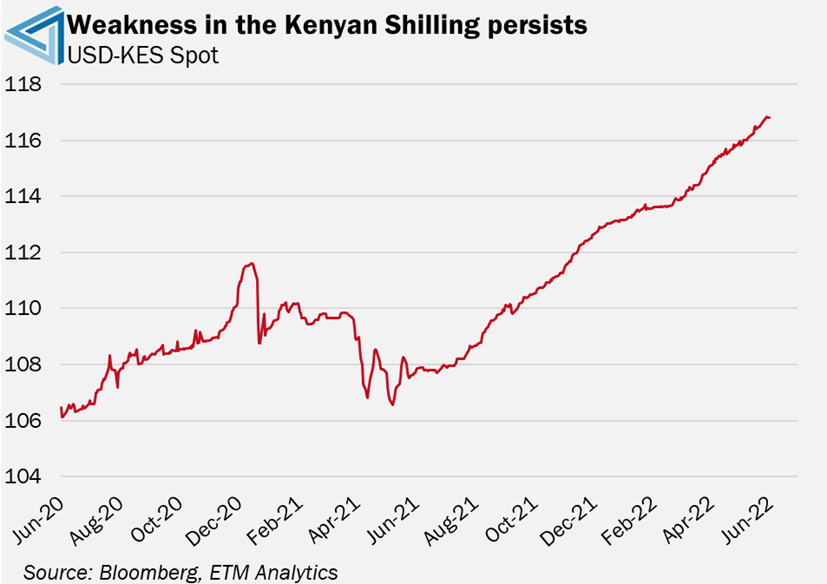 Moreover, it is worth pointing out that Uganda’s gross debt as a percentage of GDP (53%) is notably lower than that of Kenya’s (70%), suggesting that fiscal risks in Kenya are more pronounced than that of Uganda. Add to this the fact that Kenya (-6.9% of GDP) is expected to record a wider budget deficit than Uganda (-5.6% of GDP) in 2022 and in the years ahead. As such, Kenya’s debt trajectory is notably steeper than Uganda’s.

While Uganda’s bonds are trading at a premium to Kenyan bonds, it is worth noting that there has been a considerable compression in the premium over the past 18 months, largely reflecting the increased pace of fiscal degradation in Kenya. For context, the spread between Uganda’s 2031 bond yield and the 2031 Kenyan bond yield has narrowed from a peak of 439bps in March 2021 to around 128bps at the time of writing.

With fiscal risks in Kenya skewed firmly to the upside and political risks expected to intensify ahead of the August 9 presidential elections, we could see a further compression in the spread in the months ahead as traders price in additional risk into Kenyan bonds. 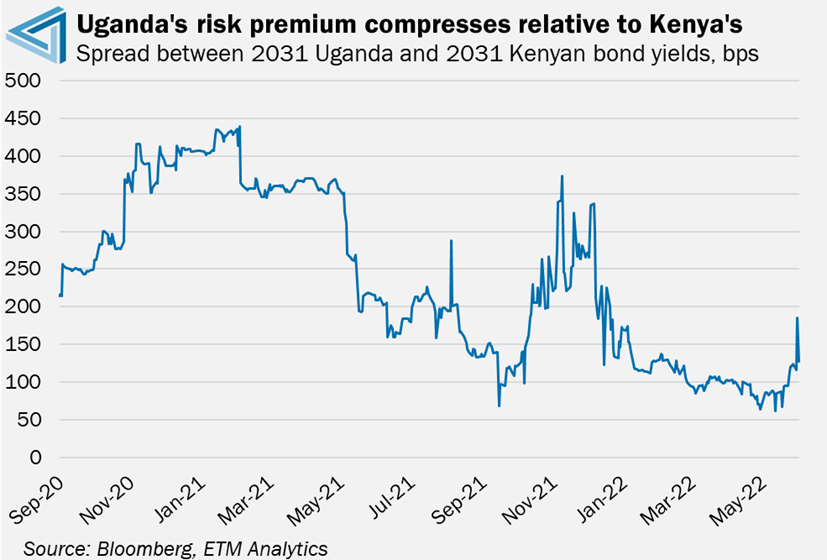 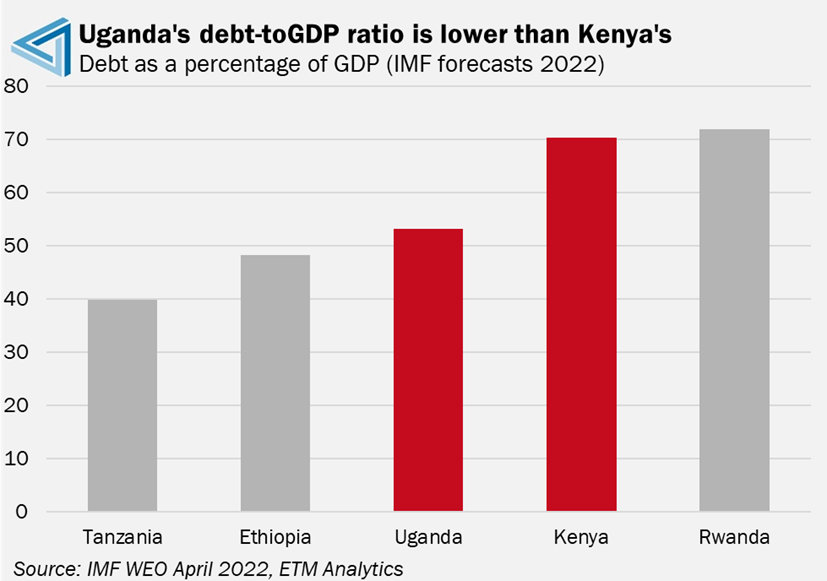 Macroeconomic: Manufacturing conditions in South Africa improve despite the reintroduction of load shedding

The start of the new month brought with it some fresh the latest PMI out of South Africa and Nigeria. South Africa’s Absa manufacturing PMI figure rebounded from a nine-month low of 50.7 in April to 54.8 in May. Five of the six underlying subcomponents showed an improvement, with the biggest contribution coming from the increase in new orders, inventories and purchasing commitments.

Although manufacturing activity in South Africa has improved, the average for the first two months of Q2 is still below the average recorded in the first quarter, which could suggest that businesses are still grappling with the impact of the devastating floods that hit the KZN in the prior month. Despite this reading, it is difficult to become overly optimistic about the sector's outlook given the warning of more bad weather in KZN, which could delay the repairing of damaged infrastructure and access to Durban ports, leading to tightening supplies of goods inland. Furthermore, the challenges of the manufacturing sector are also being compounded by SA’s lingering structural challenges, weak economic growth, high input costs, and the shortage of raw materials sourced abroad.

Meanwhile, Nigeria’s Stanbic IBTC Bank Nigeria PMI fell to 53.9 in May from 55.8 in the previous month, pointing to the twenty-third successive monthly improvement in Nigeria’s private sector, albeit at a slower pace. According to the survey, softer increases were recorded in output, new orders, purchasing activity and input inventories. That said, new orders continued to rise sharply which prompted a quicker expansion in staff numbers. On the pricing front, sharp price pressures were once again evident, with overall input price inflation among the quickest in the survey’s more than eight-year history. Despite the latest moderation in output growth, firms were optimistic that their output levels would expand over the next 12 months. In fact, the degree of optimism improved from April.