The latest FOMC minutes show that they plan on reducing the balance sheet by $95bn a month from May onwards. That would be almost double the previous balance sheet shrinking effort, which might accompany 50bp incremental interest rate hikes. It is a bold approach to tightening that will hold consequences for financial markets, given the greater degree of indebtedness worldwide.

As the Fed commits to rapidly tightening monetary policy, it bolsters its support for the USD. Interestingly, despite the FOMC minutes confirming the likelihood of 50bp rate hikes and a reduction in the balance sheet, the USD did not surge stronger. There is a lot priced in, and the reality is that enormous imbalances persist and make it difficult for the USD to gain traction to the degree that many would expect. High inflation, a large budget deficit, and a huge trade deficit offset many of the flows into the US to take advantage of higher rates. Then there is also the risk of a sell-off in US equities, and the picture is somewhat unclear, even though it retains its status as a safe haven. The EUR has stabilised just above 1.09 and bottoming, while the GBP is finding some support above 1.3050.

Kenya: Data from the budget controllers office showed that arrears by Kenya's 47 county governments to contractors, suppliers, and for statutory deductions such as taxes and pensions fell to $792.6mn y/y in the period to March. Meanwhile, pending bills by the devolved administrations KES 91.3bn, compared with KES 106.4bn. The fall in arrears is a welcome development after payments to contractors, suppliers, and pension funds climbed 45% to KES 467.7bn ($4.11bn),  squeezing cash flow for businesses despite a presidential order to prioritise such payments.

Namibia: Speaking yesterday, central bank Governor Johannes Gawaxab said that the bank was moving closer to setting up a digital currency after conducting a study into its adoption. According to the Governor, "we cannot ignore CBDC, it is a reality out there and for that reason, the Bank of Namibia has started researching CBDCs and they very soon will go out with consultations." There is "a need for central banks to have a clear digital currency agenda to reinforce central bank authority over money and maintain control over the payment system."

Nigeria: The Central Bank of Nigeria has fined several lenders for failing to comply with regulations that bar customers from transacting in cryptocurrencies. The charges are part of efforts by the CBN to ensure commercial lenders implement a February 2021 order to block trading in cryptocurrencies because of the threat that it says they pose to Nigeria's financial system. According to Paxful, a Bitcoin marketplace, Nigeria accounts for the largest volume of cryptocurrency transactions outside the US.

Rwanda: The International Monetary Fund reported that Rwanda's economy expanded by almost 11% in 2021, largely due to its swift pandemic response and accelerated vaccination campaign. The expansion follows a contraction of 3.4% in 2020. However, the Washington-based lender warned that the outlook for this year is clouded by Ukraine war effects and related uncertainties, which are likely to put the economy under strain. According to the IMF, "although the magnitude of the impact is difficult to foresee at this juncture, staff will revise growth projections down relative to the previous review, with risks tilted to the downside." Meanwhile, higher global energy and commodity prices are set to fuel inflationary pressure and widen the current account deficit this year.

Zambia: UK Minister for Africa Vicky Ford yesterday announced that Britain's Moxico Resources plans to invest $100mn to expand its majority-owned Mimbula copper mine in Zambia. According to Ford, the investment will create new jobs and increase tax revenues for the Zambian government. Ford was in Zambia to launch a new investment model, which she said marked a key moment for Britain's financing of private sector growth and infrastructure across Africa. Ford added that the UK is committed to support countries to grow their own economies, bolster private sector investment and trade, and deliver the returns that will support broader socio-economic development.

In its monthly economic report, the Bank of Tanzania reported that the current account gap widened further to $2,759.0mn in the 12 months through February 2022 from $1052.1mn in the corresponding period of 2021. According to the BoT, the widening of the gap resulted from a more pronounced increase in imports relative to exports which saw the trade account remain in deficit territory. 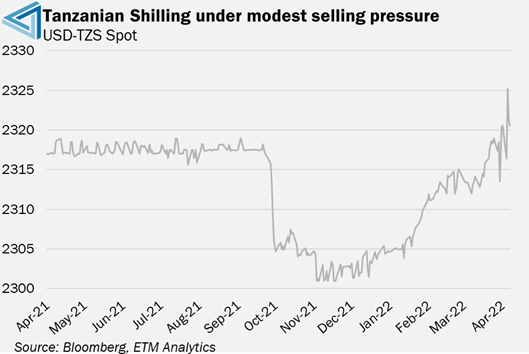 Zooming in on some of the current account components, during the 12 months ended February 2022, exports of goods and services increased to $10,160.8mn from $8,302mn in the corresponding period of 2021. A significant increase was registered in non-traditional exports and travel receipts. Meanwhile, imports of goods and services rose by 41.2% to $12,552.7mn, with much of the increase in intermediate and consumer goods, particularly white petroleum products and pharmaceutical products.

From a currency perspective, a persisting current account deficit is likely to further compound the Tanzanian Shilling’s losses. For context, despite yesterday’s gains, the TZS has lost 0.68% on a year-to-date basis against the USD primarily due to increased importer demand and reduced support from inflows. That said, the TZS is expected to find support from inflows of commodity exports this week. Beyond that, further support could materialise from inbound investments, tourism inflows and strong reserve levels.

The bearish bias in Kenyan bonds is not confined to just the secondary market, with the Central Bank of Kenya reporting that the country’s latest bond sale was undersubscribed. Specifically, the central bank said in an emailed statement that bids for the country’s 3-year domestic bond at the latest auction came in at KES 34.05bn, below the initial offer of KES 40.00bn, resulting in an under subscription of 85%. The central bank accepted bids worth KES 33.10bn.

The 5-year bond sale was however fully subscribed, with investors offering to buy 1.03 times the amount of securities sold. The central bank allotted KES 33.14bn in 5-year bonds Wednesday. The bonds sold at a price of KES 100, have a yield of 11.78% and will settle on April 11. Note that previous auctions this year have also been undersubscribed, with the central bank failing to place its full allotment of 5-, 15- and 25-year bonds in March. 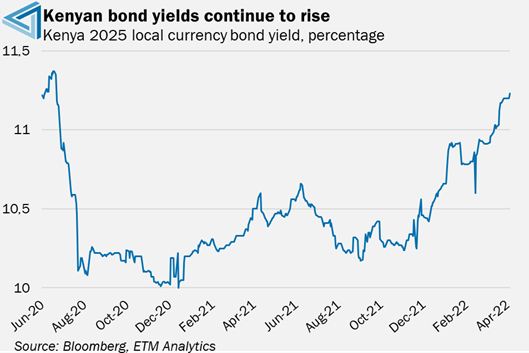 Looking ahead, the combination of heightened domestic fiscal fears and increased inflation pressures amid the price shocks being caused by the Ukraine crisis together with mounting external headwinds, including the hawkish shift in monetary policy across developed markets and the adverse impact of the war in Ukraine on global risk appetite will continue to weigh on Kenyan bonds both in the primary and secondary market.

Against this backdrop, yields across the Kenyan bond curve are expected to continue rising in the months ahead unless inflation pressures ease and there is a meaningful shift to a more sustainable fiscal trajectory from the government. However, this is unlikely to be the case with an election on the horizon. The favourite presidential candidate has already made some remarks that have raised the hairs of fiscal hawks. The focus now for fixed income traders will be squared on Treasury Secretary Ukur Yatani’s budget presentation to lawmakers. Kenya has brought forward its budget presentation to April from June to ensure lawmakers debate and approve the spending plan before the elections scheduled for August 9.

East African countries have been hit hard by the price shocks caused by the war in Ukraine. Fuel and food prices, together with the supply of both goods, are also being heavily impacted by the ongoing global supply chain pressure and idiosyncratic challenges. Kenya has been in the spotlight in recent days due to the fuel supply shortage in the country, which has now extended into a second week.

Bloomberg reported late on Wednesday that the Kenyan government has agreed to compensate oil marketers for selling fuel they imported at rates higher than the retail cap, a move aimed at ending the fuel supply issues in the country. Fuel retailers will now be subsidised to sell petrol and diesel from shipments that arrived after the March 15 monthly pricing window. This means that the current retail prices will remain the same until the next review.

While the government has said that there are adequate supplies of fuel in the country, ques at filling stations have persisted for a second straight week in Kenya. This has primarily been a function of delayed subsidy payments to fuel retailers, which disrupted fuel deliveries across the country, sparking panic buying and a sharp increase in demand. The new measures aim to address the price dislocations and ensure that the supply of fuel is undisrupted.

In addition to the fuel subsidies, the government has directed multinational fuel companies to dedicate a portion of their imports to independent fuel retailers that the pandemic has the hardest hit. From a fiscal perspective, the KES 34.4bn fuel subsidy approved in the supplementary budget will undoubtedly add to fiscal concerns, putting additional pressure on domestic assets.