Kenyans head to the polls, emerging market bonds are rebounding

Global bond yields retreated yesterday as the market corrected following Friday’s post-NFP data surge. The market continues to price in slowing economic growth as expectations remain high that the Fed and other major central banks will continue to hike rates and tighten policy in order to bring down inflation. As has been the theme in recent sessions, the UST curve continues to invert, with the 2v10 spread now at around -44bp. Gilt and bund yield curves have also been flattening out in recent sessions, with both near their flattest in months as growth concerns remain entrenched across the globe. This flattening bias will likely persist through the session ahead with focus on Wednesday’s CPI releases out of the US and Germany. Traders will be bracing for more strong numbers given that we have had topside surprises for previous month’s reports.

In the commodities market, oil prices are holding onto their gains from yesterday, which saw Brent rise towards $96.50 per barrel and WTI trade near $90.50 per barrel. Bullish sentiment came amid a weaker USD and lower UST yields, with the market correcting following Friday’s post-NFP data moves. Despite yesterday’s gains, the outlook for oil remains relatively bearish over the near term, with the macroeconomic backdrop pointing to further weakness ahead. At the same time, the tightness of the market we have seen for 2022 so far has started to ease. Key timespreads across the futures curve continue to narrow, with Brent’s prompt timespread currently around $1.50 per barrel, down from nearly $2 a barrel this time last week. Market liquidity also remains very low, which has contributed to the volatility we have seen for prices over recent weeks.

Ghana: The Finance Ministry yesterday expressed disappointment over the rating downgrade by S&P and said that it was determined to emerge from its economic slump swiftly. The Ministry said that Ghana's worsening economic state had been exacerbated by "global external shocks" and that various revenue-saving measures introduced at the beginning of the year would soon bear fruit. S&P last Friday lowered Ghana's local and foreign currency credit ratings to CCC+/C from B-/B, pointing to the government's "limited commercial financing options, and constrained external and fiscal buffers." The Ministry added that "the government is committed and is confident that it will successfully emerge from these challenges in the shortest possible time." The latest downgrade follows downgrades from Fitch and Moody's at the start of the year. Ghana has since been unable to tap global capital markets, which the finance ministry and the central bank have partially blamed on the downgrades.

Kenya: Kenya’s election commission yesterday cancelled four local polls and announced the arrest of six officials ahead of the high-stakes presidential vote, raising alarms after a campaign dominated by rigging fears. The Independent Electoral Boundaries Commission (IEBC) said that gubernatorial polls in the counties of Mombasa and Kakamega, as well as elections for  MP in the Kachiliba and Pokot South constituencies, would be postponed until further notice due to erroneous ballot papers. The announcement by the IEBC will do little to ease worries over rigging. Presidential poll outcomes have been routinely disputed over the last two decades, and the discord often  spills over into violenc

Angola: Ratings agency S&P affirmed its 'B-' long-term and 'B' short-term sovereign credit ratings on Angola with a stable outlook. According to S&P, the stable outlook balances the country's still-large external funding needs and financing risks over the next 12 months, amid rising global headwinds, against broadly stabilizing government debt levels over 2022-2025. S&P added that the ratings could be lowered if the government's access to external funding weakens, which could limit its ability to service external commercial debt or if a deterioration in the external environment, such as lower oil prices or volumes or increasing social pressures, heightens external and fiscal pressure. While unlikely over the next year, S&P said it could raise the ratings if economic and fiscal reforms support a sustained recovery in the non-oil economy while reducing the debt-servicing burden and borrowing costs and increasing foreign currency reserves beyond projections.

Tanzania: The International Monetary Fund (IMF) board approved a 40-month $1.05bn Extended Credit Facility (ECF) for Tanzania with about $151.7mn disbursed immediately. The 40-month financing package will assist with the economic recovery and address the spillovers from the war in Ukraine, help preserve macroeconomic stability, and support structural reforms toward sustainable and inclusive growth, drawing on the government's priorities.

Nigeria: To fund a solar power project being developed by Sun Africa LLC, a renewable energy provider, Nigerian authorities will seek credit from the US Export-Import Bank. The unit of Urban Green Technologies LLC is developing solar power facilities for Nigeria’s Niger Delta Power Holding Co.  According to an official from Sun Africa, the projects which have passed through feasibility studies, technical analysis, and land-permitting phases in the past two years are due for loan processing with the export credit agency. The Nigerian Finance Ministry is expected within the next 60 days to send a “final commitment application” to EXIM for the facility, after which the lender will conduct due diligence on the projects before the loan is finalized. Nigeria plans to integrate solar into its energy mix to boost supply, as poor maintenance and insufficient investment in the transmission network have resulted in only about a third of the country’s installed capacity being dispatched by the grid daily.

The first trading session of the week saw the Kenyan shilling weaken amid strong demand for dollars from oil importers and scant dollar supply ahead of the August 9 presidential elections. The KES weakened to close just shy of Thursday’s record low north of 119 per dollar, adding to year-to-date losses of over 5%. A broader bearish bias remains entrenched in the KES, with the currency weakening for the 14th straight month in July, the longest stretch of monthly losses on record. 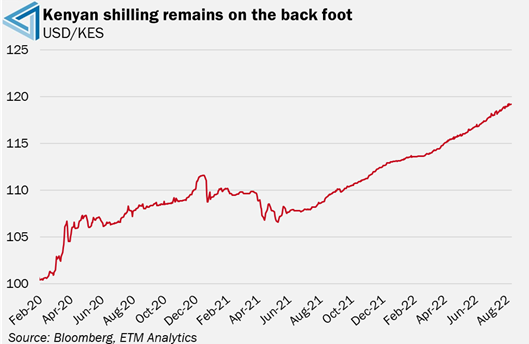 The KES has weakened along with its East-African peers as elevated global food and oil prices have weighed heavily on the trade and current account balances of currencies in the region. Elevated oil prices have driven Kenya’s import bill higher, while increased dollar demand has not been matched by supply amid reduced inflows from key export earning sectors. While remittance inflows have remained strong, agricultural export earnings dropped 17% in the first quarter from a year earlier, and tourism income is projected to slow this year, according to the central bank’s projections.

With dollar inflows expected to remain subdued in the near-term and demand for key imports strong, risks exist that the KES could remain on the back foot in the near term. Election-related uncertainty in the next couple of days as investors await the outcome of today’s election could also add some downside pressure.

While emerging market assets remain on the back foot with equities and currencies under fire, EM bonds have managed to stage a modest recovery in recent weeks. After falling to a multi-year low in mid-July, the JP Morgan USD Emerging Market Bond Index has climbed more than 9%. Underpinning the recovery in emerging market bonds has been the repricing of the outlook for global interest rates as growth concerns intensify. 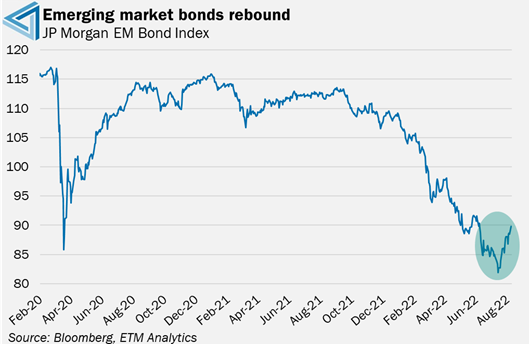 The US OIS market and Fed Fund Futures market are both pricing in notable rate cuts for 2023 and 2024 as the outlook for the US economy continues to sour. Specifically, the OIS and Fed Fund Futures are pricing in a drop in US interest rates from 3.50% at the end of this year to 3.07% at the end of next year and 2.27% and 2.59%, respectively, for the end of 2024. The dovish shift in implied interest rate expectations has resulted in a significant flattening in bond yields across the world as yields on the belly and long-end continue to fall.

The weekly US exchange-traded funds data published on Monday added to the notion that emerging market bonds are rebounding. The data compiled by Bloomberg showed that US-listed ETFs that invest in emerging market bonds attracted inflows of $398.4mn last week. The biggest inflows were into EMEA ($180.9mn) and Americas ($129.5mn).

Macroeconomic: Kenyans head to the polls today with Odinga and Ruto the two most likely candidates

Yesterday we saw the Kenyan shilling head for its most significant drop versus the dollar since December 2020, driven by the risks and uncertainty surrounding the election. After the last election, deadly violence erupted and more than 1200 people were killed. Concerns that we could see similar bouts of violence break out in the days ahead is a factor that foreign investors are concerned about and will be keeping a close eye on. The election will hopefully be smoother than it has been previously. However, allegations of election fraud are still likely. 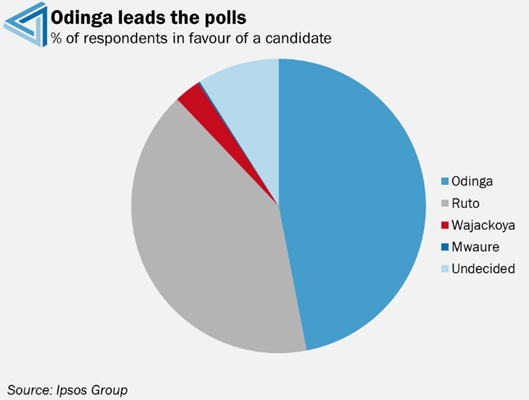 This is expected to be the closest election in Kenya’s three-decade-old multiparty democracy. Whoever wins the election will inherit an economy that is expected to slow to 5.1% growth, from 7.5% in 2021. Inflation has accelerated to 7.9%, and it seems unlikely that this will come down in the coming months. Therefore, the new president's focus in the coming months needs to be on what fiscal policies can be implemented to try and turn around the economic outlook for Kenya.

Over the last few weeks leading up to the election, business confidence has been falling, which has likely resulted in a possible delay in some projects and investments. The hope is that there will be no disputes or social unrest as a result of the election and that the effects on the economy will be temporary. However, there are some concerns that this will not be the case. The new president will also need to address Kenya’s fiscal issues and steer the country to a more sustainable path.