Notwithstanding the retreat of the USD through the final sessions of 2022, it still ended the year with the best performance since 2015, gaining nearly 8% on a trade-weighted basis. 2022 will likely go down as the year that the USD peaked in its overvaluation. The weaker USD trend through the final week will likely extend through the start of 2023 as global market forces continue to mount against the USD. Although the Fed has raised rates by 425bp since March, it will likely be the first central bank to start cutting should inflation retreat and global levels of risk aversion subside.

The USD is overvalued, the US trade and budget deficits are significant, and the overall business cycle is weakening. There is no shortage of justification for why the USD could and should depreciate. Of course, it is a relative game, and those same fundamentals apply to different jurisdictions too. However, a lot is priced into those other major currencies. Concerning the USD, the opposite holds true, which leaves the USD vulnerable. 2023 remains the year when an overvalued USD normalizes to some degree and other currencies recover.

The EUR-USD started the year on the front foot and is trading up to 1.0700 this morning, while the GBP-USD is showing some appreciative bias, but off a softer base as it trades up to 1.2075. Finally, the JPY has made back more ground as carry trades are unwound and is on the brink of trading back below the 13.00/dlr mark.

Kenya: Consumer price inflation in Kenya slowed to 9.1% y/y in December from 9.5% y/y in November. Prices rose 0.5% in the month from 0.3% in November. The main driver of December's deceleration was slowing annual food and non-alcoholic drinks price growth, the largest component in the inflation basket to 13.8%, compared with 15.4% in November. Furnishing and household equipment inflation cooled to 9.9% from 10.6% in November. Overall, Kenya's inflation averaged 7.7% in 2022, the fastest pace of price growth since 2017, when a severe drought drove up food costs. Inflation in Kenya has been fanned by the worst drought in four decades, a slump in the shilling against the dollar, and a surge in the prices of international commodities, such as wheat and gasoline, due to supply chain disruptions and the war in Ukraine.

Morocco: Data from the foreign exchange regulator showed that Morocco's trade deficit widened 56.9% to 287bn dirhams ($27.5bn) in the first 11 months of 2022, mainly due to higher energy costs. Morocco's energy bill soared the most, up 110% to 141.5 billion dirhams, while the cost of wheat imports more than doubled to 24 billion dirhams after the worst drought in decades. A breakdown of the data showed that imports rose 42.3% from a year earlier to 676bn dirhams, while exports increased 33% to 389bn dirhams.

Tunisia: Against a backdrop of surging inflation, Tunisia's central bank raised its benchmark lending rate for the third time this year on Friday. Specifically, the Banque Centrale du Tunisie raised its lending rate by 75bp to 8%. The bank, in a statement, said that "through this action, the central bank aims to help curb the upward trend in inflation." The bank also raised the minimum interest rate on savings to 7.0%.

Uganda: Headline inflation in Uganda slowed to 10.2% y/y in December from 10.6% y/y in the month prior. The December reading was the slowest pace of price growth in the economy in three months and marked the second straight month that price growth has slowed. The continued slowdown in inflation is likely a reflection of the impact of the previous monetary policy decisions of the Bank of Uganda (BoU). Note that the BoU forecasts inflation to drop between 6%-8% this year before stabilizing around the 5% target at the end of the year. This forecast is based on the dissipating impact of earlier increases in global commodity prices, subdued domestic demand, effects of the current monetary policy stance, and expected decrease in global inflation.

Uganda: Uganda reportedly plans to borrow almost UGX 10trn ($3bn) from domestic and international markets to help finance the 2023/24 FY budget. According to a ministry of finance 2023/24 budget document seen by Reuters, the government plans to draw around 80% of its borrowing from international credit markets while the rest will be contracted locally. According to the document, loans from international markets will be tilted toward cheaper sources as the government focuses on limiting debt service costs. The borrowing plan comes despite opposition criticism of reckless borrowing to fund wasteful spending, while the central bank has said the rising cost of public debt repayments was putting undue pressure on public finances.

Metals: Iron ore futures ended a volatile year firmer on Friday, with Dalian futures settling near a more than six-month high, as optimism within the top steel producer China is improving as pandemic controls and economic support measures are being unwind. Meanwhile, 3m LME copper is down 0.52% during the Asian session this morning, copper prices were also falling on Friday, resulting in the metal heading for its first annual drop in prices since 2018 due to worries about demand due to a global growth slowdown and rising inventories.

2022 was a year for the Kenyan shilling bears. The shilling weakened to north of 123 per dollar on Friday to close the year down by over 9% against the USD, according to Bloomberg data. That yearly loss was the biggest since 2015 and saw the shilling rank as the worst-performing East African currency among those tracked by ETM. 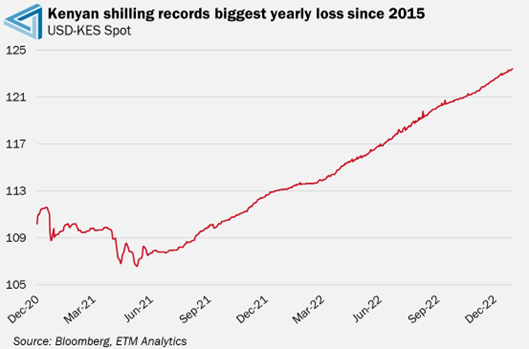 Increased demand for dollars from energy importers on the back of high global oil prices, reduced dollar inflows from key export-earning sectors, and tightening global financial conditions are some of the factors that weighed on the shilling in 2022. Kenya's foreign exchange inflows have been impacted by tighter global financial conditions, which have led to a rotation out of the country's stock market and the negative impact of the war in Ukraine. Persistent drought conditions have also weighed on the agricultural sector and, in turn, exports. Note the country's benchmark stock index was Africa's worst performer in 2022. Kenya's key stock index dropped almost 24%, the biggest decline since 2011, making it the region's worst performer in local currency terms.

At the start of the first trading week of 2023,  the outlook for the shilling remains tilted to the downside as increased demand for dollars from importers, especially oil companies, is set to weigh. That said, the central bank could interevent in the market by selling dollars, which might provide some reprieve for the currency.

Fixed Income: Monetary policy is expected to change course in 2023 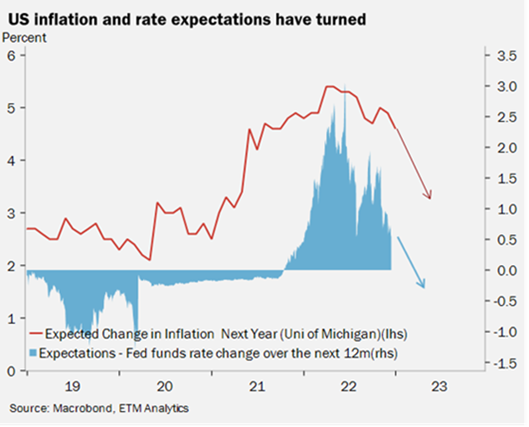 As the high base effects of 2022 take hold against the backdrop of lower commodity prices, we expect inflation to fall sharply, prompting central bankers to turn dovish and loosen policy in the second half of 2023. As was the case this year, emerging market central banks will move in lockstep with the Fed in 2023 in order to maintain their respective monetary policy differentials.

Against this backdrop, with inflation risks still skewed to the upside, the broader bearish bias in bonds is expected to persist in the near term. That said, based on our view on global interest rates and the deep sell-off recorded in 2022, bonds look set to record a meaningful recovery from Q2 onwards.

Macroeconomic: Oil is expected to average around $85/pbl in the early stages of 2023

Oil ended 2022 on a high, closing the year at near $86 per barrel when looking at the Brent front-month contract. The outlook for 2023, however, remains quite uncertain as although the global oil market is expected to tighten, which would be supportive of prices from current levels, our view is that the demand outlook is considerably weaker for major consumers such as the US and Europe than what many currently predict. 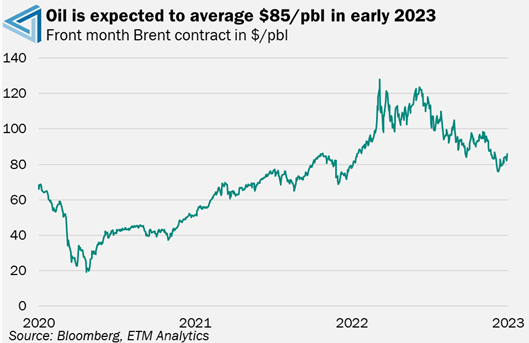 Therefore, we see the market entering into a smaller structural deficit than most predict, which will limit the topside pressure on prices. Oil could average around $85 per barrel through the early stages of 2023 as a result, but the market may come under pressure around the second half of the year onwards as the US and other major economies weaken. Support could then come around the $70 per barrel mark as the US will use this to refill its strategic reserves.

Once this short-term support is removed, prices could revert back towards their longer-term mean between $60 and $65 per barrel late in 2023. A final point to note is that the volatility seen through 2022 will likely persist through the early stages of 2023, with trading volumes low and Europe's sanctions on Russian shipments still be navigated with difficulty.