Gold slipped below the $1920.00/oz mark on Friday, driven by a stronger dollar and firming US Treasury yields which made tactical longs slightly uncomfortable. This narrative has continued this morning and we have seen the yellow metal once again pushed lower. 2yr US treasury yields have touched a three-year high of 2.4930%, driven by thoughts of a Fed tightening aggressively to curtail inflation pressures as unemployment hits a two-year low in the United States.

That said, it would be difficult to imagine a full-scale retreat currently, given the geopolitical bid that gold enjoys as a result of the Russia-Ukraine conflict. Germany is pushing for a discussion on the banning of Russian gas as EU officials accuse the Russian forces of atrocities that will underpin the geopolitical bid. The strategy remains one of buying on any dips.

Oil prices are holding steady this morning, nursing last week’s losses as renewed demand concerns out of China and an upcoming release of barrels from the US strategic reserves weigh on the market. Brent is trading just above $104 per barrel, running into support at its 50DMA at $102.52, while WTI has dropped below the $100 per barrel mark. The news of the SPR release from the US and a possible global coordinated effort run by the IEA has meant that focus can turn to demand-side considerations, with China’s COVID policies a major factor to watch. Approximately 25mn people in Shanghai are under some form of lockdown currently, which should prove to be a significant hit to demand over the near term

Democratic Republic of Congo: Fitch on Friday affirmed the DRC's long-term foreign-currency issuer default rating at 'CCC.' Note that Fitch does not usually assign outlooks to sovereigns with a rating of 'CCC' or below. According to the ratings agency, the 'CCC' rating reflects high government debt, weak governance indicators, high oil dependence, and weak management of public finances with a recent history of defaults. It also reflects the possibility that the authorities seek debt restructuring under the Common Framework, potentially impacting private creditors. Meanwhile, Fitch noted that the in oil prices and the recently agreed IMF programme reduce immediate liquidity pressures and substantially improve fiscal and external metrics. Factors that could lead to ratings downgrade include, increased signs that default is probable, for example, if the government decides to pursue a restructuring under G-20/Paris Club Common Framework, including debt to private creditors. Conversely, a sharp decline in public debt-to-GDP, accompanied by a durable easing of sovereign financing stress, could lead to an upgrade.

Ghana: In a bid to support the Ghanaian Cedi and support the appreciation against major currencies while also triggering a fuel price reduction in the country, the Bank of Ghana has injected around $100mn into the forex market. The move is part of the bank's plans to boost the US dollar supply and make them available for Bulk Oil Distributing Companies with the requisite licences and qualifications. According to a statement from the bank, the amount made available to the FX Forward Auction is limited to the 30-day tenor. Note that prices of petroleum products have been on the rise for the past few weeks in Ghana, starting the year at around GHS 6.60 ($0.82) a litre but now hovering around GHS 9.60, a more than 45% increase. This comes on the back of a weaker exchange rate and the War in Ukraine, which has triggered a surge in the oil price.

Kenya: In a survey of chief executives conducted by the Central Bank of Kenya, business activities across the country are gradually returning to pre-COVID levels following the lifting of most restrictions. Moreover, the survey reported that most businesses had experienced growth in quarter one of 2022 compared to the previous quarter as demand rose. According to the central bank, the chief executives remain optimistic that the growth would be sustained in the subsequent quarters due to the easing of the COVID-19 containment measures, continued government spending on infrastructure, anticipated favorable weather conditions, and continued recovery from the effects of the pandemic. That said, downside risks to the outlook include rising geopolitical tensions, increased political activity ahead of Kenya's August polls, and elevated purchase prices due to continued global supply chain disruptions.

Morocco: To help Morocco's economic recovery from the coronavirus pandemic, the African Development Bank (AfDB) has pledged to extend a $1bn loan. According to the AfDB, the funds will be channelled to development projects in many important fields, including water, agriculture, social inclusion, human development, and infrastructure. Furthermore, the funds will allow the Moroccan government to cope with drought, agricultural support programmes, and ensure food security. Note, the assistance comes on the back of the recent loan of $180mn by the World Bank to assist the agricultural sector, which is currently facing its worst drought in about four decades.

South Africa: The Absa PMI gauge climbed to 60 in March from 58.6 in the month prior, reporting its highest monthly reading since record-keeping began in 1999. The main index has been above the 50-point neutral mark for eight consecutive months, suggesting conditions in an industry hard hit by stop-start coronavirus-lockdown restrictions, global supply-chain disruptions and July's riots have continued to normalise. The PMI figures also imply that SA's manufacturing sector should post robust quarterly expansion in the first quarter. Looking ahead, the recovery could, however, come under renewed pressure. Survey respondents have flagged sustained high prices stemming from the Ukraine war, domestic fuel price increases, supply chain disruptions and heightened shortages of inputs amid coronavirus lockdowns in China as key concerns.

Forex: Overvaluation in the Kenyan Shilling suggests that there is still room for further losses

The bearish bias in the Kenyan Shilling remains intact, with the currency suffering its tenth consecutive monthly loss last month. The KES weakened by 1.02% in March to add to losses of around 8.0% since May 2021. The sustained depreciation has seen the KES plunge to its weakest level on record, according to Bloomberg data going back to December 1988. 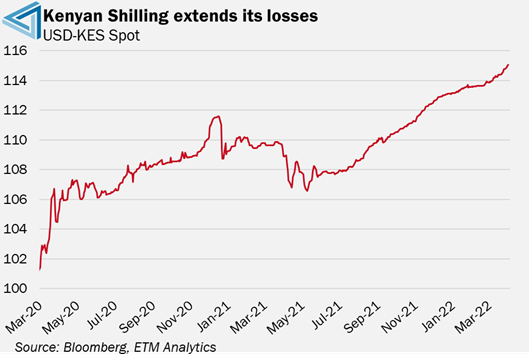 A deterioration in external conditions added to the headwinds for the KES last month. Since February, the global outlook has worsened amid the Ukraine war, rising oil and commodities prices, decade-high inflation in the US and some countries in Europe, and persisting concerns over the resurgence of coronavirus infections. Domestically, increased dollar demand and a widening current account balance have added downside pressure on the KES. Increased dollar demand is being driven by local companies disbursing dividends to foreign investors as well as oil importers.

Increased dollar demand from Kenya’s energy sector and listed companies paying dividends to their foreign shareholders are set to weigh on the KES in the first full week of April. However, expectations are that remittances, Kenya’s largest source of foreign exchange, are set to continue growing as the cost of sending home for Kenyans living overseas falls. Nevertheless, the KES remains overvalued on a real effective exchange rate basis, suggesting that there is room for further depreciation.

African countries have benefitted massively from the surge in international commodity prices over the past 12 months as demand recovered and supply risks intensified. The spike in international commodity prices has improved trade and fiscal dynamics for many African countries, with increased exports boosting foreign currency inflows and tax receipts. One of the biggest beneficiaries of the surge in commodity prices has been South Africa. This is reflected by the country's drastically improved terms of trade and better than expected tax revenues, resulting in a markedly improved fiscal position. 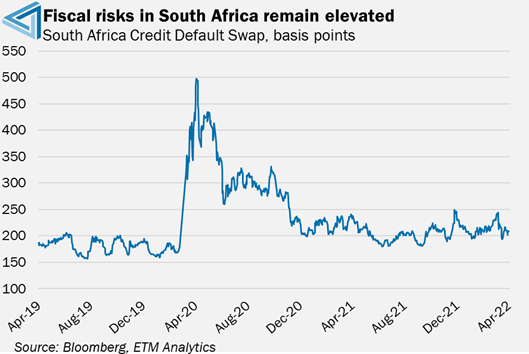 On the back of the better than expected tax collections and the government’s fiscal consolidation measures, Moody’s upwardly revised South Africa’s soveriegn credit rating outlook from negative to neutral. Moody’s also affirmed South Africa’s Ba2 credit rating. The global rating agency said in its report released late on Friday that high commodity prices have boosted the profitability of companies in the mining sector, which contributed to a 58% increase in corporate income tax in the 2021 fiscal year, or 2% of GDP higher than planned in the initial budget. Moody’s added, “ät the same time, for the first time in many years, the government limited the growth of its wage bill to 1.6%, well below inflation. These were the two key factors behind the reduction in the government's primary deficit to 1.3% of GDP in FY2021 from 5.7% in FY2020 and narrower than Moody's previous forecast of 3.4%.”

Moody’s said that it expects the government to continue to pursue its fiscal consolidation strategy. Meanwhile, tax compliance is likely to improve gradually as the South African Revenue Agency (SARS) rebuilds some of its intuitional capacity after a period of deterioration in terms of human capital and public standing, according to the agency. Moody’s noted that this would provide a degree of fiscal flexibility to manage risks associated with rising social demands amid inflationary pressures and a very high and rising unemployment rate. Moody’s said that an upgrade would likely follow if South Africa demonstrated significant progress towards alleviating structural constraints on growth, strengthening the prospects of a decline in government debt. Firm signs that the rehabilitation of the energy sector is underway would also be a key marker, pointing to higher growth and lower contingent liability risks from the SOEs sector.

While we expect commodity prices to continue to underpin the revenue side of the fiscal equation, as is the case for many African countries, fiscal risks remain elevated due to years of fiscal mismanagement and wasteful spending.

As external headwinds continue to blow, downside risks to Morocco’s economic outlook have intensified. Against this backdrop, the African Development Bank has pledged to extend a $1bn loan to Morocco to help underpin the country’s economic recovery. According to a statement from the bank, the funds will be directed to the development of projects in key areas of the economy, including water, agriculture, social inclusion, human development and infrastructure.

The funding from the African Development Bank will help shelter the country from the negative impact of droughts and support agriculture programmes to improve food security. The war in Ukraine has impacted food security in Morocco, with the country dependent on Russia and Ukraine for a sizeable portion of its agriculture imports. The Ukraine crisis has affected the supply and prices of fertilisers, a key component of the agribusiness sector.

Although external pressures have compounded pressure on Morocco’s economy, the country has received overwhelming financial support from the international community. Recall that the EBRD launched a €163mn Green Economic Financing Facility last week in the country. Moreover, the World Bank also loaned Morocco $180mn two weeks ago to assist its agriculture sector, which is currently facing its worst drought in decades. Note that Morocco’s agriculture accounts for roughly 14% of the economy and employs almost 40% of the country’s workforce.