The May US Jobs report today will carry added focus as it will be eyed for any signs that recession concerns have started to impact hiring. The US housing market has come under pressure amid rising mortgage rates, and there is concern that the cost of living could start to affect the labour market as cooling demand forces businesses to reduce employment. That said, the next report may be a bit early to show this as the latest services PMI report showed that companies raised employment levels at the fastest pace in a year, and thus a solid jobs number could be on the cards. Beyond this, risks exist that job growth moderates in the coming months as demand slows in some of the most interest-rate sensitive sectors of the economy, such as housing and construction. It may also be a result of ongoing rotation in consumer demand from goods to services, which would reduce the need for jobs in sectors such as transportation and warehousing.

Angola: As the August presidential elections draw closer, Angola’s main opposition party has said that it plans to curtail the powers of the president and clamp down on corruption if it wins. The National Union for the Total Liberation of Angola intends to introduce a new law that requires the president to be directly elected to ensure that they can be held accountable. Note, under the current system, the leader of the party that wins the most votes becomes the president. The August polls will be the first test of President Lourenco’s popularity since he took over in 2017.

Gambia: Gambia’s central bank yesterday raised its benchmark interest by 100bps to 11%. In the statement accompanying the rate deci-sion, the central bank said that price pressures persist with a significant increase in inflation, driven by a surge in food costs. Furthermore, risks to the outlook are tilted to the upside on the back of rising global food prices, upward adjustments in energy prices, structural challeng-es at the Gambia port, and some exchange-rate-passthrough. Regarding economic growth, the central bank said that while the outlook is “favorable,” the downside risks are high and uncertain, including the war in Russia, Covid-19, and the impact of weather conditions on agri-culture.

Kenya: The African Development Bank (AfDB) is set to grant Kenya loans worth KES 19.8bn ($170mn) this year for budgetary support and agriculture to help its economy recover from the effects of the coronavirus pandemic and the war in Ukraine. According to an official from the AfDB, KES 11.66bn ($100m) would go towards budget support to help steer the economy back on track, while the other $70mn will be for fertilizer and seeds since the war in Ukraine has negatively affected the agri-based economy. Although the loans would add to Kenya’s recent uptake of debt for budget support, the African lender downplayed the risk of default. Recall a Treasury report recently showed that Kenya borrowed nine new loans between January and April, totalling KES 137.93bn, to finance projects.

South Africa: SA has finally signed off on its first emergency power projects that will start the journey of easing some of the pressure off Eskom to allow the power utility to manage the maintenance of its fleet better and raise the amount of available power. Although the pro-jects would only add a fraction of what is needed, it is a step in the right direction and would set the stage for similar efforts in the coming years. Although these projects will need to be paid for through higher electricity prices down the line, that is preferable to constant load shedding.

Zimbabwe: Finance and Economic Development Secretary George Guvamantanga yesterday said that Zimbabwe is no longer considering seeking the cancellation of its debt arrears that it owes to multilateral lenders. The Highly Indebted Poor Countries facility was one of the several options that Treasury had considered to expunge $13bn of debt and gain access to credit lines from global lenders. According to Guvamatanga, the government is looking at alternative strategies that do not involve HIPC, and that a regional bank has been identified to help. Guvamantanga provided no further details.

Ugandan Shilling bulls regained control yesterday as the currency halted its recent losing streak to close on the front foot, supported by the Bank of Uganda’s (BoU) first rate hike since October 2018. The BoU hiked the benchmark policy rate by 100bps to 7.5% to counter infla-tionary pressures and support the weakening currency. The hike unwinds some of the 250bps points of easing announced since 2020 to prop up the economy ravaged by the coronavirus pandemic. The Ugandan Shilling (UGX) gained over 1.5% against the USD and was ranked as Africa’s best performing currency among those tracked by Bloomberg on Thursday.

While the rate hike will support the UGX, BoU Deputy Governor Michael Atingi-Ego warned that the currency remains vulnerable to offshore investors divesting. Note that the UGX has lost almost 6% since the beginning of May, and according to Atingi-Ego, the depreciation is a re-sult of strong hard currency demand from foreign investors mulling selling their local assets as global financial conditions tighten with the Federal Reserve and other DM central banks hiking rates. Atingi-Ego was quoted as saying, “Following the recent increases in the policy rate by the Fed and other central banks in advanced economies, we see that some of these portfolio players are now considering whether to leave the country or not. As a result, they have been buying significant amounts of forex from the market in preparation for the decision that they want to take, so that has been exerting pressure in the FX market.” In addition to portfolio outflows, the UGX has been undercut by dollar demand from fuel importers and importers in the manufacturing sector.

It is worth noting that the sharp weakening in the UGX in recent weeks has prompted the central bank to repeatedly soak up excess hard currency demand and slow the depreciation. While the rate hike will provide further support in the week ahead, we expect the broader bear-ish bias to remain as the fundamental backdrop remains unchanged. Note that the UGX has lost almost 5% against the USD on a year-to-date basis. 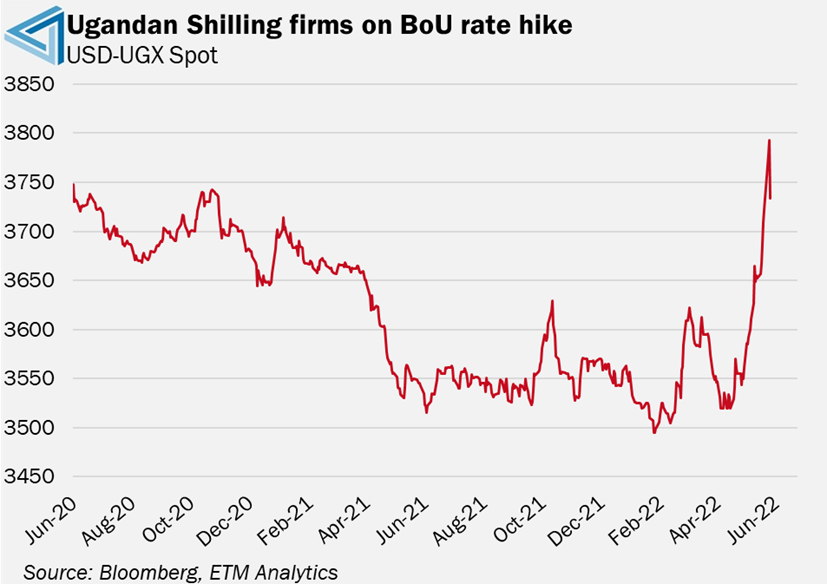 Uganda's central bank has taken direction from central banks around the globe and the South African Reserve Bank and hiked rates to keep a handle on inflationary pressures. With inflation surging to 6.3% last month, the central bank raised interest rates by 100bp to take the key rate up to 7.5% from 6.5%. Deputy Governor Michael Atingi-Ego said that "These downside risks are dampening consumer confidence, heightening exchange rate volatility, and prolonging weak growth in private sector credit," in reference to the supply chain issues, geopolitical conflicts and economic uncertainty spurring on higher inflation. Uganda has now joined the chorus of central banks worldwide that have collectively sought to rein in inflation and prevent any sustained rise in second-round inflation effects.

In Nigeria, the tax authority has warned state governments that have not paid taxes that it will block them from accessing domestic and international capital markets if they fail to pay up. This is a tougher stance aimed at ensuring the local governments collect their withholding and VAT deductions from payments made to contractors and other service providers. The obvious reason behind the effort is to shore up government tax revenues that have taken a hit due to weaker global economic conditions amid rising headwinds related to broad-based inflation.

Out of Kenya, lawmakers have created a committee to look into matters of public debt, according to the rules procedure passed by the National Assembly on Thursday. "The panel will decide the terms against which the government can borrow, including the debt ceiling" according to the rules. This is a constructive step to ensuring greater accountability and control over the issuing of state guarantees and helps determine the country's debt servicing and management strategy. From a bond market perspective, this should be seen as supportive and helpful.

Finally, Kenya has welcomed a renewed push by African ministers of finance, backed by the UN Economic Commission for Africa, to allow rich countries to extend their debt-service relief for regional countries to help their economies recover from Covid-19 curbs.

Oil prices rebounded strongly yesterday as the much anticipated OPEC+ meeting disappointed those looking for the cartel to step in and ramp up production to stabilise the market. Brent touched lows of $112.45 per barrel yesterday before the meeting, but pared those losses and then some to rally back towards $117.50 per barrel. The alliance of oil producers agreed to a roughly 50% extra increase in production for July and August, meaning that, in theory, output will rise by 648k barrels per day for those two months. However, the reality looks very different as the extra output was spread across members according to each one's current production quota. This means that countries that have been struggling to meet their quotas already will continue to do so, but by a larger margin. Those that have spare capacity, such as Saudi Arabia and the UAE, meanwhile, will maintain that capacity.

The deal also does not change what output will be towards the end of the year. It merely brings some of it forward. Therefore, with Russia's production likely to decline due to sanctions and refining capacity still relatively constrained, the market will remain tight and prices will re-main supported. Most major institutions have kept their forecasts for Brent at the end of the year between $120 and $125 per barrel. We expect oil to average slightly less than that through H2, as the global economy slows and demand weakens.

For African producers, the new target quotas are:

As noted above, however, it is very unlikely that we will see these quotas reached over the coming months, given that in some instances, the last few months have seen increases of less than 10% of what was expected.

It should be noted as well that the deal does not change what total output will be towards the end of the year. It merely brings some of it forward. Therefore, with Russia's production likely to decline due to sanctions and refining capacity still relatively constrained, the market will remain tight and prices will remain supported. Most major institutions have kept their forecasts for Brent at the end of the year between $120 and $125 per barrel. We expect oil to average slightly less than that through H2, as the global economy slows and demand weakens.