Mid-term elections are not yet finalised, but the outcome is not the massive red wave of support the earlier polls had predicted. A massive shift towards the Republicans has not materialised, and policy changes are likely to be less significant. With the House appearing to go towards the Republicans, the White House will find pushing through certain bills a lot more difficult, and this will curtail the government’s spending efforts, but not to the same degree as first feared. The implications for the Fed are largely unchanged, implying that the Fed will remain active in reining in inflation.

Ethiopia: In a bid to provide food for its people after the worst drought in four decades and a civil war that has curbed farm production, Ethiopia is seeking International Monetary Fund financing. According to the lender, “Ethiopian authorities have indicated an interest in accessing the IMF’s food shock window.” The lender did not, however, provide any further details. The World Food Programme has noted that more than 20mn Ethiopians, including people who fled their homes because of conflict in the North Tigray region, do not have enough to eat. Meanwhile, as a result of severe drought across several countries, compounded by the war in Ukraine, the IMF estimates that at least 123mn in Africa, 12% of the region’s population, will be unable to meet their minimum food needs, 28mn more than just two years ago.

Egypt: As Qatar moves closer to a deal to acquire government holdings in some of Egypt’s major firms, the sovereign wealth fund has deposited $1bn with the Egyptian Central Bank. Reports quoting sources close to the matter said that the Qatar Investment Authority (QIA) transferred the funds amid discussions over it acquiring state-held stakes in Egyptian companies. Due diligence on the assets and finalizing a deal may take time, so the QIA made the deposit to help Egypt shore up its finances. The deposit will be a welcome boost for Egypt, which is urgently seeking to plug its external funding gap.

Africa: Unless significant investment is made in climate adaptation, Christian Aid, in a new study, has warned that global warming could slash Africa’s economic growth by two-thirds by the end of the century. According to the study, current climate policies will likely see temperatures exceed the pre-industrial average by 2.7C, curbing African growth rates 20% by 2050 and 64% by 2100. According to the study, even a 1.5C rise in temperatures would reduce growth rates by 34% by the century’s end.

Mauritius: The Bank of Mauritius reported on its website that it had sold $100mn in the domestic foreign exchange market as an intervention to help contain inflation. The bank added that it “stands ready to intervene on the market as and when required.” Note that last week, the central bank raised its borrowing costs by the biggest margin since introducing the repo rate in 2006 and signaled more rate hikes if inflation is not reined in.

Namibia: At the ongoing COP27 summit, Namibia has secured over EUR 540mn ($544mn) in climate finance from the Dutch government and the European Investment Bank. The Dutch grant is from infrastructure funding vehicle Invest International, while the facility from the European Investment Bank is to build green hydrogen and renewable energy projects in Namibia. According to President Hage Geingob, the funds represent the largest amount of concessionary finance to combat the effects of global warming that Namibia has secured to date. Namibia aims to produce green hydrogen and position itself as a renewable energy hub in Africa.

Uganda: Uganda’s Minister of State for Energy has said that Uganda will form a state-owned electricity distributor to take over when Umeme Ltd’s concession expires in March 2025 to reduce power tariffs by cutting out the intermediary. The minister added that the government will work on a payout for Umeme under a buyout clause ahead of the expiry. The planned Uganda National Electricity Co. will also assume generation responsibilities when the 20-year contract ends.

Angola: The Bank of Angola has indicated that it expects its international reserves, which are at their lowest level in at least 11 years, after adjusting how it calculates the data to remain stable. Angola’s reserves fell to $13.46bn in October, the lowest level since at least December 2011, according to Bloomberg data. The bank said it changed the reserve calculation methodology in January, “adopting a more conservative option. The international reserves no longer consider the balances of national treasury accounts held with the central bank and any swap operations.” The bank added that it has no plans to build its reserves as it has a “big enough buffer to cover short-term pressures.” The current level of reserves equates to 7.3 months of import cover.

Kenya’s foreign exchange reserves remained under pressure in the week ending November 4 amid surging demand for dollars by importers and a continued sell-off in the shilling. Specifically, Kenya’s foreign exchange reserves fell to $7.21bn from $7.29bn in the week prior. The current level of reserves equates to 4.04 months of import cover and barely meets the Central Bank of Kenya’s (CBK) statutory requirement of at least four months of import cover. 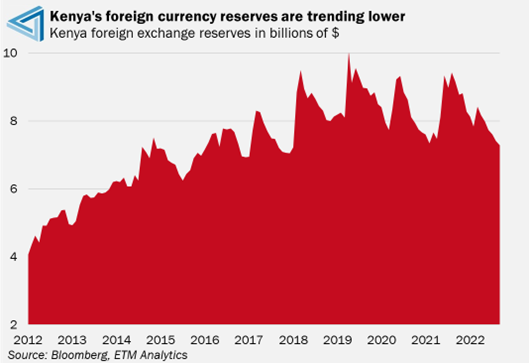 Kenya’s foreign exchange reserves and the import cover ratio have come under pressure this year partly due to continued CBK intervention in the FX market to slow the rate of depreciation of the shilling. The shilling has weakened due to heightened dollar demand and limited inflows. Kenya’s foreign exchange inflows have been impacted by tighter global financial conditions, which have led to a rotation out of the country’s stock market and the negative impact of the war in Ukraine. Persistent drought conditions have also weighed on the agri sector and, in turn, exports.

At the start of the year, the import cover stood at 5.36 months and the International Monetary Fund, in its latest Sub-Saharan economic outlook report, forecasts the cover ratio to drop below four months by the end of 2022. While IMF funding, once approved, might alleviate some foreign currency shortage pressures, risks for Kenya’s foreign exchange reserves and import cover are tilted to the downside.

While the KES remains under pressure, the rally in Kenyan Eurobonds gained momentum on Wednesday amid signs that the government is looking to rein in its budget shortfall. Treasury Secretary Njuguna Ndungu said in an emailed statement on Wednesday afternoon that the Finance Ministry plans to deliver a supplementary budget to cut its budget deficit. Ndungu added that Treasury has “restrained emerging expenditure pressures but also safeguarded against contracting economic activity.”

The comments from Ndungu came less than a day after the International Monetary Fund agreed on a staff level to provide Kenya with a new fiscal support program worth $433mn. Treasury Secretary Ndungu noted that Kenya had made significant progress on fiscal adjustments needed to address debt vulnerabilities and met all agreed performance targets under an IMF program by the end of June. 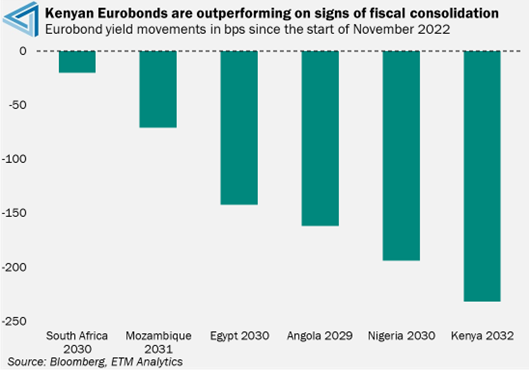 While fiscal risks in Kenya remain significant, the developments this week have helped ease fiscal concerns, providing a meaningful boost to investor sentiment. Against the backdrop of an improved fiscal outlook and signs of a potential pivot in global monetary policy, Kenya’s 2027 Eurobond yield has shed more than 160bps this week to close Wednesday’s session at 10.68%, while the longer-dated 2032 has fallen by 232bps to 11.38%, according to Bloomberg data.

Data published on Wednesday showed that inflation pressures in Ghana intensified in October. Specifically, headline inflation in Ghana accelerated to 40.4% y/y in October from 37.2% y/y in September. The October inflation print came in above consensus expectations for a less pronounced increase to 39.5%. The main drivers of inflation were, once again, fuel and food prices. 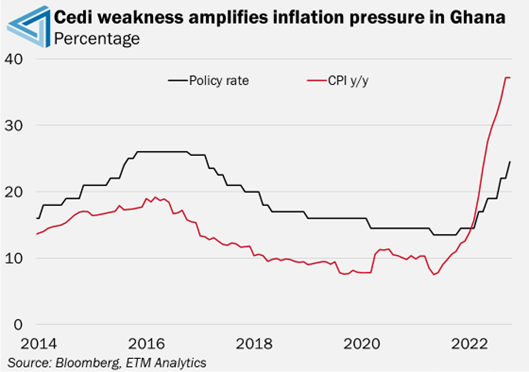 Currency weakness has played a significant role in the surge in inflation this year. For context, the cedi has depreciated by 57% against the USD since the start of the year, making the cost of imports significantly more expensive. Note that headline inflation is quadruple the top of the central bank’s inflation target range of 6% to 10%.

The latest inflation figure adds to bets that the Bank of Ghana may have to deliver an outsized rate hike at its Monetary Policy Committee meeting on the 28th of November. Despite raising rates by 1000bps this year, it is clear that the central bank needs to tighten policy further to prevent the inflation crisis from worsening. Stabilising the cedi will also be a priority for the central bank given its impact on inflation and inflation expectations.