While the bullish momentum in the USD stagnated over the past two days, the greenback is back on the front foot this morning. The Trade-weighted USD Index gapped higher this morning, supported by hawkish comments from the Fed overnight. Following the stronger than expected US CPI print on Wednesday, Fed speaker Mary Daly said that the most likely posture for the upcoming July 27 FOMC meeting is a 75bps hike while adding that a 100bps hike in July is possible. Daly’s comments were accompanied by hawkish remarks from Mester and Bostic, who also suggested that a 100bps hike could be on the cards. The comments overnight have fueled bets that the Fed is more likely than not to raise interest rates by 100bps later this month. With the market now pricing in the risk of a more aggressive shift from the Fed, it is not surprising to note that the USD strength is broad-based, with the entire G10 FX complex trading in the red this morning. Emerging market currencies are also broadly weaker, with the losses being led by CEE currencies.

Egypt: In its quarterly review,  the Egyptian fuel pricing committee raised domestic fuel prices by EGP0.50 for 80-octane, 92 octane petrol, and diesel, while 95-octane petrol was raised by EGP1.00. Prices of 80-octane, 92-octane, and 95-octane petrol were raised to EGP8 ($0.4244), EGP9.25 ($0.4907), and EGP10.75 ($0.5703) per litre, while the diesel price reached EGP7.25 per litre. While inflation slowed in June, the increase in fuel prices and an unfavourable external backdrop for the Egyptian pound pose further upside risks in the coming months.

Nigeria: As a surge in diesel prices to run generators prompts companies to switch to renewable power sources, solar providers in Nigeria are seeking to raise additional funds to expand. With diesel prices having soared 181% in Nigeria, solar providers are seeing increasing installations this year. Most firms in Nigeria had previously relied heavily on generators to run everything from factories to offices as the national grid is unable to supply enough electricity. Poor maintenance and insufficient investment in the transmission network have resulted in only about a third of the country's installed capacity being dispatched by the grid daily, a fraction of what is needed. The unstable power supply has detracted from Nigeria's growth potential.

Ivory Coast: To combat inflation, Ivory Coast has sanctioned more than 2000 traders over contempt of basic commodity prices. According to PM  Patrick Achi, "Since the outbreak of the Russian-Ukrainian war, approximately 35,000 controls have been carried out. It is true, we realised that there are more than 2,000 cases of price non-compliance that we have found, and therefore fraud, which have been sanctioned." Around 87mn CFA francs (about $133,371) in fines were paid by those sanctioned. Achi added that these controls will be "strengthened and intensified" in rural areas. The government in March temporarily halted exports of key basic commodities and fixed price levels for others amid the country's struggle to halt the rising prices of goods and growing fears that inflating prices could trigger a general uprising.

Tanzania: The latest monthly data from the Bank of Tanzania (BoT) showed that Tanzania's current account balance for the year ended May 2022 recorded another deficit of $3.71bn compared to a deficit of $1.71 during the year ended May 2021. The deficit was attributed to higher imports relative to exports. Imports of goods and services rose to $13.76bn in the year ending May 2022, primarily due to the increase in intermediate goods, especially white petroleum products and industrial supplies. Imports of oil surged to $2.33bn from $1.35bn on account of both import volume and price effects. Meanwhile, exports of goods and services increased to $10.83bn during the period under review from $8.62bn, driven by non-traditional exports and services receipts. Gold exports which account for about 37.9% of goods exports, declined to $2.7bn from $3.01bn. Overall a persisting current account deficit is likely to detract further from the Tanzanian shilling, which is down by over 1% on YTD against the USD.

Zambia: As part of measures to combat surging fuel costs, Zambia and Tanzania plan to build a new diesel pipeline connecting the port of Dar es Salaam with the copper mining town of Solwezi in Zambia. According to Energy Minister Peter Kapala, the project worth around $1.5bn is to be built in three stages, and a discussion on the financing mechanism is in the final stages, with a tender set to be announced soon.

Ghana: Following a week-long visit to Ghana, the IMF said it would engage Ghanaian authorities in the coming weeks to formulate an enhanced domestic program that could be supported by the IMF lending arrangement. The IMF, in a statement, added that initial discussions on a comprehensive reform package to restore macroeconomic stability and anchor debt were held. Moreover, progress was made in assessing the economic situation and identifying policy priorities in the near term.

African currencies have broadly come under pressure this year. On a year-to-date basis,  14 out of 22 African currencies tracked by Bloomberg are in the red. A combination of domestic and external factors such as the impact of the war in Ukraine on current account and budget balances, tightening global financial conditions, and, more recently, recessionary fears triggering a rotation from risky assets into safe-haven assets such as the dollar have all weighed on emerging and frontier market currencies. 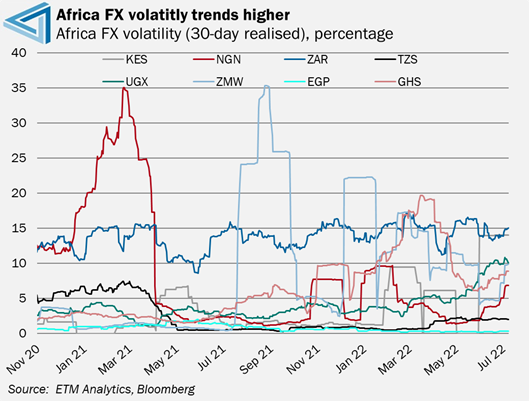 Against this backdrop, it is worth noting that volatility in the Africa FX basket has broadly trended higher when looking at 30-day historical volatility. Volatility in countries such as Ghana, Nigeria, and Uganda has picked up. The Ghanaian cedi has been Africa’s worst performing currency on a year-to-date basis as a challenging fiscal backdrop and an inability to access international capital markets weighs.

With the war in Ukraine persisting and the global financial conditions set to tighten further, given that inflation is proving to be stickier than expected, especially in the US, volatility in African FX is expected to remain elevated. As the supply of dollars to the global financial system continues to slow, there is less hot money to be diverted to riskier emerging and frontier market assets. 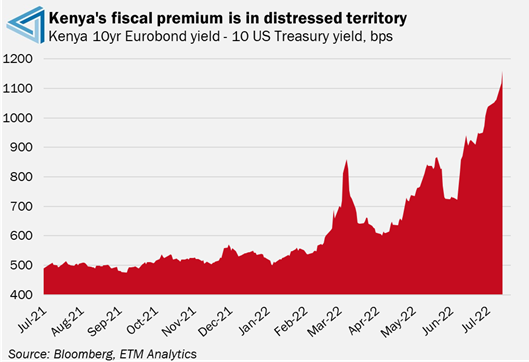 This comes on the back of rising political uncertainty ahead of the elections. A key theme in the run-up to the election has been debt restructuring and the reduction of the country’s debt servicing costs, which have surged in recent months as global interest rates rise. Major lenders, including the IMF, have flagged the need for fiscal consolidation as the country’s debt pile balloons. Kenya also opted to cancel a planned $1bn Eurobond issuance last month due to “unfavourable conditions.”

The sharp rise in Kenyan Eurobonds and the sustained depreciation in the shilling is reflective of the deterioration in investor sentiment toward Kenyan assets as fiscal fears surge. For context, Kenya’s 2024 Eurobond yield has risen almost 5-fold since the start of the year to sit at 20.62% at yesterday’s close. At these levels, Kenyan Eurobonds are trading in distressed territory. Kenyan credit default swaps have also blown out.

Ahead of next month’s presidential election, which will continue to take centre stage, investors will also be keeping a close eye on the delayed financing from the IMF. The IMF is scheduled to review Kenya’s request for additional funding on July 18. The funds will play a crucial part in bridging the budget shortfall.

Data released on Wednesday showed that inflation pressures in Ghana continue to build. Headline inflation in Ghana accelerated to 29.8% y/y in June from 27.6% y/y in May. Inflation in Ghana has soared to record highs over the last few months. With inflation at such high levels, there is a high possibility that the central bank is going to feel the pressure to increase its interest rates again. Recall that the Bank of Ghana has already hiked rates by 550bps since November. 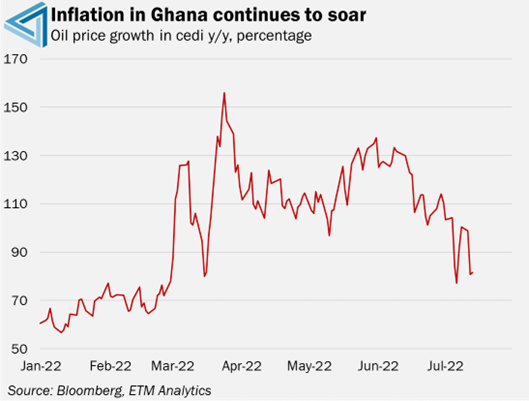 The report revealed that inflation pressures are broad-based. That said, the main drivers of inflation have been transport, household equipment and maintenance, housing, water, electricity and gas.

When looking at oil prices, we can see that prices denominated in Ghanaian cedi terms are more than 80% higher than last year. This explains why transport costs are the biggest driver of inflation within the country. These high prices are being driven by high international oil prices, as well as cedi depreciation, which has increased the cost of importing goods such as oil.

Going forward, it is unlikely that inflation will slow significantly in the months ahead. Investor sentiment toward Ghana has deteriorated markedly in recent months amid mounting fiscal fears. This, together with the deterioration in global risk appetite and tighter financial conditions, is weighing heavily on Ghanaian assets, particularly the cedi. Therefore, inflation pressures are expected to remain robust in the months ahead