6 May 2022
Published by
ETM Analytics

The dollar regained its shine post the FOMC fall yesterday. The thought process driving price action yesterday centred around the Fed still being ahead of all other developed market central banks in its tightening of monetary policy and thus the dollar at these extreme levels is still justified. Equally, we have the US10yr global bond benchmark holding clear of 3.00%, hitting its highest level since Nov 2018 on the back of inflationary fears and tighter monetary policy expectations. Both of these factors are short term gold negative and thus it was not surprising to see the yellow metal under pressure yesterday. This morning we have bullion consolidating around the $1875.00/oz mark awaiting the next round of US data namely US Non-Farm Payrolls.

The industrial metals complex is currently mulling over the global growth conundrum and whether or not the Fed is raising rates aggressively this year, coupled with the lockdowns in China have the ability to unseat the demand side of the equation over the short to medium term. As a result, the 3m LME copper benchmark is on track to record its fifth weekly fall with the contract changing hands at $9475.00/tonne as we head into the start of the EU trading session.

Benin: In an extensive interview, Finance Minister Romuald Wadagni said that Benin has delayed plans to issue its second EUR 500mn ($591mn) social bond after experiencing volatile global markets and concluding a new deal with the International Monetary Fund. According to Wadagni, "even if the market conditions change in the coming weeks or months, we may not go for EUR 500mn. We may not go at all, or we might go for a smaller amount." Africa's first-ever issuer of a social bond plans to come to the market every year until 2030, raising money for education and healthcare.

Gabon: Bloomberg reported that DR Congo plans to issue Eurobonds linked to oil warrants to refinance its outstanding debt to commodity traders Glencore and Trafigura. The deal, expected to launch later this month, is structured as a "debt-neutral" transaction, meaning it will be solely used to refinance about $1.4bn of the oil traders' loans and won't impact the nation's debt load. The planned offering comes after oil prices surged more than 40% this year as the war in Ukraine disrupted flows. For Congo, which is currently servicing its external debt using crude, linking the debt to oil warrants will enable the sovereign to hedge its external payments against the cycle of crude price.

Kenya: In an opinion poll conducted in late April by Nairobi-based Tifa Research, Deputy President William Ruto maintained his status as the front runner to win the presidential election in August. Ruto had the support of 39% of 2033 respondents surveyed, up from 38% in February, while 32% said they would support Odinga, up from 27%. Meanwhile, 16% were undecided, and 12% declined to express a preference. To be president, one needs to win more than 50% of the national vote and at least a quarter of the ballots cast in the half of Kenya’s 47 counties. Tifa noted that the outcome of the election remains “highly uncertain,” given so many Kenyans are still undecided about their eventual presidential choice or even if they will, in fact, vote.

Kenya: The Kenyan economy recorded a notable rebound in growth in 2021. Specifically, the economy grew at the fastest pace in 11 years, with GDP accelerating to 7.5% following a contraction of 0.3% as a result of the coronavirus pandemic in 2020. All the sectors in the economy registered positive growth with the exception of the agricultural sector, which contracted 0.2% owing to poor rainfall. The notable rebound in economic growth is, however, unlikely to be sustained this year amid foreign and domestic risks. The war in Ukraine and coronavirus shutdowns in China are likely to weigh on capital inflows and demand for Kenya exports, while rising fuel costs, supply shocks, persistent drought, and a weak currency will dent growth and fan inflation.

Uganda: Acting Director in the Finance Ministry Moses Kaggwa yesterday said that Uganda would not introduce fuel subsidies even after pump prices surged following supply disruptions partly to the war in Ukraine. According to Kaggwa, subsidies and lowering the fuel tax would cost the government much-need revenue and increase the need to borrow. Gasoline prices in Uganda have jumped 19% this year to an average of UGX 5300 per litre. Meanwhile, demand for fuel has picked up following the reopening of the economy in January. Kaggwa added that the government will allow a competitive environment and only intervene if dealers get “abnormal margins.”

Zimbabwe: Zimbabwe is once again set to fail to make good on its pledge to white farmers evicted from their land over 20 years ago. The country is likely to miss a payment of $1.75bn to the farmers. Under the Global Compensation Deed, signed in 2020, the farmers would receive a total of $3.5bn for the evictions in 2000, which decimated agricultural production. 50% of the money was supposed to have been paid out within the first year, followed by four $437.5mn annual instalments. The president of the commercial farmers union said that farmers were still working with the government to raise the funds while a local paper reported that the government could not secure funds from development partners and international financiers.

The Angolan Kwanza has strengthened by over 27% since the start of 2022, making it Africa’s best-performing currency against the dollar so far this year. The AOA’s gains have coincided with the elevated price of oil, which accounts for more than 90% of Angola’s export revenue. Those gains are five times more than that of the next best-performing currency, the Guinean Franc (+5.37%). 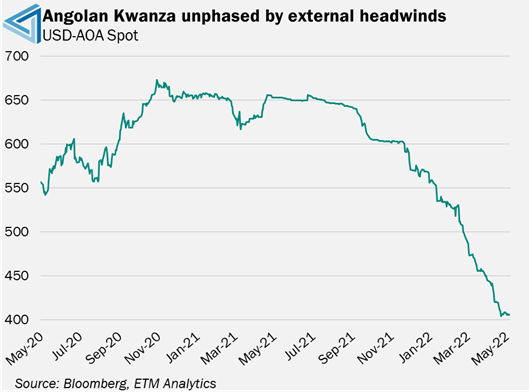 An improving outlook for the oil-exporting economy that exited an economic recession that it had been mired in since 2016 in 2021, the liberalisation of the foreign exchange regime, elevated international reserves, prudent monetary policy, improving fiscal dynamics, and economic reforms such as the privatisation and diversification agendas are factors that have also supported the Kwanza. Since June 2021, the Kwanza has recorded monthly gains against the USD and is currently in the green and outperforming its peers at the start of May.

Whether the impressive rally in Kwanza persists in the coming months remains to be seen, given it is now deeply overvalued. According to in-house indicators, the Kwanza is overvalued by around 28%, suggesting the rally may be overdone. Aside from oil price volatility, headwinds in the coming months include the August election, as it could pose a risk to policy continuity. Moreover, elections could encourage populist measures, and we could see the government spend more to appease the population, especially in the face of a united opposition. This would potentially undo some of the positive fiscal developments thus far. Meanwhile, although elevated, the reserves accumulation appears weaker than expected, given the oil windfall.

Fixed Income: Kenya makes another about-turn on its plan to issue Eurobonds

Kenya is back in the spotlight this morning after Treasury Secretary Ukur Yatani said that the government would follow through with its initial plans to issue $1bn in Eurobonds before the end of the 2021-22 financial year, which concludes at the end of next month. Yatani’s comments come just days after National Treasury said in a document, which has now been removed from its website, that it is considering shelving its plan to sell Eurobonds due to the marked increase in global lending rates. 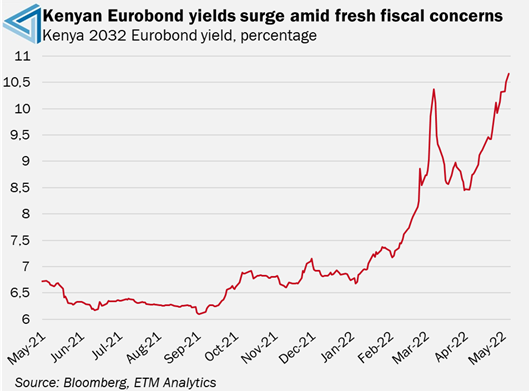 Treasury Secretary Yatani said, “we are issuing because it's part of the financing plan for the current fiscal year.” Kenya is hard-pressed for funds at the moment, with the country facing an estimated budget deficit equivalent to around 8.1% of GDP. The marked budget shortfalls come on the back of explicit spending as the government continues to inject funds into farming, housing, manufacturing and health care projects in the wake of aggressive fiscal spending to cushion the blow of the pandemic on the economy.

Recall that Kenya issued $1bn in 12yr Eurobonds in 2021 to plug part of its budget deficit. Demand at the auction was robust, with bids coming in at an impressive $4.4bn. However, global lending conditions have since deteriorated sharply on the back of the hawkish pivot from major developed market central banks, with the likes of the Federal Reserve and the Bank of England hiking rates once again this week. This comes on the back of global risk-off conditions amid lingering inflation concerns, the war in Ukraine and mounting fears over China’s economic outlook due to its covid zero policy.

The timing of Kenya’s planned Eurobond is questionable, with a number of domestic headwinds, including the August presidential elections, increasing the risk of fiscal distress and widening deficits, which are weighing on investor sentiment. Moreover, the back and forth surrounding the Eurobond issuance will detract from investor sentiment. Against this backdrop, if the government does go through with its planned Eurobond issuance, it will have to accept an issuance at a higher cost, further pushing up debt servicing costs.

While progress has been slow, Zambia is making small strides toward restructuring its $17.3bn in foreign debt, a move required for the country to secure a much-needed program with the International Monetary Fund. Recall that China, the single largest creditor of Zambia’s foreign currency debt, in April signalled that it would join the debt restructuring committee, injecting fresh blood into a stagnated process. 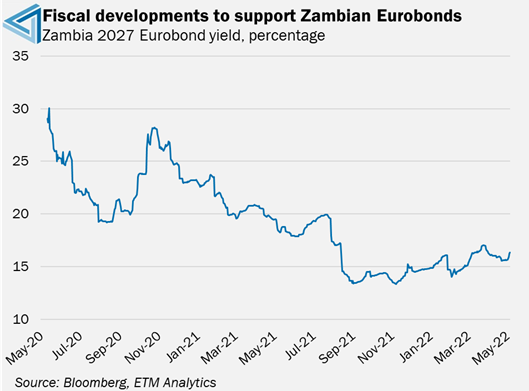 Finance Minister Siitumbeko Musokotwane said it makes sense for the country’s largest creditor to play a leading part in the debt restructuring process. Musokotwane said on Thursday that “they are willing to participate as co-chair, and we welcome that because it will improve the chances of resolution - them being the biggest single creditors.” Zambia’s debt restructuring forms part of the G20’s Common Framework designed to help provide reprieve for heavily indebted countries in the wake of the pandemic.

China has been the biggest stumbling block in the debt restructuring process. However, with Beijing now on board, the light at the end of the tunnel for Zambia appears to be nearing. Despite the delays, the Finance Minister said Zambia remains on track to complete restructuring talks by the end of next month and win final approval for the loan from the IMF’s board. Bloomberg reported that France and South Africa have also offered to co-chair Zambia’s creditor's committee, which will negotiate a restructuring of the debt within the confines of a debt sustainability analysis findings that the World Bank and IMF completed earlier this year.

Under the Common Framework, Zambia will then ask private creditors to negotiate comparable terms for their debts. While Zambian bonds remained under pressure on Thursday, this was primarily due to gloomy external conditions as the global risk-off trade continued. Once risk appetite returns, we expect a recovery in Zambian bonds following the positive developments on the fiscal front this week.