Tuesday saw the release of inflation data out of Uganda and Kenya. Inflation in Kenya came in above expectations in August. Specifically, CPI came in came in at 6.6% y/y in August, unchanged from an upwardly revised July figure. On a monthly basis, consumer prices rose by 0.2% in August. The Kenya National Bureau of Statistics said in the report that inflation was driven by food and non-alcoholic beverages, transport and housing, water, electricity, gas and other fuels in August. 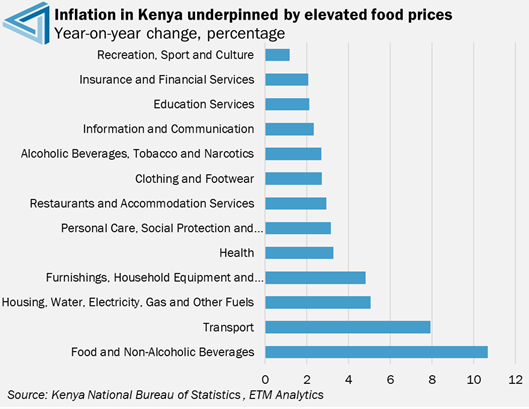 While inflation continues to trend higher, the Central Bank of Kenya is expected to leave rates on hold as the country continues to grapple with the COVID-19 pandemic. Judging by recent commentary, the central bank is more concerned about the suboptimal economic activity than inflation at the moment. At its last MPC meeting, the bank said that inflation expectations remained anchored within the target range, adding that the economy continued to operate below its potential level, suggesting that the current accommodative monetary policy stance remains appropriate. 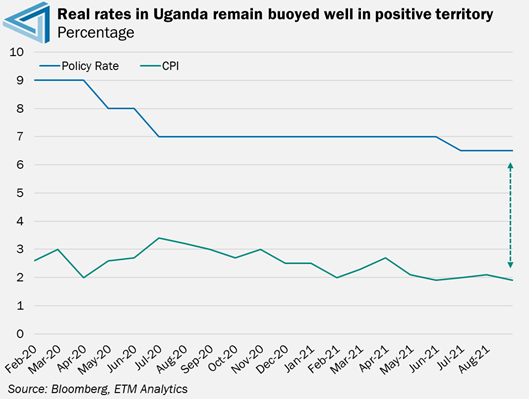 With inflation anchored and the economy still reeling from the impact of the shock of the COVID-19 pandemic, policymakers are expected to keep monetary policy accommodative in the months ahead. It must be noted that Uganda’s low inflation rate is propping up the country’s real interest rate, which is amongst the highest in Africa. Uganda’s high positive real rate will provide support for domestic assets and is partly responsible for the outperformance of the Ugandan Shilling.

With the two inflation prints out the way, the focus shifts to S&P’s sovereign credit rating update for Kenya on Friday evening. Recall that in March, S&P downgraded Kenya’s sovereign rating to B from B+ as fiscal dynamics continued to deteriorate. S&P said that the stable outlook balances the expectation of an economic recovery and the availability of supportive foreign donor facilities against the risk of rising fiscal and external pressures. The agency noted that it would lower the credit rating further if Kenya's path to economic recovery and efforts to curb its fiscal deficits prove inadequate, pushing domestic or external debt up significantly. S&P said that it could also lower the ratings if Kenya enters into debt restructuring arrangements, with adverse credit implications for commercial (non-official) creditors.

After two decades of military occupation, the US ended its chaotic withdrawal from Afghanistan to the cheer of the Taliban, who have now claimed "complete independence". The Biden administration did itself no favours given how this was handled and will count heavily against the Democrats in the next elections. It was a misstep with consequences not just in the region but also in international and US politics. The Taliban now appears to be stronger than ever, and the more extreme Islamic presence in the region will be something the West will want to keep a close eye on, especially if it allows ISIS to rebuild a stronghold.

With this exit now behind us, the focus will shift to the economy and the data scheduled for release. Data released on Tuesday morning showed that China’s manufacturing PMI fell to 50.1 in August from 50.4 in July, while non-manufacturing PMI fell to 47.5, the lowest reading since early 2020. The PMI data suggests that momentum has weakened, and the boost to global growth could become a drag. On balance, it is another risk factor central banks around the world will be paying attention to that could add some caution to any decisions to normalise monetary policy through the coming quarters.

Risk sentiment remains favourable in the second trading session of the week, with last week's speech by Fed Chair Powell confirming that the central bank will continue to support the markets over the coming months. European equities are stronger, while the USD continues to retreat. This expectation for continued support has seen market participants shrug off weaker than expected data out of China. With this, the focus is now shifting to the US jobs report out later this week, which could drive market sentiment in the early stages of September.

On the fiscal front, Kenya’s Treasury forecasts GDP growth to slow 5.9% in the 2022/23 financial year due to the uncertainty associated with the general election. Treasury added that GDP would grow at 6.2% in the 2021/22 FY and then recover to 6.3% in the 2025/26 FY. According to Treasury, "to strengthen the economic recovery, the budget for the financial year 2022/2023 and the medium term will focus on resource mobilization and reduction on non-core expenditures in order to reduce the fiscal deficit and ensure debt sustainability."

While Kenya’s economic recovery is expected to be robust, which should prop up government revenue in the coming months, fiscal risks remain tilted to the upside. The escalation in fiscal concerns in Kenya is reflected by the steepening in the local currency bond curve this year. For context, the spread between Kenya’s 2029 local currency bond yield and the 2024 bond yield has widened by more than 60bps since the start of the year to sit at 234bps at the time of writing. In addition to the steepening in the bond curve, Kenya’s 5yr USD credit default swap has legged higher this month. Specifically, Kenya’s 5yr USD CDS has risen by more than 40bps in August to sit 324bps, levels not seen since January. 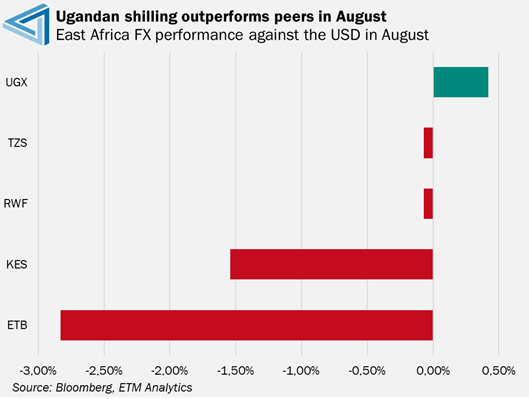 In the currency market, the recent slide in the dollar and improvement in global risk appetite has provided a boost to emerging market currencies which are a sea of green this week. Africa currencies are relatively mixed this week. Regionally, the gains are being led by the Ugandan Shilling (UGX), which has gained 0.29% against the dollar at the time of writing. The losses on the week meanwhile are being led by the Kenyan Shilling (KES), with the USD-KES hovering just below the 110.00 mark at the time of writing. Note that the pair hasn’t sustained a break above this key level of resistance since February. End of month dollar demand could see the pair break the key resistance level. 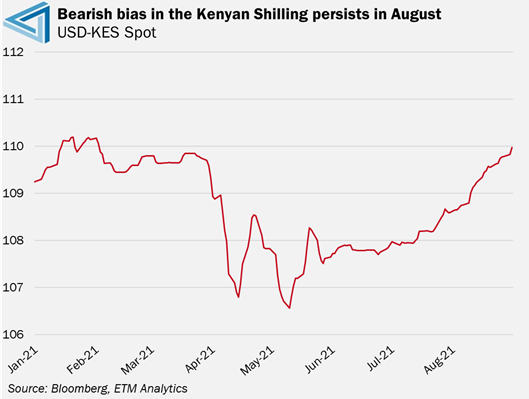 On a monthly basis, the UGX has been the best performing East African currency, gaining 0.42% against the greenback. The rest of the East African currency basket has performed relatively poorly this month. The worst of the lot has been the Ethiopian Birr (ETB), which has depreciated by -2.83%. The KES has also shed some significant ground this month, with the currency losing 1.54% at the time of writing. The Rwandan Franc (RWF) and the Tanzanian Shilling (TZS) meanwhile have both lost -0.07% against the USD in August.