Mid-week, the USD finds itself on the defensive. Most investors anticipate that the Fed will soon scale back on the size of the rate hikes, and some acknowledgement will be given to the peak and reversal in inflation. Monetary dynamics have changed considerably in the US, which will alleviate inflationary pressures. The worst is behind us, and the Fed will be mindful of pushing the tightening too quickly and unnecessarily damaging the economy. A global slowdown is already underway, and reports of layoffs are becoming more regular, especially among tech companies. The cycle has turned, and the data will guide the Fed on how to act, but investors will be super-sensitive to any guidance confirming that the Fed will slow its tightening rate and prioritising growth a little more.

Kenya: Following the Central Bank of Nigeria rate decision yesterday, where policymakers delivered another outsized rate hike, the focus shifts to the Central Bank of Kenya and Bank of Zambia today. With inflation continuing to accelerate and risks tilted to the upside following the removal of fuel subsidies, the increase in exercise duties, and a depreciating shilling, the Central Bank of Kenya is expected to raise rates for the second straight meeting today. Bloomberg consensus expectations are for a 50bp rate hike, which would take the benchmark interest rate to 8.75%. As was the case with Nigeria, the forward guidance will be vital for financial markets.

Zambia: The Bank of Zambia will deliver its final rate verdict for the year today. While central banks continue to tighten monetary policy aggressively amid record-high inflation, the BoZ kept its main policy rate unchanged for the third straight meeting in August, citing easing price pressures. A firmer Zambian kwacha has helped limit price pressures, and in October, headline inflation slowed to a 4-month low. The slowdown in inflation means that it is still on course to average 11.4% this year, as forecast by the BoZ. The bank also sees single-digit inflation over the next two years and expects inflation to fall within the target range of 6-8% by the first quarter of 2024. Against a backdrop of contained inflation, risks exist that BoZ policymakers may opt to leave the policy rate unchanged today. An unchanged decision would be the longest holding streak since 2013.

Kenya: The latest data from the central bank showed that Kenya's import cover fell to a seven-year low, almost breaching a required buffer amid dwindling reserves. Specifically, reserves held by the CBK stood at $7.19bn in the week ending November 17, sufficient to pay for 4.03 months of imports. That is marginally higher than the minimum four months it's required to maintain to cushion the financial system against short-term shocks. Aside from CBK intervention in the FX market to try to slow the rate of depreciation of the shilling, the reserves have also been depleted due to repayments to bilateral and commercial lenders.

Mozambique: The International Monetary Fund has completed the first review under the Extended Credit Facility (ECF) arrangement for Mozambique, providing the country with access to SDR 45.44mn ($59.26mn). The latest amount brings the total disbursements under the ECF arrangement to SDR 113.6MN ($150mn). According to the lender, all end-of-June 2022 program performance criteria, indicative targets, and structural benchmarks were met. Meanwhile, the monetary policy stance and proactive tightening since early 2021 are deemed appropriate to address higher-than-expected inflation.

Nigeria: Nigeria's Debt Management Office yesterday said that Nigeria had begun the sale of a NGN 100bn ($226.6mn) domestic Sukuk to fund the construction and rehabilitation of key road projects. The 10-year Islamic bond, structured as a lease, will yield a 15.64% rental rate per annum. The bond subscription is backed by the government, with the offer lapsing by November 29.

International Monetary Fund: Malawi became the first low-income country to receive financing from the IMF under a new tool intended to help countries cope with global food price shocks. According to the lender,  Malawi will get $88.3mn to "address urgent balance of payments needs and mitigate the impact of the food shock.". Note that the IMF introduced the food-shock window in September for countries that have urgent balance-of-payment needs due to food insecurity, a sharp increase in their food import bill, or a shock to their cereal exports. The facility is available for a year. Separately, the IMF reached a staff-level deal with South Sudan to provide the country with $112.7mn in emergency financing, which needs to be approved by IMF's board. According to the lender, "this emergency financing under the new Food Shock Window will help South Sudan address food insecurity, support social spending, and boost international reserves."

Forex: Ghanaian cedi is steady, but risks remain tilted to the downside

The Ghanaian cedi was relatively stable yesterday, with support for the currency stemming from hard currency demand being matched by supply and the central bank offering support. The recent directive by the Bank of Ghana, instructing banks to withdraw foreign exchange support to customers for the importation of certain non-critical goods, has provided some additional support. The directive is the latest measure taken by the central bank to reduce the high demand for US dollars in order to try to slow the rate of depreciation of the cedi. 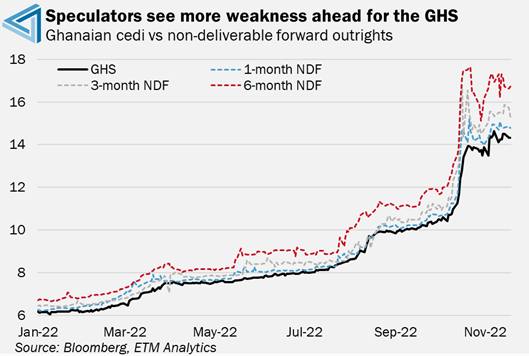 While the move by the BoG to preserve its dwindling dollar reserves is positive, risks exist that it could constrain foreign exchange liquidity and worsen its demand and supply disparity which will, in turn, exacerbate the pressure on the local currency. As mentioned in previous commentary, Ghana's fundamental backdrop remains fragile, and securing an IMF deal remains key. An IMF deal would help improve Ghana's external and fiscal positions, restoring investor sentiment and easing pressure on the cedi.

Notwithstanding the recent stabilization, the outlook for the cedi remains bleak, with the currency derivatives market pricing in more depreciation. While the non-deliverable forward tenors have moderated somewhat, the six-month tenor in pricing cedi depreciation of around 17%. 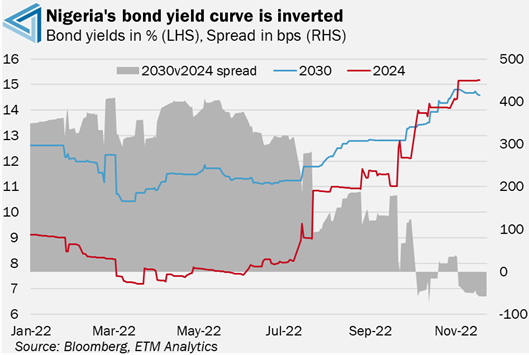 Of the 11 Monetary Policy Committee members that were present at the meeting, 9 voted in favour of a 100ps hike, while 2 preferred a smaller 50bps hike. While the pace of monetary policy tightening slowed from the September meeting, where policymakers hiked rates by 150bps, the rate hike was still larger than some economists had expected, and the policy statement was relatively hawkish, which would've helped ease inflation expectations, particularly as supply-side cost pressures ease and the global growth outlook deteriorates.

With the election just three months away and the potential for an increased fiscal premium being baked into domestic assets against the backdrop of mounting pressures on the Central Bank of Nigeria to devalue the naira, the outsized rate hike is seen as a prudent monetary policy move. Against the backdrop of the aggressive policy tightening this year, there has been a considerable flattening in the Nigerian local currency bond curve. For context, the spread between the 2030 yield and the 2024 yield has compressed by more than 400bps this year to sit at -58bps, according to Bloomberg data. With the Central Bank of Nigeria expected to remain hawkish in the near term, the curve is expected to remain inverted for now.

Macroeconomic: Speculators turn net bearish on the USD for the first time since July 2021

Given the importance of the USD in FX markets and its impact on inflation across Africa, it is worth having a look at the latest speculative positioning on the greenback. The CFTC data for the week ending 15 November shows that the USD net long position fell below the neutral level for the first time since July last year, suggesting that sentiment towards the greenback has finally shifted. Following a weaker-than-expected CPI release and some less hawkish Fedspeakers, the aggressiveness of the US rate hike trajectory has been dialled down and removed a major pillar of support that the US dollar enjoyed for most of 2022.

Even with the recent retreat, the trade-weighted USD Index (the DXY Index) continues to trade at very expensive levels, last seen in the early 1980s. Historically, these levels have been difficult to sustain and there is no reason to believe that this time will be any different. The USD has surged on expectations of higher rates relative to its trading partners and that expectation has now moderated. 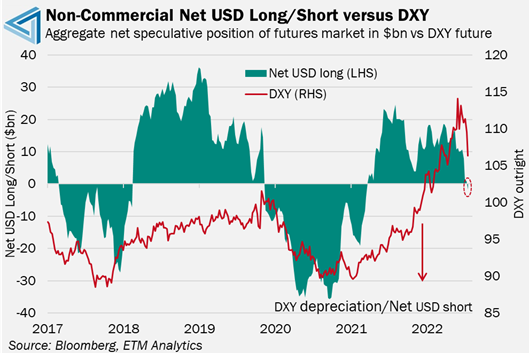 History also shows us that there is significant room to the downside still for the US dollar net position. This catalyst could come from either another soft CPI data releases, any weak labour market data, or further toned-down commentary from key Fedpeakers.

The shift to a net bearish position in the US dollar signals that the currency has likely peaked. It does, however, also mean that for any significant further weakness to materialize, we would need to see quite a major catalyst in order to push speculators to go even more net short.