In the budget statement for FY 19/20 released today, Kenya's Treasury Cabinet Secretary Henry Rotich proposed the removal of Section 33 (B) of the Banking Act, which would essentially repeal the loan rate cap entirely. Rotich said that the rate cap had been introduced to reduce the cost of borrowing and increase access to credit, but had not lived up to expectations. Hence, the Treasury noted that the proposed repeal would address the need to enhance access to credit and minimise the adverse impact of the interest rate cap on credit growth.

The High Court ruling still stands. The High Court of Kenya had earlier ruled that the loan rate cap was unconstitutional, but to avoid disruption in the market, it suspended the effect of the ruling for 12 months (until March 2020). This could allow loan yields to remain subject to the limit of 400bps above the central bank rate of 9% (for a maximum rate of 13%) until March 2020, if no additional amendments are passed prior. The court, however, ruled that the National Assembly was still in its constitutional right to impose an interest rate cap yet. We therefore expect the issue to be debated in Parliament within this period. 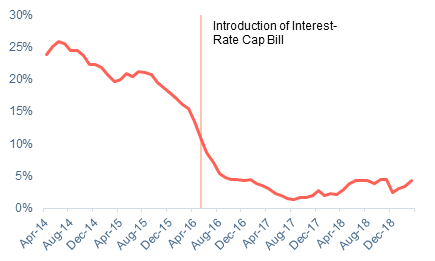 The IMF in its recent Kenya working paper now backs a higher ceiling. A recent working paper issued by the IMF considered the impact of the interest rate cap and determined that it has “led to a collapse of credit to micro, small, and medium enterprises; shrinking of the loan book of the small banks; and reduced financial intermediation.” Furthermore, the IMF has reached a similar conclusion to previous reports by the CBK, that the interest rate cap has led to c0.5% decline in GDP growth. While a higher ceiling on lending rates could help to alleviate some of the squeeze on private sector credit growth, we believe that this space will remain constrained. As we have written in the past, large fiscal deficits result in excess Treasury borrowing in domestic markets that increase yields, effectively crowding out the private sector. While we certainly welcome any proposed amendments to the status quo, they will need to be made in conjunction with additional fiscal consolidation.

Equity Group set to be the biggest gainer from the repeal. In our report Kenya banks: Asset quality, the defining puzzle piece, we ran a scenario analysis on a proposed amendment by a legislator, which provided for a ‘negotiation window’ of up to 600bps above the cap for SMEs and unsecured individuals, implying loan yields of up to 19%. We determined that the sector would record an average 590bps rise in ROE should the amendment be passed as is. Due to its large SME loan book, Equity Group would record the highest uplift in ROE from this (690bps), while DTB would record the lowest, with a mere 350bps rise in ROE.

KCB is still our top pick, with a target price of KES54.00 (ETR of 43%). This is based on: 1) KCB Group’s large retail and corporate market share, boosted by the government’s shareholding in the bank; 2) the increasing contribution of non-interest revenue from alternative channels; 3) its sector-leading net interest margin; and 4) its continued high efficiency, delivering a lower cost/income ratio.