According to new Central Bank of Kenya (CBK) data, total agency banking transaction value in H1 21 grew by 52% yoy to KES3.3bn. This was on the back of a 10% yoy rise in registered mobile money accounts to 67mn and a 23% yoy increase in overall agency transaction numbers.

The growth in overall transaction values tallies with the continued shift to digital transactions that the pandemic has accelerated. The value per transaction increased by 11% yoy to KES3,029, boosted by clients increasingly using agency outlets for transactions.

We expect the growth in transactions carried out through agency outlets to continue through the medium term, resulting in higher revenues for banks. 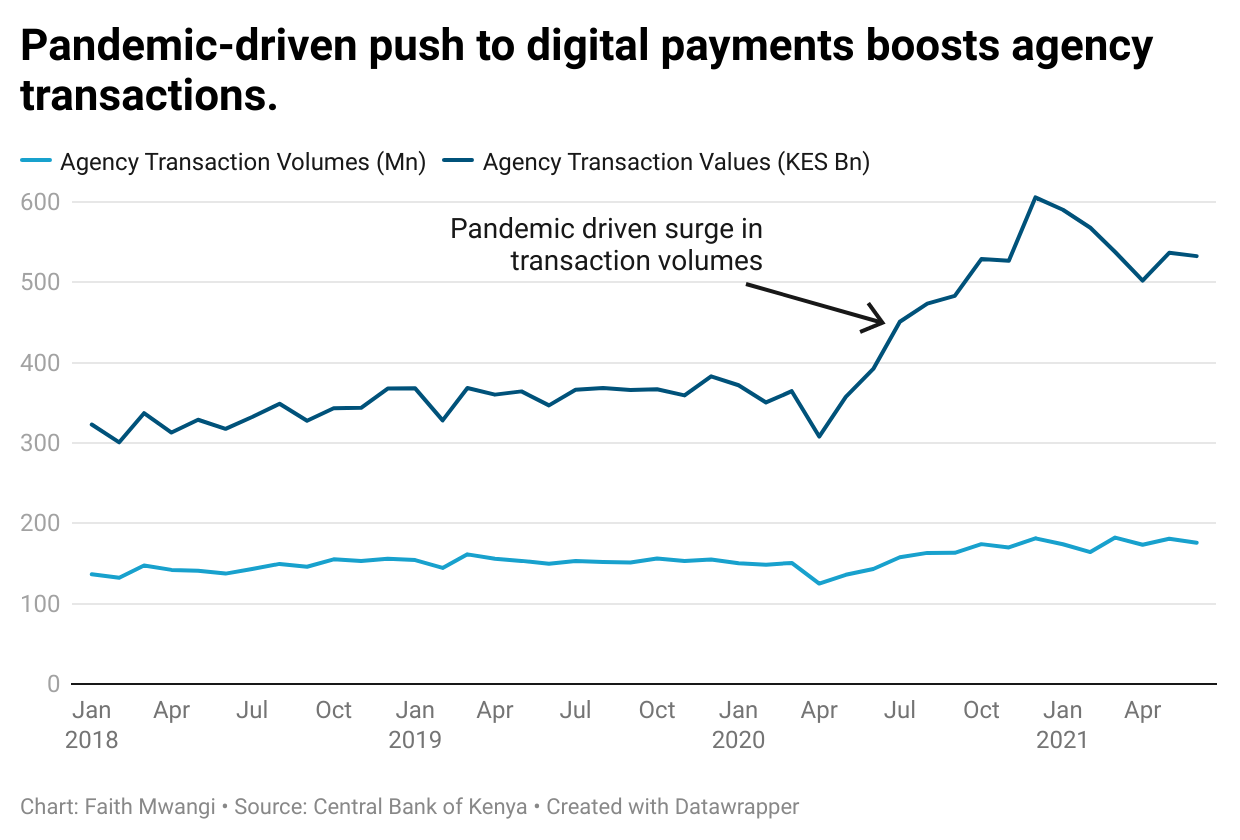 According to the CBK, over 90% of all approved commercial bank agents in Kenya are from three Tier 1 banks – Equity Group, Co-operative Bank and KCB Group. These entities are therefore set to benefit the most from the rise in agency banking transactions, especially in terms of non-interest revenue generated from these outlets.

Among the banks we cover, Equity Group has the largest agency banking network and the highest number of transactions. The bank was the first to start operating agency networks in the country and has managed to maintain its lead. Among the bank's digital platforms, agency outlets handle the second-highest level of transactions in terms of value (mobile banking remains the bank’s top digital channel).

Equity Group generates a higher proportion of its income than any other Kenyan bank from digital channels, with a fee income/total income ratio above 20%. We believe Equity Group will benefit the most from the strong growth in agency banking transactions given its larger-than-peers network and higher transaction volumes. 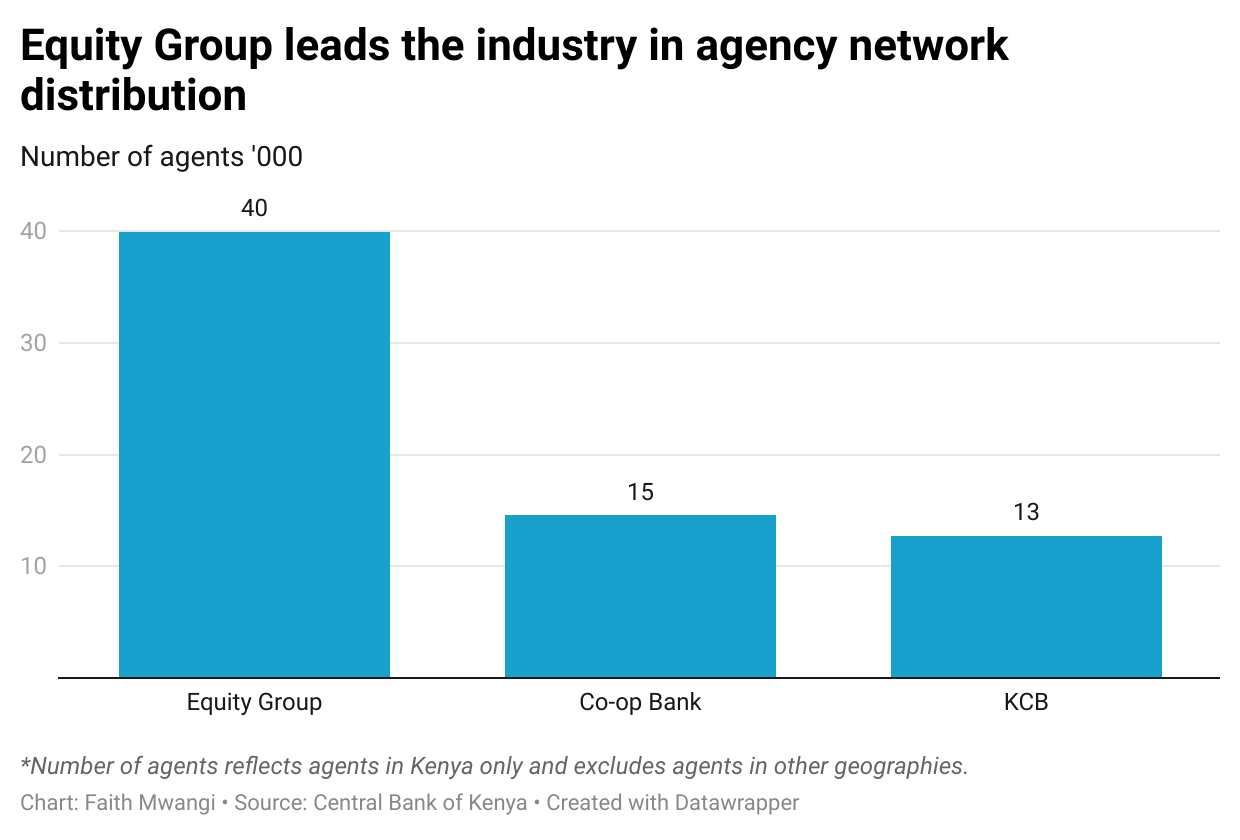 According to company filings, KCB Group recorded revenues of KES566mn from its agency network in FY 20 versus Co-op Bank's KES435mn. The latter's performance is poor considering it has almost the same number of agents as KCB Group. We estimate that KCB Group, on average, generates 32% higher revenue per agent compared with Co-op Bank.

Co-op Bank kicked of its digitisation programme later than Equity Group and KCB Group and, as such, the bank is still playing catch-up on monetising its digital platforms. While this remains a future revenue growth area for the bank, management needs to accelerate the pace of digitisation. However, compared with KCB Group and Equity Group, Co-op Bank's management is far less nimble, and we are concerned its pace of digitisation may continue to fall behind peers.

Future agency banking growth to be cannibalised by mobile platforms

While agency banking platforms have shown strong growth in the recent past boosted by their ability to service a wider range of clients at a lower cost, we do not expect the trajectory to remain as strong going forward. For the three Tier 1 banks (ie Equity Group, Co-op Bank and KCB Group), the services available at agency outlets have, for the most part, been replicated on digital channels (mobile platforms), which are easier for customers to use.

Additionally, the continued integration of e-wallets and bank accounts is also shifting transactions away from agencies to mobile platforms. Although we believe this could affect the overall growth of transactions at agency outlets, banks are trying to move transactions taking place in their physical branches to agency outlets, which will ensure that agency banking remains a core operation. This means growth will slow down, but not decline significantly. Still, we expect mobile platforms to be the digital channel to watch.

Since the introduction of agencies in Kenya, they have primarily functioned as deposit collection and cash disbursement centres. We believe agency banking will primarily be serving these needs going forward, especially as more banks allow clients to use agencies for various payments. For example, school fee payments have, in the recent past, moved away from bank branches to agency outlets.

KCB remains our top pick among the banks we cover

KCB Group remains our top pick in Kenya with a target price of KES54.00. We expect management to improve efficiency at the National Bank of Kenya (NBK) – which it recently acquired – especially in government revenue collection, which is set to deliver higher fee income for the bank.

Management has also been deft at adapting to the ever-changing world of digital channels, which has accelerated both investments and the rollout of appropriate digital products that has contributed to growth in fee and commission income.

One concern that remains is the bank's continued asset quality weakness, although we are aware of management’s shift to a more cautious lending strategy.