Kenya's Supreme Court has unanimously upheld the results of last month’s presidential election, confirming the victory of William Ruto with 50.5% of the vote versus 48.8% for Raila Odinga (a 233,000-vote margin and above the 50%+1 threshold to avoid a runoff). All seven judges voted to reject the challenge launched by Odinga, with Chief Justice Martha Koome saying they found had found “no credible evidence” to support any of the nine claims of fraud made by Odinga’s legal team and describing the challenge as a “wild-goose chase that yielded nothing of value".

Although four of the seven Independent Electoral and Boundaries Commission (IEBC) commissioners distanced themselves from Chairman Wafula Chebukati’s declaration of victory for Ruto, Koome said that they provided no explanation or evidence to explain why they considered the process to be flawed and that the election could not be overturned “on the basis of a last-minute boardroom rupture”. Notably, all four opposing commissioners were appointed last year by outgoing President Kenyatta, who had endorsed Odinga as his preferred successor.

The Supreme Court ruling is final, meaning Ruto will now be sworn in as president on 13 September, ending a protracted period of uncertainty surrounding Kenya’s election. Ruto commended the ruling in a speech in Nairobi, adding that “We are not enemies. Let us unite to make Kenya a nation that everyone will be proud to call home". Kenyatta also urged Kenyans to accept the ruling, adding that “It is my intention to oversee a smooth transition to the next administration".

Most importantly, Odinga himself has expressed his reluctant acceptance of the ruling. In a statement posted on his Twitter, he said “We have always stood for the rule of law and the constitution. In this regard, we respect the opinion of the court although we vehemently disagree with their decision today". He added that “We will be communicating in the near future our plans to continue our struggle for transparency, accountability and democracy".

Odinga’s acceptance of the verdict after his fifth unsuccessful run for the presidency, begrudging as it is, effectively eliminates the looming risk of post-election violence. Indeed, the mood was calm in the Odinga stronghold of Kisumu after the announcement, with business more or less as usual. And with the cost of living on the rise (inflation hit 8.5% yoy in August) and political apathy setting in (voter participation fell to 65% versus 80% in 2017), most Kenyans will be eager to move on.

The ruling also boosts the growing institutional credibility of Kenya’s Supreme Court, which demanded a re-run of the 2017 election in response to Odinga’s petition and, more recently, prevented Kenyatta from going forward with a proposed referendum that was ultimately deemed unconstitutional. With Kenya’s political and judicial institutions continuing to mature, its reputation as a democratic stronghold on the continent will only continue to grow.

Kenya’s eurobonds reacted positively to the news, with the KENINT 6 ⅞ 06/24/2024s and KENINT 8 05/22/2032s both rising by 2.4pts to US$90 and US$76.85, respectively, on a 173bps and 52bps contraction in z-spread at the time of writing. However, spreads are still 134bps and 47bps wide of where they traded in the immediate wake of the election, respectively, suggesting there is some room for further contraction (though the Bloomberg EM Sovereign High Yield Index spread has widened by 65bps over that period, potentially capping the upside). 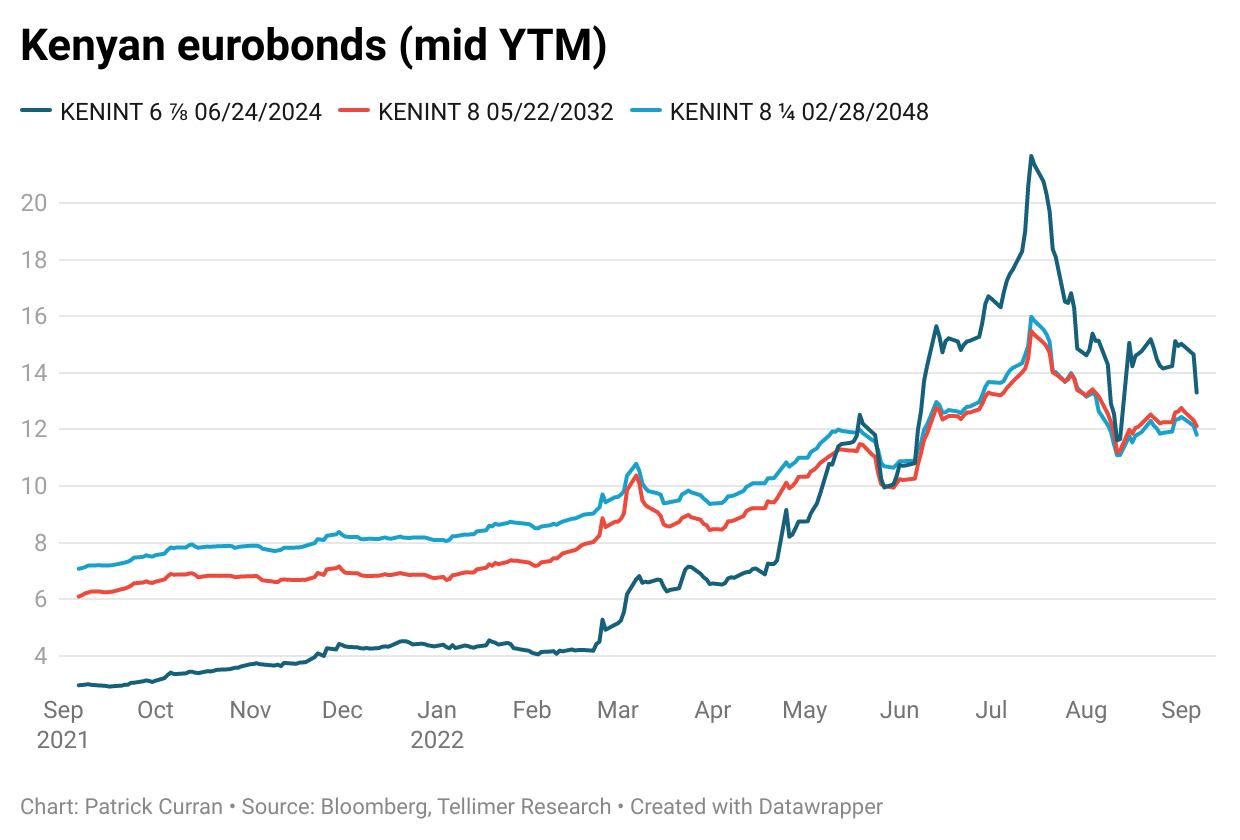 The attention will now shift to the transition of power and the incoming Ruto administration’s response to Kenya’s economic challenges. We have previously unpacked the policy implications of the election at length, and think, on balance, that Ruto is likely the stronger candidate for Kenya’s economy. That said, it will be important to see who he appoints into key economic positions (like the Minister of Finance) and the rhetoric of his administration to the ongoing IMF programme. Its continued commitment will be essential to avoid an unsustainable rise in fiscal and external imbalances.

That said, with the election now in the rearview, we think Kenyan bonds will continue to rally (assuming no changes in broader EM risk sentiment), and maintain our Buy recommendation at US$76.85 (12.12% YTM) at the time of writing on Bloomberg for the KENINT 8 05/22/2032s.

Kenya’s sell-off has created a Buy opportunity, May 2022

Kenya budget: Still on track, but margin for error continues to shrink, June 2021

Kenya budget: Ambitious targets, but can they deliver?, June 2020