Splits within the ruling Jubilee party are ever more glaring, demonstrated in recent days by the disputed change of Senate majority leader and the formal pact with KANU. This matters for three reasons: crisis management, structural reform, and civic cohesion around the 2022 election.

(1) Crisis management – The current crisis is brought about by the coincidence of Covid-19 – which shutters domestic economic activity, throttles tourism (4% of GDP) and puts at risk overseas remittances (3% of GDP) – and locust invasion (agriculture is 35% of GDP). A ruling party pre-occupied with its internal fight over succession is less likely to combat the crisis. At the time of writing, the direct fiscal response amounts to merely 0.4% of GDP, and policy rate cuts year to date are 125bps (leaving a real interest of merely 1.4%).

(2) Structural reform – A divided ruling party impedes the passage of legislation to support President Kenyatta's "Big Four" agenda (improvement in affordable housing, universal healthcare, manufacturing and infrastructure). For a while, Kenya can grow without structural reform: 1) high financial inclusion via mobile technology could drive structurally higher growth compared to developing economies that lack this;2) the easy availability of international capital (particularly in an environment of very low developed market interest rates) could allow Kenya to finance its persistent current account deficit (forecast at 4.5% on average over 2020-21 by the IMF, with c60% total government debt to GDP at the end of 2019); and 3) sufficient liquidity in the local banking system could allow the government to finance its persistent fiscal deficit (forecast at 7.3% on average over 2020-21 by the IMF). However, ultimately without a shift to greater manufacturing (to narrow the trade deficit and drive employment growth) and improve infrastructure (to reduce supply chain bottlenecks) there are limits to how long this economic growth model can last and to how efficiently capital is allocated (the decline in house prices since mid-2018 is a warning sign in this regard).

(3) Civic cohesion around the 2022 election – The ruling party was borne out of the shared interest of its two leaders, President Kenyatta and Vice President Ruto, to defend themselves internationally in the International Criminal Court and domestically from the 2013 electoral challenge of opposition leader, Raila Odinga, particularly in the populous Rift Valley. With those reasons having faded, the political vulnerability at the heart of Kenya – its political divisions along ethnic lines, which date back to how land was redistributed post-1963 independence – risks coming to fore. It was the exploitation of this sensitivity which, in part, led to disruptive and deadly communal violence between Kenyatta's Kikuyu and Ruto's Kalenjin ethnic supporters in the Rift Valley after the 2007 election (when they were on competing election campaigns).

The formal parliamentary cooperation agreement between the ruling Jubilee party and KANU on 8 May is, on the surface, trivial. Jubilee already enjoys an absolute majority, KANU was already voting alongside Jubilee, and KANU has merely 3% of National Assembly (lower house) and 5% of Senate (upper house) members.

The wider context, however, is that this is the latest demonstration of disunity between the two camps bound together in Jubilee:

(1) "Kieleweke": led by President Kenyatta, mainly from the Kikuyu ethnic community, fearful of protecting their interests once Kenyatta reaches his term limit in 2022 and VP Ruto potentially succeeds him after the next election, in favour of outreach to parties outside Jubilee to establish alternative alliances to that with Ruto; and

(2) "Tanga Tanga": led by VP Ruto, mainly from the Kalenjin ethnic community, with expectations that after two terms under President Kenyatta the 2022 election will allow for a handover of power in their favour,

The leader of KANU is Gideon Moi, who is the son of deceased Daniel arap Moi (president from 1978 to 2002) and also an ethnic Kalenjin (ie a potential threat to Ruto's full control of the Kalenjin portion of the vote bank in the populous Rift Valley).

Coincident with the formal pact with KANU, a Ruto loyalist in the positions of Senate majority leader (Murkomen) was replaced with a KANU member (Poghisio). The procedure followed within Jubilee is disputed by Ruto supporters. At a minimum, this will mark another proxy battle between the two camps (the handshake between Kenyatta and opposition leader Odinga, the "Building Bridges Initiative" notionally to establish consensus behind Kenyatta's "Big Four" development agenda but more accurately described as an effort to build new political alliances pre-2022, the use of anti-corruption investigations which resonate with the mass population but are more accurately described as a mechanism to remove members of the government from each others camp). At most, it may act as a catalyst for the party's ultimate formal dissolution. 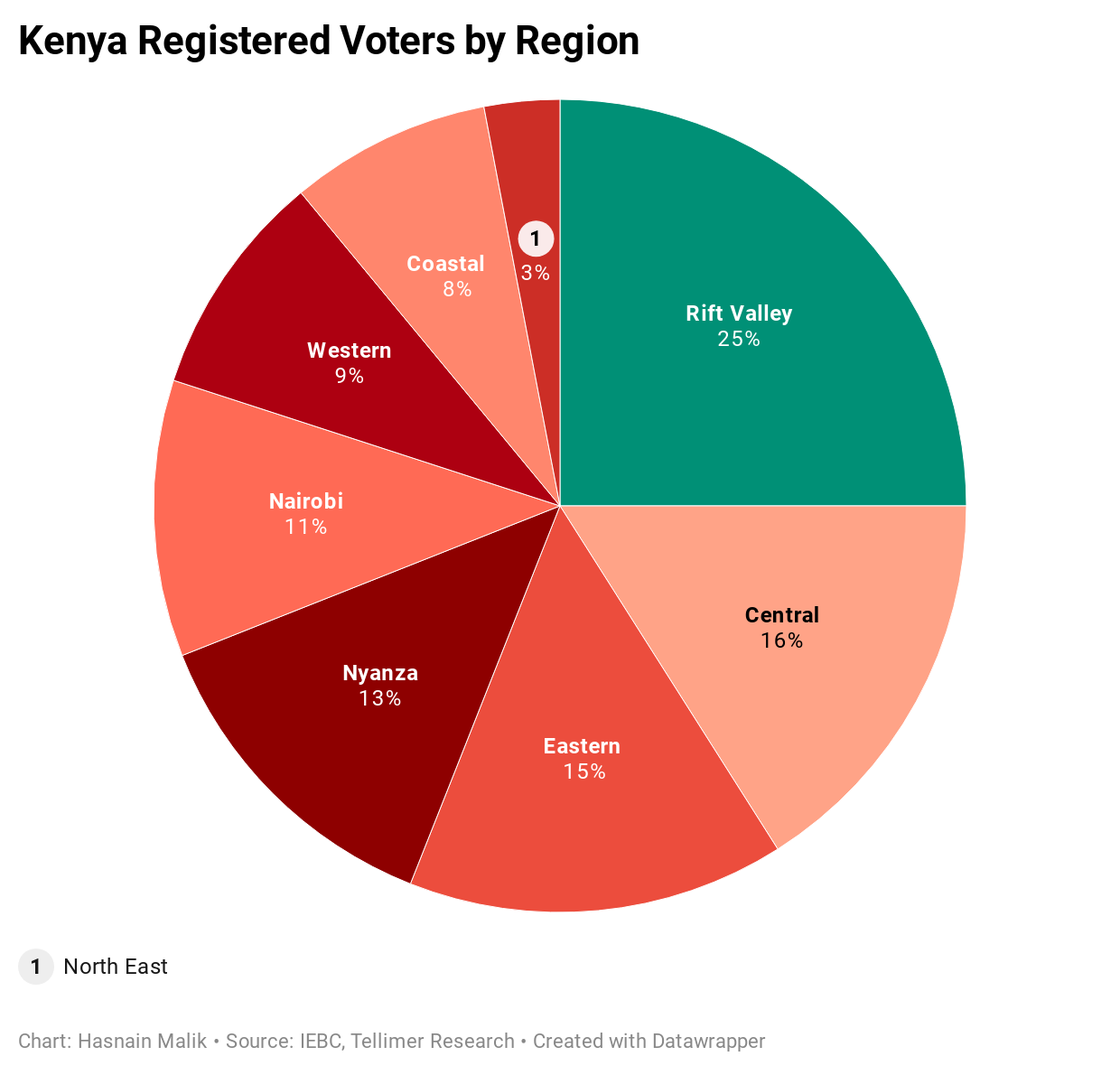 The range of risks evident in Kenya makes us unenthusiastic about the top-down investment case, on a standalone basis. But we acknowledge that for Africa ex-SA funds, there are scant alternatives. Capital is trapped in Nigeria and Zimbabwe, only relatively low macroeconomic growth and corporate returns on equity are available in Morocco, and there is a consensus positive view on Egypt. For those with a broader small emerging and frontier mandate, we see more opportunity in the likes of Pakistan (more structural reform), Philippines (more attractive value versus history), and Vietnam (less risky high growth).

Year to date, Kenya equities, measured by the NSE All-Share index, are down 18%, broadly in line with MSCI Frontier (down 21%). The bigger banks (KCB, Equity) have underperformed mobile telco Safaricom and brewer EABL. 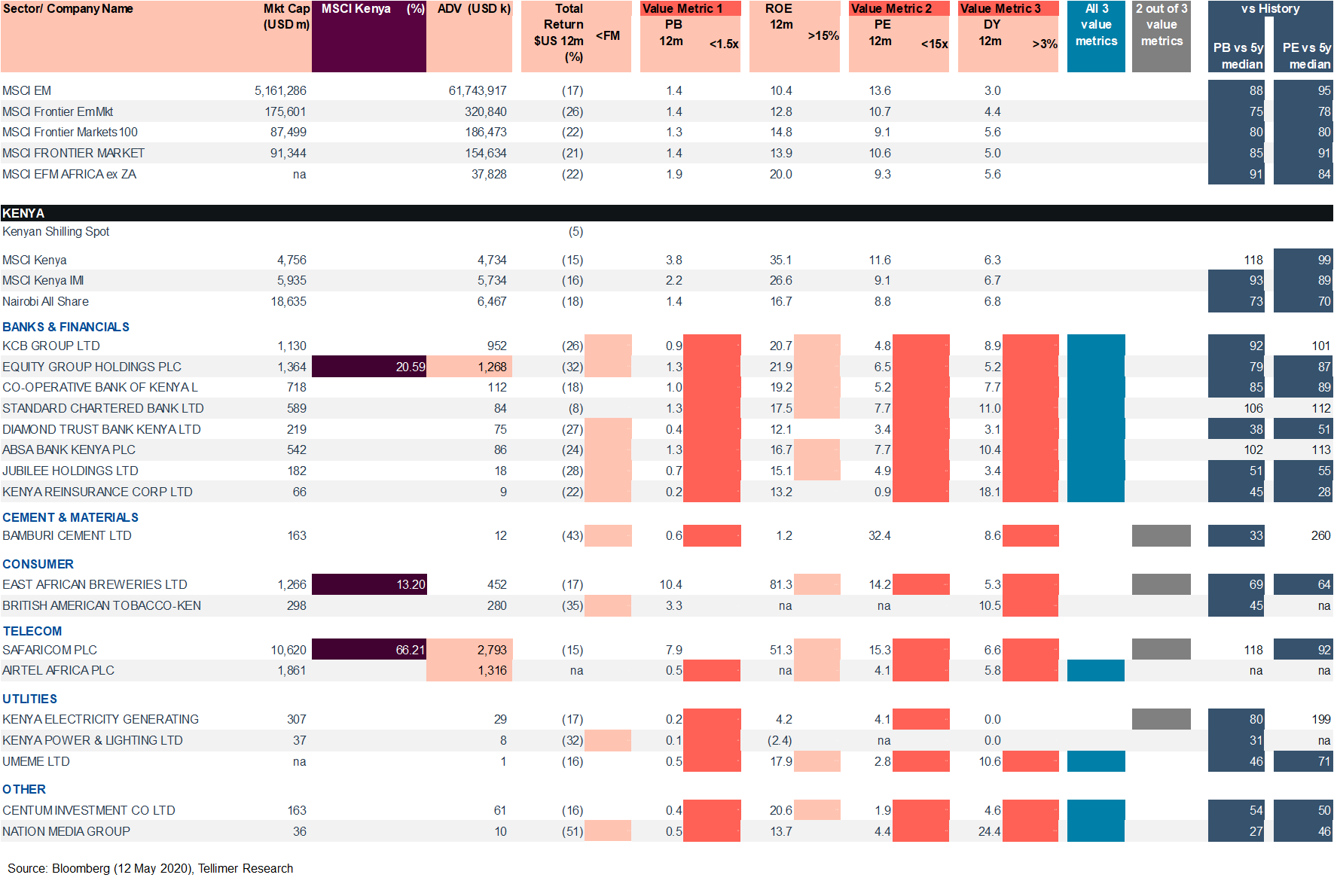 An excel version of this table is available from the author.

Kenya: Al-Shabab attack a reminder of the risks, 6 January 2020

Kenya: Cleaning the house more than raiding the pantry, 21 November 2019