As we start the new week, not enough has changed to raise confidence that the war in Ukraine will be ending other than Ukraine confirming that it is ready to discuss its neutral status. There will be a new round of talks scheduled, and investors will be hoping that they will prove more fruitful than the first round. While Ukraine might consider neutrality, it will not want to relinquish eastern regions in Ukraine in the Donbas, Mariupol or Odesa. There are strong strategic reasons for this.

In the commodity space, oil prices have fallen as we start a new week, with concerns over China’s worsening COVID outbreak driving the market at the moment. The Chinese city of Shanghai has said that it will go under lockdown in order to curb rising infections and conduct mass testing. The city will be locked down in halves, allowing for some economic activity to persist. Nevertheless, the situation suggests that mobility in one of China’s largest cities will be compromised, denting the demand outlook for crude. Further adding to some downside pressure on the market is the fact that Houthi rebels have suggested that they will pause their attacks on Saudi Arabia, which helped drive up prices on Friday after an oil depot was bombed. However, the situation there remains fluid, and we could see attacks resumed at any moment.

Limiting oil’s losses for now, however, is the news that the US has said that reviving the Iran nuclear deal may not happen soon. Iran has requested that the Islamic Revolutionary Guard Corps be removed from a list of terrorist organisations. The US is unlikely to accede to this request, especially given Iran’s and the IRGC’s ties to Russia. Unless Iranian crude is released into the global market soon, the current structural deficit will remain entrenched and potentially widen further, keeping prices extremely elevated.

Ethiopia: Parties involved in the war in Ethiopia have agreed to a conditional truce in the Northern Tigray region. The Tigray People's Liberation Front said it will implement a "cessation of hostilities effective immediately" once it sees evidence that sufficient humanitarian aid is being delivered to the region. The TPLF's statement came hours after the government on Thursday declared a humanitarian truce and said it's making the "maximum effort" to facilitate the free flow of emergency assistance. The tentative agreement is the closest the two sides have come to a cease-fire since the war began. It may serve as a step toward the resumption of humanitarian assistance to people in Tigray and other regions affected by the conflict and a step toward a political process to resolve the conflict.

Ghana: Data from the Ghanaian government showed that the value of mobile-money transactions in the country fell for the second straight month in January, down 13% to GHS 76.2bn ($10.1bn). The declines come after the government said it planned to impose a 1.75% levy on all electronic payments. On Thursday, Finance Minister Ken Ofori-Atta urged lawmakers to approve the so-called e-levy, saying it's key to helping the government meet an ambitious budget-deficit target. Note that mobile money is the fastest-growing source of income for wireless-network operators like MTN.

Zambia: Finance Minister Situmbeko Musokotwane said on Friday that Zambia's creditors are in the next few weeks expected to form a committee to examine the sustainability of the nation's debt and determine the amount of relief they are willing to offer. According to Minister, "we anticipate that the official creditor committee will be formed within the next few weeks, paving the way for the restructuring discussions." Musokotwane added that the talks on Zambia's debt at 120% of GDP are expected to culminate in creditors providing financial assurances to the International Monetary Fund for the approval of a $1.4bn extended credit facility. While the committee would be comprised of bilateral creditors, the Minister said that commercial creditors would also be invited to provide relief to Zambia to ensure burden-sharing. Note that Musokotwane expects an IMF deal by Mid-2022.

Tanzania: Tanzania's Monetary Policy Committee has approved for the Bank of Tanzania to continue implementing accommodative monetary policy for supporting businesses and investment, conditioned on the inflation path in the remainder of the 2021/22 fiscal year. The MPC also noted that while inflation has been rising, it is forecast to remain within the 3-5% target in the near term, supported by adequate food supply and sustained macroeconomic policies. However, the MPC highlighted that upside risks to the inflation outlook include commodity prices, supply chain disruptions and geopolitical tensions in Eastern Europe.

Zambia: As part of measures to cushion the blow against surging prices, Zambia's Minister of Agriculture Permanent Secretary Green Mbozi said the Zambian government has agreed to a local millers' group's request to waive a 15% wheat-import duty and will publish subsidiary legislation soon. Note that Russia's invasion of Ukraine could cause a spike in global hunger as the war increasingly disrupts supplies of wheat and other goods from a region known as one of the world's breadbaskets. Russia's invasion has put at risk exports of wheat, corn, sunflower oil, and other foods from Russia and Ukraine that account for more than 10% of all calories traded globally.

A bearish bias remains entrenched in the Kenyan Shilling (KES) at present, with the currency plunging to a fresh low on Friday. The KES added to its year-to-date drop of 1.43% as energy firms and general importers sought hard currencies for their transactions. The Ukraine war, which has triggered a spike in oil and commodity prices, has piled pressure on import-dependent countries, and Kenya has been no exception. 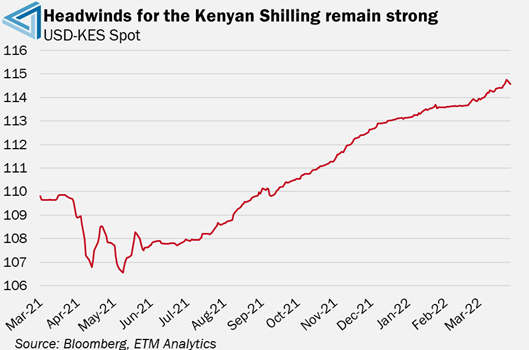 Further downside pressure for the KES is likely to come from provisional data, which showed that Kenya’s current account deficit widened to 5.6% of GDP in February from 4.3% in the comparable period a year earlier. According to the Central Bank of Kenya, the wider deficit reflects a higher import bill, particularly for oil, which more than offset increased receipts from agricultural and services exports and remittances.

Looking to this week and KES weakness is set to persist. In addition to the above-mentioned headwinds, increased dollar demand from companies preparing to pay dividends to their foreign shareholders and slow inflows will weigh, suggesting the KES could close the month on a weaker footing.

Fixed Income: Kenya plans to increase the size of its bond issuance to deepen its debt market

As part of a program supported by the World Bank, the Kenyan government plans to increase the size of its local currency bond issuance to strengthen its domestic bond market. The World Bank said on Friday that the Kenyan government would offer a minimum of KES 50bn of local currency bonds maturing in or less than five years under the Development Policy Operation. The minimum size for longer maturity bonds will be KES 75bn. 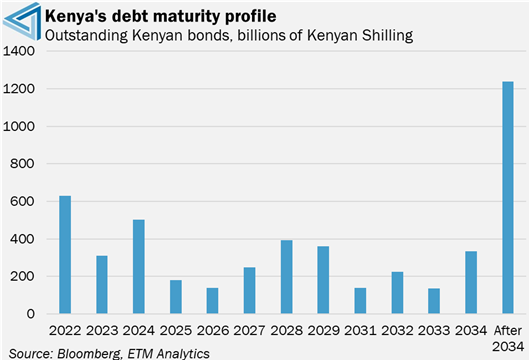 The World Bank said that the debt reforms aim to help the government access longer-term debt at a lower cost, reduce refinancing risks and increase transparency in the market. Moreover, the World Bank said that the measures would also support overall capital market development and deepening, particularly as a higher quality yield curve will provide better price discovery and improved reference pricing as to the long term risk-free rate and cost of capital in Kenya.

As highlighted by the World Bank, Kenya’s government bond yield curve is highly fragmented, and liquidity in the secondary bond market is thin, which increases the cost of financing due to higher liquidity premiums. In conclusion, while the increased issuance size may alarm some investors, the deepening of the bond market should improve lending conditions and help lower financing costs for the government over the medium to longer term.

S&P delivered a credit rating update on Ethiopia on Friday. S&P Global affirmed Ethiopia’s CCC/C long and short term foreign and local currency sovereign credit ratings on Ethiopia on Friday and left the outlook at negative. S&P said in its report that the negative outlook reflects the risk that it could lower the country’s credit rating over the next 12 months due to increasing pressure on the availability of external funding and the potential inclusion of commercial creditors in the government’s debt restructuring plans. 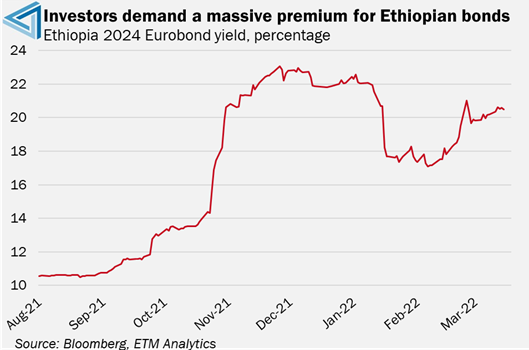 S&P added that downside risks to the country’s credit rating outlook include the potential for a re-escalation of political tensions and reduced multilateral and bilateral financial support, which further strains the country’s debt repayment capacity and already low foreign exchange reserves. The global rating agency noted that these pressures could result in the country being unwilling or unable to service the interest payment on its commercial obligations, including the $33mn Eurobond interest payment that is due on June 11.

The agency said that it would lower the country’s credit rating to selective default should it restructure its debt with commercial creditors, including on domestic debt. On the upside, S&P said that it could revise the outlook to stable if the political situation stabilises through a sustained cease-fire in Tigray, which would allow donor funding to resume and external pressures to subside. Moreover, S&P said that it would upwardly revise the outlook if it became clear that Ethiopia’s commercial obligations would not be included in the upcoming debt restructuring agreement.