Kenya: Locusts already a 1.5% hit to GDP and getting worse 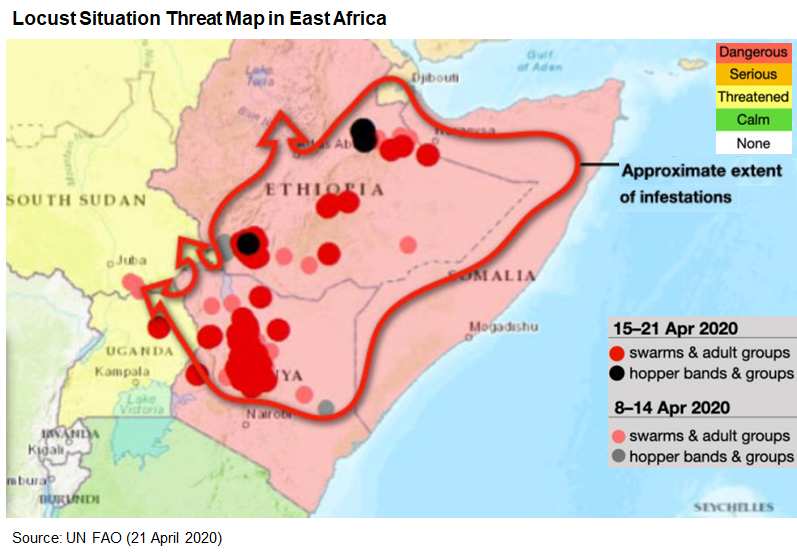 Already a 1.5% hit to GDP in Kenya, even worse in East African neighbours

The World Bank published an estimate on 14 April of the economic damage from locusts (ie damage to livestock assets, livestock output, and staple crop output).

This is likely to expand substantially, in our view, because of the following factors:

(1) The locust threat is intensifying (due to recent heavy rains) as the harvest season approaches (June-July).

(2) The ability to respond is being impaired by Covid-19 (supply of equipment and deployment of personnel).

(3) Agriculture is directly about 35% of GDP and 40% of jobs (ie there is a lot more at stake directly and indirectly as the damage feeds into banking loan quality).

(4) Impaired food supply likely ultimately feeds through to inflation (food is 36% of the consumer price index) and, therefore, also to the ability to respond to Covid-19 economic stress with lower policy rates.

(5) Agricultural exports make up 65% of total exports (ie there is likely to be a second-round effect on the current account and, potentially, on the FX rate).

(6) The economic damage to neighbours such as Uganda, Somalia, South Sudan, Sudan and Ethiopia, which collectively account for 16% of exports, is proportionately even greater. 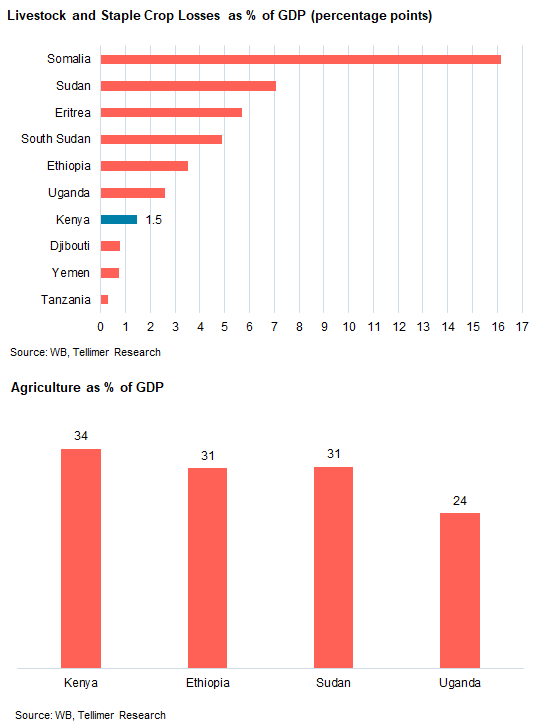 These are the key comments for Kenya from the 21 April update from the FAO.

"The current situation in East Africa remains extremely alarming as more swarms form and mature in northern and central Kenya, southern Ethiopia and probably in Somalia. This represents an unprecedented threat to food security and livelihoods because it coincides with the beginning of the long rains and the planting season."

"Although ground and aerial control operations are in progress, widespread rains that fell in late March will allow the new swarms to mostly stay in place, mature and lay eggs while a few swarms could move from Kenya to Uganda, South Sudan and Ethiopia."

"During May, the eggs will hatch into hopper bands that will form new swarms in late June and July, which coincides with the start of the harvest."

This follows the comment below from the 14 April update.

"In Kenya, farmers have cropped maize, beans, sorghum, barley and millet in recent weeks hoping that a favorable rainy season will allow for abundant growth during late April and May. But with new swarms on the horizon gaining size and strength, experts fear that in Kenya and other areas up to 100% of farmers’ crops could affected."

Equity market has weakened, but not as much as US$ sovereign bond (due to the relative resilience of Safaricom compared to Banks like KCB or Equity) 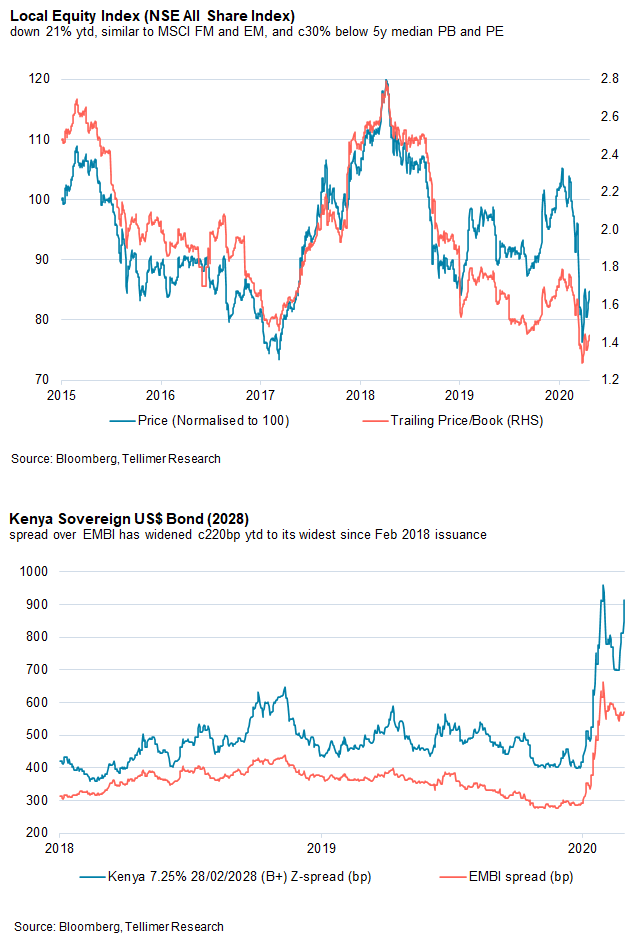 Kenya: Locusts nearing agriculture, not a crisis yet, 13 February 2020