Kenyan eurobonds have sold off this week on 1) headlines that the debt ceiling has been revised from a legal limit of KES9tn to KES10tn and 2) comments from presidential aspirant Raila Odinga that he will aggressively pursue debt relief negotiations if he is elected. 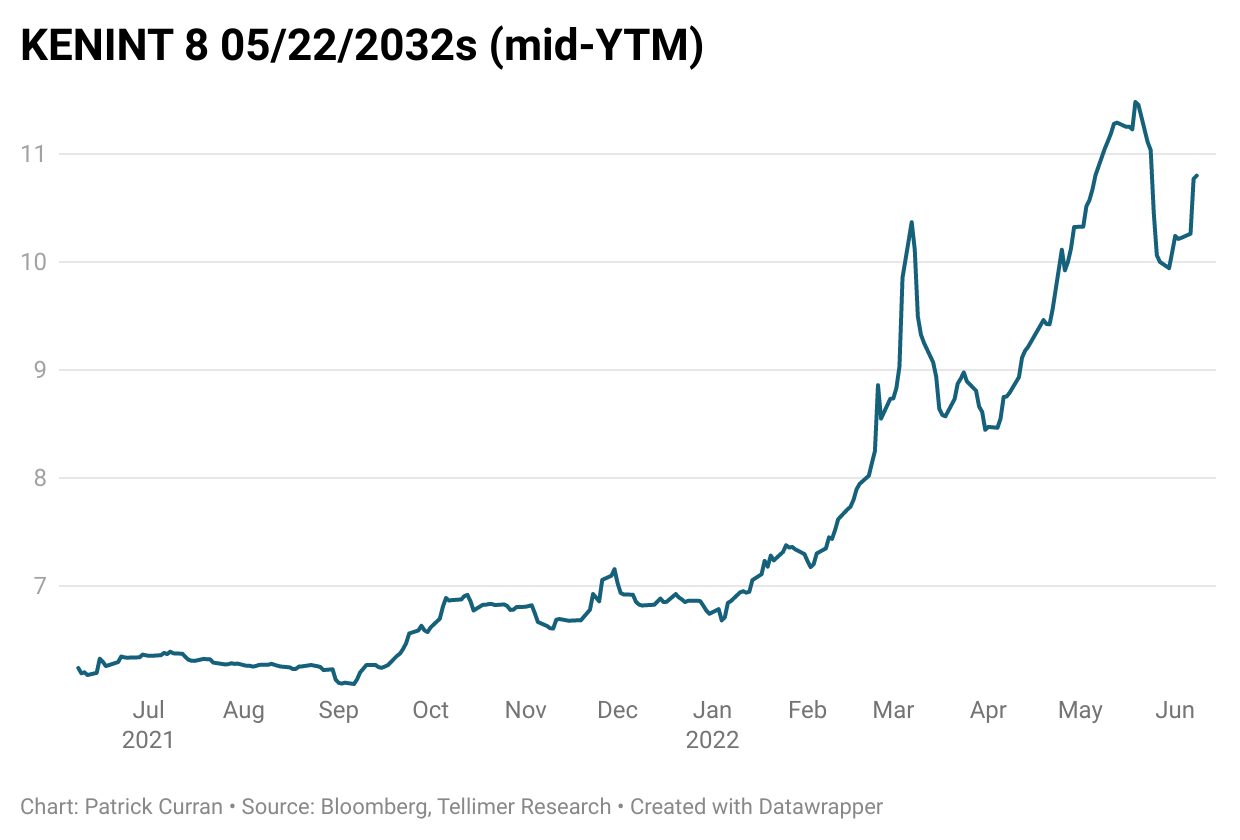 The debt ceiling headlines are, in our view, inconsequential. With public debt projected to reach KES8.6tn by June and a planned deficit of KES862.5bn in FY 22/23, it was always clear that the ceiling would need to be revised to accommodate the additional borrowing. Indeed, much like the US, raising Kenya’s nominal debt ceiling has become a regular, if tedious, housekeeping exercise over the years, and the new nominal debt ceiling provides limited insight into Kenya’s future borrowing plans.

That said, the decision to raise the nominal debt ceiling rather than switch to a new ceiling of 55% of GDP in PV terms, as proposed by the Treasury but not yet formally adopted by parliament, is a bit strange. A debt benchmark in percentage-of-GDP terms makes much more sense than a nominal target, and we had recently welcomed the move to switch to a more sensible target (while acknowledging that it seemed to lack teeth, with a sustained breach pencilled in through 2026, per budget targets).

The National Assembly’s majority leader, Amos Kimunya, said that raising the ceiling was an interim measure and that “the incoming government, whoever they’ll be, would be able to look at their programs and their financing needs” and make their own debt management proposals to parliament. This implies that the proposal to move away from a nominal anchor has been shelved in the runup to elections, but could be revisited when the new government takes office.

Against this backdrop, we view concerns about the increased ceiling as misplaced. The comments by Odinga, on the other hand, are much more concerning. According to Odinga, the plan is to “restructure and re-profile Kenya’s debt portfolio to achieve debt sustainability and reduce the debt burden of future generations". This seems to go against the recent IMF assessment that debt is sustainable, albeit with a high risk of distress.

That said, it is still not clear exactly what Odinga means. Across the frontier space, there have been recurring bouts of confusion where policymakers or politicians mention “restructuring” public debt, which implies NPV losses for creditors, when they mean “reprofiling” or “refinancing” debt in a liability management exercise, which is a good and proactive debt management tool and implies no NPV losses for creditors.

Odinga’s comments, however, seem to imply that he is angling for the former. The question that naturally follows is whether he hopes to achieve more targeted relief from bilateral creditors (akin to the DSSI or China’s rescheduling of debt in Angola), or whether he hopes to undertake a comprehensive restructuring that includes all creditors – which would now presumably have to be done under the Common Framework – and whether bondholders would be included in this or not.

Excluding bondholders from the restructuring may not be compatible with the Common Framework, whose explicit purpose was to include a wider set of creditors in any restructuring and prevent free-riding from private or non-Paris Club bilateral creditors (namely, bondholders and China), and rhetoric from the IMF has seemingly turned more aggressive of late on ensuring private sector participation. A Common Framework approach could complicate things, and even dissuade Odinga from embarking on this process in office, given how slow the process has been in Ethiopia and Zambia.

China, too, is unlikely to offer a 'bailout'. Angola’s strategic importance to China far outweighs Kenya’s, and China held a much larger portion of Angola’s public external debt (47% versus 22% for Kenya). China has also seemingly been the key holdout in Common Framework restructurings in Ethiopia and Zambia and has recently expressed dissatisfaction with Sri Lanka’s decision to restructure, implying less willingness to restructure (although we recognise that China is not a monolithic creditor, and is comprised of a mix of concessional and commercial lenders with varying interests).

In any case, whatever form the possible restructuring takes, it is likely it would likely be a complex process given the diversity of stakeholders. For context, 43% of external creditors are multilateral, 28% are bilateral (of which, 22% is China), and 29% are commercial (of which 19% are eurobonds).

Odinga’s other policy pronouncements were also somewhat concerning in the context of Kenya’s faltering fiscal consolidation drive, including plans to increase social spending, provide universal health care and free education through the tertiary level, and double the budgetary allocation to county governments. While expanding the social safety net is arguably necessary, it will lead to fiscal slippage if not accompanied by reductions elsewhere in the budget, possibly pushing debt to unsustainable levels.

Overall, we are more confident in our previous assertion that Deputy President Ruto is the more investor-friendly of the two candidates. The most recent poll shows Odinga leading by a 39% to 35% margin, but a significant share of voters is still undecided and the race in August promises to be a close one, with increasingly real stakes for the economy and investors if Odinga plans to restructure rather than simply reprofile Kenya’s debt stock.

There have also been several concerning developments this week beyond the debt ceiling and restructuring headlines. The Kenya Association of Manufacturers has reiterated previous comments that FX shortages are forcing businesses to buy FX at a c3-4% premium to the official rate and risking the establishment of a fully fledged parallel market, while local manufacturer Pwani Oil Products announced a temporary shutdown today due to FX shortages. We continue to think that KES is overvalued and further flexibility is required to ease external imbalances, without which reserve drawdown and weak export growth will persist.

Equally concerning, the National Assembly approved a supplementary budget this week that sees spending rise by KES71bn (0.5% of GDP) to accommodate additional spending for fuel subsidies, drought mitigation and security operations. The FY 21/22 deficit will increase by KES95bn (0.7% of GDP), pushing it past the 8.1% of GDP target (which itself was revised from 7.5% of GDP in another supplementary budget earlier in the year).

Kenya’s use of supplementary budgets has continued to undermine its fiscal consolidation plans. Further, the upwardly revised budget deficit will create a more difficult starting point for Kenya’s consolidation plans, and could derail the IMF programme if it cannot be accommodated within current programme parameters (as was the case for the previous supplementary budget). While Kenya has agreed to cut its fuel subsidy in FY 22/23, which will save an estimated US$230mn (0.2% of GDP), further slippage is still likely ahead of the August elections and further fuel subsidy cuts may be necessary (the World Bank estimates the monthly cost at US$66mn).

Although the wider deficit will be accommodated mainly through increased external borrowing, the government has seemingly shelved its plans for eurobond issuance for the time being, with Treasury Permanent Secretary Julius Muia saying that "we are pursuing various options at the moment in order to keep financing costs as low as possible, but the Eurobond route is looking at a little bit more difficult than before". This meshes with our earlier comments that plans to issue by June will be difficult given tight global financing conditions and the IMF’s stated preference for concessional external borrowing, and reduces near-term supply risk for the outstanding eurobonds.

Overall, we view the debt ceiling headlines as inconsequential but Odinga’s debt restructuring comments and evidence of FX shortages and pre-election fiscal slippage as concerning (if unsurprising for the latter two). If restructuring rhetoric turns more aggressive or explicit, we think eurobonds could sell off further in the coming months, especially if Odinga’s chances of victory in August rise. Conversely, if Odinga clarifies that he aims to “refinance” rather than “restructure” the debt or that private bondholders will not be included, this week’s sell-off may have created another opportunity to buy.

We recently upgraded our recommendation to Buy on the KENINT 8 05/22/2032s with a spread target of 675bps on the basis that the May sell-off had overshot fundamentals. While the downside risks have certainly risen since then, there is also more upside after this week’s sell-off. As such, we reiterate our Buy recommendation at US$82.76 (10.88% YTM) at the time of writing on Bloomberg and revise our spread target upwards by 25bps to reflect increased risks to a new target of 700bps (versus 830bps currently).

Kenya’s sell-off has created a Buy opportunity, May 2022

Kenya budget: Still on track, but margin for error continues to shrink, June 2021

Kenya budget: Ambitious targets, but can they deliver?, June 2020