Parliament has released a report documenting the potential impact of the Covid-19 pandemic. Given continued contagion and no intervention measures to combat the pandemic, the report estimates there will be a 2.6-2.8% reduction in economic growth in 2020 (GDP growth likely to average 2.8-3.2%). It is also estimates that the country will lose cKES122bn as a result of the recent tax cut directive, hence widening the fiscal deficit further. Since the first case was reported in the country, Kenya has now recorded 158 confirmed Covid-19 cases, with four recoveries and six deaths so far.

Key economic sectors that are affected by Covid-19 so far include tourism, services and the airline industry. Progressively, however, the negative impact will seep into other sectors, especially manufacturing and trade, which we see as especially vulnerable.

For banks, specifically, we expect a spike in non-performing loans (NPLs); bad news for a sector that was already struggling with weak asset quality. We expect the banks to revert to minimal lending and maintain their investments in government securities.

Safaricom, though, as a provider of essential services in the areas of money transfers/payments and communications technology, should be relatively resilient.

• Inflation – Inflation is estimated to remain within the government's target range of 2.5-7.5%. This is, however, dependent on how the government addresses the continuity of farming businesses, from production to distribution. We foresee this being a challenge as, on the ground, some major seed producing companies have already closed operations. And some major vegetable markets have closed for about a month. Additionally, the government is still considering complete lockdown, albeit as a last resort measure. Unless these directives are revised in the near future, the disruption of food production is likely to lead to much higher food prices in H2.

• Interest rates – The Central Bank of Kenya (CBK) has revised rates downwards, committing to keep them low to support lending. However, liquidity strain is starting to show in the under-subscription of short-term government papers. Although the authorities' intention is to stimulate economic and loan book growth, the strategy may fail as more sectors of the economy continue to close or cut business hours. Even with the lower interest rates, we expect NPLs to rise in 2020.

• Exchange rate – KES has already weakened by 5% YTD. Key risk factors remain: 1) the absence of an IMF stand-by loan facility, which is still under discussion; 2) the likely decline in diaspora remittances in light of the global economic slowdown; and 3) declining export income. There may be some respite from lower dollar demand as importers shut operations and oil prices continue to fall. KES is estimated to be overvalued by c40%

• Trade balance – Parliament expects a minimum 25% decline in export revenue. Kenya’s trading partners in Europe have been severely hit, with declining global incomes set to reduce demand for goods. Sector-wise, the flower industry is expected to lose KES60bn by end-20. Tourism, which accounts for c8.3% of Kenya’s total employment, is set to experience 1.1mn job losses, as the industry grinds to a halt. Oil, which accounts for 19% of total imports, has been recording consistent price declines since the start of the pandemic. On a net basis, it is expected that the import value will decline by c3%.

With looming slow economic growth, declining revenue and strain on the health sector, Kenya has limited fiscal space going forward. Our key concern remains the country does not have adequate resources to respond to the Covid-19 pandemic by way of economic stimulus, unlike what has been witnessed in developed countries.

The recent tax cuts mainly benefit employed Kenyans, with daily wage earners effectively falling through the safety net. This section of the population will either need the economy to be kept running or will require some support from the government. 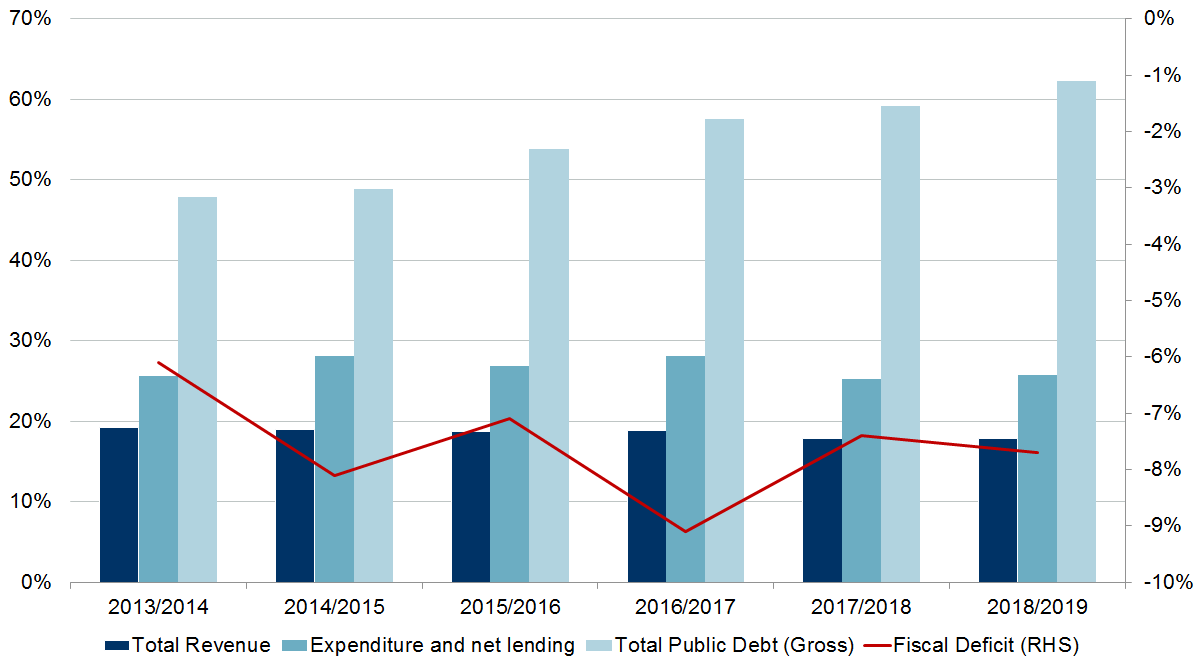 1. The provision of 100% personal income tax relief for Kenyans earning KES24,000/month is expected to result in an estimated KES19.8bn hit to tax revenue. The current income tax bands range from a rate of 10% for individuals earning KES12,298/month up to 30% for earnings above KES47,057/month. The proposal to exempt earnings below KES24,000/month implies that all earnings in the current two bands, that is, 10% and 15%, are tax exempt.

2. The lowering of the top pay-as-you-earn (PAYE) band from 30% to 25% is expected to hit tax revenue to the tune of KES7.08bn due to looming job losses and the reduction in remuneration for staff.

Total PAYE tax cuts will result in an overall 6% yoy reduction in PAYE tax revenue compared with the 2018/19 financial year.

3. The cut in corporation income tax (CIT) from the current 30% to 25% is expected to cost the country KES45.7bn (a 12% decline from the 2018/19 fiscal year). This is because of the expected revenue declines from slow economic growth and reduced output capacity for firms following curfew directives.

4. The reduction in turnover tax (ToT) from the current 3% to 1% for all MSMEs is set to cost the country KES50mn in revenue. The tax is fairly recent and, hence, does not provide much income for the government anyway. Currently, micro, small and medium-sized enterprises with annual turnover of KES5mn and below are required to pay 3% of their turnover.

5. The lowering of value-added tax from the current 16% to 14% will cost the country KES49.6bn in tax revenue, representing a 10% yoy decline in VAT tax revenue from 2018/19 fiscal year. VAT is charged on imports as well as goods and services generated domestically. Imports are likely to fall significantly given the transport, manufacturing and movement restrictions. This means that the component of import VAT will be affected twice; first, by the volume of trade and, second, by the reduced VAT rate. Domestic VAT will also be affected by reduced demand for goods and services as well as the reduced rate.