Kenya's National Treasury has confirmed that the measures proposed to deal with the impact of Covid-19 would be permanent, which we see as positive for the economy. Last week, President Uhuru Kenyatta proposed cuts on income tax, turnover tax and VAT, which were initially meant to help deal with the coronavirus crisis. Since reporting the first case of Covid-19, the country now has 110 confirmed cases with testing still being carried out for contacts traced.

The latest tax cuts are meant to spur economic growth and increase spending. However, we remain concerned that the government is yet to address how it will respond to the widening fiscal deficit as a result of the reduced revenues. The government will either have to cut spending (which we think will be an uphill task), continue implementing policies that will boost economic growth or rely on borrowing to plug the deficit. Our key concern is that the government has been borrowing aggressively over the past few years and with expected slow economic growth, further borrowing is not ideal, but will be necessary.

The Treasury is extending the following tax relief:

3. Reduction of resident income tax (corporation tax) to 25% from from 30%. Corporation tax, according to KNBS, accounted for c20% of ordinary revenue in the 2018/2019 financial year.

4. Reduction of the turnover tax rate from the current 3% to 1% for all Micro, Small and Medium Enterprises (MSMEs).

While the tax reductions will be helpful to support economic growth, they will also result in lower revenue for the government and hence, widen the fiscal deficit. Kenya’s revenue base as a percentage of GDP has already been falling consistently – revenue was 16.1% of GDP in the 2018/2019 fiscal year, compared with 18.1% in 2013/2014. According to the World Bank, this can be attributed to: 1) growth in non-tax revenue-rich sectors such as agriculture; 2) changes to the income tax code that have allowed for tax holidays; 3) a large informal sector that employs an estimated 15 million Kenyans, and; 5) firms staying under the tax radar. 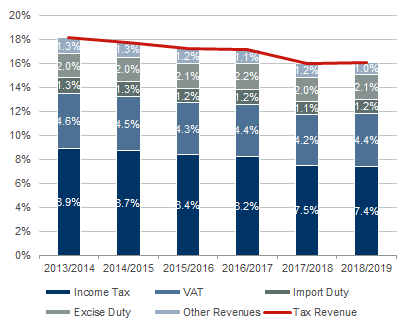 Of the tax categories, income tax recorded the highest fall to 7.4% in 2018/2019 from 8.9% of GDP in 2013/2014. This was on account of lower revenue from corporates (where telecommunications and finance sectors account for 60% of tax revenue) and lower contribution from personal income tax. Corporate income tax decreased mainly on lower profitability of the financials sector post-interest rate cap, and tax incentives offered by the government to some corporates.

We also expect earnings to be subdued on account of the Covid-19 impact. At present, the airline industry has already stopped operating with major airlines, including Kenya Airways, now asking for a bailout from the government. Hotels in the country have also started closing down due to lack of clients. We expect the economic strain to seep into other sectors over time, which will further subdue revenues for the government. For example, with tourism almost shutting down and job cuts that follow, we expect further contraction in personal income tax, which was already strained in formal employment.

Faced with lower revenues, the government should ideally pursue lowering recurrent expenditure (which accounts for c70% of total expenditure) to increase available funds and reduce fiscal deficit. However, challenges remain. According to the World Bank, about 68% of the government's expenditure is classified as high rigidity budget items (mostly salaries and interest payments). A continued reduction in spending has been a key discussion with the World Bank in preparation for a precautionary facility being negotiated for by the Government. But as most government employees are permanent and pensionable, the room to scale back on the wage bill remains limited. Therefore, the government will have to reign in the persistent wage increase in recent years, and minimise hiring to key critical and technical services only. 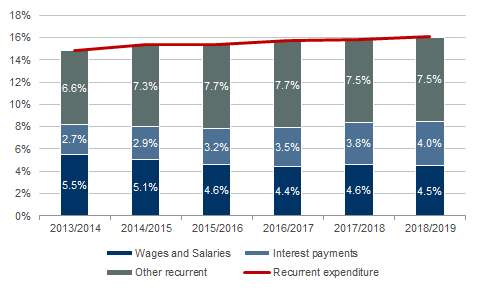 Ideally, the government could pursue retiring short-term commercial debt, but in light of the revenue challenges that the country is set to face, opting to source concessional loans would be a more viable option. Overall, the challenge remains the consistently rising debt/GDP ratio, which is now at 62.3%. 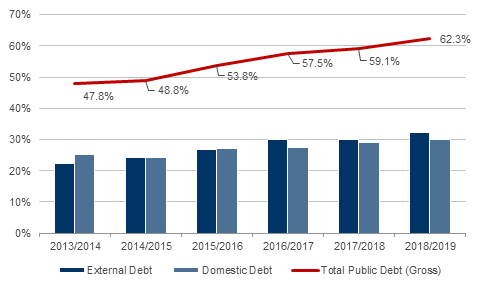 Separately, other measures put forward by the government to deal with Covid-19 so far include:

1. Appropriation of an additional KES10bn to the elderly, orphans and other vulnerable members of society through cash transfers by the Ministry of Labour and Social Protection.

2. Temporary suspension of the listing with Credit Reference Bureaus (CRB) of any person, MSMEs and corporate entities whose loan account has fallen overdue or is in arrears.

3. All ministries and departments will 'cause payments' of 13 B of pending bills within three weeks.

4. KRA shall expedite all payments of VAT refund claims within three weeks or allow to offset withholding VAT for business.

5. 1B from universal health plan for recruitment of additional health workers to support Covid-19 efforts.

7. Government officials to take a pay cut as follows: President and Vice-President 80%, ministers 30% and permanent secretaries 30%.

8. All state officers with pre-existing conditions, older than 50 years and above serving in job groups F and below, to take leave or work from home. This excludes personnel in security and essential services.