Constitutional reform, under the "Building Bridges Initiative" which started with the reconciliation "handshake" between President Kenyatta and opposition leader Odinga in March 2018, moved one step closer on 6 May, with the passage of the eponymous bill in the lower house of Parliament.

The next step is a referendum before the August 2022 election and, perhaps, as early as July 2021. The reforms include the creation of the post of Prime Minister and greater allocation of the Budget for local county governments (from 15% to 35%).

Supporters of the reforms view them as safeguards against ethnic-based conflict under a winner-takes-all presidential system (where the subset of Kenya's ethnic communities aligned with the winning candidate disproportionately benefit). Cynics view the reforms as an attempt to circumvent the tacit pact between leaders of the erstwhile Jubilee ruling coalition to campaign for a handover of leadership from President Kenyatta to Vice-President Ruto in 2022 (when Kenyatta hits the two-term limit).

The Jubilee party, when united, accounts for about 50% of the lower house of Parliament and Kenyatta won the disputed August 2017 Presidential election with a 54% of the vote. The division in Jubilee between Kenyatta (comprising mainly the Kikuyu ethnic component, the "Kieleweke" camp) and Ruto (comprising mainly the Kalenjin ethnic component, the "Tangatanga" camp) has been an open sore since the 2018 Kenyatta-Odinga "handshake" but there has been no formal split into two parties. Voting on the Building Bridges Initiative bill may provide clues as to Ruto's parliamentary support base. Opposing votes after the second and third readings of the bill amounted to 26% and 22%, respectively, of MPs in attendance.

The Rift Valley region, which Ruto continues to dominate, accounts for 25% of registered voters, the largest single region; in a Presidential system this makes Ruto a key player, as candidate or kingmaker. However, if the introduction of the post of Prime Minister facilitates a move towards a Parliamentary system, and the greater allocation of the Budget for local government degrades the importance of the central executive (ie "all" shrinks in the "winner-takes-all" system), then Ruto and the Rift Valley becomes less important. Kenyatta's section of Jubilee could support Ruto for the Presidency in 2022, notionally sticking to their pact but safe in the knowledge that the importance of the position has been diluted. 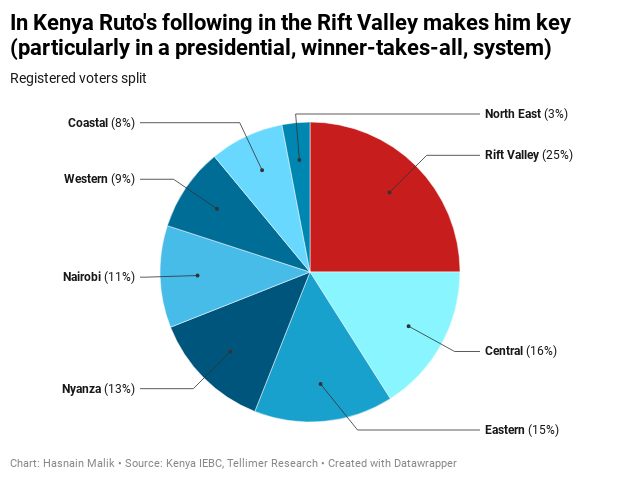 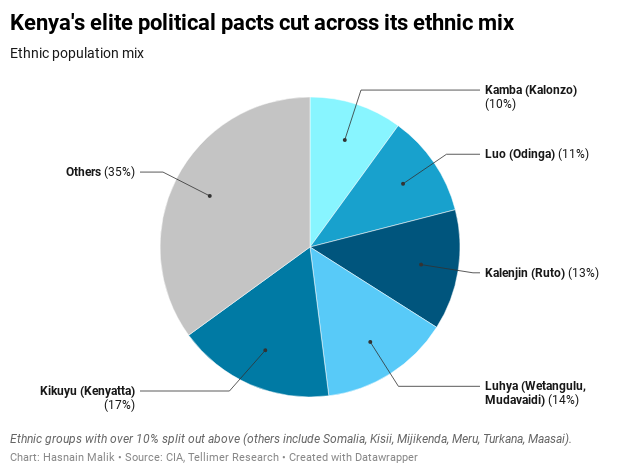 We reiterate our view that divided politics remain a distraction that undermines structural reform in Kenya. But the miracle of mobile-led financial inclusion continues to drive relatively high economic growth (7.6% real GDP growth in 2021, according to IMF forecasts, which is significantly higher than the Africa equity markets we track, eg Egypt, Nigeria, and South Africa are nearer 3%).

Kenya equities, measured by the Nairobi All Share index, are up 17% year-to-date outperforming most Africa peers. The market remains split between perhaps the only stock in Africa ex-SA owned by global emerging market funds, mobile telco Safaricom (65% of the index, with trailing PE of 23x, a 25% premium to the 5-year median) and the rest, exemplified by the bank KCB (5% weight, PE of 4x, a 25% discount to the 5-year median).

Forward dividend yield of the index is 3.9%, an attractive premium for local investors compared to the real interest rate of 1.2%. For foreign investors, twin deficits (8% fiscal, 5% current account, according to IMF 2021 forecasts), merit caution but FX reserves import cover is 6 months, remittance growth remains high (up 17% yoy in 1Q 2021), short-term external debt is low (3% of GDP), and there is an IMF backstop (US$2.3bn facility until June 2024).

For Africa equity portfolios which can tolerate a low level average trading activity (below US$4.5m for the whole market on average over the last 6 months), Kenya offers attractive exposure to:

Whether this combination makes Kenya attractive to wider small Emerging and Frontier markets is a different question; we continue to prefer cheaper markets with structural reform potential in Asia (Indonesia, Pakistan, Philippines) or similarly valued ones with similarly fast, and more export-led, growth (Bangladesh, Vietnam) – all of these markets have much higher trading liquidity levels.