Kenya is a global leader in renewable energy, generating c92% of its electricity from renewable sources, according to the Kenya National Bureau of Statistics. But the country also suffers from frequent nationwide power outages, the latest one occurring last week, which lasted over three hours due to the collapse of a transmission line. The national power distributor, Kenya Power and Lighting Company (Kenya Power) did not offer any further explanation beyond that.

This would be the third blackout in four years. Power outages are a common occurrence as Kenya Power routinely carries out scheduled service interruptions for maintenance. But the latest outage once again puts the spotlight on the cash-strapped Kenya Power, which has a monopoly in power distribution, and raises questions about its ability to provide stable power supply (the company has also come under fire for the time it takes to restore power and inflated bills).

Power outages can cripple the economy – especially affecting industries and small businesses – and disproportionately affects the poor. It also has a huge impact on those working from home. For those that can afford it, there has been a significant shift towards solar power systems due to the frequent blackouts. This includes key industrial customers like East African Breweries, Kapa Oil refineries, Moi International Airport and Williamson Tea.

Although Kenya Power's management has said it intends to set up dedicated distribution lines to ensure industrial customers do not experience outages, we believe this has come too late with companies having already committed to solar energy investment plans.

Overall, we expect increased investment in solar energy to fill in the power supply gap.

Kenya Power served about 7.6mn customers nationally in 2020, growing from 4.9mn customers in 2016. Despite this, the distributor's profit after tax has fallen to KES1.49bn from KES7.2bn in the same period. The distributor's declining profitability has therefore limited the headroom to invest in its network and hence reliable power supply will continue to remain a challenge.

Below, we highlight some of the challenges that plague Kenya Power.

In 2015, the government announced the Last Mile Connectivity Program to provide universal access to electricity by 2020. While 75% of Kenyans now have access to electricity, the increased customer base has not resulted in higher revenue per customer (customers in rural areas have little spending power). At the same time, collection remains an issue with unpaid bills due for over 180 days centred around domestic customers (60%), SMEs (20%) and commercial customers (10%).

Management highlighted in 2020 that the company has recruited debt collectors to help collect unpaid bills from customers, which they project will improve the company's cashflow. In our view, the power distributor should focus on recruiting higher value customers especially in the commercial sector, in addition to enhancing collection. 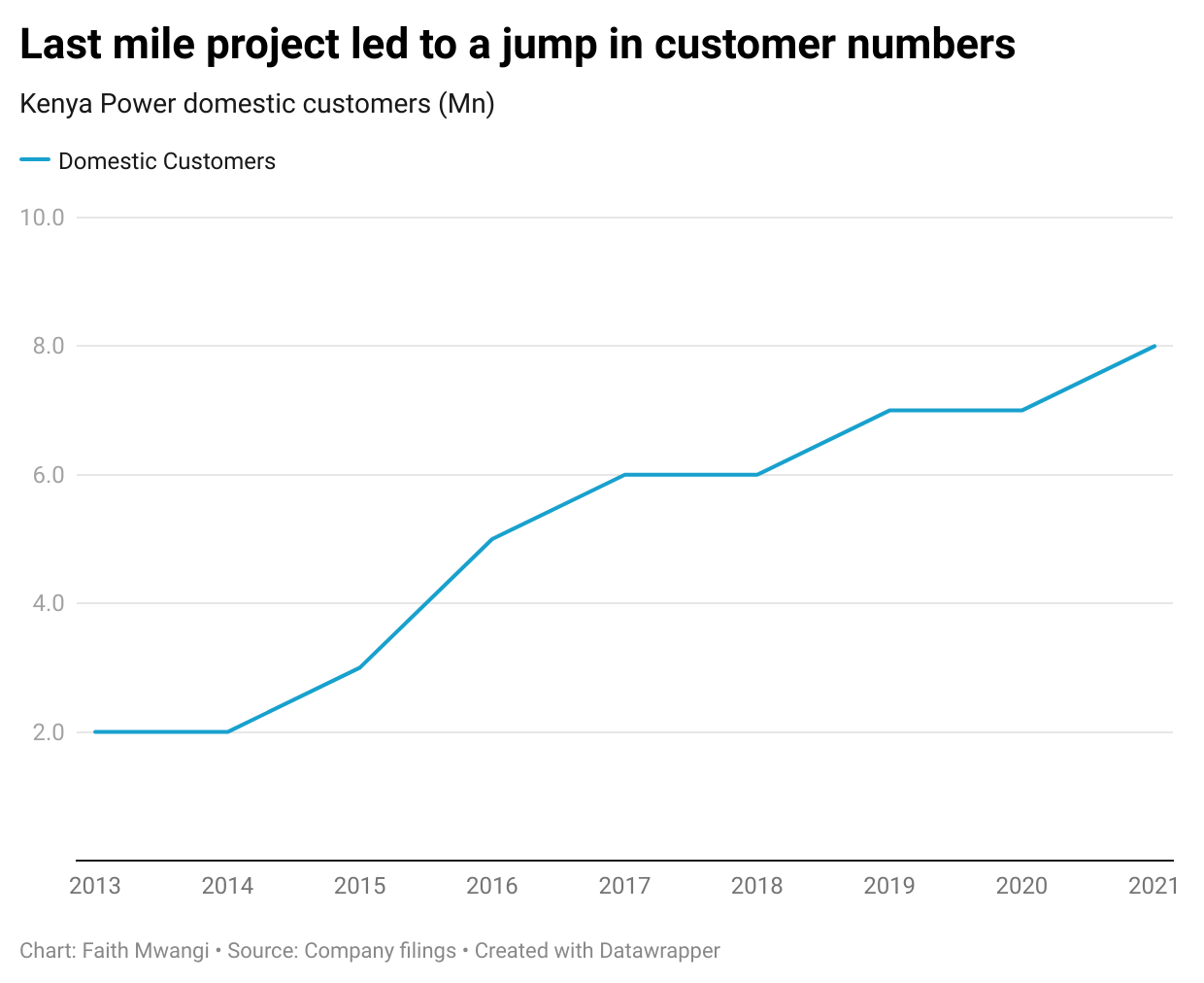 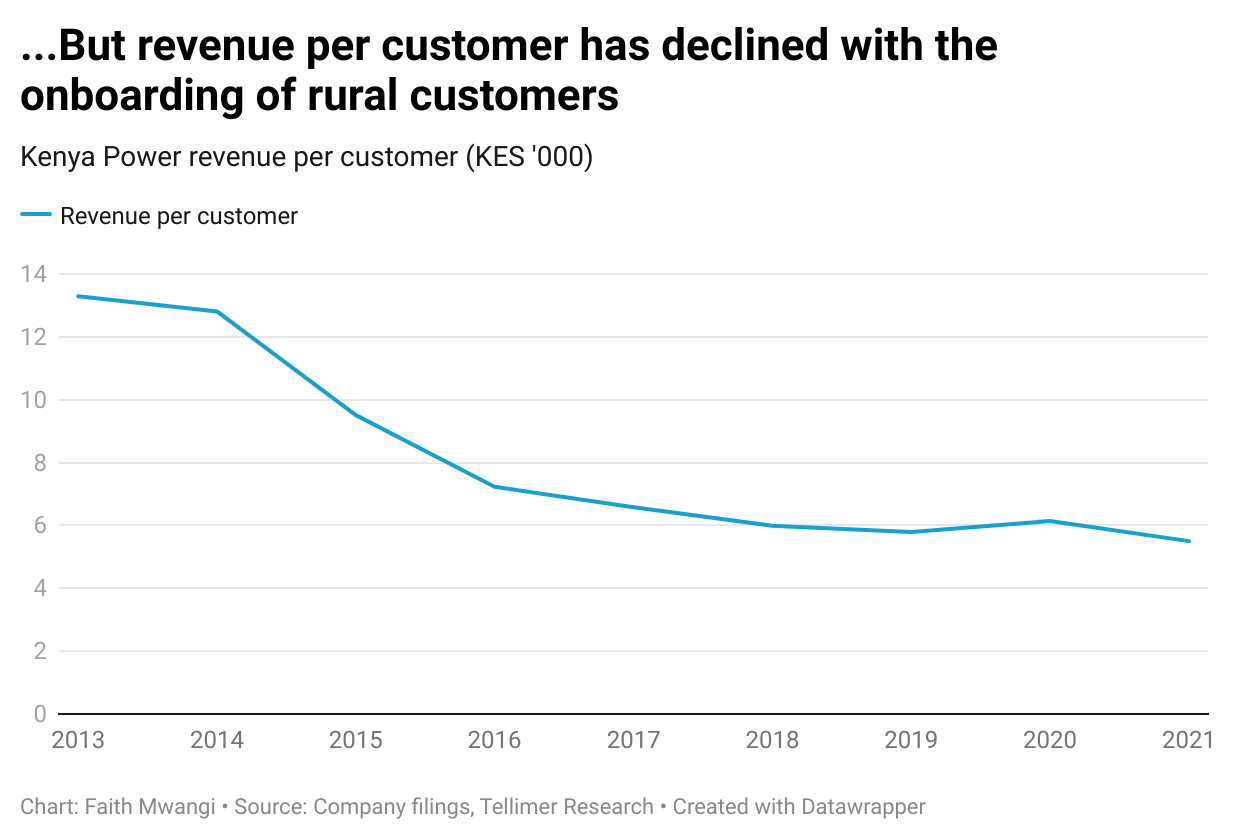 2. The company is losing its industrial customers to alternative power sources

Commercial customers account for less than 5% of Kenya Power’s clients but represent more than 50% of its revenue. However, due to frequent blackouts, industrial consumers are now increasingly shifting to solar energy (as we highlighted above). Despite the management's efforts to set up dedicated distribution lines for industrial customers, Kenya Power may be unable to fully recover its customer base unless they onboard new industrial consumers.

Kenya Power has been reliant on debt to run operations with its finance costs eroding earnings in the last five years – 52% of operating profit in 2020 versus 33% in 2015. On this matter, the power distributor has received a debt repayment moratorium on part of its debt for two years, until June 2022. The firm has also negotiated restructuring of its debt to improve cash flow. While these measures can support the company in the medium term, there is still a need to boost cash flow from collections and an increased customer base to meet its debt obligations in the long term.

The company's system losses – the difference between the total amount of energy procured and amount sold – stood at 23% in 2021. According to management, for every 1% of system losses, the company loses about KES800mn. For 2021, system losses therefore translated to KES3.2bn.

System losses mainly come from either lapses in the transmission and distribution process or, meter tampering and illegal connections. It is estimated that the Kenya Power loses about 80% of expected revenue due to illegal connections in informal settlements. Although Kenya Power is pushing to move clients to pre-paid meters and making efforts to curb illegal connections, widespread corruption in meter procurement has proved to be a hindrance. As a result, system losses are likely to remain above the 20% level.

Presidential task force to undertake reforms for Kenya Power, but no firm action yet

Kenya's President Uhuru Kenyatta set up a task force in 2021 to oversee issues plaguing the sector – with the intention of reducing electricity prices by at least 30% and addressing the internal problems of Kenya Power.

Although the task force has made recommendations regarding some of the issues we've highlighted above (including commissioning an investigation into the management of Kenya Power), no firm action has been taken so far. Given that the government owns 50% of Kenya Power, the company will continue to be a going concern, leaving the power outage issues and other key challenges largely unaddressed for now.