Copper remained focused on the United States into the back end of last week with hopes of massive US spending as part of its economic stimulus plans underpinning the pricing action. This allowed the red metal to settle above the $10250/tonne after it spent much of last week below the $10000/tonne mark.  The market also received additional support from Chile with the strike action at BHP’s mines giving rise to supply fears even though the company has stated that it does not expect any interruptions in supply as a result of the workers doing tools.

South Africa: Last night, President Cyril Ramaphosa announced that South Africa would return to stricter lockdown measures due to current rising COVID-19 cases. He said some parts of the country, including Johannesburg and Pretoria, were experiencing third waves and announced limitations on the number of people at social gatherings, lengthened curfew hours, and earlier closing hours for non-essential businesses.

Kenya: Over the weekend, the Kenyan government extended the nationwide curfew by a further 60 days to July 27. The extension of the curfew comes as the health ministry warned that there was a high possibility of a fourth wave amid the surge in COVID-19 infections in the country. The curfew will be between 10 p.m., and 4 a.m., with effect from May 28. Kenya also tightened restrictions by imposing a ban on political gatherings and procession and prohibitions on overnight events and vigils. However, they also relaxed restrictions on schools. It is worth pointing out, the tightening of restrictions will have an adverse impact n the pace of economic recovery.

Botswana: Botswana entered the debt capital markets once again on Friday. Demand was strong for the 2027 issuance with the bid to cover ratio coming in at 5.9, with BWP 39m allotted at an average yield of 5.923%. The longer-dated 10yr experienced less demand with the bid to cover ratio recorded at 1.25. The government did however place more of this bond issuing BWP160m at an average yield of 10.91%. The market will welcome the greater issuance in the longer end of the curve as it does build out a more robust fixed income market with potential availability of stock in longer durations.

Mozambique: The Centre for Public Integrity (CIP) said in a report released on Friday that the hidden debt scandal has already cost Mozambique $11bn and has placed as many as 2mn people in poverty. The hidden debt scandal resulted from illicit loans of more than $2bn from the Credit Suisse and VTB of Russia in 2013 and 2014 to three fraudulent Mozambican companies, namely Proindicus, Ematum, and Mozambique Asset Management. Recall that the loans were only granted due to the then government providing loan guarantees, which violated Mozambique’s constitution. The approval of the loan guarantees has been pinned on former Finance Minister Manuel Chang, who is currently sitting in jail in South Africa. The CIP report shows how financially devastating the hidden debts scandal has been for Mozambique.

Ethiopia: The US government asked multilateral development banks on Friday to suspend funding to Ethiopia as new reports of human rights abuses surfaced from the war-torn Tigray region. The Acting Assistant Secretary for the State Department Bureau of Africa Affairs Robert Godec told reporters that they are confirmed reports of Tigrayans dying from malnutrition and starvation. The latest call will likely result in the World Bank and the International Monetary Fund withholding funding. This will put pressure on the government books, given their heavy reliance on foreign aid for their budget.

Tanzania: In a bid to support economic recovery, the Bank of Tanzania pledged to remain accommodative for the year through to June. The bank also called on the commercial banks to lend to the private sector to help support the economic recovery. With headline inflation in Tanzania benign and the risk of a surge in inflation expected to remain low, the central bank should be able to maintain its accommodative policy for some time. The central bank expects GDP growth to rebound to 5.7% this year versus 4.8% previously.

Tanzania: The World Bank approved three projects in Tanzania with combined financing of $875mn from the International Development Association. The Regional Vice President for the World Bank Hafez Ghanem said that "the three projects approval reflects the World Bank’s strong support to Tanzania and will help accelerate growth as they expand access to economic opportunities." The funds will help improve rural road access and employment opportunities, strengthen the learning environment and alignment of priority education programs with the labour market at selected higher education institutions and increase access to high-quality broadband internet services.

Namibia: Namibia and Germany concluded negotiations on Friday that will see German recognize colonial-era mass killings in Namibia as genocide. t. Speaking to the media, German Foreign Minister Heiko Maas said that “we will now describe these events officially as what they were from today’s perspective: genocide.”

In line with other regional central banks, the Bank of Angola decided to leave its benchmark interest rate on hold on Friday. The policy rate remained anchored at a record low of 15.50%. Note that this marked the twelve successive meeting that the policy rate has been kept on hold. The decision to keep rates on hold was to bolster economic growth. 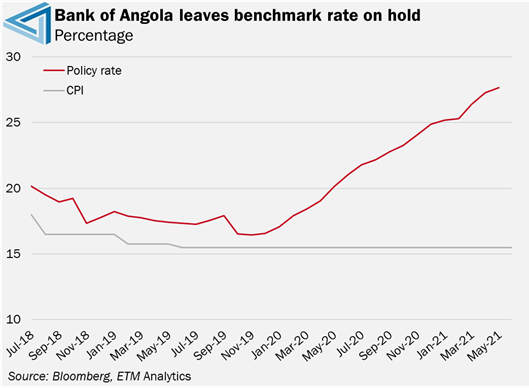 The central bank however raised the mandatory reserves level in foreign currency from 17% to 22%. Governor Jose de Lima Massano also announced the scrapping of obligations to hold part of reserves in kwanza. The slightly hawkish move is likely to help stem inflation pressures that are persisting from the supply side. Central bank governor Massano also revised inflation forecasts upwards for end-2021 from 18.7% to 19% off the back of increases in prices of food and non-alcohol.  Note that these projections may be revised again in June.

Focusing on the FX market, although the Angolan kwanza (AOA) has found a firmer footing against the USD this month, the risk remains tilted to the upside. For context, the AOA has strengthened by 0.42% against the USD this month, primarily driven by the rising global commodity prices. However, the persistent increase in inflation is pushing Angola’s real interest rate further into negative territory. This, against the backdrop of weak fiscal dynamics, suggests that the risks to the outlook for the AOA are tilted to the downside.

The latest Bank of Ghana (BoG) Summary of Economic and Financial Data showed that Ghana’s public debt pile rose by GHS 3bn in March to reach GHS 304.6bn at the end of the first quarter of 2021 compared to GHS 291.6bn at the end of last year. While Ghana’s public debt pile swelled in March, it is worth noting that the country’s debt to GDP ratio came in at 70.2% at the end of quarter 1 2021 compared to 76.1% end of quarter 4 2020. Note that the decline in the debt to GDP ratio however reflects an expansion in the size of the economy.

As mentioned in Friday’s note, fiscal risks in Ghana are tilted firmly to the topside. Both the International Monetary Fund and the World Bank have raised concerns over the marked increase in Ghana debt stock in recent months. The IMF has warned that the country is moving towards the category of a highly debt distressed county. The IMF said in a recent statement that it projects that Ghana’s debt pile will rise above GHS 300bn before the end of the year. As such, expect a significant degree of fiscal risk to remain baked into Ghanaian bonds.

International Monetary Fund staff agreed to provide $1.5bn worth of financing to the Democratic Republic of Congo over the next three years, according to Bloomberg.  The agreement, which still needs final approval by IMF management and its executive board, will mark the end of two years of negotiations between Congo and the IMF. If given the green light by the IMF’s executive board, this will be a major victory for the Tshisekedi administration and will provide much-needed support for the government to push forward with its policy agenda.

The IMF noted that the Extended Credit Facility should also bolster the country’s recovery from the COVID-19 pandemic and will help reduce poverty. Mauricio Villafuerte, the IMF’s mission chief for Congo said, “the program aims at building fiscal space for much needed social spending and investment, enhancing the monetary framework and financial supervision, and improving economic governance and  transparency.”

Securing a formal loan agreement with the IMF could open the door to billions of dollars of additional funding for the country, as other international lenders such as the World Bank would view the deal with IMF as concrete evidence that the government is committed to prudent fiscal policy. Recall that in order to secure a loan program with the IMF, a country has to adhere to strict agreement rules, which could include fiscal reforms and debt transparency as well as conditions including reforms of the central bank and value-added tax system, and more transparency in the mining industry, which was stipulated by the IMF.

On balance, the IMF program and easing of political uncertainty will undoubtedly provide a boost to domestic sentiment. Therefore, if the agreement is passed by the executive board, we are likely to see domestic assets strengthen. The currency should receive a boost from the influx of dollars, while bonds should strengthen on the back of expectations that the government will adopt a more prudent fiscal policy stance.