UST futures are back under pressure this morning, with yields rising on the session thus far to take the 2yr back towards 3.45% as oil prices have risen through the week so far on the back of yesterday’s OPEC+ output reduction announcement. Focus, however, for yesterday was on gilts as Liz Truss was named the new Prime Minister of the UK. Gilts initially weakened on the announcement, but have since pared some of those losses after she announced plans to limit energy bills in the country, offsetting some inflationary pressures. The measures, however, are set to cost the government billions, which means more supply of bonds ahead, preventing a full rebound from occurring.

Looking ahead, hawkish central bank expectations will remain the main driver of direction in the markets, with focus likely to turn to Wednesday’s Fed Beige Book release. The last edition was relatively bearish on the economy, and if this has worsened since, it may lead to some repricing of rate hike risk in the US. It could, therefore, be a case of bad news is actually good news for the market.

Kenya: In a unanimous verdict delivered by Chief Justice Martha Koome, Kenya’s Supreme Court upheld William Ruto’s victory in last month’s presidential election. The seven-member court dismissed claims by Ruto’s rival, Raila Odinga, that the vote was marred by rigging and irregularities, and the judgement paves the way for Ruto to be sworn in as president next week. The court’s decision is final and cannot be appealed. The court’s decision is a major step toward ending political uncertainty in Kenya after Odinga’s rejection of the results fanned anxiety among the nation’s bondholders. Investors will be watching closely for his reaction to the ruling, which could determine whether there will a repetition of protests and violence that ensued in the wake of previous disputed votes.

Kenya: Data from the Central Bank of Kenya’s weekly bulletin showed that foreign exchange reserves fell to $7.38bn in the week ending September 2 from $7.61bn in the week prior. At the current figure, Kenya’s foreign exchange levels are at the lowest in five years, under-pinning the pressure the CBK is facing to shore up foreign exchange reserves amid a slump in the shilling and increased demand for dollars by importers. Kenya’s foreign exchange reserves have been on a downward trend in recent weeks as the bank uses part of its stockpile to slow the pace of the shilling’s depreciation. The shilling has lost more than 6% YTD against the dollar as elevated oil and food prices weigh heavily on the trade and current account balances. Elevated oil prices have driven Kenya’s import bill higher, while increased dollar demand has not been matched by supply amid reduced inflows from key export earning sectors.

Nigeria: Nigeria yesterday opened two saving bonds at the highest rates in three years, reflective of the continued monetary policy tighten-ing by the central bank. Specifically, the debt management office reported that the 2-year savings bond opened at 11.04% and the 3-year bond at 12.04%, the highest rates since October 2019. The debt management office also indicated that the offer closing date is September 9, and the settlement date is September 14. Meanwhile, the interest is payable quarterly.

Uganda: Local reports citing an official at the finance ministry indicate that Uganda is set to ban exports of unprocessed gold. The ban on exports of unprocessed gold is contained in a mining bill due to be assented to by the president. The regulations for the export of the metal will be formulated after the assent of the bill. The ban would replace the 10% tax introduced last year to discourage the shipment of unre-fined metal vs. 5% for refined gold. Note that Uganda is trying to curb exports of raw minerals to boost the value of exports by only shipping refined products of higher value.

Egypt: To support its drive to expand reliance on renewable energy, Egypt is reportedly considering the construction of two large solar and wind power generation projects. The two projects are part of a government strategy to increase renewables in the country’s energy mix by 45% in 2035. Local reports citing Egypt’s New and Renewable Energy Authority (NERA) also indicate that projects under study include a solar power plant with a generation capacity of 830 megawatts (MW) and a wind power facility with a capacity of 1,700 MW. Meanwhile, two other wind power projects which have been approved include a 1,375-MW facility and a EUR1.35bn ($1.35bn) unit in Zafarana and Jebel El-Zeit in the Western Red Sea.

Oil: Oil is paring its rally from yesterday, with the front-month Brent contract dipping back below the $95 per barrel level in early trade today. Oil gained almost 3% yesterday as OPEC+ delivered a somewhat unexpected output cut for October, with all members agreeing to the 100k bpd reduction in output. While the cut is minuscule compared to total output, it is seen as a symbolic move, indicating that the cartel and its allies are willing to do what they must do to support the market if needed. OPEC+ also announced that it could hold an emergency meeting at any time in the coming weeks, if the market continues to weaken. This effectively puts a floor on prices for now, with OPEC+ returning to more of an active management strategy of the market. For now, however, the cut does little to change the overall demand-supply dynamic of the market, with focus turning to China as lockdowns in the country are spreading once again, crimping demand for fuel in the world’s largest oil importer. This will limit any further gains for crude for now and will be something that OPEC+ needs to keep an eye on over the coming weeks.

The Central Bank of Kenya (CBK), in its quarterly review, reported that the current account balance deficit widened further to $1.59bn in Q2 2022 from $1.46bn in the corresponding quarter in 2021, reflecting increased imports amid robust growth in the receipts from merchandise goods, services and remittances. Secondary income flows were boosted by remittances, which increased to $1.03bn in Q2 from $941mn in the similar quarter in 2021.

A further breakdown of the data showed that the trade balance deficit widened by 25% to $3.16bn in the second quarter of 2022 from $2.52bn in Q1 2021, owing primarily to increased imports, especially of petroleum products. The value of merchandise exports rose to $1.97bn from $1.67bn in Q2 2021 due to increased earnings from tea, chemicals, and manufactured goods despite a decline in receipts from horticulture. Meanwhile, the value of merchandise imports increased by 22% to $5.13bn in the second quarter of 2022, largely due to increased imports of petroleum products owing to higher international crude oil prices. 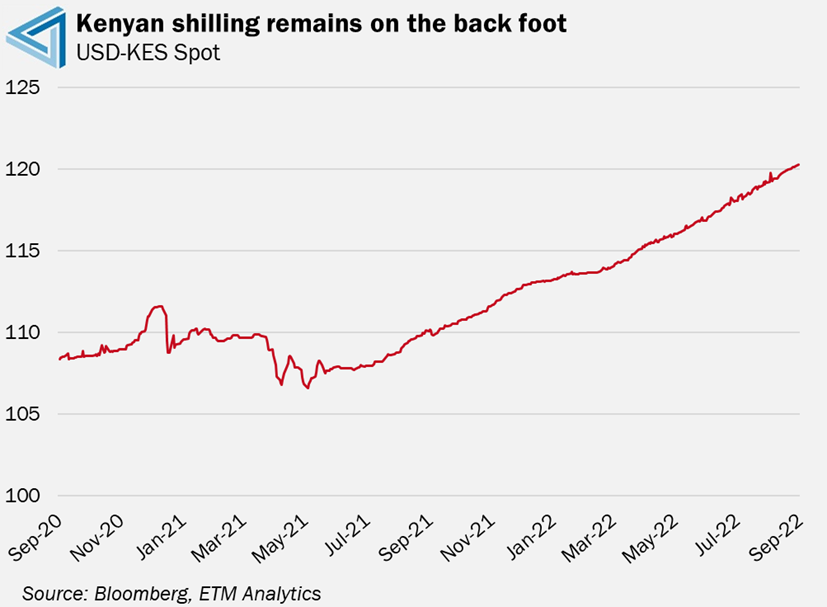 Global bond markets have been under pressure this year amid a dramatic shift for monetary policy, as central banks look to withdraw their pandemic-era stimulus and tighten monetary conditions in order to rein in inflation. While rising interest rates are the main tool at the disposal of these central banks, there is also the unwind of asset purchases that markets have to contend with. Since June, the Federal Reserve has been unwinding its holding of US Treasuries as well as mortgage-backed securities, with the pace expected to accelerate through September to full speed. The Fed will be selling $95bn worth of assets a month from here on. This effectively withdraws liquidity from the market, reducing the amount of US dollars in circulation not only in the US, but globally.

The asset price boom seen during the immediate aftermath of the pandemic was largely a result of the Fed’s Quantitative Easing program. With this ending and Quantitative tightening beginning to reach full speed, riskier assets, such as those in frontier markets like Africa, will be heavily impacted. Africa already suffers from a shortage of dollars and liquidity, and QT by the Fed and the likes of the Bank of England will only exacerbate this. With this in mind, capital will flow away from countries deemed to be too risky, and the available capital there is only going to those markets that are deemed the most fundamentally sound. For Africa to attract this capital, some notable economic and fiscal policy reforms may be needed.

Our view at the moment is that countries such as Kenya, Uganda, and Zambia may outperform compared to those from the continent, such as Nigeria and Ethiopia. Egypt also has the potential to attract foreign capital, but its fiscal situation remains quite fragile at the moment, and thus we may need to see some improvement there before investors will commit funds in an environment of tightening global liquidity. 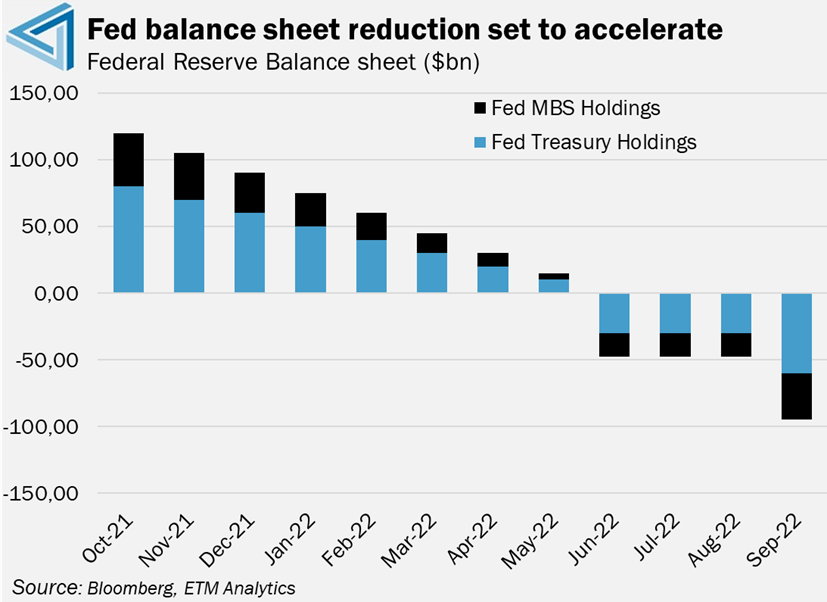 Yesterday we had several PMI figures released for Africa. The trend across the board seemed to be generally negative. However this excludes Egypt as its PMI was the only figure to improve this month, from 46.4 to 47.6. The improvement in PMI was as a result of easing inflationary pressures which saw the rise in input costs being much softer than what we saw in July. However, with uncertain monetary policy conditions, the exchange rate weakening, and supply chains still under pressure due to the war between Russia and Ukraine, risks to the inflation outlook remain to the upside, and to the downside for the Egyptian economy as a whole.

Meanwhile, business conditions in Ghana’s private sector continued to deteriorate as price pressures have continued to weigh on demand. The PMI declined from 48.8 in July to 45.9 in August, signalling a faster pace of contraction. The central bank has been hiking interest rates very aggressively, thus, there are quite large risks to business conditions within the Ghanaian economy as high interest rates will likely start to weigh on consumption.

Kenya’s PMI fell further into contractionary territory this month as well, as disruptions from the national election have resulted in further declines in output and new orders. Business confidence within Kenya is at the weakest it has ever been, which has now also resulted in a drop in employment. Finally, the risks to cost pressures within Kenya will likely depend on the timing of the removal of fuel subsidies.

Finally, Mozambique’s PMI reached the lowest level in five months, and is pointing to a sustained slowdown in the private sector growth. The PMI declined to 50.8 compared to 51.7 in the previous month. However, the PMI has remained above the 50-level for seven straight months now, suggesting that the economy continues to grow, albeit at a slower pace. 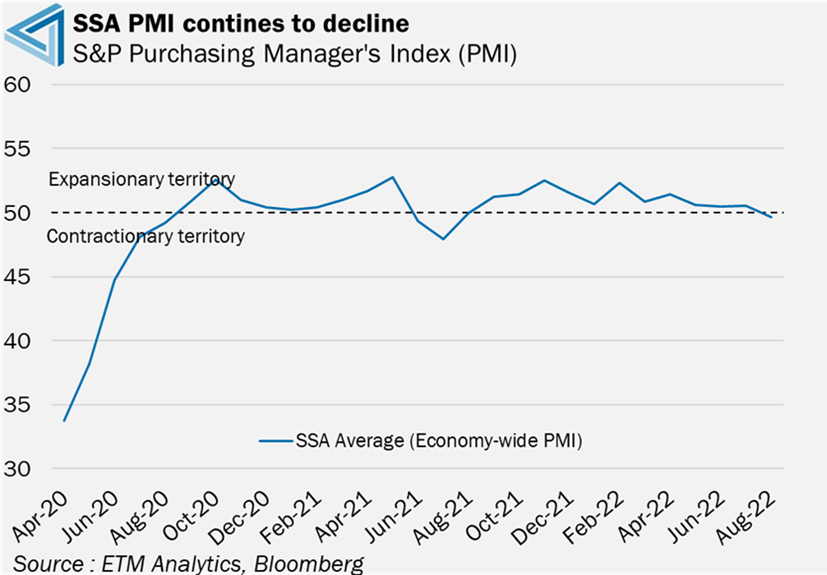