Unrest in Kazakhstan more likely results in the completion of the succession to former President Nursultan Nazarbayev rather than a revolution, built on long-standing popular discontent, which upends the authoritarian system.

However, incumbent President Kassym-Jomart Tokayev's call for external military assistance does call into question how entrenched and well resourced interests aligned with Nazarbayev are, including those in the domestic security forces, whether Kazakhstan's success in maintaining good relations with Russia, the US, and China is changed by this, and how quickly those troops will leave once order is restored.

Our central case remains that the period of violent unrest is short-lived, but should the disruption become protracted we explore five global implications:

Below we review our thesis on internal regime risk in Kazakhstan and these potential global repercussions should we be proved wrong.

Succession not revolution but situation is fluid

Unrest in Kazakhstan may be driven more by the completion of succession to Nazarbayev rather than the start of a revolution, built on long-standing popular discontent, which upends the authoritarian system.

But Tokayev's call for military assistance to regional allies, when he has over a hundred thousand uniformed Kazakh troops to call on, suggests that deeply entrenched interests aligned to Nazarbayev will not give up their privileged position without a fight or credible reassurances.

A complete upheaval, of the type seen in Iran in 1979, or to a much lesser degree, in Egypt in 2011, for example, needs the combination of:

The first two factors are present but, thus far, the third one is absent.

Tokayev's call for support from, mainly, Russian troops may indicate a shift away from the very successful balancing act that Kazakhstan has maintained between Russia, the US, and China in the post-Soviet era.

Our central case is that this period of unrest passes relatively quickly and Kazakhstan returns to its authoritarian political system.

But, questions over how loyal are domestic security forces and whether the involvement of Russian troops provokes a less neutral reaction from the US make the situation fluid.

1) Nazarbayev partially succeeded by Tokayev in 2019

This was initially achieved by:

The partial transition was not without its hiccups.

On the one hand, in October 2019, Tokayev ceded the power of veto over all senior government and security agency appointments, except the ministerial heads of defence, foreign affairs, and internal affairs, to Nazarbayev.

On the other, in May 2020, Tokayev removed Dariga Nazarbayeva, daughter of Nazarbayev, from her role as Head of the Senate (a position from which she could have succeeded to the presidency and from which she was petitioning for greater sovereign powers to be transferred to parliament).

President Tokayev reduced the increase in fuel prices, dismissed the cabinet (although it is still notionally in place until a new one is appointed), and imposed a partial state of emergency (including shutting down internet access) as a response to the initial focus of protests.

But protests spread, becoming more violent (with fatalities) and breaching the airport and the main city administration building in Almaty and presidential compound in Nur-Sultan.

Popular discontent is not hard to explain given Kazakhstan's consistently poor scores in national governance metrics, but the transition from long-standing discontent and sporadic protest to unprecedented disruption and violence requires more explanation.

Tokayev installed himself as Chair of the National Security Council, thereby removing former President Nazarbayev, who ruled for almost three decades and retained authority despite stepping down in 2019, from his last key institutional role.

He also changed the head of the domestic intelligence service, the State Security Committee, and removed Nazarbayev's influential nephew, Kairat Satybaldy, who was serving in that body's second most senior post.

Reportedly, Nazarbayev became a target of protests as they spread and grew more politicised, but his removal has not stopped protests.

4) But Tokayev calls in regional allies (Russia) to help him

Tokayev branded those elements among protestors who had used weapons, seized the airport and taken over buildings as "terrorists" and "bandits".

This implies that Tokayev is concerned about the loyalty or capability of parts of his policy and military forces – there are 135,000 active military personnel in Kazakhstan (according to Global Firepower). 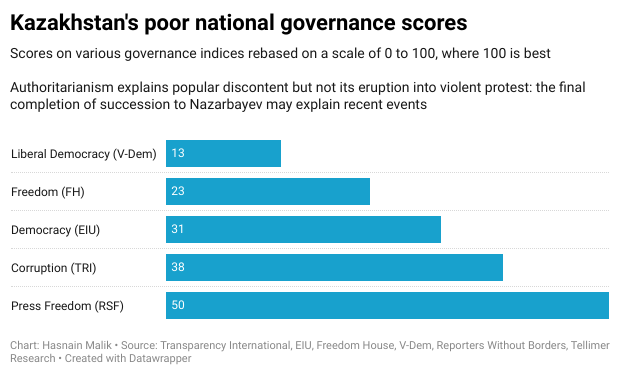 Kazakhstan accounts for 40% of global uranium output and 15% of reserves, more important globally than its output and reserves in coal, oil, and gas (which range up to 3%). Listed Kazatomprom accounts for over 20%.

Reliance on nuclear electricity is greatest in: 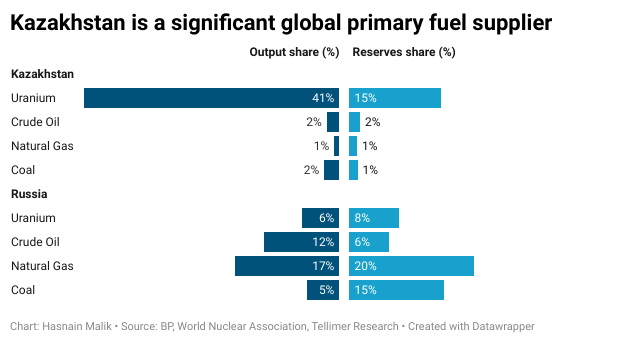 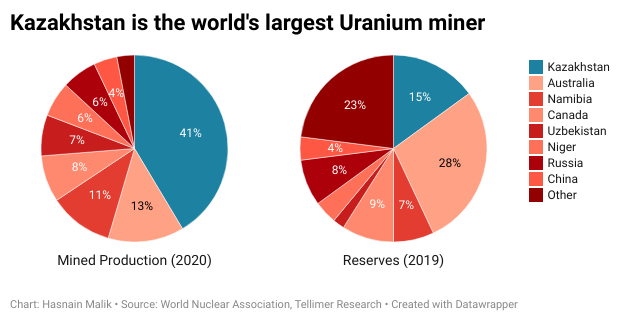 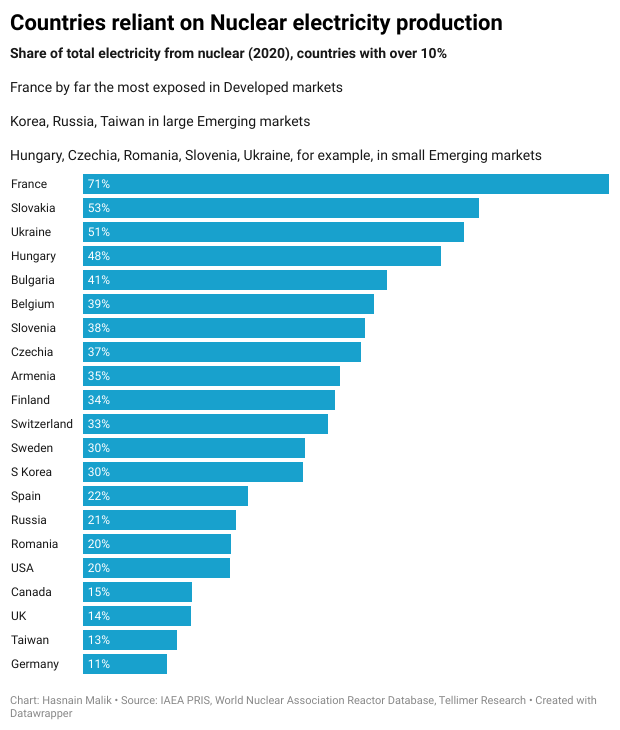 The distraction of supporting the establishment of the regime fully under Tokayev and the deployment of Russian troops to Kazakhstan likely takes away resources from any escalation of conflict in Ukraine, and could offer Putin an opportunistic face-saving way out (if he wants to use it). Of course, at this stage, the resources required for supporting Tokayev are much, much smaller than those required to secure parts of eastern Ukraine, but whether a full Russian invasion of Ukraine is likely in any event is a separate matter.

Alternatively, to the degree that a Tokayev-led government maintains continuity in the Kazakhstan-US relationship, then if Russia helps establish Tokayev's control that may be something welcomed by the US (ie Russia does the dirty work of deploying troops in support of an authoritarian regime that the US also supports, but behind which it does not wish to be seen as supporting the suppression of protestors) and help de-escalate the situation in Ukraine. 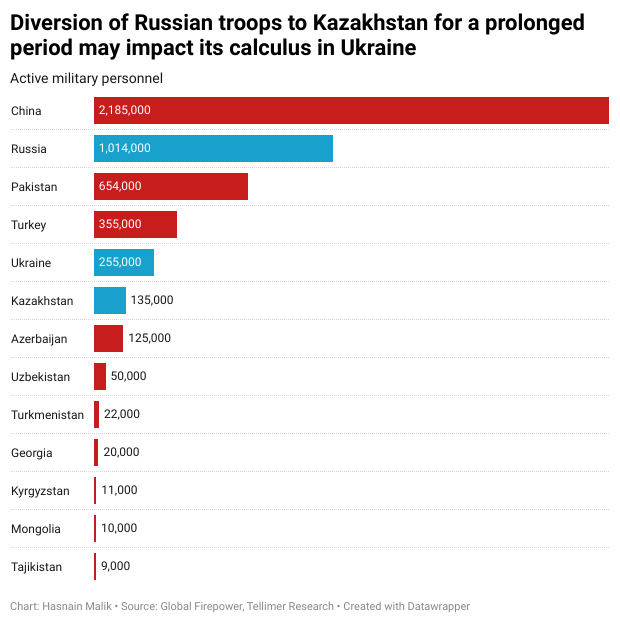 Following the crackdown in China on Bitcoin mining in June 2021, Kazakhstan now accounts for about a fifth of the Bitcoin Hashrate (a measure of the total computing power used to mine new coins and process transactions). Although there are obviously many factors impacting the price of Bitcoin, and, over time, new locations for mining can be established, disruption to another major mining location may be taken negatively. 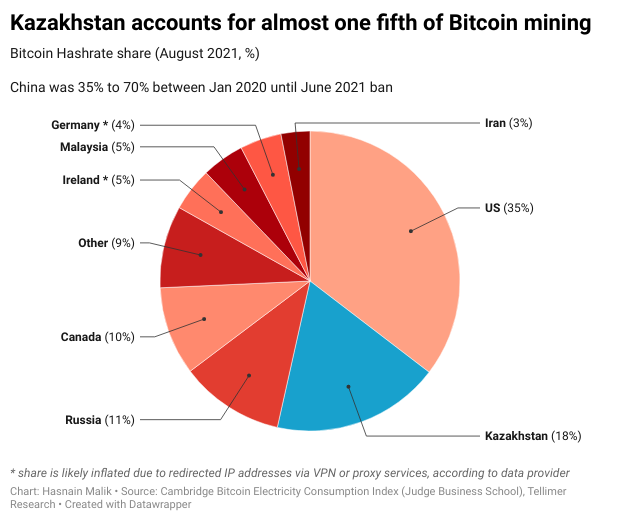 Nazarbayev's model of succession – handing the reins to his appointee, maintaining institutional and de facto authority behind the scenes as well as immunity from prosecution – may have served as a precedent for how Russian President Putin (aged 69) manages his own eventual succession, once his extended term limits expire in 2036. If these protests are not dealt with quickly than the Nazarbayev model may lose its appeal. The same could be said for other long-standing leaders in authoritarian systems, eg Lukashenko in Belarus. 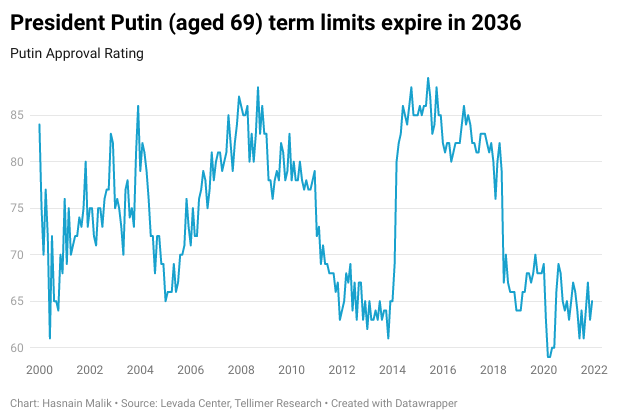 Kazakhstan equities are dominated by Kaspi (fintech), Kazatomprom (uranium), and Halyk (bank) – all listed in London.

Each of these stocks were stellar performers in 2021, particularly for investors specialised in small emerging and frontier markets.

Our view on the cause and outlook for the disruption in Kazakhstan implies that weakness in these share prices should be temporary.