Incumbent President Tokayev unsurprisingly won the 20 November election with ease. Turnout was 69% and his share of the vote was 81%. His term is a single one of seven years, a limit incorporated into the political reforms via a referendum that he championed earlier this year.

For now, the indications are that Tokayev will increase public spend on wages, pensions, healthcare and education – well within Kazakhstan's means given an IMF fiscal deficit forecast for 2022 of 2% of GDP.

He will also continue Kazakhstan's almost unique tradition of balancing China, Russia and the US-EU in foreign policy – a neutral stance that has been tested and preserved through the domestic protests and the Russia-Ukraine war.

Whether he can emulate the sort of economic reform to state-owned enterprises and sovereign wealth introduced in a short time in another commodity exporter with a concentration of political power, Saudi Arabia, remains to be seen. 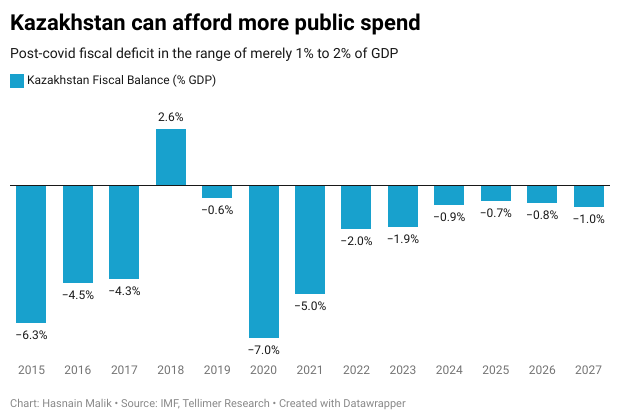 The performance and valuation of Kazakhstan equities, which account for 8.4% of the MSCI Frontier index, suggest that consensus expectations of such a transformation are low.

If there is follow-through on the implementation of long-awaited structural economic reform, eg transport, education and energy infrastructure upgrade (the Nurly Zhol plan announced in 2014) and privatisation (the Comprehensive Privatisation Plan approved in 2020), then the Kazakhstan investment case becomes very appealing. 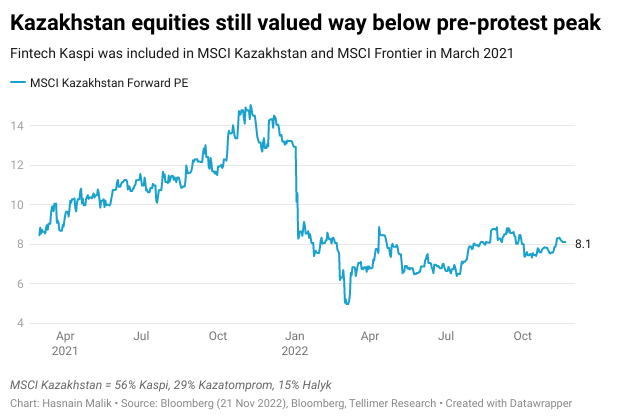 Tokayev until 2029 but political risks remain

Tokayev has already overseen the removal from positions of political and economic power of former President Nazarbayev and his patronage network, following the catalyst of mass protests in January 2022, and the institutionalisation of some of these changes, via a referendum on the constitution in June 2022.

These are changes that have reduced the risks of dictatorship and kleptocracy. But they have not yet established a path to competitive democracy, profound reform of state-owned enterprises, or, at least, Saudi-style reinvestment of sovereign wealth (ie privatisation and the use of the proceeds to diversify the local economy away from raw commodities). 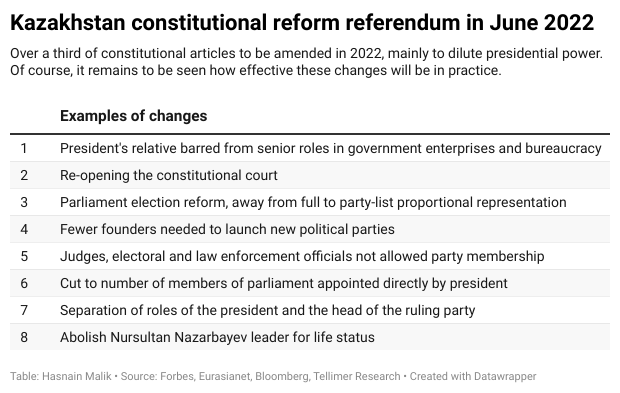 And the risks remain that if he is unchallenged politically then Tokayev might use his authority to craft his own patronage network and push for constitutional change that enables him to continue beyond 2029, or that the vested interests tied to Nazarbayev revive and seek to reassert themselves.

As a result of the concentration of power under 81 year-old Nursultan Nazarbayev, president from April 1990 to march 2019, and the powerful eminence grise behind Tokayev until the mass protests of January 2022, the starting point in Kazakhstan for politics interfering with free market economics is very poor. 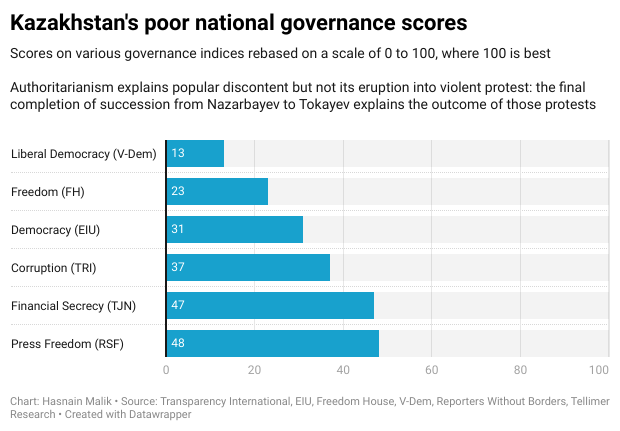 President Tokayev has also demonstrated that, in foreign policy, he is capable of balancing relations with all regional and global powers in the manner of Nazarbayev: