It's all going to get better from here... maybe

After the year that was 2022, and the lost years of the pandemic before that, it is easy to be gloomy: the grinding conflict in Ukraine, volatile politics, climate and pollution challenges, extreme weather events, strikes, riots, cost-of-living pressures, economic uncertainty and the persistence of Covid. Oh, and the hugely over-publicised mental breakdown of some rich guy called Harry Sussex. It is all fueled by a constant stream of woe and selective complaining through the mainstream and social media.

However, looking closer at the reality of what is happening, I would argue we should all be feeling a bit more positive about 2023.

Inflation is coming down

In December, the US Consumer Price Index (CPI) inflation fell for a sixth consecutive month to 6.5% – that is, the CPI basket is 6.5% higher than it was 12 months ago. So yes, the price of a lot of the things we all use and need are more expensive than they were, but that is down from an annualised rate of 9.1% in June. The Fed is likely to need more data (unfortunately higher unemployment) before it takes its foot off the policy brakes, but markets have been cautiously cheered by the direction, regaining some of the ground lost in recent months.

To have the world’s largest economy showing signs of getting inflation under control has to be good news for everyone, everywhere.

And the practical side-effect of this haze of gloom that seems to have taken hold of the markets is that a lot of them look undervalued when compared with their historical multiples.

The chart below, compiled by my colleague Hasnain Malik, shows that some of the largest emerging economies, which were hardest hit by a strong US dollar, supply shocks and inflation, look to be discounted compared with the multiples of previous years. Even the US, with its falling inflation and overpriced currency, is negative on some metrics. 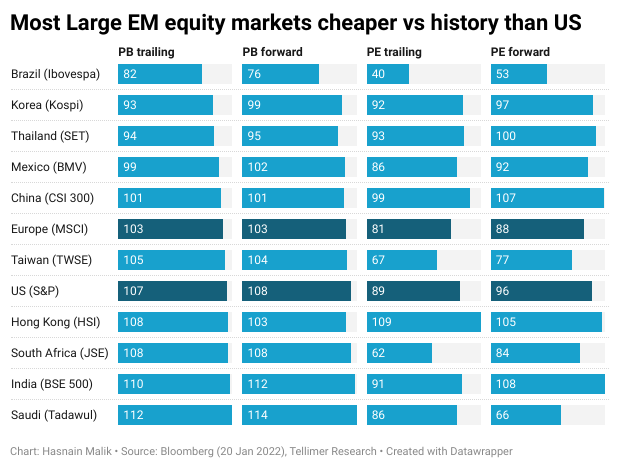 Another great observation from my friend and former colleague Ashwani Mathur, is the striking similarity of current policy and market events to those of 1994 and 1995.

In 1994, the Fed also felt it necessary to raise rates to stem inflation, which had started again in the wake of the recession of 1992/93 and was melting the bond markets. For a year, stock markets bounced along on a mainly negative pattern, until they tilted back up as inflation fell. This is Ashwani’s analysis of the market correction of 1994 and the recovery of 1995, noting the negative coverage in the media, even amid the upturn:

Now, compare it with the current pattern of Fed tightening and stock prices in 2022:

So, it would be hard to say that a recovery is definitely around the corner, but it is an interesting comparison. For all of us, it is worth discounting high-level media nonsense – theirs is an entertainment business – and trying to find some credible sources of perspective to inform our thinking instead: it is out there if you look.

Ukraine could be the 21st century’s Korean War

Despite the ongoing destruction, horror and lack of a clear endgame in Ukraine, it may not actually lead to a third world war. There are striking similarities between the situation in Ukraine and the Soviet-sponsored invasion of South Korea by the communist North in 1950. At the start of Russia’s invasion of Ukraine, NATO was divided and purposeless, the EU at odds with itself and US international leadership seemed frail; nearly a year on, NATO has regained its raison d’etre and will imminently be bolstered by two new members (Sweden and Finland), relationships in the EU are better than they have been for some time, the relationship between the EU and UK has improved because of the British support for Ukraine, and Japan has embraced rearmament and is working with her Western allies in the face of an increasingly assertive China.

If anything, the potential is for the conflict in Ukraine to create a period of international stability in its wake; very much as the Korean War did in the 1950s. That era of stability led to a period of unrivaled economic growth, albeit also a period of global re-armament.

Renewable energy has wind in its sails

One of the ironies of the conflict in Ukraine is that it has accelerated the adoption of, and investment in, renewable energy in a way that 27 meetings of COP couldn’t. It is said that necessity is the mother of all invention and, certainly, that is the case for much of Europe, which is scrambling to reduce its dependency on Russian natural gas.

The UK was actually ahead of the game, having built some of the world’s largest offshore windfarms in the shallow and perennially windswept waters of the North Sea (the shallowest and youngest sea on Earth, only formed by flooding after the last ice age). As of the time of writing (14 January), this is the energy mix in the UK: 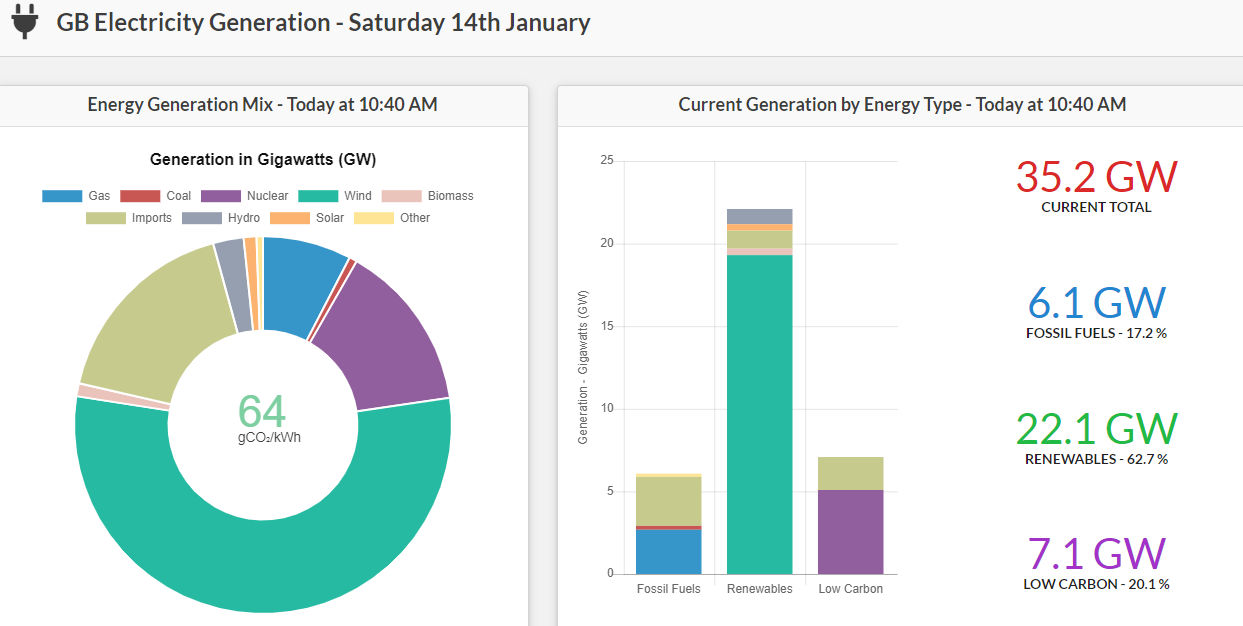 But the UK has some post-Brexit challenges

The fuller impacts of Brexit are now starting to be felt. As the rest of the major economies start to show at least tentative signs of recovery, the UK lags in growth and productivity and has exchanged 'freedom of movement' immigration from the EU – mainly of people coming to the UK to work – for uncontrolled immigration of refugees from Africa, the Middle East and Emerging Europe (nearly 46,000 people crossed the Channel from France to the UK in small boats in 2022, the largest single component being young men from Albania) and Ukrainian refugees (of which c200,000 have been given asylum in the UK).

Such are the shortages of qualified workers and professionals in the UK, the British Medical Association has called on the UK government to loosen immigration rules to allow foreign doctors to work in the UK more easily: at present, 48% of all trainee GP doctors in the UK require an immigration visa. Such is the mess the National Health Service is in, there have even been examples of Ukrainian refugees going back to Ukraine to avoid a wait for a doctor in the UK.

With strikes across the public sector, inflation, lower growth than any other country in the G7, creaking infrastructure, higher taxes, badly run and expensive public services (in the UK, we aren’t allowed to say how dreadful the NHS is, because it is immediately regarded as a criticism of our medical professionals, which it isn’t – they deserve our support – but the NHS is hugely expensive and has many serious organisational defects), an aging population with a disinclination or inability to work beyond 50 and uninspiring politicians on all sides…any recovery may feel a little slower in arriving to the UK.