The Istanbul Canal is the latest reminder of both the strategic location of Turkey for commercial and military transit between the Black and Mediterranean Seas, and the deep internal divide in Turkish politics between the AK Party government – led by President Erdogan – and the opposition. It is a reminder of why foreign powers like the US, EU and Russia will simultaneously compete and cooperate with Turkey and also why, in the absence of better economic conditions to guarantee his electoral clout, Erdogan will paint any internal criticism as coming from those who threaten national security. The valuation of Turkish assets should continue to build in a buffer for these political risks, which are both external (eg sanctions, military spend) and domestic (eg populist interest rates, authoritarianism). 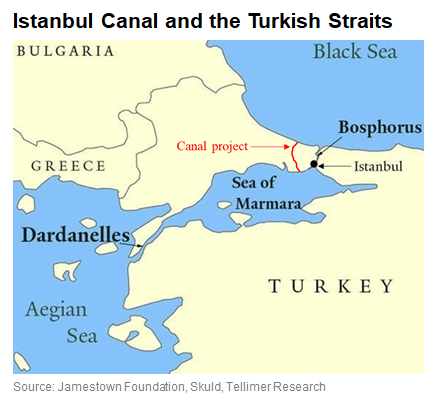 Geopolitics of the Montreux Convention

Readers of a certain age associate Montreux with a music festival. Those involved in Turkey's security and geopolitics think of the 1936 Montreux Convention. This gives Turkey control of (ie the ability to fortify militarily) the Turkish Straits (Bosphorus and Dardanelles), chokepoints of water that connect the Black Sea, via the Sea of Marmara, to the Mediterranean Sea, allows for free passage for commercial civilian vessels in times of war and peace, and regulates the quantity, time spent and capability of military ships that transit through them.

The Istanbul Canal would run parallel to the Bosphorus Strait and relieve congestion (presumably at a cost to shippers in return for access to this faster lane). But, according to Turkish authorities, it would not fall under the scope of the Montreux Convention. Development plans for the Istanbul Canal were approved by the Turkish government on 27 March.

The Montreux Convention was agreed at a time when the UK and France saw an interest in supporting the USSR's concerns over control of the Black Sea, under threat from the alliance of Italy and Germany, but also sought to restrict any incursion by the USSR into the Mediterranean Sea.

Alliances have changed in the 85 years that have passed since then, but the strategic importance of the Turkish Straits has not. Today, the Montreux Convention limits the strength that non-Black Sea navies can project (ie the US and NATO-ex Turkey) and preserves Russia's dominance. The importance of the Turkish Straits as a global trade chokepoint is also key: 2.5% of global oil trade and 23% of global wheat transits through the Straits. 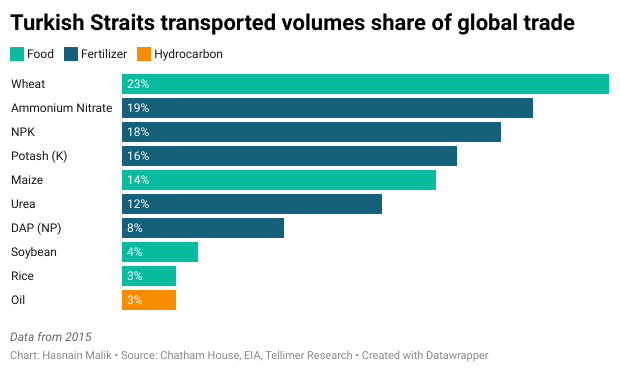 Two public statements released in Turkey in the past few days, signed, respectively, by 126 retired Turkish diplomats (on 2 April) and by 104 retired admirals (on 4 April), criticise the proposed exclusion of the Istanbul Canal from the Montreux Convention. They warn that this could ultimately lead to a loss of Turkish naval sovereignty (ie foreign powers will challenge Turkish control over military transit through the new canal and re-open a wider revision of the Montreux Convention).

The government could have responded to this criticism directly; eg by arguing that the Istanbul Canal might give Turkey better leverage in its relations with foreign powers, whether on the US-NATO-EU side or the Russian side, or by pointing to the fiscal revenue and foreign currency benefits like the Suez Canal. However, the government has instead drawn parallels between these public statements and the attempted 2016 coup, the three military coups between 1960 and 1980, and arrested 10 of those retired admirals.

The context for this is the long-standing competition within Turkish politics between the more secularist, Ataturk-sympathetic ("Peace at home, peace in the world"), European-leaning, urban Istanbul and Izmir-centric, older political elite, and the more moderate Islamist, forthright foreign policy, rural Anatolia, AK Party government led by President Erdogan (aged 67, leader since 2003, and winner of 53% of votes in the 2018 presidential election). The next Turkish general election is due before the end of June 2023.