Yesh Atid leader Yair Lapid, the main rival to outgoing Prime Minister Benyamin Netanyahu of the Likud party, announced on 2 June that an agreement had been reached to form a “Government of Change” that would end Netanyahu’s 12-year period in office. Lapid’s coalition is highly fragile, with 61 seats in the 120-seat Knesset (Israeli parliament), and comprises eight parties: Yesh Atid (17 seats), Blue and White (8), Israel Beitenu (7), New Hope (6), Yamina (Rightwards; 6), Labour (7), Meretz (6), and, unprecedentedly, an independent Arab party, Ra’am (4). It will also be only the second Israeli government led by a centrist party (after Kadima in 2006).

Importantly, to secure the support of Rightwards leader Naftali Bennett, whose party’s representation in parliament has fallen from seven to six after one defection, Lapid has accepted a rotational arrangement in which Bennett will serve the first two years of the four-year term as prime minister while Lapid serves as foreign minister. 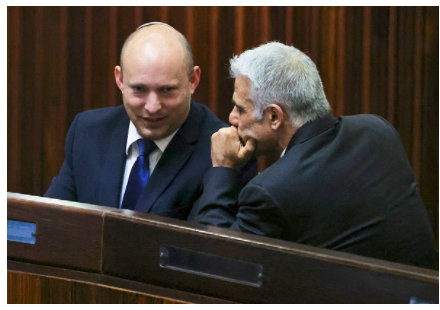